posted 11 years ago
So I've lived in places where it gets about 15 to 20 inches of rain a year.  I could leave logs out propped up on branches.  They would get rained on, but after a year, they would be plenty dry and ready to use.

And now I'm in a spot where it rains 60 inches a year.  Double that of Seattle.

So I have a few projects that could use full size logs and I have several green trees I could use.

I'm thinking I could drop the trees, stack them, and put something over them to help keep most of the moisture off.

I have two ideas:

355)  Rather than cutting the tree down, girdle it.  The tree will die and remain standing.  It will then dry over the next several months.  On a dry day, I can cut down a dry log.  The tree will dry faster when it is vertical.  And less rain will hit it when it is vertical.  In fact, most of the rain will hit its bark and run off - the bark is gonna come off later anyway.

Since I have never heard of anybody doing this sort of thing, I figure there is probably a good reason why and I'm being a fool for even considering it.  But I thought I would test the waters here a bit.  Maybe everybody does this sort of thing all the time and I just haven't been paying attention?  What do you all think?

Leah Sattler
Posts: 2603
51
posted 11 years ago
I don't see why it wouldn't work. my goats have girdled and killed a tree before and it is still standing out there getting nice and dry. don't know why they thought that one was extra tasty. they don't bother the pecans.

Susan Monroe
Posts: 1093
Location: Western WA
7
posted 11 years ago
My only issue with girdling them is, do they then become a standing danger, to be blown down at an inopportune time?

Why not wait to fell the trees at the beginning of the dry season (such as it is)?  Doing it six months earlier and letting them sit in the rain (even covered) doesn't seem that it would put you that much farther ahead.

But I don't really know what I'm talking about.  Do you know any loggers or foresters?  Maybe the National Forest Service would know?

Sue
Leah Sattler
Posts: 2603
51
posted 11 years ago
the standing dead trees might be scary but you can get a good feel of how strong dead trees are by just tapping on them and determining how hollow they are. After a time it would be worth just cutting them down, but maybe it would cut the drying time some at least.

Steve Nicolini
Posts: 224
1
posted 11 years ago
Wood takes quite a bit of time to dry out.  If you wanted to build a structure in the dry season, I think it would be wise to fell the tree a few months before, cover and start drying your logs.  Covering them with a sturdy, efficient cover is necessary.  A blue plastic tarp would be questionable.
Mike Oehler
author
Posts: 60
Location: Bonners Ferry Idaho
1
posted 11 years ago
It's going to be "iffy" for you, Paul, if you plan on building with those logs this year. Unseasoned wood has a reputation of shrinking though when I've pushed it so far I haven't had any real problems. Not yet. To hasten the curing drop the tree soon as possible, buck it to length (a foot longer maybe to allow for error) peel it with a draw knife and make sure if covered (it must be off the ground) there is still air circulation. Flip off the covering on sunny days. Logs that dry like this "check" -- develope serious looking cracks but that is not considered by professionals to be a cause for alarm. Trees peel much easier right after they are dropped especially in the spring when the sap is running. Woe be it to the guy who has to peel a lodgepole pine after the tree has seasoned. On some trees like cedar the opposite is true: the bark will practically fall off after several years. My only quarrel with hardwoods is that many of them are more crooked than the soft woods. In that case I'd use bigger diameter trees have somebody mill then into posts and beams for me, or do it with something like an Alaskan Mill.

I know that you recommend charring the wood before sticking it in the dirt.  I just had another thought along these lines:  that might also get the wood to shrink just a wee bit more - so the odds of it shrinking after the install are reduced.  ??

In fact, if any moisture manages to get into that wood, then it would swell and make the structure stronger?

Brenda Groth
pollinator
Posts: 4437
Location: North Central Michigan
26
posted 11 years ago
if you are cutting deciduous trees, cut them in winter when the sap is down and out of the trees, they'll season much faster that way..here in Michigan most people cut their wood in winter for the following year..even if they just cut it and leave it lay.

genearlly the rain hitting the wood won't damage it too much as long as it drains off and doesn't sit...but you could get a large tarp and cover the entire pile..after you crisscross stack it.

careful of clear plastic as it acts like a greenhouse and will just transpire the water back down on the wood.

Joel Hollingsworth
pollinator
Posts: 2103
Location: Oakland, CA
9
posted 11 years ago
Not sure how elaborate you want to get, but you might consider building some sort of chimney to drive air through your pile.  It might not be too hard to run plastic clothes dryier exhaust tubing up a nearby tree (perhaps hooked over a branch to shed rain), and a black plastic covering would take in plenty enough energy to drive it.  You might even use the same plastic as for construction, if you aren't too worried about UV damage from that length of time.
makeshift_kiln.png 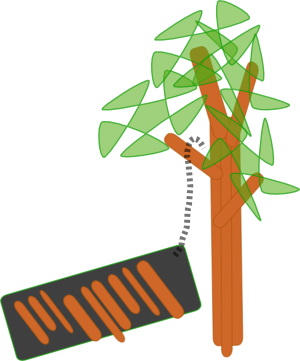 Kathleen Sanderson
pollinator
Posts: 1290
Location: Green County, Kentucky
106
posted 11 years ago
Joel's got the right idea about making sure there's a flow of air over the logs while they season.  If you just drape a tarp over them, or as someone suggested, a pile of brush, there won't be the air flow needed and they are likely to mildew at the very least.

Dale Hodgins
Posts: 9002
Location: Victoria British Columbia-Canada
670
posted 9 years ago
The best time to girdle trees is in the winter. Trees take on a lot of water in the spring and you can interrupt the flow by cutting through the cambium layer. The tree will try to put on its spring growth and will expend much of its stored water. You'll have quite dry wood by July and drying the wood this way reduces cracking.

This effect is even more pronounced with sappy hardwoods like Maple, Alder and Cottonwood. Firewood done in this way dries out faster but also becomes harder to split.
Trees which are felled wet will dry faster if the branches are left on so the tree can continue to transpire. Debarking is more difficult but checking is reduced.

posted 8 years ago
Hey Paul did you ever try this? We're going to be building next year in NE WA, and we're seriously thinking Wofati. Just came across this style today but our #1 inspiration has been the Simon Dale house for several years so I was happy to see it would be well integrated. We're going out to the property in September, so I was just thinking if this worked, might be worth girdling the trees then (or cutting them, but girdling would be less work). We're probably going to start building roughly April-ish.

posted 8 years ago
I now live in North Idaho, but I lived in Louisiana for 18 years where we got 60" of rain.
Lumber takes much longer to dry there. I would haul the trees to my friend's sawmill, then leave it in his pole barn for 2 years to air dry.

Some of the little sawmills stacked their lumber leaning against the trees in a criss cross pattern to allow air flow and to shed water. It worked well, though it took a long time to dry.

One trick we used to speed drying has already been mentioned, and that was to drop the tree and leave the branches on. When the leaves turned brown, we would delimb it and haul it in to the mill.

I have no experience yet with skinning the bark off of trees yet, so I'll defer to wiser and experienced voices on that.

posted 8 years ago
I was a termite treater for a year or two in the 90's. We used a product called Timbor, which is boron based. It is a salt, and has low toxicity to humans. Humans naturally excrete any buildup of it in their body so it does not effect them, but it will kill termites, carpenter ants, etc. We were told it was less toxic to humans than table salt, but do your own research.

One gallon covers about 800 square feet, and it penetrates to a depth of about 2". It will leach out if in contact with the soil.

You can put it in a pump up sprayer and spray it on.

It cost around $80-$100 per gallon. Just do a search on the internet for Timbor and there should be generic versions of it.

I would put your logs up on blocks, spray them down, then let them dry til you are ready to build.

posted 8 years ago
That sounds like borax. We paid €24 for a 25kg sack of the stuff, and I think we mixed it up something like 2 cups per five liters/one gallon.

Burra Maluca wrote:That sounds like borax. We paid €24 for a 25kg sack of the stuff, and I think we mixed it up something like 2 cups per five liters/one gallon.

That reminds me I want to put some in my rammed earth mix, at least the lower portions.

Bobby Smith
Posts: 18
posted 8 years ago
We use borax on the bamboo, but we build with it before it is dry. What is the life of treated wood (if we keep it out of contact with the soil, that is)?