posted 1 year ago
My go-to herbal tea blend is mint and chamomile.  I'd like to grow more chamomile. In general, I find it hard to germinate and fussy to grow in my conditions, but this thread is not about that.  This thread is about the fact that when I go looking for online discussions about growing chamomile, or online sources for seed, nothing matches the herb that I grew up picking and using.

All of the online sources are similar to this one -- they speak of two species, German Chamomile (so-called) and Roman Chamomile.  (Matricaria recutita and Chamaemelum nobile).

The German Chamomile is said to be a tallish herb, growing somewhere between six and 24 inches tall, with frond-ish leaves and white flower petals around the trademark yellow ball flower center.  And it's an annual, albeit a prolifically reseeding one.  This is the one usually harvested and sold for herbal tea.


My problem is that neither of these is the chamomile I'm familiar with.  I grew up on the banks of the Yukon river, zone 1b, in a place that had, when we moved there, about 100 years of history since the first white man built a cabin there.  When we moved there it had no livestock or pasturage, but it had a substantial history of such in its early history, with many draft horses, mules, dairy cows, et cetera, and a lot of fodder shipped in by steamboat.  So every kind of agricultural weed that could arrive in hay or grain, had at some point arrived and had a chance to naturalize.  And we had many other naturalized non-native plants that would grow in any green space maintained as lawn, like "wild" strawberries.  Among these was a chamomile plant that I was intensely familiar with as a little child, because I routinely ate them and picked the little yellow balls to make darts with by affixing them to the heads of foxtail weeds.  Also my mother made me pick them in bulk for her herbal tea jars.

The thing is, this "wild" chamomile was never more than four inches tall, and it never had any sort of white flower petals as both German and Roman Chamomile do.  It just very fine fronds and the yellow balls.  And they were bigger than the balls on German Chamomile.  I can't say if it was perennial or prolifically reseeding; in that harsh zone, reseeding seems more likely.  But it was a very tough plant, a plant of disturbance, one of the first to appear in areas of fresh gravel and disturbed earth.

So, what the heck was it?

My best guess is that it was a sort of local landrace of German Chamomile, probably escaped from gardens in the period of long decline between the gold rush (when the population peaked around 1,000 souls) and the time the population bottomed out at a dozen people in the 1950s.  The stunted growth factor in that harsh climate is no surprise, but losing the flower petals seems... surprising?

I'm just posting this in case there's some answer that's obvious to well-educated herbalists, like "Well, actually, there are sixteen kinds of chamomile in North America, and it sounds like..."  Google has not availed me, but in obscure botany and herbalism, it often doesn't! 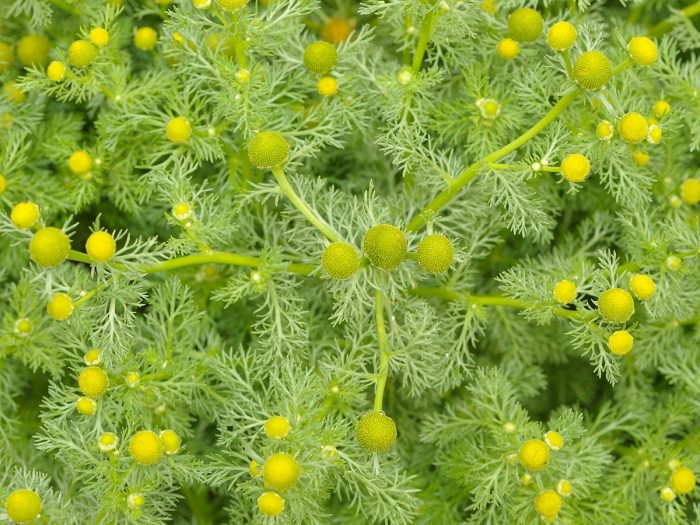 posted 1 year ago
Thank you!  That is 100% the stuff, and you have solved a mystery that has been puzzling my sister and I for the last four or five years.

Here is some more information on Matricaria discoidea from Wikipedia, and everything matches up:


The flower head is cone-shaped, composed of dense-packed yellowish-green corollas, and lacking ray-florets.

I'm used to the low end of that range, but, yeah.


The plant grows well in disturbed areas, especially those with poor, compacted soil. It can be seen blooming on footpaths, roadsides, and similar places in spring and early summer. In North America, it can be found from central Alaska down to...

This is one of those "so relieved to discover that I'm not crazy" moments.  Every time I deal with wanting to grow chamomile, I have this secondary frustration of the fact that what I knew as chamomile didn't match what the herbal world means by the word.   Thanks again!

posted 1 year ago
Awesome! I'm glad I could help. This is one of the first plants I ever really noticed as a child, my dad told me they were "pineapple weed". They used to grow in our gravel driveway in the Okanagan, and I loved the smell of them.
It was only later that I learned they were "wild chamomile".

The Yukon is a magnificent place. I spent a summer in Dawson, enjoying the short but vigorous season of wild edibles. I miss the fireweed. It grows here, but it's not nearly as prolific as they purple fields in the Yukon!

Thanks for the Pie!!!

Hester Winterbourne
Posts: 390
Location: West Midlands UK (zone 8b) Rainfall 26"
79
posted 1 year ago
Pineapple mayweed, in my estimation, is a completely different smell to "real" chamomile!  My herb book says the scent is stronger and far less pleasant, and an infusion is occasionally used for worms and as a sedative!  If you like it, don't try real chamomile or it may ruin your version for you!
Skandi Rogers
pollinator
Posts: 1420
Location: Denmark 57N
403
I like...

posted 1 year ago
I like the smell of pineapple weed but it is nothing like chamomile, it's very common here too and grows in my gravel drive. I think I may have the same book as Hester as mine says exactly the same thing! In the UK we call "german" chamomile wild chamomile.

Does it keep the pineapple scent when made into tea?

Me too! Lovely smell and sweet little flowers, what's not to love!
It grew in the alleys in a small town in Illinois where I spent most of my younger years.

Hester Winterbourne wrote:Pineapple mayweed, in my estimation, is a completely different smell to "real" chamomile!  My herb book says the scent is stronger and far less pleasant, and an infusion is occasionally used for worms and as a sedative!  If you like it, don't try real chamomile or it may ruin your version for you!

This is funny to me, as it illustrates how much in life is about perspective.  To me, of course, it just smells like chamomile; and the thing that's had me worrying at this "problem" for years is that commercially-available chamomile tea tastes weak, muddy, and faintly like straw.  For a long time I just thought it was because it was old and dried-out, and so I pursued growing my own; but the germination requirements of German chamomile (on the surface, exposed to light, but must be moist, never allowed to dry out) are very difficult to obtain under my local growing conditions (hot, dry, windy, intense sunshine).  Obviously there are skilled-gardener ways to solve these problems, but I'm not that great a gardener.  Finally this year I had some success, and have a few German chamomile plants flowering in my herb garden.  Made some tea with the fresh flowers.  Nope!  Still tastes weak and faintly of straw and stems, not the cheerful bright strong fruity flavor that I associate with "chamomile."

Obviously I'm the one who is out of step with the herbal universe, but there you are.

Skandi Rogers wrote:Does it keep the pineapple scent when made into tea?

I have never considered it to have a pineapple scent, but then, I am sure I was eating/smelling it long before I ever saw a pineapple; they weren't much seen in rural Alaska in the late 1970s.  It's fruity, yes, and that character is retained to an extent in the tea.  To me it just tastes like sunshine.  It mixes incredibly well with mint.  There's no better summer tea (hot or cold) for me.

Posts: 27
Location: in the country in southeastern US
11
posted 1 year ago
It was used for tea in the Midwest, too...the old-timers (older than me, and I'm old enough...) said their grandparents used it & dried it for winter use.  They never wasted ANYTHING.  Dried it on screens suspended over the wood burning stove.  The tea ain't too bad.
Stacy Witscher
pollinator
Posts: 845
Location: Southern Oregon
232
posted 1 year ago
We used to use the flower heads to draw on the sidewalks when I was a child. I have lots of it growing on my new property, especially in the gravel areas.

posted 1 year ago
Thank you, so much, for this thread!!! I'm pretty stoked about this stuff! I always loved it, as a kid - we used to call it 'squish-n-sniff', lol. Even though I'm a f&f herbalist, I'd forgotten all about this, and never looked into health uses - now, I get to have more fun with it, add an adult. It's all over the place, here! W00t!

Richard Hartman
Posts: 1
posted 1 year ago
I'm new here,not sure if I have permissions to post links or pictures.

But, if you search, Tripleurospermum inodorum maybe this is the plant you are looking for.

Richard Hartman wrote:I'm new here,not sure if I have permissions to post links or pictures.

But, if you search, Tripleurospermum inodorum maybe this is the plant you are looking for.

Any Permies member is welcome to post helpful links or photos, no worries!

As for Tripleurospermum inodorum, I looked it up and it’s not a match I don’t think — it has prominent white petals, unlike the stuff I was trying to ID. I am pretty sure the pineapple weed suggestion is on track.  Appreciate the help though!

Silvia Stoddart
Posts: 2
posted 1 year ago
For the tea you grew up with, did you harvest just the flower heads or the flowers and foliage? Thanks and here in Ontsrio we call it pineapple weed so well.
Dan Boone
gardener

posted 1 year ago
Just the flower heads and perhaps a bit of associated stem. Whether there was a reason for that or it was just my mother’s preference, I cannot now tell you.

Silvia Stoddart
Posts: 2
posted 1 year ago
Thank you.
Bocca Yi
Posts: 24
4
posted 1 year ago
I am loving this thread. I grew up in Alaska and pineapple weed grew in our gravel driveway.  To me the smell is delicious and transports me to my childhood.

Finally have some growing in my weedy garden and have been harvesting flowers for tea.
Curious though, is it considered medicinal?