What to do with a big, snapping turtle

posted 4 days ago
I went out to my spot yesterday to do a little fishing. I caught a small channel cat and the snapping turtle on skipjack herring.
This very angry turtle had a 3 inch wide head and a huge gaping mouth that I was gonna have to get up close and personal with very soon.
I got my pliers on the hook and did a fancy unhooking move that let him go and left me with my hand.
I didn't think to get a picture of him until he was unhooked, but he was old and gnarly looking. His shell had the classic triple ridges running down his back and I couldn't really see his eyes. I'm sure he could see me!
I've never messed with cleaning, cooking or eating one. I know the Cajuns can make a slap yo mama good soup or stew outa one. They use too much spice for my taste.
I've also heard tell if you keep one in clean, fresh water for a week or so before soup you get the gamey taste out of the meat. Again, that's just what I heard.
So, is it worth getting a large snapper and preparing him for dinner? What has been your experience cooking them? They're so ugly how can they taste good, right? A good recipe that won't light your esophagus on fire would be much appreciated. Anything much more than salt is too spicy for me!

posted 4 days ago
A large snapping turtle like that can be tough but tasty.
Just steam it or simmer it with the bones in for 30-45 minutes.   De-bone, then fry it up with your favorite batter. I like 1/2 cornmeal and 1/2 flour.
Add spices or not to your taste.
Chris Kott
pollinator
Posts: 3769
Location: Toronto, Ontario
535
I like...

posted 4 days ago
I know my dad spearfished them back in the day, underwater with snorkel, mask, and fins, so it's somewhat more sporting for the turtle.

He'd make a turtle soup. The lakes he'd get them out of were clean freshwater lakes, so there was minimal gamey taste already.

You'd be gobsmacked at the number of recipes for non-standard fare that can be found in The Joy of Cooking.

All that said, I won't be eating turtle any time. They take way too long to mature to breeding age, and the open road and commuter fetish has really hit turtle populations. There are literally assholes out there that go out of their way to line up critters whose defense mechanisms involve making themselves small, like armadillos and turtles. on roadways, just to see how many they can hit with their tires.

Now obviously respectfully catching and harvesting one for the purpose of some turtle dumplings and soup, and maybe some klingon cosplay, is worlds away from intentional vehicular biocide; I wasn't suggesting that the two were similar.

But with such population pressures, I feel it's important to look at populations first. I would be much more comfortable if there was an age range or size slot system wherein turtles over a certain age, who'd had several decades to breed and had slowed down, were fair game for wild harvest, in order to protect the breeding population.

If you were anywhere near where burmese pythons have become an invasive, I would try that. There are apparently also large lizards that have become a naturalised invasive in some of the southern states. I would probably harvest those before something that grows and breeds as slowly as turtles.

That said, if you catch one, I wish you the very best of luck with it, however you prepare it. If you could document it, I'm sure I'm not the only audience you'd have.

Joylynn Hardesty
master pollinator
Posts: 3407
Location: Officially Zone 7b, according to personal obsevations I live in 7a, SW Tennessee
1298
3
I like...

posted 4 days ago
Yes, please document it. I suggest that you document it with still photography. Honey was traumatized in his childhood when his brother's newly headless catch ran up his arm. Seriously. Not in this event, but it's been suggested that the detached head can attempt chowing down. Be careful.

Gray Henon
pollinator
Posts: 318
Location: Appalachian Foothills-Zone 7
47
posted 3 days ago
Probably the finest tasting wild critter I have ever fried up.  Never had a really big one, but we pressure cook them for a while to tenderize, then batter and fry up.  Watch youtube for cleaning instructions.  You basically open the seams around the bottom plate, remove the bottom plate, then cut the meat out of the shell.  Lots of fine, tip of the knife, work.  Keep it razor sharp.  Not too hard after you get the hang of it.

Ellendra Nauriel
pollinator
Posts: 579
Location: South-central Wisconsin
219
posted 3 days ago
I have one cookbook that says the easiest way to dispatch a turtle, is to drop it live into boiling water the way you would a lobster.

I've never been able to bring myself to do that to a living creature. Call me squeamish. But, if you're ok with the method, it does look like the easiest way to get the process started. After the turtle has simmered for a bit (I don't have the chart handy showing how long it needs to cook), then you can take it out, rub the skin off, split the shell, debone and declaw it, and use the meat in your recipe. Make sure to remove as much of the yellow fat as possible.

posted 3 days ago
I did a little digging and found that the alligator snapping turtle is protected anyway. I'm glad I let him go.
I'm with you, I can't throw a live creature into boiling water. Now, I'll eat the hell out of something YOU throw in, but I can't.
This ain't the guy I caught, but this is what I caught. 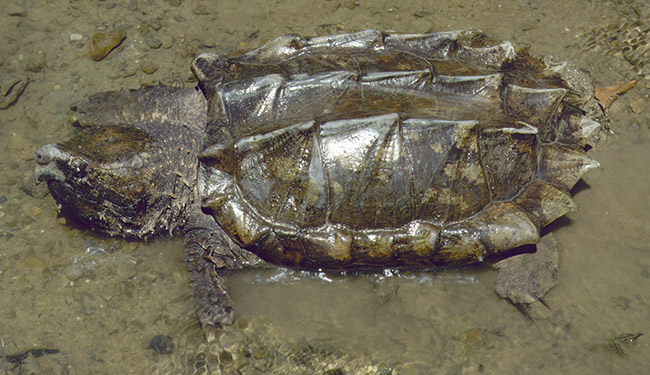