One year of only using a bike in New Jersey

posted 1 month ago
I was just going to post a picture of my lovely cargo bike and a brief into . . . I got a little carried away, so it’s a bit of a long read.

A year ago I was forced to give up driving and it was the best nudge ever.

I moved to the USA summer of 2019. My wife spent four miserable weekends queueing at the Motor Vehicle Commission (MVC) offices - occasionally at the wrong one - you don’t know you’re at the wrong one until you’ve queued for four hours. This was a totally baffling experience. I had moved to the US - the tech capital of the world and here I was, queuing, outside in blisteringly hot heat listening to Guatemalans, French, Australians, Mexicans, out of state Americans and other Brits, wondering if it was all worth it. My wife soldiered on and eventually got her state driving license. I have a UK license and in NJ I could drive for a year.

Now all I needed to do was go through the pain of queuing for a permit for a test and then queuing again to take the test. I decided to wait a bit until the weather cooled down and it wouldn’t be so bad to spend eight hours in full sun. The summer dragged on and then winter arrived! In two weeks it went from 40’C to -10’C - in Fahrenheit that’s damn hot to damn cold . . . And I was in no hurry, I’d do it in the spring and learn all the stuff I need to know for the test. Then COVID closed everything including the MVC. Eventually some branches opened and the queuing system went to a whole new level. I would leave the house at 3 am, drive two hours to join a queue where people had tents. Ten hours later, I’d finally be able to speak to someone who told me that testing was suspended indefinitely. I don’t mean to be disrespectful to my adopted country, all my American friends hate the MVC as well and have far ruder things to say about it.

My year was up and I had no license. I did have bikes though, so I figured this was going to be my new normal.

I’m a kid of the 70’s and the bike was your social network. I cycled to school, I cycled to friends. When I went to University in London, I kept cycling. I had summer jobs as a bike courier. I didn’t have a driving license, I didn’t see the point. It wasn’t until I was 27 and had a job that required a car, I finally learn’t to drive. Once I had a car and a family, I stopped cycling. I didn’t have to live within a few miles of my work. I still rode occasionally, mostly mountain biking but just for fun. Then I quit work, became a stay at home Dad and bought a new bike and a baby seat.

Eight years ago my wife was offered a job in Singapore and as a trailing spouse, off I went. Car ownership there is extremely expensive but it has a truly awesome integrated public transport system of trains and buses. It also has phenomenal infrastructure for walking, cycling, skating, scooting . . . A network of parks and park connectors. I lived way out East and could cycle to the heart of the business district and only have to cross two roads, both minutes from my home.

Taking the dog for a ‘walk’ in Singapore

So when our next destination was New York, I was determined to keep cycling. Due to a series of cock-ups, some bad advice, limited time, we ended up in what I thought was the worst place to cycle, New Jersey. Wow, they like their motorways / freeways / stroads - basically, massive, scary, multi lane, baffling, car dependent, terrifying, potholed, endless strips of tarmac and concrete. Scary and terrifying in a car. There was no way I was going to cycle here. Roll forward two years, and my first anniversary of only cycling has just passed.

My first adventure was on the commuter bike I used in Singapore. I hit a pothole on a cycle path and was flung into the woods at the side of the road. I was very fortunate, the vegetation softened my landing and I somehow avoid any trees or road surface.

This was never going to work

I then decided to use my mountain bike and bought a trailer for food shopping. This was an ok arrangement but I felt very sad for my mountain bike. One friend said it was like hitching a caravan to a Ferrari. He had a point.

What I really wanted was a chunky ebike suitable for the job, so I sold some camera gear and bought a Radrunner and she became my work horse. In ten months, I have made over 300 trips, 99% under three miles. It’s big enough and powerful enough that I can ‘own’ the lane, which is the only way to stay alive on the roads in my corner of NJ. Cycling is so rare here that I’m often treated with a huge amount of respect or just plain curiosity that drivers give me a wide pass, which is nice.

As most cyclists know though, the number of required bikes = current number of bikes + 1. (So long as total number of bikes is less than the number of bikes that equals divorce!).  I had proved that it’s possible to be bike dependent in NJ. I watched a lot of videos, read a ton of reviews and spoke to some folks, before selling a bunch more stuff and ordering a cargo bike. Due to lock down and lack of any bike shops near me and lack of bikes anywhere, I bought a bike without even riding it. I’d done this with the Rad but that was just a bike shaped bike and I wanted a Bullitt - a Danish made ‘Long John’. I had been dealing with Curbside Cycles  in Toronto where my cousin lives, so ordered it from them, knowing that it might take a few months. That was last January and it eventually arrived this month. World container shortages, a big boat stuck in a canal and dockworker strikes all added to the delay. It was worth the wait. Alas, I had planned to sell the Rad to pay for a chunk of the cost but with over 2000 miles now clocked and some wear and tear, it’s lost a lot of value. On the plus side, my son says he wants to use it to ride to school and doesn’t want to go on the school bus, which is an even bigger saving. I maybe getting close to the bikes = divorce number though . . .

So here she is.

I’ve kept things simple, just building a plywood base. I’ve added a cargo net to keep things from bouncing off when I hit the inevitable ‘surprise’ pothole that wasn’t there yesterday.

I drove my car in NJ for a year and no one ever said ‘nice ride’ however, rarely a day goes by that someone doesn’t say something really nice about the bike. I’m occasionally mocked, get told to get off the road, but I can deal with that, the pluses far, far out way the minuses.

Edward Norton wrote:I drove my car in NJ for a year and no one ever said ‘nice ride’ however, rarely a day goes by that someone doesn’t say something really nice about the bike.

I find the same thing. I don't ride my cargo bike every day, but I get positive comments whenever I do. if the setting is conducive to it, I try to let the commenters take it for a spin.

posted 1 month ago
Edward, I think that is an awesome story, and a equally awesome few bikes! Especially the Bullitt!!

posted 1 month ago
I'm glad you shared! Good on you.

And between the two of us: I have also been around the world and done my full share of useless red-tape folderol. Nothing I have seen, not even here in Brazil, holds a candle to the Byzantine horror show that is the NJ DMV. I got my first drivers' license in New Jersey, and it's only just gotten easier from there.
Edward Norton
pollinator
Posts: 434
Location: New Jersey, USA
184
I like...

posted 1 month ago
Thank you! I got apples and pie! As a newbie here, that was very nice and I’ve decided this will be my new home and I’ve already moved in. It’s lovely to find a forum that appreciates long posts.

What kind of bike do you have Tel? My Bullitt rides differently to a normal bike and I was very wobbly for at first. I’m concerned it would put people off if they tried for anything less than a day . . .

Haha Tereza! US Tax filling is a distant second to DMV and crossing from Thailand into Laos by boat is a very distant third.

Edward Norton wrote:What kind of bike do you have Tel? My Bullitt rides differently to a normal bike and I was very wobbly for at first. I’m concerned it would put people off if they tried for anything less than a day . . .

I picked up two, actually. they were used by a local ice cream company for deliveries, but that didn't work out for some reason. metrofiets is the brand. a defunct but well-liked Portland builder.
longboi.jpg 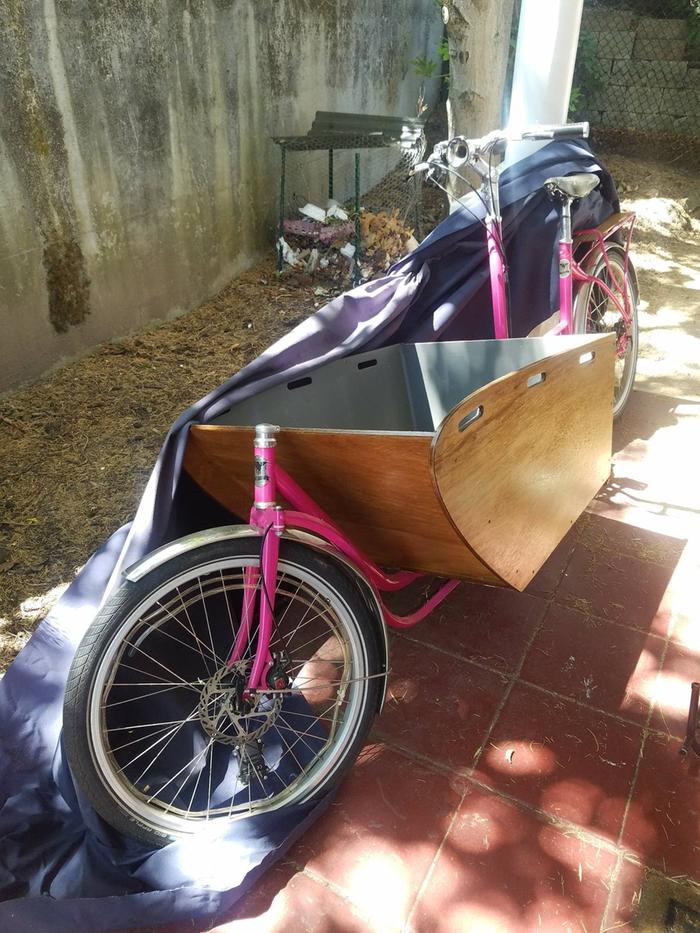 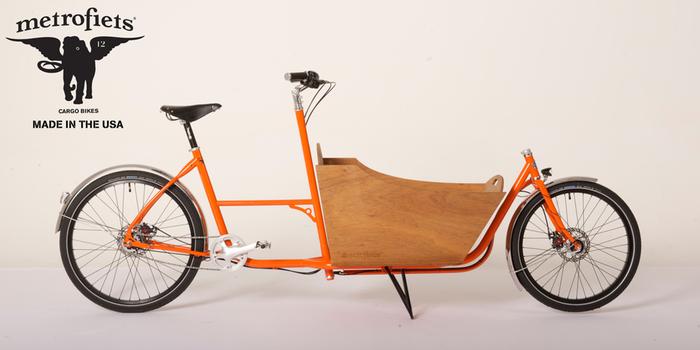 Posts: 3663
Location: woodland, washington
167
posted 1 month ago
and yeah, folks are typically a little wobbly on them. nobody has crashed yet, though!

posted 1 month ago
Great yarn, I enjoyed it.