Emergency quick and small batchbox for the 400 sq ft wofati (0.7)

posted 5 years ago
OK, this is good to hear! As long as you are able to keep the rocket going every day more of the cob in the trench will dry out. It looks like the heat is shifting slowly towards the vertical chimney. I fully expect the draft issue will be back when the .7 has been allowed to cool off for a couple of weeks. As long as the inside of the wofati isn't allowed to get wet the time to baby the fire and wave torches would be greatly reduced. Please report back when the planned test has been run.

I'm supposed to keep the wofati extra warm this week, so I'm burning extra wood. But I'm surprised at how little wood I'm actually burning to get the temperatures this high. I'd guess that I'm burning 12-15 pieces of wood a day to get these temperatures. I think I'll start logging how much I'm burning as well.

As for the 'mass', the horizontal run is now very warm, and the diagonal is noticeably warmer than the surrounding ground. It seems like the batchbox will need to keep running warmly for weeks in order for the diagonal to really heat up well.
paul wheaton
master steward

posted 5 years ago
Any smokeback problems?

posted 5 years ago
I think you should try to get it up to 80 every day for the next four days. Then stop heating it and lets see what happens for the following seven days. 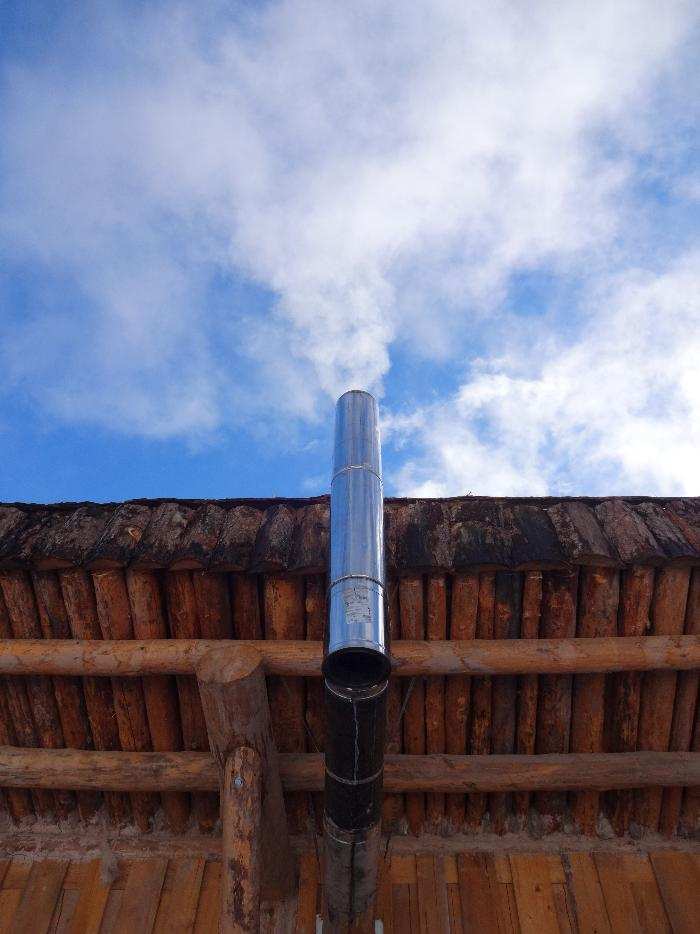 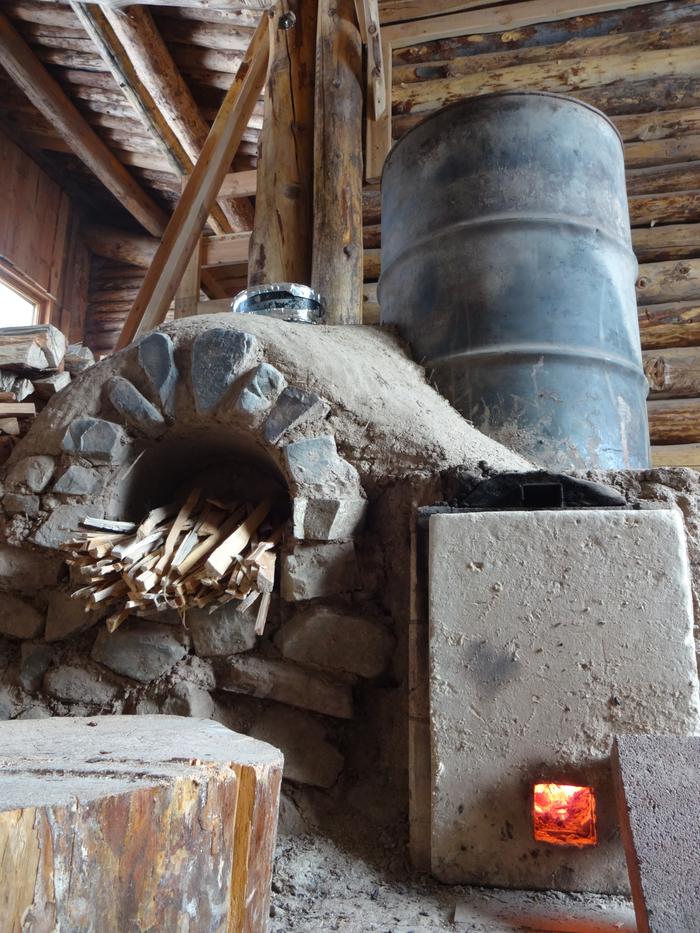 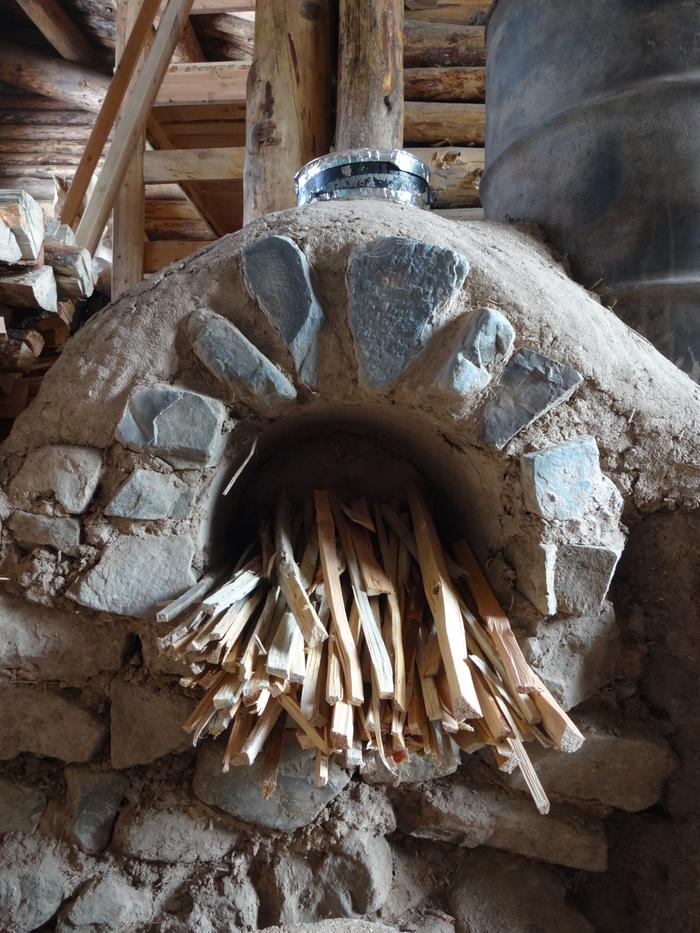 posted 5 years ago
OK then! Exhaust color looks like it's water vapor only, smokeback is over. The periscope is packed around with stones and cob, adding more mass to the exhaust path. The fuel in that hole is kindling only, I presume. Since the last piece of in-floor duct is warming up, the temperature of the vertical indoor stack should also rise now. Could you measure the temps of the stack at a given height of say, 6 ft? During various stages of the burn: before start, during heating up, full tilt and glowing phase?

The whole system is still rather critical I would say but you are running at insane high efficiencies at the moment as long as the gas speed in the port is high. When it isn't, the exhaust color will change to grey or even black.

jesse markowitz
Posts: 151
Location: Hudson Valley, NY
15
posted 5 years ago
Looks like I spoke to soon about the smokeback problems. I've been running it less the last few days for a few reasons 1- its been really warm outside 2- I haven't been around .7 much during the day and 3- the house AND the system's mass were already so warm that it was barely any effort to get .7 up to 80 degrees inside (our goal for the past week and a half).

Because of this, the system's mass has been cooling off a little bit day by day. Yesterday I noticed that the mass and the surrounding ground were the same temperature. And not to my surprise, the system started to misbehave as well. The smokeback problems that started yesterday were not as bad as when I initially moved in, but I do have to now spend a lot of time babying the system, as well as heating the vertical chimney with a propane torch.

Frankly, its kind of nice that the mass cooled because when it was warm .7 was TOO HOT. The house would get up to 87 degrees! And I don't mean that it would get to 87 and then drop down into the 70s, I mean that it would stay in the 85-90 degree range for HOURS. On some days just an hour and a half of fire would get the temperatures this high. Maybe this is evidence of how well the Wofati can trap heat? It was impressive to see that the wofati could hold something like a 55 degree temperature difference for hours.

Posts: 3124
Location: Upstate NY, zone 5
155
posted 5 years ago
Sounds like a shorter flue path eliminating the zigzag would be for the best in a continuously occupied place. Not so much heat put in the ground, more left for the chimney, and less friction in the system.
Glenn Herbert
gardener

Posts: 3124
Location: Upstate NY, zone 5
155
posted 5 years ago
I had a thought about the external chimney. I understand not wanting to penetrate the roof membrane over the living space, but how feasible would it be to go out and immediately up, making a penetration or even an open ring of space in the overhang? The membrane could be pushed up around the penetration to keep most drainage away from it, and there would be any number of ways to shelter it at the top, not to mention that being near the upper edge of the roof slope, there would be minimal waterlogging of the soil. If this works, the lower chimney could be loosely boxed in to further reduce the cooling it gets.
Peter van den Berg
gardener

Glenn Herbert wrote:Sounds like a shorter flue path eliminating the zigzag would be for the best in a continuously occupied place. Not so much heat put in the ground, more left for the chimney, and less friction in the system. 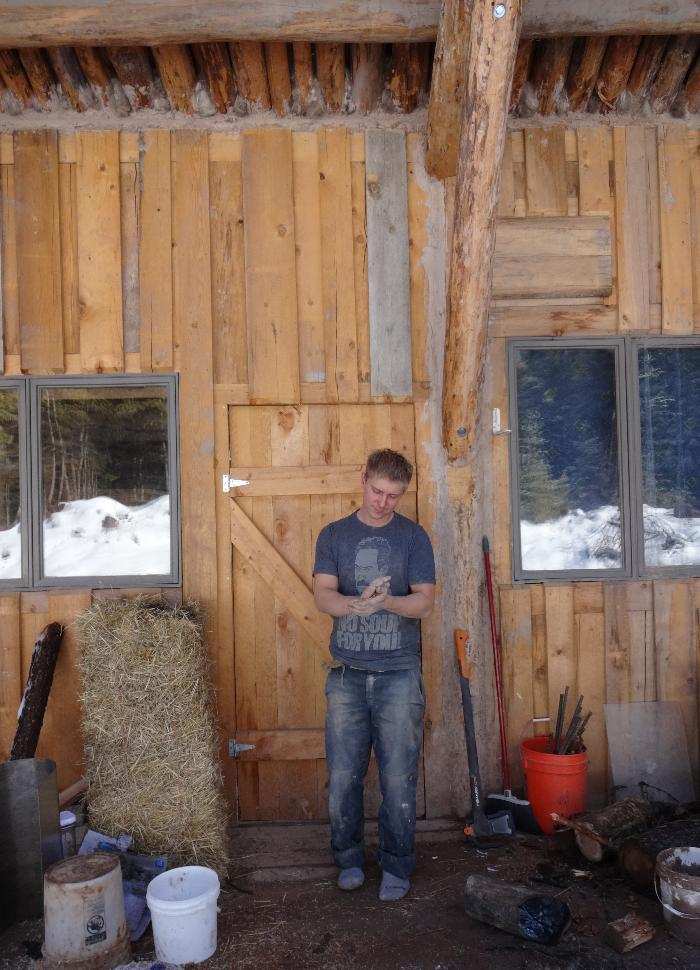 Posts: 3268
Location: Southern alps, on the French side of the french /italian border 5000ft elevation
163
posted 5 years ago
Well, just dug some mud up! Huh, no thread up!

Any news of this thing then?

posted 5 years ago
On Tuesday October 6, Paul, a couple of the innovators and some of the other participants evaluated the solution to the heater niggles in the tipi. The conclusion seems to be the higher gas velocity, caused by the replacement of the vertical chimney stack right next to barrel solved the apparent smokeback problems. After that the whole party moved to the Wofati 0.7 which is now called Allerton Abbey, by the way.

The heater there has been very troublesome from the outset due to low vertical stack temperatures, but the tipi solution wasn't really applicable. Mainly because of the rock hard earthen floor and the fact that the heater needed to be rebuilt for a large part to achieve the desired results and also time constraints. A quick fix of the heater defiancies would be a barrel on top of the existing one and a black 6" stovepipe from the manifold cleanout to the chimney opening high in the opposite wall.

On Friday 9, afternoon Don and I took some tools, a burnt out barrel, two 8" to 6" reducers, an elbow and some lengths of black stovepipe up to the lab and did the fix in a couple of hours. We did cut out the top of the existing barrel and placed the other one on top. Without altering the riser so the top gap was extended by as much as the barrel height. We mounted the two reducers and the 6" pipe between the cleanout and the opening in the wall and that was about it.
After that it worked right out without as much as a hiccup and the Abbey got quite warm that day. Sadly, the triple wall outside chimney wasn't mounted correctly before so the 8" side of the reducer was in contact with the planks of the wall. Much to Paul's dismay when I reported about the proceedings because this could lead to scorching and burning walls in the depths of winter.

On Saturday I found a solution, told Paul on Sunday morning how it could be done and Randall and me got it fixed on Sunday afternoon. In essence, we used a short piece of black 8" stovepipe to extend the reducer, put a 1' piece of 6" pipe in the 8" side of the reducer and filled the space between the inner and outer pipe with 1" of superwool blanket. Now the insulated piece was shielding off the pipe from the wall, acting as a thimble. We ran the heater and the difference was quite significant. One foot from the wall the temp of the pipe got up to as much as 180 F and 2" from the wall it remained room temperature.

I would reckon the mass of the Abbey could be charged with the heat from the batch box provided this would be fired every day for weeks on end.