Thomas Black
Posts: 40
Location: Pensacola, Fla zone 8b
6
posted 1 year ago
Caesar, I think you’re right. You posted earlier about eBay seller “Uncle Chan” selling D. alata as D. esculenta. Well, a while back, I purchased a purple D. esculenta from an eBay seller in Thailand and when it finally sprouted, it wound up being Ube, a purple D. alata. Anyway, about 5 months ago I ordered D. esculenta from Uncle Chan and it finally arrived today. It’s purple and it’s already sprouting. I’m not 100% yet but, here in about a week or two, after it grows a few inches, I’ll know if it’s an Ube also. Oh well, it was worth a shot. I was really looking forward to that being a D. esculenta. The only one I have just woke up from a 4 month sleep about 3 weeks ago and is, so far, my least vigorous Dioscorea.
Caesar Smith
Posts: 42
Location: Puerto Rico
10
I like...

posted 1 year ago
Thanks for the recommendation Lorinne. I still haven't gotten one, so I'll look into it.

D. esculentus is one of my thinner vines, but don't let that fool you, they're tougher than D. esculenta vines, not frail.

My Saipan Purple has been churning out bulbils, so I figured now is a good time to taste them. To avoid poisoning myself – or confirm its toxicity (it is a semi-toxic variety) – I boiled it three times, changing the water between boils. I had intended on each time to be 30 minutes, but I ended up doing one 30 and two 20 minute boils by mistake. I was tempted to keep the skin, but I figured if the flesh was toxic, the skin would be more so.

I mashed it and seasoned it, ate half first, then the remainder a half hour later (long enough to give me time to adjust, but close enough where toxicity should've been apparent). The smell and flavor reminded me of Yams and Chayote and slightly of Camansi Nut (but much milder and more pleasant than the nut). My father likened the smell to that of ordinary yams.

It's been a day, and no symptoms developed. I figure it's a decent edible variety, provided it's properly cooked. I'm not sure I'd recommend bigger portion sizes (I just ate one bigger-than-apple-sized bulbil), but I have no qualms about eating it again. I wouldn't taste Tefoe Purple yet, though, since that one is almost entirely untested (I'd like to send a sample to a lab, if I knew of one).

Note: This took place after a heaping plate of rice, so I'm not sure if an empty stomach would've given different results.

CV-2, sourced by the same person who gave me CV-1, is said to be superior, but I only have two bulbils at hand, so I'm not sure about tasting it yet. The vine has several more bulbils, but they're still small.

Nonthaburi Yellow died back to the ground. Worried about the possibility of it rotting, I dug up the tuber, washed it, trimmed it, dried it, and bagged it until planting time next season.

I need to think and work long and hard to find a good planting spot for next season. Bulbifera really doesn't seem to like pots... It struggles to produce, and often dies back without a crop. In the ground though, it's the strongest vine I have.

Now that I have some bulbils, I'm going through my list one-by-one, checking in with the interested parties, so if you get a moosage from me, it's probably that.

posted 1 year ago
Amazing collection.  Thanks for sharing.  I'm a huge fan of the Dioscorea genus.  I sent you a moosage.

Just wondering if anyone had any good tubers available for sale?
Si

posted 1 year ago
I’m back, and have replied to all (hopefully... if I’ve missed anyone, message me).

The big producers this year were CV-1 and Saipan Purple. The other varieties fared poorly in pots (first-come-first-served for those others; I’ve kept track of the dates). This year I’ll try to get them straight into the ground. I’ll start shipping this next week.

Stefanus Bulbiferus wrote:hello, I would like to know if you have other varieties of dioscorea bulbifera, if so you can take pictures of the bulbs.

This is a sample of the varieties that bore bulbils this season. I won’t be able to offer all of them, as I will retain some for propagation, and the few that would remain would go to the first interested parties. If any of those varieties remain afterwards, I’ll alert the later interested parties so that they can purchase them.

Edit: I also have loads of Dark Night St. Vincent bulbils (D. alata).
68AE5FA8-A92F-4478-8B19-0611B7069B4F.jpeg
Stefania Giancane
Posts: 6
Location: MILANO ITALY
posted 1 year ago
Hello, I would like to know how many bulbs you have of tefoe purple and Hawaii, because I am interested in buying.
Caesar Smith
Posts: 42
Location: Puerto Rico
10
I like...

Stefania Giancane wrote:Hello, I would like to know how many bulbs you have of tefoe purple and Hawaii, because I am interested in buying.

Jack Dakin
Posts: 1
posted 1 year ago
Hello Ceasar,
I also live here in PR and I am interested in purchasing some air potatoes from you. Can you send me a PM?
I am looking to establish a forest garden as the rainy season kicks in, perhaps you have some other items as well.
Cheers.
Caesar Smith
Posts: 42
Location: Puerto Rico
10
I like...

Jack Dakin wrote:Hello Ceasar,
I also live here in PR and I am interested in purchasing some air potatoes from you. Can you send me a PM?
I am looking to establish a forest garden as the rainy season kicks in, perhaps you have some other items as well.
Cheers.

I'm growing some bulbils from Oikos for the first time this year and the vines look lovely already. Sadly, they were sold out of the variety I really wanted, every time I looked for 2 years running, so I gave up and bought the ones they did have available, even though they don't produce large aerial tubers. Still, at least I've got some growing. I can add other varieties in future years as I get my hands on them.

It's very exciting to see this movement to improve, share and cultivate this perennial starch. Keep up the great work and I hope I'll be able to join you in sharing out bulbils in a few years!
Greg Martin
steward

Sadb O'Conner wrote:Sadly, they were sold out of the variety I really wanted, every time I looked for 2 years running, so I gave up and bought the ones they did have available, even though they don't produce large aerial tubers.


Sadb, what is the name of the variety you wanted?  Maybe one of us can help you.
Sadb O'Conner
Posts: 24
Location: Central Virginia
6
posted 1 year ago
I was hoping to get their large aerial tuber variety, which they call Ranger:

"Ranger: Heavy producer of  larger than average aerial vine tubers up to 1 inch in size in clusters.  These are harvested in September. The roots are typical of the species up to 6 inches long."
https://oikostreecrops.com/products/perennial-vegetable-plants/edible-roots-bulbs-tubers/chinese-mountain-yam/

But really I would love to grow any large aerial edible variety, especially since our garden is part of our agritourism/educational showcase for permaculture mentoring.

I'd be delighted to plant any spare bulbils folks have on hand, though of course this is probably the wrong time of year for any to be unclaimed. But there's no rush; I'll definitely check back on this thread later in the year for harvest season and see what folks have available to sell, swap or share.

posted 1 year ago
I picked up and planted some large aerial tuber varieties last year including Ranger and can hopefully help you out in the fall if you can remind me with a PM in September.  They didn't do anything aerial tuber wise that first year, but perhaps this year!  Fingers crossed.

Sadb O'Conner
Posts: 24
Location: Central Virginia
6
posted 1 year ago
Thank you! Will do.
Rowan Tyr
Posts: 3
posted 1 year ago
these seem pretty neat! Anyone have or know a Canadian source of the non-toxic varities? Tubers crossing the border is iffy at best.
Jason Tibbetts
Posts: 1
posted 1 year ago
Caesar! I have been trying to do my own research on differentiating and sourcing Dioscoreas (particularly edible bulbiferas) ever since I read Toensmeiers book. Your info here is quite a goldmine. You said you have shipped to Arizona before. Have you gotten any feedback on how well they have done? I recently acquired a few ‘Hawaii’ bulbils that I was nervous I lost until they finally came up about a week ago. Arizona gets so hot in the summers that I am planning on providing them some afternoon shade. I know that I would be on a waiting list, but would love to test your CV types. Let me know when you have some available and when shipping gets back to nearly normal. I’ll see if I can come up with something to share.
Anthony Dougherty
Posts: 23
Location: All Heavenly Hosts Homestead - Maine, zone 5
2
I like...

posted 11 months ago
Well I'm up here in Maine, zone 5. If y'all are willing to send me some plants or bulbs I'd love to test cold hardiness!

That purple one is beautiful!

“Increase and multiply, and fill the earth, and gain dominion over it, and rule over the fish of the sea and the birds of the heavens and all the livestock and all the earth and all the creeping things that creep upon the earth.”

Lif Strand
pollinator
Posts: 158
Location: New Mexico USA zone 6
25
posted 11 months ago
Now that pandemic restrictions are easing up, is there a way to trade for air potatoes?  And does the trade have to be plant related (I'd offer a book I wrote!)

Also, I'm reading up on air potatoes (sorry, should have done this sooner) and wonder if Dioscorea bulbifera is preferred in some culinary or cultivation way vs  Dioscorea alata (purple yam)/  I've got a yam sitting in water hoping for slips but it's a grocery store yam.  I'm just growing it for the foliage.

Hi, I hope all is well. I haven’t seen a post from you in a while. If you have any Dioscorea bulbs I’d like to trade with you again. Either way, get back up with me and let me know. Thanks, Thomas.
Kurtis Sparrow
Posts: 1
1
posted 3 months ago
Wondering what type of air yam this is. I found this growing in Fairhope Alabama.
A886C2EF-38ED-47A5-A2D9-FC6C472D2F8C.jpeg 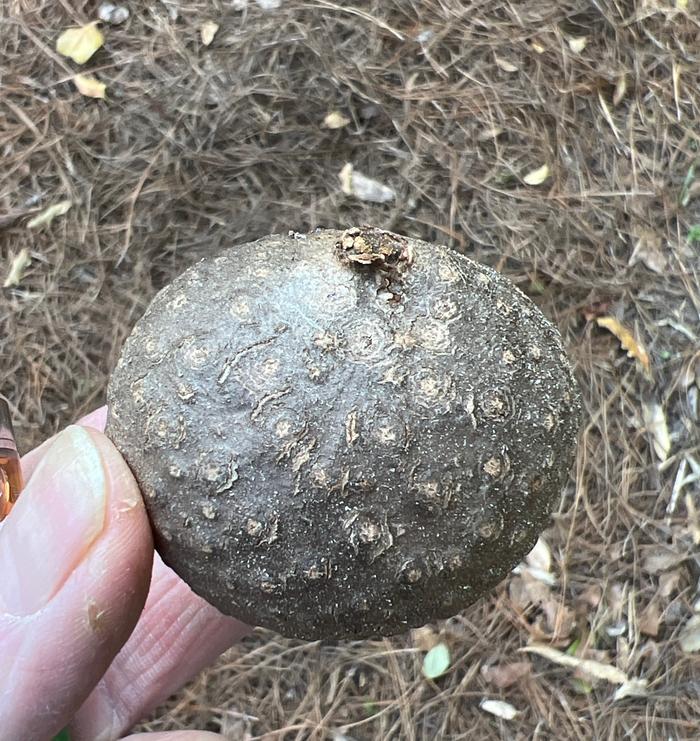 posted 3 months ago
Welcome to Permies Kurtis!
Wow! that looks huge! I've no idea. If no one here knows, I would suggest planting it - I've not seen any as big as that, so it could be an easier source of food if it's an edible one.

Thomas Black
Posts: 40
Location: Pensacola, Fla zone 8b
6
posted 2 months ago
Hey Kurtis, I live just around the corner in Pensacola. Anyway, that would be Dioscorea bulbifera, the inedible wild type. Here in our area we have 2 escaped yams, D. alata and D. bulbifera. Alata bulbils are very mishappened looking but both they and the tubers are edible. Although there are edible D. bulbifera, the wild type the you find here are toxic. They are a very ornamental vine though.