Now that would be a very useful idea in my county if a grapevine bridge could carry light traffic and repair its self.
Ben Zumeta
pollinator
Posts: 1013
Location: NW California, 1500-1800ft,
256
2
I like...

posted 5 years ago
I know of a 6ft wide x 4ft thick branch-bridge about 75ft up between two redwood trunks (probably reiterations of the same tree genetically). Coast Redwoods do this bridging more than any other NW conifer I know of, but I have seen maples fused to doug firs 8 ft up, and doug firs to sika spruces 40ft up.

posted 7 years ago
Here is an example of living bridges in India. Any other examples in different climates?

Landon Sunrich
pollinator
Posts: 1703
Location: Western Washington
22
posted 7 years ago
Yes, especially in forests where there are still many interlaced strands of ceder. They form almost platforms. I have seen this work well in draws with alder.

The link is to a company (no affiliation) that does it, but the pictures are interesting to see. Since white willow will fuse just like cedar I wonder if you could make it over a wider distance by planting support beams/trees.

posted 4 years ago
Here is a page about the willow bridge, one year on. 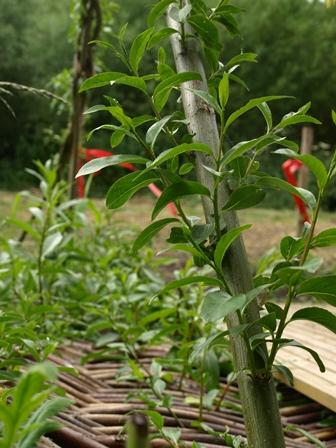 posted 3 years ago
This is one of those things that simply must be done, just for the sake of the 'Coolness Factor'.  Kind of like the tiger trap in disneys 'Swiss Family Robinson' (It's gotta have a tiger in the pit, because, well, that's the whole point!)

When I was a kid in southern california my grandma took me to a park where they had walkways covered with grape vines growing up both sides and over the top, making a layer a foot or so deep.  After running around for a while in the walkways I climbed up on top and started playing around on top.  I couldn't run easily up there because there were lots of small gaps, holes and weak spots (hence in the pictures posted here, the walkways are stone laying on the roots).  It did carry my weight easily, even though it was just an arch.  I was up there for a long time (probably a half hour or more) before my grandma saw me and threatened to beat me within an inch of my life if I didn't get down immediately.

From that experience, and a huge old grape arbor we had behind a house in west Texas, I think one could train grapevines to make a bridge pretty easily.  I would want to run some vines up at an angle to form intermediate supports, like in a suspension bridge if the span was too big, but I don't see a problem if you took about 10 years before you tried foot traffic and laid down some kind of walk way.  Maybe a woven willow mat as the walk way, maybe even rooted at the ends.

It would be even more cool if you intemixed your species, using trees and vines.  Maybe pollarded cottonwood or willow underneath as a support post, growing in the wet low spot, with the new growth from the cottonwood/willow trained outside, around the bridge.

Since a lot of trees, as mentioned by others, will grow together where they touch (especially if  encouraged) you could use cross growing branches to make a kind of grid structure at the sides that would provide a lot more strength for the weight, although I'm not sure how long they have to grow together to gain sufficient strength, (once again, probably a ten year project).
Mike Turner
pollinator
Posts: 474
Location: Upstate SC
77
posted 3 years ago
Look up the term "inosculation", which means stems that can naturally graft together when they are in contact with each other.  Trees that will do this have a thin bark that is easily abraded when they rub together, exposing their cambium layers, which can then fuse together. Most of the time they must be of the same species.  Tree species that will do this include, of course, the Ficus trees shown at the start of this thread.  Temparate zone trees that will do this include willow, sycamore (Platanus), beech, chestnut, maple, linden, elm, ash, olive.apple, pear, and peach.  Vines include grape and wisteria.  These are the plants you need to seek out when planning to create living wood structures.
Greg Martin
steward


I've always thought it would be great to make living bridges like this where you can pick fruit as you walk across, but now I'm thinking it would be fun to make an orchard where you climb or walk though the canopy via the living bridge like walkways....sort of like the elevated walkways at Kew Gardens (pic below) but with living bridges made from the fruit trees. 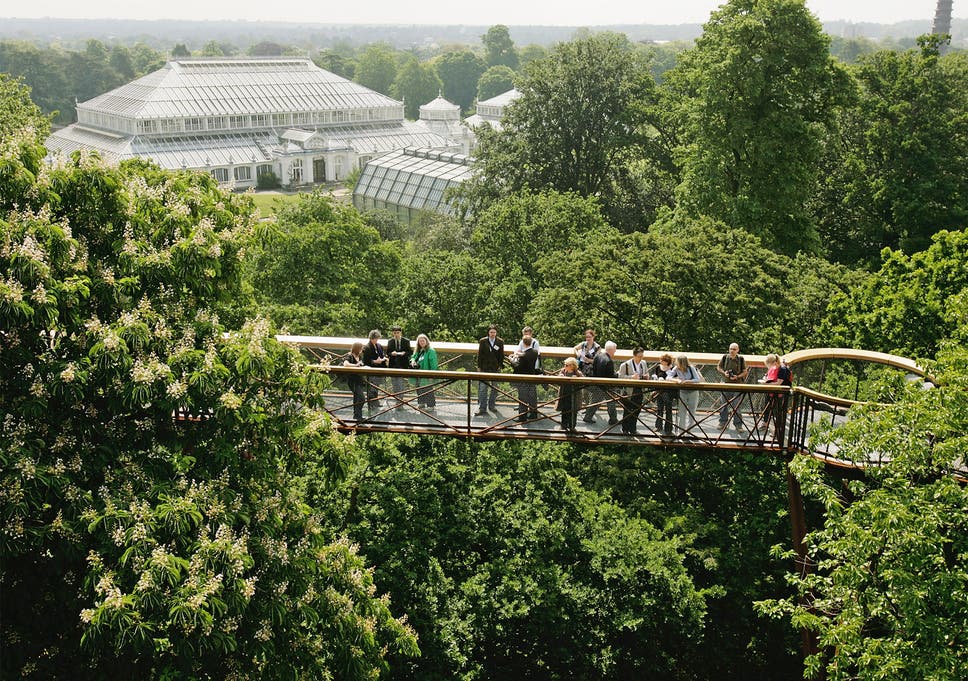 Another thing  that might be fun for tall fruit trees like pears could be ladder grafting to help climb up into the canopy. 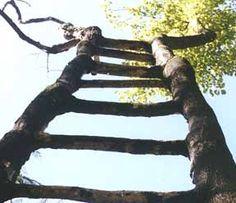 This could make a permaculture forest garden into quite the tourist attraction!


Permaculture...picking the lock back to Eden since 1978.
Pics of my Forest Garden

posted 3 years ago
One concern I have with tying trees together like this, however, would be lack of flexibility leading to the trees breaking in high winds, but if they could be tied together with flexible bridges that might work out.  Maybe living bridges made from grapes or kiwis could help address that issue? 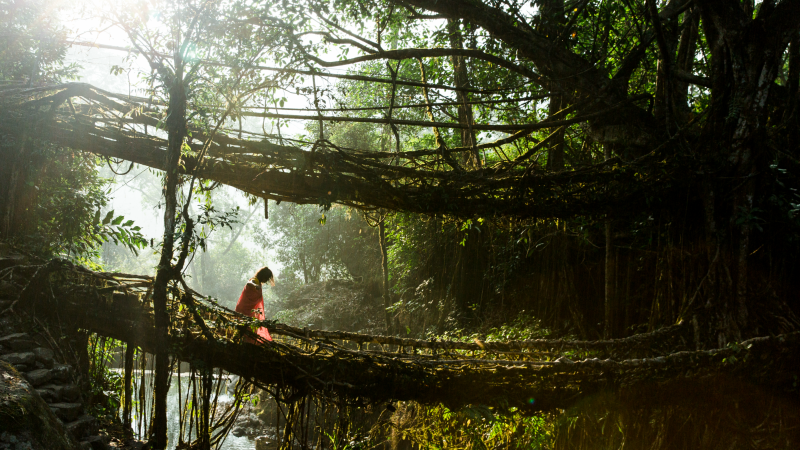 Yasmin Hussain
Posts: 62
posted 1 year ago
The pictures look so surreal to me. I can't imagine going there in person to see that. My mind will be blown away.
M. Phelps
Posts: 278
30
posted 1 year ago
if you made two mini "bridges" with a channel of dirt in them to get the initial root across and established i could see this working with many types of tree
maybe just two logs which have been dug out with a gutter adze
the logs can rot away over time

Paul Young
Posts: 54
12
posted 5 months ago
The post did say they were rubber trees (Hevea in the Euphorbiaceae - euphorb family) which is not closely related to Banyans (Moraceae - fig family), BUT it seems Banyans do seem like excellent candidates AND SO, if you live in a temperate climate such as like southern California (There are nice Banyans growing as far north as San Francisco's Golden Gate Park), Florida, the Mediterranean, etc., AND SO, if you expect a long life, you could probably give it a try and be successful. Perhaps this has been done with Banyans or Strangler Figs somewhere?