posted 2 years ago
I thought it would be neat to make a list of homemade toys, specifically resources for how to make them.  I had some lovely wooden toys as a kid, that an uncle made, which I recall fondly.  Nowadays it seems most people buy plastic toys, which I suppose will last a really long time, but besides being rotten for the environment and containing endocrine disruptors, they get really gross and oily and grimy.

Here is a website with lots of free crocheted toys.  People get very creative!  These are popular in Japan.
Amigurami Patterns (Crocheted Toys)

Here is a page on Instructables that includes many wooden toys including a boomerang, something like a generic Jenga, tic tac toe, a ball labyrinth, toy animals, roller coaster, trains and airplanes:
Wooden Toys on Instructables

This site had lots of different sorts of toys, not all particularly eco-friendly, but many reuse ideas, and a link to homemade playdough, which I think is flour salt and water if I recall correctly...: Lots of Homemade Toy Ideas

I saw another post where someone made a homemade tangram.  I don't know the directions, but this is what the tangram puzzle looks like: Tangram Wikipedia Page

As I was looking online for instructions for more homemade toys, changing my search terms around, other types of toys came up.  Homemade dog toys, homemade rabbit toys, homemade cat toys, and then, homemade sex toys...! :-O

Any more sites with directions for nifty toys?  I used to have a really wonderful little book on how to make traditional toys, I cannot recall the title!  It was a slim book, hardcover, with yellow on the cover.  Had old things like ball-into-cone, the bullroarer American Indian noisemaking toy that you swing, and little wooden dolls of sorts.


Thanks for any additions to this list!  Pics of classic toys would also be awesome.

posted 2 years ago
Also, does anyone know how to make one of these types of slide whistles?  Wooden Slide Whistle example

I'm also fascinated by pottery ocarinas.  I would have loved something like that as a kid...but my mom hated noise, so there you go!  hah

If you had any favorite toys as a kid, please post!


Be joyful, though you have considered all the facts. ~Wendell Berry

posted 2 years ago
I wish I could say I've made more toys, but the extent of my toymaking has thus far been knitting hackysacks. I followed this pattern (https://diagnosisknitter.wordpress.com/2011/07/10/im-so-lazy-heres-a-hacky-sack-pattern/) and knit them in wool, which I then felted just enough to make sure the lentils didn't fall out. To felt it, I used a wire-bristle brush and brushed it under hot water, and then threw the thing in the dryer for a few minutes. It worked great!

posted 2 years ago
I love hand-made gifts, not only toys for children, but all kinds of gifts. I'm from a family with creative genes, we all like making things ourselves.
When I was a child my favourite toy was a knitted stuffed animal, it was called Eeyore; it didn't look exactly like the well-known Eeyore from Winnie-the-Pooh, but I didn't mind. I don't know who made it for me, but it was very well made. Inside the knitted skin was a cotton fabric. Some times there were holes in the skin, but then my mother repaired it (like darning socks), the stuffing never came out because of the fabric inside. I had my Eeyore for many years!

R Jay
Posts: 158
Location: 54 North BC Canada
8
posted 2 years ago
For those kids who want to play outside in a sandpile....http://www.toymakingplans.com/index.php.....trucks,planes,trains, and boats.....
Nicole Alderman
master steward

posted 1 year ago
I recently learned how to make little bendable fairy dolls (Waldorf-style). I was really amazed that I could make my kids their own dolls! Here's the tutorials I used: http://faithandstring.com/fairy-princess-tutorial/ and https://www.themagiconions.com/2010/12/lets-make-flower-fairies.html. Editing to add some more tutorials I found: http://theenchantedtree.blogspot.in/2010/10/new-bendy-dolls-and-tutorial.html and http://treasuresfortots.blogspot.in/2009/10/how-to-make-tiny-fairy-doll.html. It's neat to see all the different ways people make them. Searching through Etsy for waldorf fairies is also a great way to get some inspiration on designs.

And, here's some of my fairies! They're really fun to make! 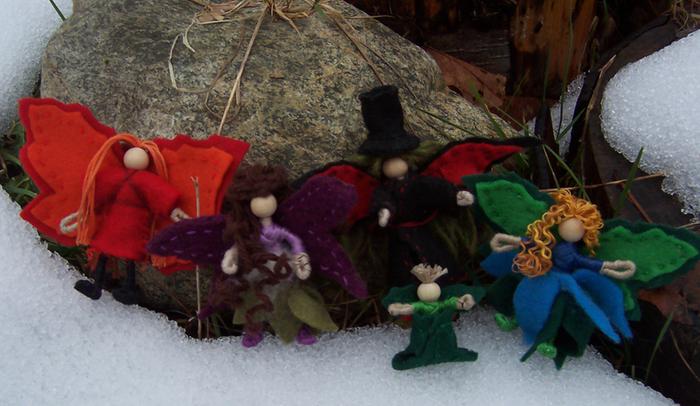 In pdf,epub, and kindle formats

posted 1 year ago
You can find a lot of information on toy making (including books on toy crocheting, wood working, knitting etc) if you start looking in the world of Waldorf Education. Look here for example www.waldorfbooks.com/ clicking into Joyous Living then Children's Crafts or Family Crafts.  You can find a lot of these books online and if you have a local Waldorf school they may offer evening or weekend workshops.

Kat Ostby
Posts: 12
Location: Southwest Wisconsin: Zone 5b: Clay bottomland soil near a river
2
I like...

posted 1 year ago
What a cool thread! I love making little stuffed animals (aka softies) for my kids.  I got the idea from a book called 'Countryside Softies'. I really like how eco-friendly, non-plastic, and unique they are. I've made individual ones for each of my kids to fit their personality's. My oldest got an otter...my son got a skunk, 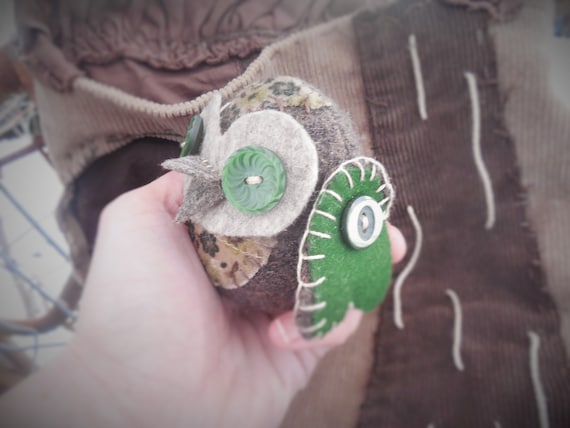 I would highly reccomend the book for anyone interested in making some toys for their kids. The softies have a lovely vintage feel and look to them, and they are a lot of fun to make!

I am a little more primitive than ya all🤣

I found sticks, acorns, pine cones, and pretty leaves wandering in the house and getting used as much as the expensive plastic stuff.

Flowers in the garden and interesting leaves get used when we are out doors about as much as the plastic toys. I had a flowering house plant for a while so my daughter could pick flowers indoors.

With an old rubber band, a stick can be made into a bow or sling shot.  We used those as kids.

White clover makes necklaces. We did that as older kids.

A large branch a sword or staff.  A small one a wand. I've turned these into gifts. I think there's a picture in the homemade gift post in the frugality forum of the wand.

Certain rocks draw and different colors too which is exciting.

A friend had a party and with some willow branches, string, and beads the kids made dream catchers.

A feather is a tickler.

A bin of potting soil must be sealed because otherwise it's too enticing for little arms to reach and feel.

Sticks and  old blankets can turn into a fort.

Gourds and pumpkins are also intriguing.

These things aren't perhaps the most marketable toys,  but -and maybe it's because so much is plastic now- these things are especially exciting.

I grew up with a craft room and have one now.  It's like Thomas Edison's lab.  There's a little bit of everything in there (not mercury tho!) and as kids we were taught basic skills and cautions to use it. When my daughter had friends over, they almost always disappear into that room making things out of scraps of wood, fabric, paint,  etc.  I've heard this is better for brain development than a toy with specific purposes or uses.

As for my teeny fella, he loves looking at house plants and sometimes kicking at the leaves. I guess I could give him a slice of hardwood branch to chew, but we have so many other exciting things and 2nd generation toys,  I haven't seen the point.

I'm bad at instructions for construction, but I guess link over to the homemade gifts in the frugality forum for more stuff like this.

Nicholas Brown
Posts: 9
posted 1 year ago
WOW! I didn't think there are so many people who like homemade toys! Personally I've never tried to do them, but I think, it can be a good thing to do together with my son. He is only 2,9 now, but time passes fast, so I'll bear the idea in mind. Thanks!
Joel Bercardin
pollinator
Posts: 554
Location: Western Canadian mtn valley, zone 6b, 750mm (30") precip
65
I like...

posted 1 year ago
Try clicking on this link...

posted 1 year ago
I've recently (okay, three days ago) started needle felting little toys. Here's the dragon I made for my son. Needle felting is a blast...until you keep breaking your needles. I've broken six so far!

Phil Swindler
pollinator
Posts: 123
Location: Wichita, Kansas, United States
21
posted 1 year ago
I know there are several books on the subject of making wooden toys.  I used one 2 1/2 decades ago while making toys for my son.
I was living near Wichita, KS and picked up a couple from the Wichita library.
As I recall the books ranged from simple enough for a monkey to stuff so complicated Roy Underhill and Norm Abrams would find them challenging.

I know you believe you understand what you think I said, but, I'm not sure you realize that what you heard is not what I meant.

Phil Swindler
pollinator
Posts: 123
Location: Wichita, Kansas, United States
21
posted 10 months ago
I spent some spare time turning old junk into new toys.
I took the cushions from an old sofa that was destined for the dump.
I took a long sharp knife and cut them into brick shaped pieces.
Then they got several coats of latex paint.
We now have light weight, relatively soft bricks for the grand kids to build with when they come over.
It takes several very light coats as opposed to moderate or heavy coats.
Too much paint at once and it just soaks in and wastes paint.
Light coats stay on the surface.
If you have a place to scrounge free paint (which we do) the whole project doesn't have to cost anything but your time.

I know you believe you understand what you think I said, but, I'm not sure you realize that what you heard is not what I meant.