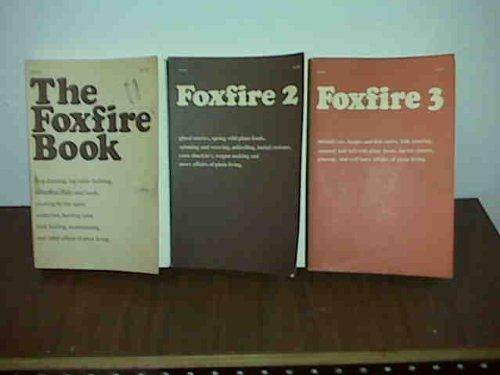 Summary
From Amazon US: For over 40 years, high school students in Foxfire programs have helped to gather and publish information about their Southern Appalachian heritage. Best known for the best-selling Foxfire Book series, the series and the other topical titles were all grown from interviews gathered for The Foxfire Magazine. The success of the student-driven program led to professional research that generated the Foxfire Approach to Teaching and Learning and its support materials for use by other educators hoping to achieve similar levels of student involvement and create life-long learners.

The complete set.
Amazon US
Amazon.au

Individual books in the series
From Foxfire

I started buying these books in the 1970's. I refer back to them time and time again.
There is so much old time wisdom in these books that they are a must have!

Landon Sunrich
pollinator
Posts: 1703
Location: Western Washington
22
posted 7 years ago
I agree these books are darn near priceless. Sometimes they are totally lacking (the foxfire chapter on geese basically doesn't exist) but other times they are totally mind blowing Always a great read. They'll make you want to make a banjo from scratch! Hella Acorns.

Vida Norris
Posts: 114
Location: Ontario Canada, Zone 5b
9
posted 7 years ago
These books inspire a great sense of nostalgia for me. My father had all of these books. He was a homesteader way back in the day, living on 25 acres of land in a small cottage he built which he later converted into our small house. He was a carpenter and did a lot of cool building, including putting a cordwood addition on the house which was to be the room I grew up in.

He was an amazing man whom I dearly miss! When I was a child I did not appreciate the content of these books and then one day as I flipped through them as an adult, I realized how special they really were. What an incredible wealth of knowledge from so long ago. It has this old feel to it that is really unique. Unfortunately after he passed, with all the commotion, the books seem to have disappeared. I really hope to own them again someday. Definitely great books to have on the shelf to dust off now and again and learn something new or remember something old. One million acorns from me!

Myself being an Appalachian boy, these books are priceless on so many levels.
I own every book, including the new books and magazines.

The down to earth stories, the humble 'characters', a vivid crystal ball into some of the toughest, roughest, individuals who have ever lived.
The fox fire series were some of the first books I stumbled across, which may have pointed me in a great direction.

My favorite stories being holidays and parties, recalling corn shucking parties. How the first boy to find a blue ear of corn, gets his pick of the girls to kiss in the room. And the bottle of white lightning in the bottom of the corn pile as the finishing reward.

From processing game, to hair art, fox fire is timeless as much as it is priceless.

With out them, there may have been an entire lost culture.

posted 7 years ago
I give the Foxfire books 8 out of 10 acorns.

When i lived in vermont i had the lucky chance of finding the entire collection at tagsales for way cheap. later in life i handed them forward, but regret i dont have them today. they include valuable back-to-the land advice and stories from real hillbililes that did it long before it was cool.

if you find them at a tag sale, or anywhere else, pick them up and cherish them. pure raw history.
Michael Newby
gardener

posted 6 years ago
I give the series of books as a whole 8 out of 10 acorns.

The series of books is a wealth of information on all kinds of things related to self-reliance and homesteading. I love the insight into how an earlier generation lived and what they thought. There are a lot of specific article in the collection that are worth 10 acorns if not more, but some of the articles leave a little to be desired, hence the 8 acorn rating. Still a solid addition to anyone's collection, especially when you can find them pretty cheap at yard sales, used book stores, etc.

posted 6 years ago
I am going to say this series is a 9 out of 10 acorns. I say this with a condition since the rating is based somewhat on how you choose to use them.

I inherited the first two books of this series from my father. I grew up with them but honestly didn't bother looking at them until I was in my teens. I suspect that it was the uninspiring covers that kept them out of my notice. To be fair, our house was always full of books. Once I did finally crack them open, I was drawn in more than I would have expected.

I made a point of frequenting used book stores to find more of them. It took me years just to get the first five together. I imagine that very few people are letting go of them outside of estate sales, and for good reason.

The first three books are especially useful, having all sorts of information on how things were done in a time and place that might otherwise have been forgotten. Books four and five began to lean more towards the personal story aspect of the works. Book six has always been my least favorite, seeming so heavily laden with stories that I find it hard to draw information out that I can use in my day to day life. Beyond six, I can't yet say. As of yet, I only own that many. Don't worry, that is going to change eventually! I have no doubt that the remaining books are on par with the original six.

I could count that as a negative, but I suspect there will come a time when that book is the most useful one to me. I've noted that as I reach different stages of my life, I take away new things from the books. While much of my library is useful as a reference, FoxFire books are some of the very few that I can revisit over and over in a way that always leaves me with something new.

If I were to measure it solely on the value of information for a homesteader, I would probably bump it up to a 10. For a general audience who is already somewhat interested in the subject matter, I hold with my initial statement of 9. There is a huge value to having the collected memories of men and women who would otherwise be forgotten. An extensive record of how they lived and the shape of their world. Because of that, even if you have zero interest in the subject matter, the books are worth owning and may still manage an 8 in value for your library.
9acorns.png

posted 6 years ago
The first (original) in the series is 1 of the most lovingly worn books that I own. It was a gift to me in the 70s and I've raved about it as a 10 out 10 for decades. I have gotten all of the other books over the years, but continue to grab the original. I have loaned this to dozens of people who have expanded their library (and their minds) as a result. I think it's a must for anyone that is flirting with the idea of changing their lifestyle and worth it's weight in gold for someone sitting on the fence. There must be something to the fact that so many of these homesteaders refused the modern conveniences over their older ways!

If you are looking for some old time common sense and knowledge about homesteading then I recommend the Foxfire series of books.  It is a series of several books with knowledge that has been passed on from generation to generation.   The book contains many different article on a variety of different topics. You will find fascinating chapters on many different topics from moonshine, butchering a pig, log cabin building, or planting by signs to name just a few topics.  The articles are very educational for the historical value.

Each article needs to be accepted for what they are ... a collection of memories.  Sometimes those memories are sharp. At other times, they are rather vague. But, they always hold my interest.

I do find myself liking the earlier volumes more. But then, I like the early Hemmingway more.  These volumes are a national treasure.

Mark A Ferguson
Posts: 3
1
posted 10 months ago
I got the set in the early 80's. Interesting how the stories were collected and a good read for anyone wanting to know how people used to live. I found it helpful for ginseng cultivation and bee keeping. Just the general knowledge is still useful and pops up as I am doing things.
A must read if you are interested in historical farming/living and a great read by the fire in the winter.

Posts: 2337
Location: Cascades of Oregon
400
posted 10 months ago
I love those books they sit on my bookshelf with the very first Mother Earth News magazine. The concept was so intriguing to me interviewing and learning from their older neighbors. Creating a history and how to book at the same time.  I think I noticed a slight instructor or editorial change as the series progressed, still an excellent resource. My daughters fascination with them, mirroring my feelings. 10 out of 10 bushels of acorns.