Sad--I need to mow deer habitat for my daughter

posted 1 year ago
The title pretty much says it all.  My daughter is rapidly developing summer and fall time allergies.  No doubt she got this trait from me as I have very similar allergies.  She is miserable if she goes outside.  And she likes to go outside, but she can barely walk the dog without getting stuffy and sneezing uncontrollably.  She does take allergy medications--the same ones I do--but they do not help her as well as they help me.

So the best way to control allergies is to remove allergens.  In this case it means my 6ish acres of tall grass.  Personally I like tall grass and wild flowers (my wife calls them weeds), but I LOVE the fact that this has become a sort of bed and breakfast for a bunch of white tailed deer.  Right now we have at least one doe, her fawn and a buck that either bed down on our ground at night or at least pass through on an almost daily basis.  The buck is especially notable as bucks are extremely reclusive.

But it looks like I am going to have to mow the acreage.   I do this every year, but this year I will be doing it early (this weekend weather permitting).  Whenever I mow I can find at least 20 places where deer have bed down and i am certain there are more spots I am missing.  I just hate to remove their habitat, but for the sake of my daughter I am going to have to do so.  Fortunately I have 3-4ish acres of woods that I leave in pristine condition, so its not like I am making them completely homeless.  And they have a densely wooded hedgerow that has sort of thinned out in the center that makes a nice concealed deer highway connecting them from the grassy area to the woods.  Again, I love my deer, but I love my daughter more so going this weekend I am sad to say that a lot of deer habitat is going away.

Sad, but has to be done,

posted 1 year ago
Sorry to hear about that,  sounds like a tough choice.

Douglas Alpenstock
pollinator
Posts: 1669
Location: Canadian Prairies - Zone 3b
434
posted 1 year ago
Life is the art of the possible. We do what we have to do, even when it's not our preferred choice.

Allergies make my wife and me quite miserable, and this has been a bad year. Have you looked around the general area for a sudden load of pollen that may be the the primary cause? In our case, local farmers suddenly decided to grow large amounts of canola, which pumps out huge volumes of pollen for a few weeks.

While mowing isn't your first choice, it's not a total disaster, IMO. A mowed lawn can still be great habitat for some bird species, frogs and rabbits. Overseeding with white clover bumps up the habitat quotient. And you have all that biomass to make use of, if you can capture it.

posted 1 year ago
I have actually noticed that the deer almost prefer mowed meadows/pastures. Yes, long grass makes a comfie bed, especially for new fawns, but they will enjoy grazing on the new growth.

bruce Fine
Posts: 1197
56
posted 1 year ago
ive found that some recently mowed spots in my front pasture attract deer, never see them when grass is tall but they actively feed in the mowed areas. not sure what kind of grasses it is they are after but they sure do like it mowed short.
D Nikolls
pollinator
Posts: 1716
Location: Victoria BC
270
posted 1 year ago
As Artie and  Bruce have mentioned, the deer love the tender fresh regrowth that follows mowing; they will likely think this is a very fair trade!

posted 1 year ago
Thanks guys.

I already mow every year and yes, the deer do like the new growth that comes up.  I expect this year the regrowth will be substantial as we have had a very wet year.  What is sad though is that I end up mowing all those places that deer bed down during the summer.  Make no mistake, they will find other places to bed down--we have plenty of wild space for them--but it always feels like I have to tame one more rare piece of wilderness, though small it is.

posted 1 year ago
Is there way you can now around the areas they bed in?  Does this have to be all or nothing?

posted 1 year ago
I've mowed repeatedly for similar reasons and the deer hang out here anyway. Seeing them laying around in various parts of the field and yard is totally common. Release the guilt! :)

John F Dean wrote:Is there way you can now around the areas they bed in?  Does this have to be all or nothing?


I was thinking maybe leave a strip farthest away from the house. And are you sure it isn't just one plant causing it?

posted 1 year ago
One thing we do is mow just before the grass goes to seed. My husband has grass allergies, and as long as we do that, his allergies are under control. This year we only managed to mow the 2 acres closest to our house (life was busy, grass was wet, etc), and that seemed to be enough that his allergies weren't bad. I notice the deer bed down in the top areas where we didn't mow, but also in the woods. And they sure love eating the young grass (and my fruit trees and peas and berries. They've been really hungry this year!).

Actually, I do have to mow once per year as per local covenants.  It would be weird (not that I am opposed to weird) to mow only close to the house and leave the rest.


Basically I just need to go out and get it done.  I am going to have to do it, this year I am just doing it earlier than usual.

Thanks everyone for the pep talk!


Some places need to be wild 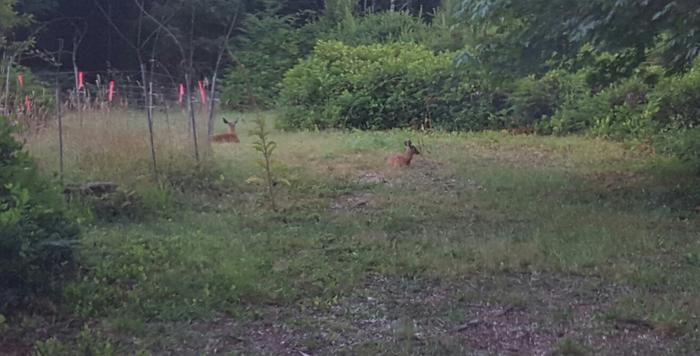 posted 1 year ago
Long-time allergy sufferer here, primarily dusts and moulds, but with an adult-onset specialty in tree pollens, specifically birch, and members of the rose family. I get a mouth-feel itch from uncooked apple, pear, and most pit fruit, including peaches, apricots, plums, and cherries.

One technique for managing pollen load is to ensure that you have female trees and shrubs of dioecious species in the hedgerows and beds around your house. Not only will they obviously not produce pollen, but they are also charged (positive, I think, to the pollen's negative charge, if I remember correctly) to attract pollen, effectively turning them into giant static pollen traps, if not filters, per se.

I came upon the idea for this as-yet-unproven solution when reading up on why urban allergy sufferers had it so much worse in recent years. The answer had to do with a preference on the part of urban planners for male trees, as female trees produced far more seasonal debris. This of course results in an increasingly overwhelming pollen load.

I don't think we have the technology, but I think we could develop charged pollen filters like the fabric barriers we string between sensitive crops. Imagine fabric barriers strung along property lines or around houses and living spaces, light, almost transparent sheets capable of holding a positive charge, perhaps powered by fencepost-top solar panels, that attract airborne pollen while their slight daytime charge is being fed. So during the day, or possibly only during especially problematic times, the charged sheets draw the pollen from the air, to then drop most of it at dusk, where it can be used by soil critters for food.

But if mowing more is the only effective management solution, don't despair. The deer really aren't going anywhere. Toss some butternut or pumpkin into the woods for them and watch it volunteer next year if you have any doubts. I would pay attention to when your former deer habitat blooms, as the other factor is obviously its value to pollinators, but if you let everything flower, or even just most of the early stuff, you'll retain most of those benefits anyways.

Hope you can find some happy outcome here. I don't understand it, personally, beyond the aesthetic. My outer hedgerow design features barrier elements against deer so the bloody hoof rats don't eat every damn thing that grows. They're beautiful creatures, and I love meeting them on morning walks, or seeing them from the canoe, but close to my gardens, they're just begging to be turned into cold-smoked venison.

Good on you for thinking of the bloody hoof rats, though. If they can't live a life absent humans, at least some of their human interactions can be positive.