Thanks. I am selecting for tomato plants with promiscuous flower types, that are incapable of self-fertilization. The thought process behind this strategy, is that every seedling will be a new F1 hybrid in every generation, thus making it trivial to trial  hundreds of thousands of unique varieties for resistance to blights, septoria, bug, climate, soil, etc.

s. lowe
pollinator
Posts: 866
195
posted 3 years ago
Hey Joseph, I am super excited to try some of your seeds this year. Planning to start out with just squash as I launch my own landrace wintersquash project. Of course looking at your seed list I was over run with 'Oooooh look at that shiny! I want it' so I'll probably order more than planned. That said I just want to make sure I understand how to order seeds; I send a list of the seed I am interested in, along with an appropriate amount of silver as well as $4 in modern fiat and a return address? Is there any other steps I should take?
Joseph Lofthouse
steward

Posts: 5763
Location: Cache Valley, zone 4b, Irrigated, 9" rain in badlands.
2359
posted 3 years ago
I'd love to meet some of you in person. I'll have seeds at the following seed swaps:

Posts: 5763
Location: Cache Valley, zone 4b, Irrigated, 9" rain in badlands.
2359
posted 3 years ago
When tomatoes were originally domesticated, a few fruits were taken from the Andes to Mexico. Then a few fruits were taken from Mexico to Europe. Then only some of the population left Europe to return to the Americas. With each move, the plants left behind their accustomed pollinators, and they lost genetic diversity. To cope, tomatoes became a mostly inbreeding species. Generation after generation, they have been shedding genetic diversity and becoming ever more inbreeding. The heirloom preservation mantra didn't do them any favors, it's emphasis on "purity" accelerated the inbreeding and loss of diversity. A study that I read recently found more genetic diversity in one accession of wild tomatoes than in the combined accessions of all the domestic tomatoes in the study. It's estimated that domestic tomatoes contain less than 5% of the genetic diversity of the wild tomatoes. I think of genetic diversity as a plants intelligence. The more diversity there is, the more intelligent a variety is, and the more capable it is of solving it's own problems with soil, bugs, changing conditions, climate, farmers, mammals, etc.

The promiscuous tomatoes are not suitable for greenhouse-growing, unless pollinators are provided. I am actively selecting for promiscuity, and against inbreeding. I am specifically breeding for tomato plants that cannot self-pollinate, and therefore will always be cross-pollinated, and always require a pollinator to move pollen between plants that are not closely related. That will tend towards high genetic diversity, and highly intelligent plants.

posted 2 years ago
I live in a climate generally considered not viable for growing melons, but the village near me has been growing watermelons for the past two or three seasons with good commercial success, using black plastic mulch. So I planted Lofthouse-Oliverson Muskelons in 2019 and just ate the first one -- yum! I heat my house with an attached plastic solar greenhouse that we take off in April or May, so I seeded it in place in the greenhouse in April, babied the seedlings after they were exposed to the elements and cold nights in May, and mulched with natural materials. The two plants that resulted were not impressive looking, seemed to kind of stop growing in August at a small size, but they set fruit and ripened well before first frost, so I'm very happy with it. Both plants had very small fruit, kind of two servings.

I am saving seeds from these two plants for 2020 but should I order more seed for the future, to avoid inbreeding problems? Or do melons not have much of that?

s. lowe
pollinator
Posts: 866
195
posted 2 years ago
I pulled the last of my true seed potatoes out the ground last week. I'll try to post a pic of all the tubers soon. The few that survived the utter neglect did well and produced very attractive tubers up to about 4 in x 2 in. I'm planning to plant the tubers out next year with a tiny bit more care and grow enough of each to sample and see if any are real winners. The fact that they produced anything under the conditions I subjected them to (dry farmed in shallow silt with no weeding) is a testament to the strength of the breeding
s. lowe
pollinator
Posts: 866
195
posted 1 year ago
Finally following up with promised pictures. Not of the tubers though, never got around to that. These are the plants grown from some of those tubers!
https://i.postimg.cc/ZndFxC6t/IMG-20200711-172120-5.jpg 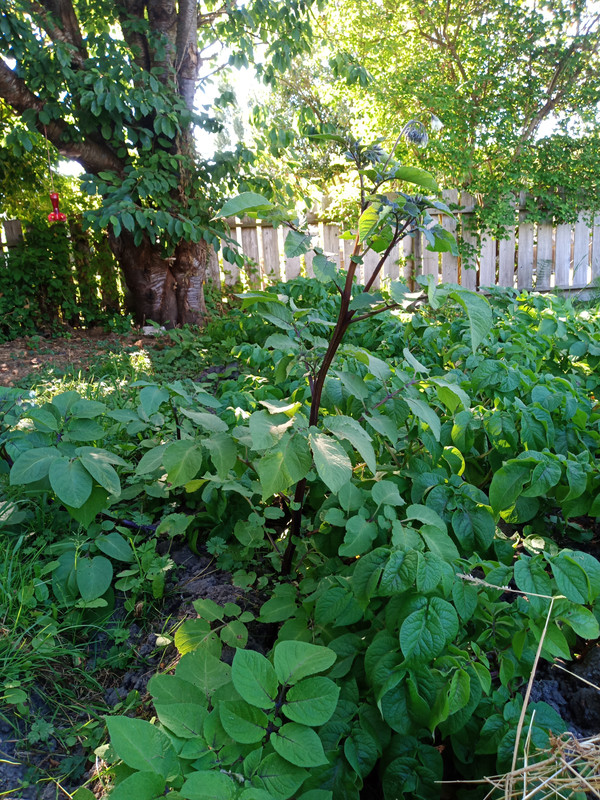 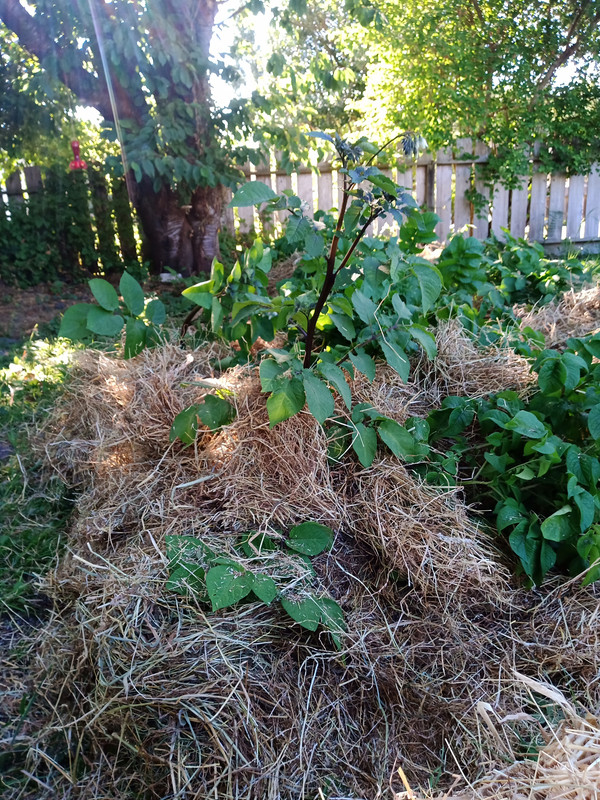 This is before and after my "mounding" attempt with hay. I did manage to get one mounding of soil on before this but these plants absolutely exploded up! I believe there are two plants from the same seed here, additionally I think there are several other plants that are from Josephs seeds but I'm a Dingus and didn't label anything.

s. lowe
pollinator
Posts: 866
195
posted 1 year ago
Another follow up on a long term project. Some of this is seed from my own 4 year effort to develop a flour corn that finishes in my damp coastal environment. Some of it is lofthouse unity corn. I mixed everything together before planting so I don't know what's what. Honestly, I suspect most of this is my seed because this is just about 1/3rd of the total and is made up mostly of smaller and earlier finishing plants. Lots of plants left are Mich larger than anything I've seen from my seed so I suspect its got Joseph's hand in there but I'll share this here anyhow 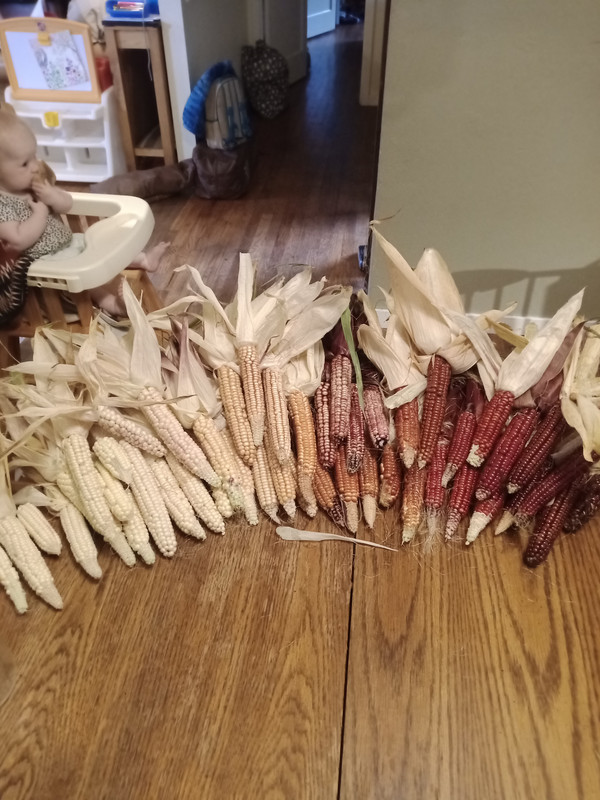 Burl Smith
Posts: 546
Location: Richwood, West Virginia
8
posted 1 year ago
Is this still available? I can send $5 for postage and handling + extra to get tasty tomatoes next year?

posted 11 months ago
Looking at the work that Joseph et al have undertaken and the results, I am amazed that they are not out there.  The work done by Premies, to my reading is far superior to the commercial hybridisers who are commanding a premium.  The answer I suspect is that Permies do it for people without regard for money where as the commercial guys do it for money without regard for people.  Thank you for your fabulous information.  It actually gives the average bloke the basics to have a go at getting a better product for themselves and their community.

Failure is a stepping stone to success. Failing is not quitting - Stopping trying is

Sami Winners
Posts: 5
posted 11 months ago
Can you use clary sage leaves?  Either medicinally or culinary?
Joseph Lofthouse
steward

Posts: 5763
Location: Cache Valley, zone 4b, Irrigated, 9" rain in badlands.
2359
posted 11 months ago
I am not personally selling seeds any more. I don't want to sell living beings, who I consider to be my children.