What is this?? - Albino maize

Maureen Atsali
pollinator
Posts: 453
Location: Western Kenya
62
posted 3 years ago
I was having a walk and admiring my newly sprouted corn, when I came across this.  I have to say in all my years I have grown corn I have never seen this.  My phone doesn't take the best close ups, but it is the exact shape and texture of a maize sprout... But completely white? Albino maize?  Anybody ever seen this or know anything about it?
IMG_20170331_184723.jpg 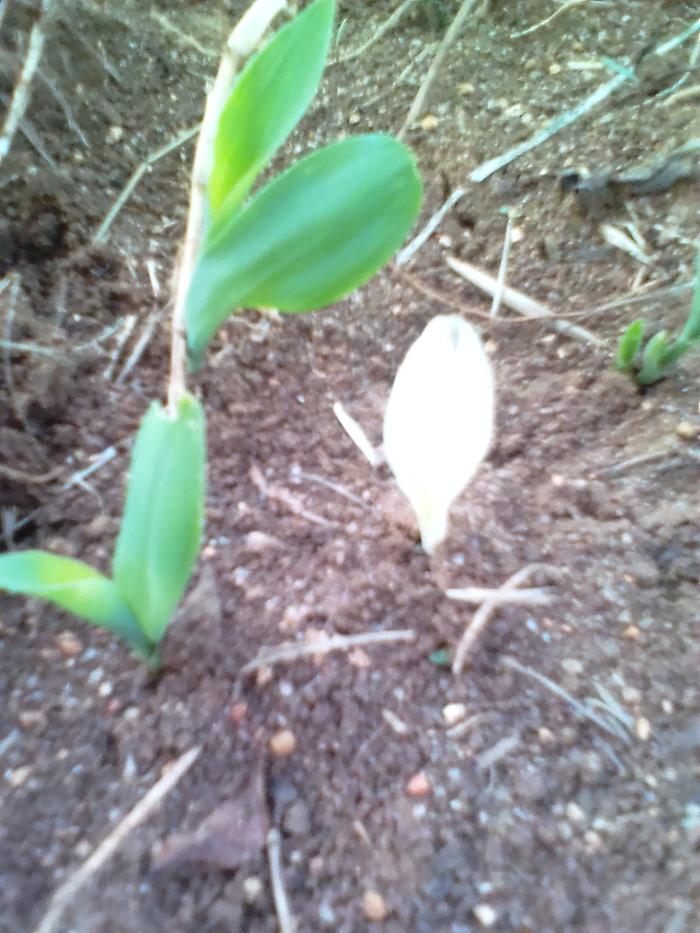 posted 3 years ago
I've occasionally seen an albino seedling, but I've never seen one survive to become a full plant. So far I've seen albinism in corn, peas, beets, bok choy, and beans. Partial albinism in basil. I suppose that if I keep growing diversified crops, I'll notice a few more before I die. It's kind of fun to spot them, isn't it Maureen?

Maureen Atsali
pollinator
Posts: 453
Location: Western Kenya
62
posted 3 years ago
This fascinates me!  I didn't know this could happen randomly in plants!  What causes it, does anyone know?  I suppose without chlorophyll, it will die... It's probably just surviving on the energy from the seed.  The only other plant I have seen without chlorophyll are Indian ghost pipes back home in Vermont.

Always something new to learn!

posted 3 years ago
I don't know exactly what causes it, but it's not inherited in these cases. If I recall my inheritable trait charts from college (way back when in the Dark Ages, I'm sure), the incidence is far too low to be indicative of a genetic component. Most likely it's just a glitch in the chromosomes when they are splitting during gamete production. Simply said, just a mistake when the seed DNA was being created.

When I was 20 years old and working in a commercial greenhouse, I saw occasional all white African Violets shoots. They all died. Sometimes a tip on the branch of some ornamental foliage plant would switch over to pure white, and while it lasted for awhile, it eventually died too. They always fascinated me.

Indian Pipes.....yeah! I haven't thought about them for decades. We had them in New Jersey too, in the pine barrens. They are so very cool!

Andrew Barney
Posts: 135
Location: Northern Colorado
36
posted 3 years ago
Yes. I've seen it more common in home saved Indian Corn. It is a recessive trait usually. If you happen to see several in a row then it means your strain of corn has been highly inbred and may also suffer from inbreeding depression.

I've only ever seen one albino corn seedling survive and that was one that was half albino and half green straight down the leaf. It apparently had just enough chlorophyll to survive to adulthood but it was a runt and grew slow. Don't think i got a cob from it or enough pollen to study the trait further. I was interested in that plant because it also had a unique purple stripe on it even unlike the other purple corn that i grow.

Considering your posts from the thread "Own or Breed Unique Varieties/Cultivars?" which i recently replied to as also growing purple indian corn i am not surprised you have found albino seedlings in your population. I imagine you will find more this year and/or next year. It is a recessive trait and will show up more and more if your corn is selfed and/or inbred, but 99% of the time they all die.
Maureen Atsali
pollinator
Posts: 453
Location: Western Kenya
62
posted 3 years ago
I actually added in 3 KGS of seed from outside sources this season, because raiding pigs absolutely decimated my last crop and I got very little of my own seed.  Very interesting to note that it may be caused by excessive inbreeding.  While it was cool to see, its not a trait I want showing up in my seed!

By the way, raiding pigs show a definate preference for my colored maize over the white hybrid which is growing on every side of me!

posted 3 years ago
I don't think it can photosynthesis without green colour, so it must still be feeding off its seed energy.  Carol Deppe talks about why this happens in one of her books, but I don't remember which one.