Idea for a pallet dismantling tool.

posted 1 year ago
Yesterday I cut up some pallets and built a new hen house.
It didn't take too long,  but faster would be better.

To use, slip the device inside of a pallet,slide a floor jack between the 2x6 boards and operate the jack.
Ideally the 2x3 lumber will apply force in such a way as to easily pop the fasteners cleanly  out of/through the wood.

A potential problem I see are one of each pair of 2x3's being too far from the deck boards/stringer joint,  so it just smashes through the deckboard.

Another potential problem I see is the 2x3's being too weak to handle the force.

I  can imagine other set ups, where a treadle or such translates body weight into expansive force, maybe power hammer style,  but this idea seems more reasonable right now.

Any feedback would be welcome.

posted 1 year ago
I've struggled to disassemble pallets without damaging the pallet boards.  My pallet supply company has odd ball sized pallets with oak runners and glued spiral nails.  So they're very hard to pull.  And the board spacing is irregular.

The best tool I've found is the missus and a large crowbar.  She kind of gets all zen on them and slowly cranks through piles of pallets.  She can tell when the boards are about to crack and tries a different angle.

If I had to come up with a custom tool, I'd be tempted to make a wedge system that slides into the center of the pallet (like a forklift's forks).  It would consist of three pieces of wood/metal, two that stay in place and press against the pallet slats and one wedge that presses in between them to separate the slats.

posted 1 year ago
If you can get the slats loose from the wood runner a bit, a sawzall with a metal cutting blade will zip through the nails, leaving you with nice boards with cool nail heads.  If you can get the slats loose a bit.  If you get them any looser than the width of the sawzall blade (very easy to do), when it cuts the nail you end up with a bit of nail shank protruding from either the slat or the runner.  So depending on your final use for either piece of wood, that could be a problem.

posted 1 year ago
I use a sawzall too.  I've found it to be faster than anything else and I just hammer any bits of nail that stick out.

posted 1 year ago
I've been dismantling some pallets recently too. I also dream about nifty ways to do it without resorting to two different pry bars, a deadblow mallet, a claw hammer, and a pair of nail-pulling pliers... skinned knuckles and bruised fingertips..
I don't have one (yet) but there is a pallet stripping prybar that is like a fork shape that works well for this job. Check out Karl Treen's video about it .

There are  pallet dismantling machines, designed to save the wood for building "new" pallets. They are wide bandsaws that cut the nails right between the deck boards and the stringers. Each of the boards gets a little shave in the process, but not enough to matter (at least for pallets), and the boards are left with remnants of the nails.

Are the pallets you are using hardwood or softwood? I've found that the softwood pallets often come apart more easily, and with less cracking than hardwood ones.

I've also thought that the ends of the deck boards, with the nail holes, and often split, aren't much use anyways, and so would need that trimmed off for use in a project anyways.
So a saw cut to free the two outside stringers leaves just the center nails to pry free.


Nails are sold by the pound, that makes sense.

My pneumatic denailer was developed for the pallet industry. I use it primarily to remove flooring nails. You put it over the pointy end of the nail and squeeze the trigger. Goggles should be worn. This tool has given me a tremendous advantage in processing recycled flooring.
Screenshot_2019-05-06-22-46-08.png 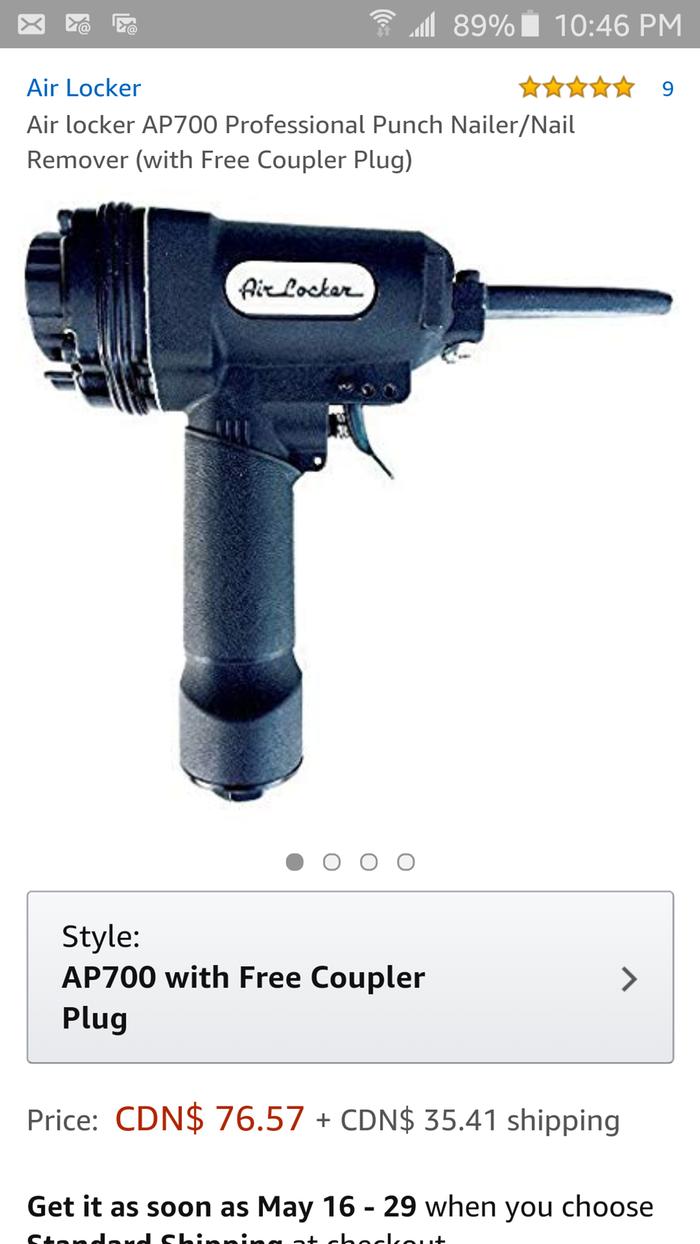 posted 1 year ago
I've been using  sawzalls, battery and otherwise.
I am seriously considering a cordless circular saw, just for processing pallet lumber wherever I find it.
Switching to a sawzall pruning blade has made it faster, but damn it, I want it fast still.
Plus, a circular saw blade lasts along time.
I don't mind the shorter boards, that come from cutting, I just plan around that.
I leave the nubs of the deck board nailed to the stringers, unless they get in the way.
I plan projects around mostly leaving the pallets intact , but that isn't always possible.

Once the bottom deck boards are removed, it's pretty easy to stand on the top deckboards , in between the stringers, and kick/pry the stringers loose,
Maybe I will focus on that.
I have built prybar style pallet buster, but the 1" ridged electrical conduit bent on my first use!
It might be time to revisit that design.

Dale Hodgins
Posts: 9002
Location: Victoria British Columbia-Canada
675
posted 1 year ago
If I were trying to dismantle many pallets of roughly the same size, I would put three stakes in the ground and then cut the tops so that they become big long wedges. Stand a pallet on top and smack it down, hitting the rails with a small sledgehammer. This may just remove the boards from one side, but it would be very quick to do. And you're working with gravity. It would end up looking like Vlad the Impaler has taken over a portion of your yard.

A twist on the wedge idea, would be to have the same three wedges and put the edge of the pallet against a foundation wall. Now use the sledgehammer to drive the wedges until their tips hit the wall. You can start them out just about an inch narrower than the gap in the pallet and have them end two inches  wider.

Suppose you've got dozens of pallet boards that have been separated and they are all filled with nails. Hold the board over an anvil or a section of I-beam and smack the board with a rubber mallet, just behind the nails. All of the nails should be driven up enough that you are able to grab them with a claw hammer. If it's just rough boards for building you could use a small sledgehammer instead of a rubber mallet, since denting wouldn't matter.
Kenneth Elwell
pollinator
Posts: 620
Location: Boston, Massachusetts
200
3
I like...

posted 1 year ago
I’m glad Dale mentioned the AirLocker pneumatic nail removal tool... that is also on my list to get...

I break down the pallets and crates, then bring the boards into the shop for denailing. Good rainy day/nighttime project, plus I avoid nails in the driveway!! (Free lumber isn’t free when tires are expensive)

The cordless circular saw is great! Faster than the sawzall for sure. Breaking the pallets down at the source also allows for more to fit in the truck.

As for pallets, I’ve been finding the specialty ones that are odd-sized to be a decent source for 2x4, 1x4, 1x6, and other lumber. The standard pallets find their way back into circulation (and there’s a whole industry about that) but these specialty ones are really only of use to the original manufacturer. (And too costly to aggregate and back-ship)

Solar panels, sheet metal, snowmobiles, plate glass, are some hints for companies that may have these...

Dale Hodgins
Posts: 9002
Location: Victoria British Columbia-Canada
675
posted 1 year ago
If you find a place that installs big HVAC units or other big cumbersome things that are shipped, you are likely to find a source of larger lumber and even plywood. I once salvaged a bunch of really good 2x6 that was used to pack a very expensive steam generator. When the product inside is worth hundreds of thousands or millions, they don't scrimp on packaging materials.