posted 4 years ago
Since we have a thread for Making Paper at Home, I thought we should also have a thread for discussing how to make ink for writing with. Being a college student, I write a lot of notes by hand, because I remember what I have written better than anything I have ever typed. Also, learning to make my own ink that I could use with a fountain pen or quill pen would be a good way for me to stop using disposable plastic pens and avoid the carbon footprint and waste streams involved with that.

I think a good way to start off this discussion would be with the history of ink:

Starting off with the most basic type of ink, we have LampBlack Ink, which has only three ingredients:

Making a slightly more basic version, in this video, below, Elliott, makes a lampblack ink from lampblack and vodka. As noted from the above article, vodka should probably not be used but, instead just water, because of possible archival issues due to not using just those basic ingredients. Gum arabic is mentioned in this video but not used. The most likely issue to occur from not using gum arabic is that the ink may run.


In traditional China and Japan, ink can be made with an inkstick, inkstone, and water:

If, you want to make medieval style ink, Ian The Green's article describes a four-ingredient recipe. This is the basic recipe:


Ian the Green wrote:-Tannic Acid (comes from galls from trees, like oak galls)
-Iron (from leftover nails)
-Some type of Liquid Base (water, alcohol, vinegar)
-Some type of Binder (Gum of Arabic, Glair, Fish Glue, or honey)

Tannic acid comes from pants that are defending themselves from predators. It can be found in the galls of trees, tree bark, leaves, and roots.
Glair is made by whisking egg whites a lot!!!.
Fish glue can be made by boiling fish scales for several hours.
Honey was not recommended as a binder, because it apparently doesn't dry very well.

Now, being a student at college, this for me might take entirely more time than I can commit to.
So, I found a simpler recipe in a kids experiment booklet in my room by the ACS. Their recipe was as follows:

From the articles I have read, it seems like this simpler recipe will make ink that I can use, but I might run into issues with the ink from the above recipe bleeding on the paper.

Around the issues of manufacturing and making things as nontoxic as possible, there is a way to make ink from just walnuts:

Ink could also be made with berries, vinegar, water, and salt, but I am concerned about this getting eaten or attracting insects or rotting:

At the moment, I am thinking the ACS version of ink might be my best option for simplicity, time, and slight compromise (b/c, I would still be buying the iron tablets) for my situation.

Anyone have thoughts on making their own ink for writing? Suggestions?

posted 4 years ago
I once made blue ink from charred potatoes. It was a long time ago, but I think the basic procedure was to charcoalize potatoes, grind them into a powder, and soak them in alcohol.

posted 4 years ago
as a kid me and my friends would use the mashed up juice from prickly pear cactus apples, also makes great pinkish dye for anything.


I did this decades ago and remember it faded fairly quickly; that may be a concern with many plant extracts.  It was pretty, however!
Dave Burton
steward

posted 4 years ago
Has anyone made ink with Huckleberries?

I did this decades ago and remember it faded fairly quickly; that may be a concern with many plant extracts.  It was pretty, however!

I would try drying and grinding the fruit and adding a mordant like alum or vinegar. Boiling the fabric with the dyestuffs can give lasting color if you keep the dyed fabric out of direct sunlight and handwash with cold water.

Matt Rountree
Posts: 22
posted 4 years ago
I tried blackberries before. I added gum arabic to improve the viscosity. The resulted ink is purplish in color.
Dave Burton
steward

Matt Rountree wrote:I tried blackberries before. I added gum arabic to improve the viscosity. The resulted ink is purplish in color.

Ooh! Thank you! I'll have to try this after my current ink runs out!

posted 4 years ago
Thank you for this wonderful post... we'll be making ink today from blackberries!

"I could feel the olive tree rooting itself into my heart, showing me how to re-green my own journey and embark on a new path." ~ http://www.alicegriffin.co.uk

posted 4 years ago
Eeeeh! Please post pictures of your ink, Alice! I really want to see how it goes!

posted 4 years ago
I think Walnut would be a good one to try :-)  This is my hands the day after shucking 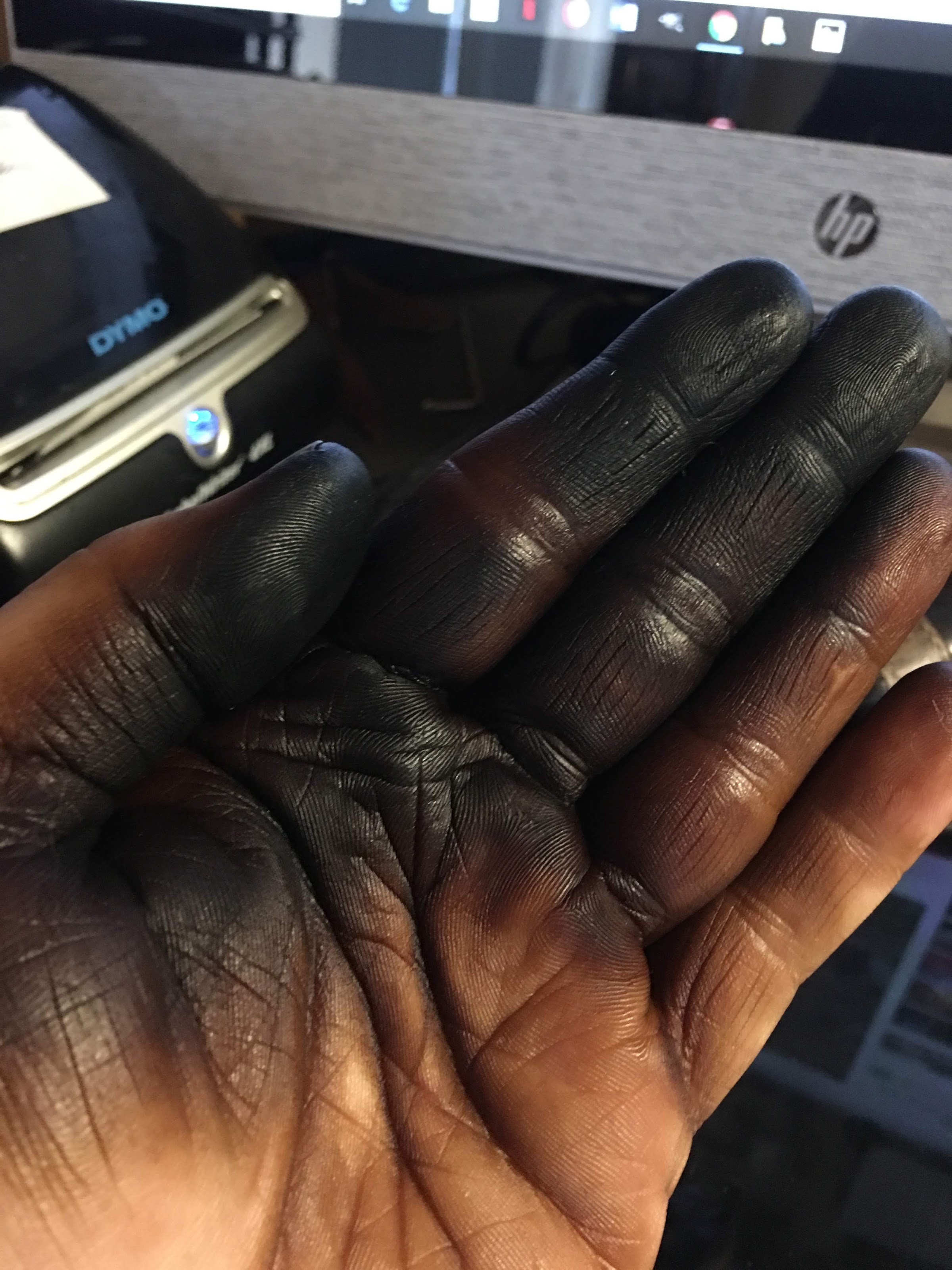 posted 4 years ago
Hot damn, Scott!!! That is so inspiring the potential walnuts could have for making ink!

Dave Burton wrote:Hot damn, Scott!!! That is so inspiring the potential walnuts could have for making ink!

What's even crazier is these walnut were green.  It's the chemical in the fruit husk that is causing the color.   It was seriously crazy.  I had a meeting with someone yesterday, pretty tough to look professional when you have two black hands.

But eeeh! That also improves the number of functions that can be gotten out of walnuts! You get the nuts, which you can eat, you get the ink that could be used for writing, and maybe maybe the husks could be composted or mulched after the ink has been taken out of them! Please keep me updated on what you do with the walnut husks!

posted 4 years ago
Black walnuts boiled a while in water make a very dark inky substance. We use it to darken (hide) coyote traps. Would probably darken almost anything.

posted 4 years ago
We made three colors of ink for art last week using elderberries.  Elderberries are pH indicators (meaning elderberry juice turns pinkish with more acid and bluish with more base additions), so we took some elderberry juice and added lemon juice to some and baking soda to another.  Then the kids used eye droppers and straws to do blow art paintings with the three colors.  We always have elderberries in our house. I have a book on foraging and using elderberries (affiliate link) and we use them often for drinks, desserts, health remedies and such.  We have a lot of fun with them and their color changing properties with things like elderberry lemonade, so I figured it would be fun for crafts.  It makes a great dye for play dough, too.

Obviously, this was just for short term arts and crafts and wasn't designed to hold up for years.  It could be fun to experiment with making permanent dyes with it though.  :) 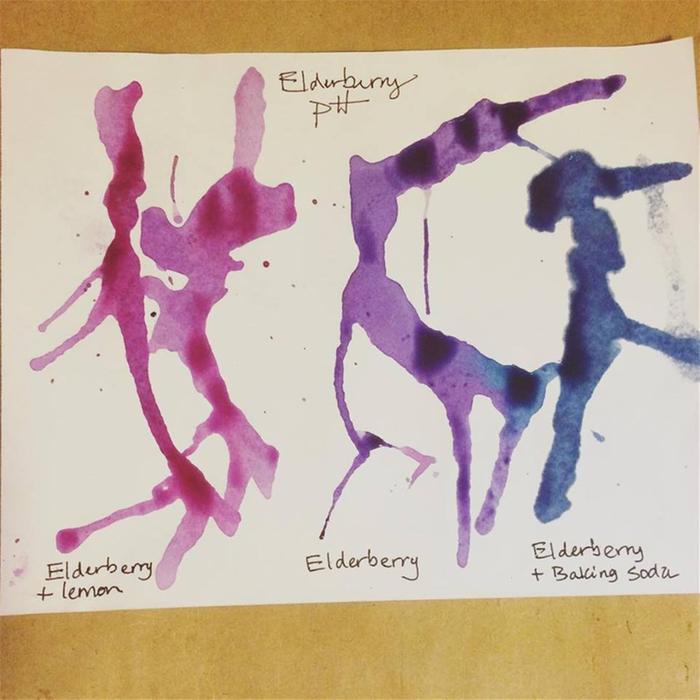 posted 4 years ago
Judith wrote up great information and a nice review about The Organic Artist by Nick Neddo.

I haven't read it myself, but I hear it does include information on making inks.

Jocelyn Campbell wrote:Judith wrote up great information and a nice review about The Organic Artist by Nick Neddo.

I haven't read it myself, but I hear it does include information on making inks.

My library has this book so I borrowed it.  Now I want my own copy.

The book has a lot of ink recipes, but this looks the easiest.

here's the recipe for coffee ink in the book.

I'm experimenting with this today but having trouble getting the coffee dark enough to make me happy.   Even after boiling the coffee and reducing one cup to two teaspoons worth of liquid, the colour was still too light.  I added some iron mordant (rusty nails soaked in vinegar water) and still too light.

posted 3 years ago
here's another video about how to make historical ink.  This would be for dip pens.

posted 3 years ago
A new hobby of mine is to forage plants, make ink and paint something abstract with it. Here is a painting from malabar spinach berries in vinegar (preserved in a jar with whole cloves), and tumeric alcohol ink :)
P1260814.JPG 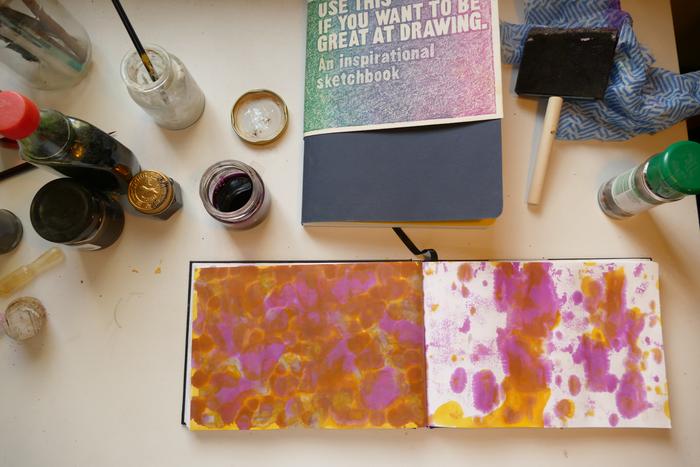