Can I create a perpetual sloping waterfall, using a bell siphon? *Advice*

Dorian Nouka
Posts: 4
posted 3 weeks ago
Ok, so I'm trying to build this piece for my house. It's essentially a waterfall that falls down into a water bowl and eventually, with the help of a bell siphon flows back up a hose onto the top of the waterfall and continues over and over.

I have a bunch of moss I collected on an amazing hike I went on recently that I want to propagate and work into the waterfall system, so that the water flows over/around the moss while doing its loops. Throw in some lava rocks, and shells (I live in Kauai) into the sloping area of the waterfall and bam, beautiful living waterfall.

But the thing is, I just don't understand the engineering/physics end of the bell siphon. I've looked up about 4 or 5 youtube videos, and I still just don't get it. I'm basically wondering if to you (someone who has messed with bell siphons) this seems possible to pull off.

If dimensions matter I'm thinking the waterfall peak (top of the hill for lack of a better word) will be 2 feet higher than the water bowl. I can probably adjust accordingly, if I have the dimensions wrong; I'm just looking for a proof of concept here, and maybe any advice you might impart.


Edit: I guess I didn't put it in the picture, but inside the water bowl is where the bell siphon would live, and the hose would bring the water up to the top again.
perpetual-waterfall.png 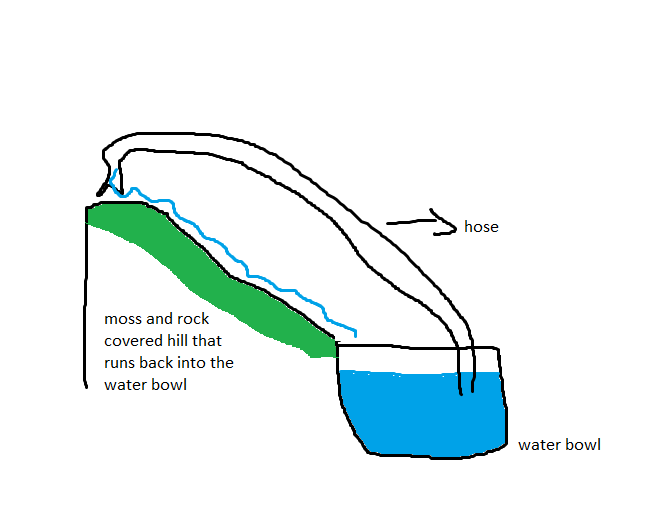 Nick Williams
Posts: 50
Location: Billings, MT
11
posted 3 weeks ago
Nope, outlet of the siphon has to be below the water level.
Mk Neal
pollinator
Posts: 511
Location: Chicago
150
I like...

posted 3 weeks ago
Here is another thread discussing siphons:
https://permies.com/t/156085/permaculture-projects/Aquaponics-passive-circulation-ideas

You are going to need some kind of energy input in the system order to deposit water uphill from its source.

posted 3 weeks ago
Note that a siphon can run uphill over an obstacle, (probably limited height) but has to end below the start point. No free lunch, I'm afraid. You wanna move the water to an uphill destination, you have to add energy. Lots of ways to do it besides a standard electric pump, but they all amount to a pump of some kind.

posted 3 weeks ago
If the "water bowl" is flowing water you could add a water wheel for a little hydro power. Is the bowl a pond or are you making something smaller like a fountain?

Douglas Alpenstock
pollinator
Posts: 1322
Location: Canadian Prairies - Zone 3b
346
posted 3 weeks ago
Agree with the comments above: no free lunch. Curse you laws of physics!

However: if you do add a little bit of energy and create a tiny waterfall, it will do much more than grow your moss. You will get to meet every bird, insect, and furry creature that lives on your property. The sound of a waterfall brings them in.

Dorian Nouka
Posts: 4
posted 2 weeks ago
Physiccccssssss!!! Curses. Ok, I appreciate the wake-up call on this one. I'm still trying to not use any energy on this one. Part of that is I'm living off grid, and while a cheapy solar setup is within budget for environmental reasons I'm trying not to use such a thing for this.

I'm moving into summer here in Kauai so I'm not sure how much more it's going to heavily rain, but perhaps a rain catchment system might be my best bet, and have the waterfall only go in motion when it rains.

If anyone has any other ideas I'd love to hear em. Looking through the above linked thread now.
T Melville
pollinator
Posts: 423
Location: SW Missouri • zone 6 • ~1400' elevation
119
I like...

Dorian Nouka wrote:Physiccccssssss!!! Curses. Ok, I appreciate the wake-up call on this one. I'm still trying to not use any energy on this one. Part of that is I'm living off grid, and while a cheapy solar setup is within budget for environmental reasons I'm trying not to use such a thing for this.

I'm moving into summer here in Kauai so I'm not sure how much more it's going to heavily rain, but perhaps a rain catchment system might be my best bet, and have the waterfall only go in motion when it rains.

If anyone has any other ideas I'd love to hear em. Looking through the above linked thread now.

Do you have naturally flowing water on property? How about a ram pump?

How about solar → heat? (Not photo-voltaic, you already said you'd like to avoid that.) I'll add a link to a video where a guy basically moves water with Boyle's gas laws. I don't know that it would scale to anything I'd call a waterfall, but most of the parts are free, maybe you could build multiple pumps? Be mindful of the water temp with this one, he didn't mention if it heated up much.

The embedded video plays for me, but sometimes this guy's videos won't play "remote linked". In case there's such a problem, here's a direct link.

posted 2 weeks ago
I feel what gives it away in most cases like this is the use of the word "perpetual." As mentioned above, nothing's free.

If you had enough wicks encased in some form of wrapping or tubing, and they weren't prohibitively long, you might be able to wick some water uphill. If it's an option, you might decrease the height difference by lengthening the waterfall and decreasing the slope, in which case it would be less waterfall and more a rill on a slight incline.

You're not going to be able to take energy out of the system with a water wheel or turbine to then be able to use that energy to move it back up. That's, again, trying to get something for nothing.

One of the backbones of the system I want to build involves a two-pond system with a channel running between them. The bottom pond will have a pump, likely wind-powered (with a solar or battery-electric backup should the cycle timing be critical), to move water back to the top of the system, probably using a series of fitted terra cotta pipes as they'd use in the past for drainage tiling forming a buried, sloping straight run up to the top pond, but as little a rise as possible. An air pump would aerate water sitting in the pipe from the bottom, whose mouth would extend three-quarters of the way to the bottom of the pond. The bubble generator pump could almost foam the water, which would ascend the pipe, lighter than the surrounding water as it would then be, and it would both rush out the top pipe and pull more in from the bottom.

I know this works on an aquarium level. I don't know if a tight enough seal could be created using the terra cotta pipes. I also don't know the limitations of this technique, but I would imagine lots of water or air pressure leaving through the sides or the joints of the pipes would make it less efficient. I would probably caulk it with clay on the joints, and if I had excess clay in the area, I might backfill with it, as long as it's not hydrophilic and likely to swell, crushing my infrastructure.

Another idea I was playing with had to do with mimicking the functioning of human veins. I would love to have really simple one-way pressure valves in every section of pipe, should they be water- and air-tight enough to handle the action. A fitted wooden baffle within each section of pipe, probably oriented such that it closed flush against the next nested tube, but hinged such that pressure coming up from the downhill end opened the baffle, but corresponding pressure backwards would close the baffles immediately. So you could pump briefly and move water up the "locks" of the system incrementally, perfect for intermittent sources of power. You'd still have to overcome the pressure of a system full of water going up two feet, but after you'd overcome that, you'd only need to add a little more to open the baffles and pump water up, and should you suddenly stop applying that pressure, all the water doesn't come rushing back down the pipe at you because each of the baffles catch and hold a segment's worth of water.

This should also allow for the movement of living things up through the pipe to the upper pond without damage, as long as there are no in-line impellers, the which my design obviates. Realistically, I would probably put mesh over any intake larger than minnow-sized. I'm okay with babies being washed up my pond system's main vein, as they and anything smaller would likely be unhurt by it, whereas a catfish a pound or two large might even get stuck, and then I'd have a tiresome weekend of excavation and rebuilding.

Posts: 3458
Location: Upstate NY, zone 5
209
2
posted 2 weeks ago
I think scale is the issue here: the bubbles in an aquarium-sized system can carry water with them, but in a 4" or so pipe, the bubbles would have room to separate out and rise to the top of the pipe, leaving the rest of the water unpropelled. I think the aquarium systems run vertically giving no opportunity for bubbles to separate, and also I don't think those systems raise water much above water level.

I would try a vertical pipe with outlet pouring into a channel running to the upper pond. I would try it with progressively larger pipes starting with aquarium-sized ones. If there is an upper limit to pipe diameter that functions, you could use multiple pipes in parallel.