National Preparedness Month: What are you doing/have done to prepare?

posted 4 weeks ago
Need a backup way to obtain water from 180 ft deep well when power goes out.  What are others doing other than generators?  I don't want to store gasoline nor have a machine that needs servicing and is expensive to buy and noisy.
Nicole Alderman
master steward

Denise Cares wrote:Need a backup way to obtain water from 180 ft deep well when power goes out.  What are others doing other than generators?  I don't want to store gasoline nor have a machine that needs servicing and is expensive to buy and noisy.

I wish I had an answer for this--mines only about 25 feet down, and I'm still not sure what to do for it. Here's some related threads:

Do wells survive earthquakes? If they don't, how do I ensure water for my family?

Anyone have experience with EZ water well hand pumps?

how to install a hand pump alongside an electric well pump???

posted 4 weeks ago
One of the things that we have to prepare for is the effects of the weather, on our bodies. We both have disabilities that limit what we can do outside in extreme weather. So, we are continuously working toward being able to stay indoors for as much as a week or even two at a time. But, we have critters who need food, water, supplements, and in some cases grooming &/or potentially assistance in birthing.

The birds are the easiest to accommodate, for this stuff, with the exception of the freezing water nipples, because when setting up their watering system, I didn't know there was a horizontal option that doesn't freeze as quickly. They currently have 10 gallons (a 2week supply) with barley bundles and acv, to keep the water fresh, clean and parasite free, as well as the benefits the acv offers their bodies. I'm starting a build this week, to shelter their water supply. The plan is a surround that can be removed, in warmer weather. We're also trying to decide whether it would be worth it to run a small heater - but, there's no power run to the coop, which is more than 100ft from the closest power supply, which isn't exactly the safest power supply. I've taken a big, (33gal?) outdoor, lidded trash can, put 4 holes near the bottom, and inserted (&sealed in place) pvc corner pipes, angled down. This was set on pavers, to raise it up to a comfortable height for the chickens. This contraption holds 150# of laying mash (only non-gmo, organic, tyvm), which will last my girls months, even if there's nothing to forage, in the worst weather. Next to that is the 5gal bucket, with 3 of the same holes/corner pipe setup, filled with a 50# bag of oyster shells (nearly a year's supply), for them. The ducks have adapted remarkably well to this system, with the only added requirement being a water supply they can get wet with, which will be one of the few required things to deal with, every day, along with collecting eggs and checking on the flocks' wellbeing. I'll be covering the North side of the run with a heavy duty tarp, to block the wicked north-east wind that rolls down the hill at them, and bolstering the bottom of that with straw bales. The south side will also get the straw bales, but I don't want to block the sun, so no tarp there. The east side of the run is protected by the hen house, and the west side faces our house, so that won't be blocked, for both sunlight and safety/ visibility.

The goats are a bit more difficult, in some ways - easier, in others. For one thing, last year, we only had 3 - this year, we have 8! We've laid in a little over 40 bales of hay, so far, and it's in the goat barn, so it's easy for me to access, but I've fenced it in, so they can't destroy it (like they did last year), and turn it into dirty bedding for me to clean up. Water was difficult last year, until I sacrificed our 5gallon picnic cooler as a small trough, for them. The insulation was a huge help, even inside the barn - but it was still too small. While looking for a big cooler, to bring home the half cow he bought, he found 30gallon ones on sale for $58. I sent him back for 2 more, to use as troughs. We can't get a plain, uninsulated, plastic trough, for that price, and they have a drain plug, for easy cleaning. So, one is now installed in the barn for the does to access, and another down in the bucks' paddock, both with barley bundles and acv, just like the poultry water supply. John is going to build a pair of big mangers, that will each hold a full square bale of hay, so they'll be good for a week at a time. That only leaves daily oats & wellness checks, for them. So, if we divide our critter chores between us(which we've already been doing), dailies shouldn't take more than 10 - 15 minutes. Weekly water changes & hay additions should only add another 10 - 15 minutes. Grooming the fiber goats every week and hoof trimming for all are where the extra time comes in, but our very rocky ground actually helps with the hooves('bout time it helped with something!), so we can usually get by for several months, only checking them. Grooming, I'll simply not do, if it's too bad out for my body to function.

Other preps: we bought a small tractor with an attached bucket, as well as a handful of other accessories, so our driveway won't be inaccessible for half the winter, this year. W00t! That's a HUGE boon, for us! We've begun hitting the stores for the items we weren't able to grow (most things, ugh), to restock the pantry, including almond,  coconut, and oat flours. I did manage to forage for some wild culinary and medicinal herbs, and plan to get back out there, to bring in some more, in the next week or so. A new dehydrator is helping me put back produce that takes up less space, and creates less weight burden on the pantry shelves, too. I'm paying particular attention to spices, as well as foods that have medicinal value, like garlic, onions, ginger, turmeric, pumpkin, kale, blueberries, cranberries, apples, etc., and am looking for a good source of very local raw honey. John has stocked the freezer with half a cow, a boar he hunted in May, 4 of our ducks, and purchased equipment (killing cones, a plucker, a portable table, & a second gambrel, for larger carcasses) to do the next ones, himself. Just this morning, he ordered a pig for slaughter, too. We hope to get at least one or two deer and a turkey or two, this season, though actually getting a turkey would represent something of a miracle, since we're pretty sure they keep track of the turkey season calender. A fair portion of all this meat, especially if we overflow the freezers, will be devoted to jerky, hard salamis, and other cured &/or canned meats, that don't depend on electricity for storage. Our goal is to not depend on the grocery stores, at all, this winter.

I'm making soaps, shampoo, laundry soap, & herbal remedies, and will soon shift to simply preserving the rest of my supplies. The finished products take up less space and offer far more convenience, than the unused supplies, but the unused supplies offer more options for other uses, so I try to find a balance between them. For example, if I use up all my plantain & calendula making a healing oil, then someone with an allergy to calendula needs a salve for rashes, I've no plantain left, to make one for them, or if I want a calendula hydrosol, for a hair rinse or wound spray, I've no calendula left, for that.

Next year, we will focus on less total dependence on the power grid, but this year, as far as power goes, our main concern is the well pump. The well itself is in a sunny spot, and doesn't seem to use much power, so that will be the first thing we try to move to solar - hopefully for this winter. I'm still searching for an affordable hand pump that can draw from our 650ft deep well.

Jesse Glessner
Posts: 65
Location: Indiana
8
posted 3 weeks ago
Emergency Preparedness around here is a non-event! I compiled a nice EP PowerPoint presentation over a whole variety of topics and had four 8 ft. tables spread with samples of what people could do with very little money. The crowd at our local Senior Center was more interested in what they were going to have for lunch than in the articles or the presentation.

However, I'm posting a photo of a lighting system that some of you may want to actually make for power outages as well as having that in your stash of items for emergencies. It is a simple 12V, two wire system. You can make the wires however long you need them. The bulbs are LEDs with a socket that you can turn the bulb either way in - and make your attachments on the wires wherever needed, maybe even only one bulb per room, just to get around without tripping over something. IF you turn the bulbs to the ceiling you get about twice the output as they reflect off the ceiling nicely. Use a coat rack, a tall camera tripod or a home made stand to tape the bulbs in an upright position. I just show a small 12V battery, but what that battery cost, plus a few extra bucks will buy a 12V car battery at WalMart. You can buy the wire, LED bulbs (2 prong type), and the sockets on Amazon for some surprisingly decent prices. See the photo below!

Oh, also, I have a JayGee modified version of a PVC & 5 Gal bucket toilet with a seat if anyone would like to get the photo of that also. 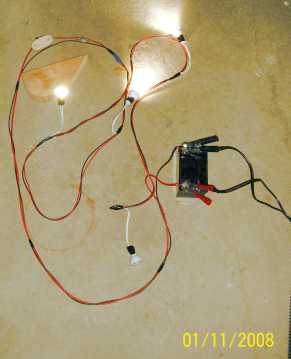 Dana Jones
Posts: 139
5
posted 3 weeks ago
Lots of good ideas here. We live on 8 acres, have chickens, sheep, horses, dogs, the yearly feeder pig and ATM, a steer. The 2 freezers are packed and the canning closet is full. I was raised in hurricane country and lived there most of my life until 6 years ago. Now we live in tornado country. We could live very well on what I have stocked up for probably a year. I have small livestock on purpose, easier to raise and maintain. We are in a good neighborhood of fairly like minded individuals, except for a couple of jerks nobody likes. LOL We raise a garden every year, dehydrate, can and freeze the proceeds, as well as spread the wealth around the neighborhood. I have a large supply of seeds. A neighbor is having a well drilled this weekend and is going to run pipe to our place for the animals and garden. He has benefitted from our garden and meat supply and wants to keep that going! LOL