Tobias Ber
Posts: 525
Location: Northern Germany (Zone 8a)
25
posted 4 years ago
Hey... I d like to try to grow sweet potatoes in zone 8.
they re supposed to grow in this climate but are probably not perennial.
i d like to try to grow it for the greens, some tubers would be a nice add-on.
i ve got a store bought sweet potatoe. it has not chitted yet.


is it too late by this time of the year? last frost date is 9. april, but we normally don t plant cold sensitive plants outside before 15 may.
how do i proceed?

David Livingston
pollinator
Posts: 4328
Location: Anjou ,France
243
posted 4 years ago
People have been growing them out side in the UK for ten years plus and they are just starting to take off in France I will be planting my plants out next week or the next time the temps hit 20c.
Can you get plants as its a bit lake , depending on the veriety to start growing them from a sweet potato.

posted 4 years ago
Growing them for greens is easier than for the roots. As long as it's safely past frosts you can start putting slips in the ground outside. They might not immediately take off, give them a chance to get roots in the ground. Once they do take of off (usually when really hot weather arrives) they're very vigorous. They'll keep growing until freezing weather kills them. Don't expect them to survive any kind of frost, though.

Sweet potatoes don't chit, they produce slips. These are short sections of vine that sprout out of the sweet potato itself. You pop the sections off and if they have roots formed can immediately plant them. I like to put the slips in a vase of water while they form longer roots before I plant them outside. Slips can be pulled from the original potato when they are anything over six inches.
Marco Banks
gardener

posted 4 years ago
They'll do very well in zone 8. You can start them by sticking your potato with toothpicks and suspending it in a jar of water, and then as it sprouts, let those slips grow to 8 inches or so before snapping them off at the potato and then rooting them in a glass of water.

Much easier is to plant the whole potato in the ground and then let it do it's thing. Once it starts to send out vines all over the place, snip off 10 inch pieces and root them in water.

Mulch them heavily once they get going. Lift up the vines and put 8 inches of wood chips under them. They will continue to root as they branch out. Within a couple of years, you'll find sweet potatoes coming up everywhere.

My sweet potato patch started as one tired-looking, shriveled sweet potato that was sitting on the kitchen counter, sprouting green vines. I didn't so much as plant it, as I just threw it out there in the garden and kicked a bit of dirt over it 2 days before we went on an extended summer vacation. When we returned, it had taken over a huge corner of the garden and overtaken the okra that grew near it. That fall, I was stunned to dig up over 30 lbs. of potatoes from that one sweet potato. In the years since, it's almost been invasive, sending shoots out underground, as well as rooting as the vines crawl over the top of anything and everything. I use it as a ground cover on a steep hillside that is planted with fruit trees.

posted 4 years ago
I have had some tubers come through winter in the ground and regrow somewhat the next year, but they don't seem to do very well. So far Sweet Potatoes have not done fabulously well for me, I suspect my soil is too heavy (I think they prefer sandy soil?) but I'm trying with a few kinds this year, and will leave some tubers in the ground and see if they make it. May is definitely not too late to plant them, in my opinion. They barely grow if it isn't hot.

John Elliott
pollinator
Posts: 2392
88
posted 4 years ago
Germany has a zone 8? You learn something new every day; must be close to the sea, where the influence of all that water keeps it from getting real cold.

Sweet potatoes do great in the zone 8 of North Carolina, but I do believe that North Carolina is a tad warmer than Germany in the summer. And that is what sweet potatoes love -- hot and humid. My slips are in the ground and are getting started, but it's going to take some 90F weather for them to really take off.

If you don't get a lot of 30C and higher temperatures during your growing season, you are going to have to pull out all the tricks in the book to convince your sweet potatoes that they are in a tropical climate -- black mulch, a south facing wall that stores a lot of heat, composting, etc. But don't plant them in a hugelkultur. I did that once, and instead of getting lots of nice tubers, I ended up with one enormous (~5 kg tuber) where the plant was started. To get more tubers to form, cover a part of the vine over with dirt, and it will give the plant a new node at which to start making tubers.
wayne fajkus
gardener

posted 4 years ago
I think it's too soon. To plant the slip That is. Here in zone 7 we plant june? Maybe july?

posted 4 years ago
I am in Boston Zone 6 and I harvested huge 2lbs sweet potatoes tuber. I got my 'starts' from a farm in vermont. In fact they have huge monoculture sweet potatoe farms in Vermont. http://www.washingtontimes.com/news/2015/may/22/vermonts-largest-sweet-potato-farm-receives-20000-/

Tobias Ber
Posts: 525
Location: Northern Germany (Zone 8a)
25
posted 4 years ago
thank you very much... i think, i ll start by putting slices of sweet potatoe indoors. i ll bury them in soil, in a black pot, covered with a plastic bag. that i ll put onto a sunny window sill. it should heat up enough.

we seldom get above 80F here in summer. the northern part of germany is situated between the northern sea and the eastern sea. last summer, temperatures were mostly around 62F and it was raining most of the time.

i ve seen a video of a guy that grew it in a huge planter to pretect it from voles. not sure if i m gonna try that, but one could make a grow bag from sturdy, black landscaping fabric. like the sepp-holzer-sausage. one could sew these by using an office stapler to make the seams. in late autumn, you could wrap that in bubble wrap.

posted 4 years ago
Thank you Tobias for sending me the link to this thread.
I think the climate zone here is about 7, but not comparable to any part of the USA. The Dutch climate is very rainy, all year round. Even in summer a week with seven all sunny days is rare. Temperatures are never high and never low. Last few years there were only some freezing days in winter (December-February).

I understand it is not yet too late to try out planting some parts of sweet potatoes, to see if they'll sprout out. Some years ago I did that and it worked. But then I did not yet know how to do ... and the plant died

posted 4 years ago
I tried sweet potatoes last year here in zone 4a. They didn't do very well but we did get some tubers. 7 lbs from about a dozen plants. If I wanted to I'm sure I could do better with some low tunnels or other heat enhancing techniques.

David Livingston
pollinator
Posts: 4328
Location: Anjou ,France
243
posted 4 years ago
Well I must be doing something right as I have flowers

Does this mean I will get less potatoes ? Also when should I harvest 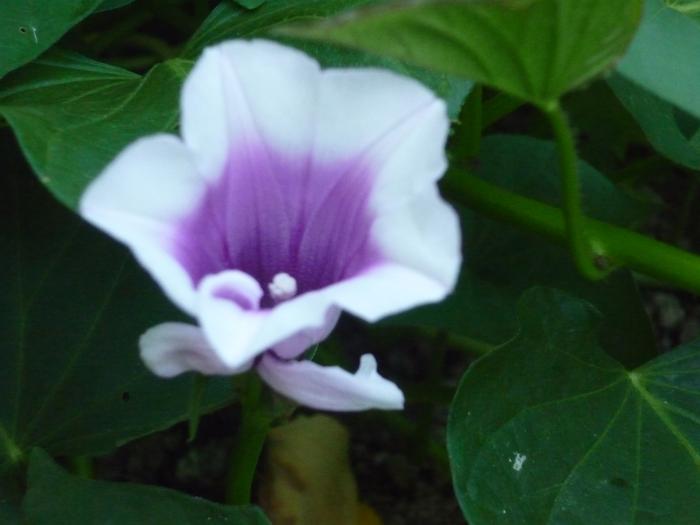 Tobias Ber
Posts: 525
Location: Northern Germany (Zone 8a)
25
posted 4 years ago
update:
i have put three plants into a big tub in a greenhouse. they start to take off now.
i buried the sprouted potatoe pieces and did not seperate them into individual slips (or how you call them).

i used some of the leaves to make a small spinach-like dish from them. it tastes quite ok.

Mike Turner
pollinator
Posts: 452
Location: Upstate SC
62
posted 4 years ago
Sweet potatoes commonly flower late in the summer.  I harvest when daytime highs in the Fall fail to reach 25 degrees C on a consistent basis, but before any threat of frost.  After lifting the tubers, they will need to cured for a week at a temperature of 27 to 30 degrees C to turn their milky sap into sugar.  I normally lay them out in the sun in my greenhouse for a week before storing them in my cellar at 15 degrees C.  When harvesting the tubers, you can also collect the leaves for cooked greens and canning.
André Troylilas
Posts: 163
Location: North of France
8
I like...

posted 4 years ago
Last year, I totally failed at growing sweet potatoes in zone 7 (got lots of greens, but no tuber).
This year, I grew "cold climate" ones outside, and Murasaki in a greenhouse.
With the very good advice I see in here, I hope to get some tubers.
Mike Turner
pollinator
Posts: 452
Location: Upstate SC
62
posted 4 years ago
Factors that can cause you to have leaves, but no tubers include, too much nitrogen in the soil, too short a growing season for the cultivar, and droughty conditions limiting the growth of leaves.