posted 4 years ago
Let's play a game of talking photos of your fully or mostly home-grown meals and label what it is and what you grew.

Here I have rhubarb-flavored raindrop cake, herb sauce for meat and rice, mint water with violet ice cubes, garden salad, and the base has a rhubarb flower. 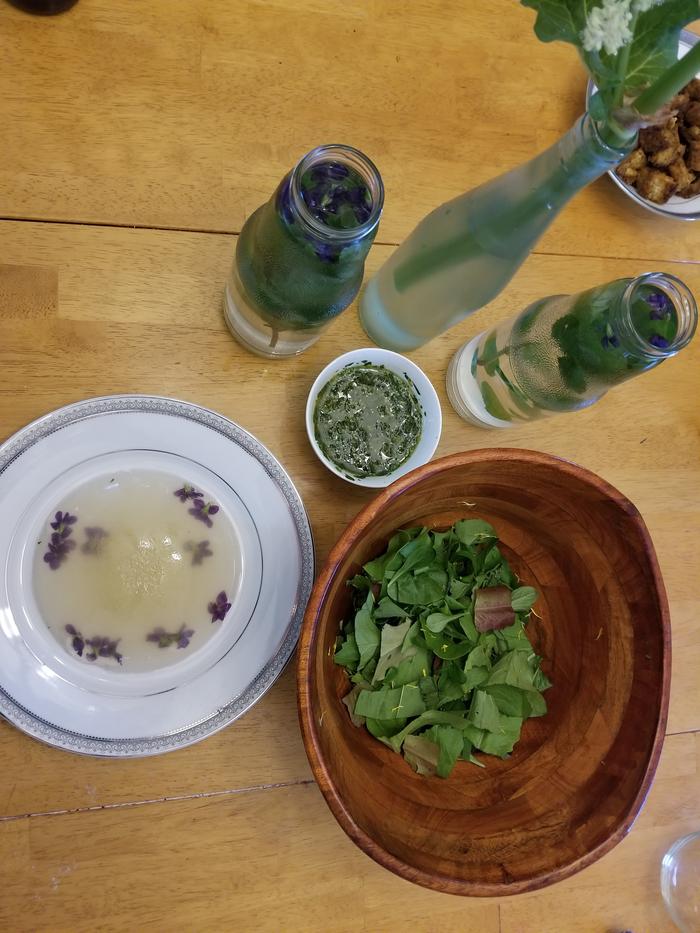 posted 4 years ago
I dearly want to participate in this, but unfortunately the only thing I can grow where I am is table herbs. 95 percent of what I could make outside of herb blends would be non-homegrown.

I've wanted to try making a raindrop cake for a while, but not gotten up the gumption. How was it?

posted 4 years ago
The raindrop cake tasted like jello and rhubarb, but it wasn't really the best flavor dessert I've ever had.  I think I'll make it with a drop of vanilla next time.

The first two pictures are herb flowers and garlic scapes I used in a dinner recently.

The third is a spicy greens and herbs chutney I made as a meat and rice sauce.  It's made of Indian mustard, lamb's quarter, garlic greens, horseradish greens,
Turnip greens, tarragon,  oregano, thyme, sage, and chives from the garden,  plus some salt, lemon juice, and olive oil from the store.

The fourth is bread that I cooked with herb flowers in it for flavoring.  You can't tell they are there unless you have a smelliphone. I couldn't get the yeast, flour, water, salt, or oil locally yet though.

posted 4 years ago
Mint and chip mousse. The mint is from the garden.  We first soaked the heavy cream in chopped mint, then we strained it, whipped it, added a touch of sugar and some chocolate chips, then more fresh chopped mint. A total of 3-4 cups mint was used to 2 cups cream and about 1 tbsp sugar, and 1/2 cup crushed chocolate.
20180529_174515.jpg 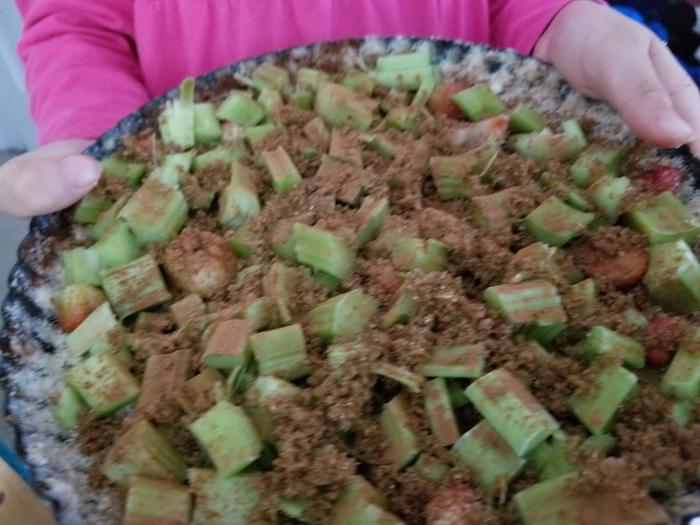 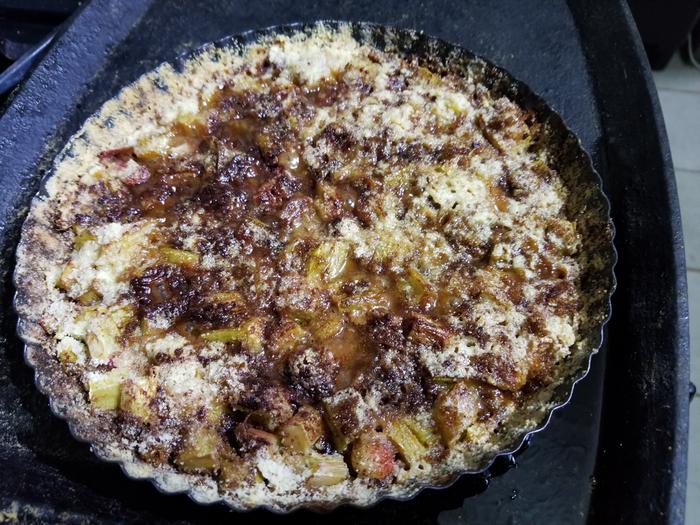 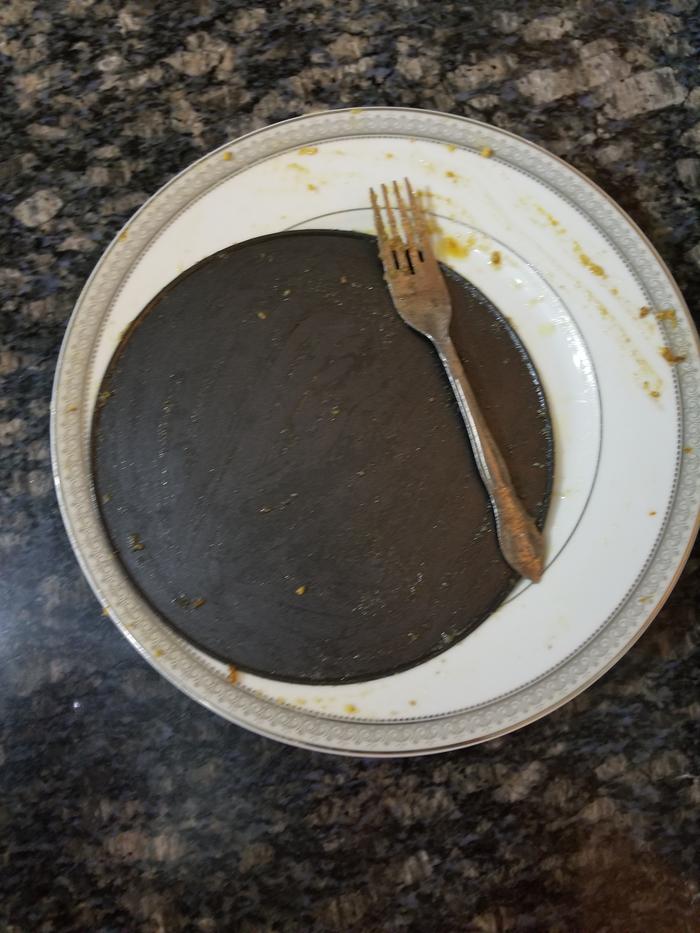 posted 4 years ago
"I'll be right back. I just have to harvest lunch."

I topped it with a caesar salad dressing and feta cheese (store bought). 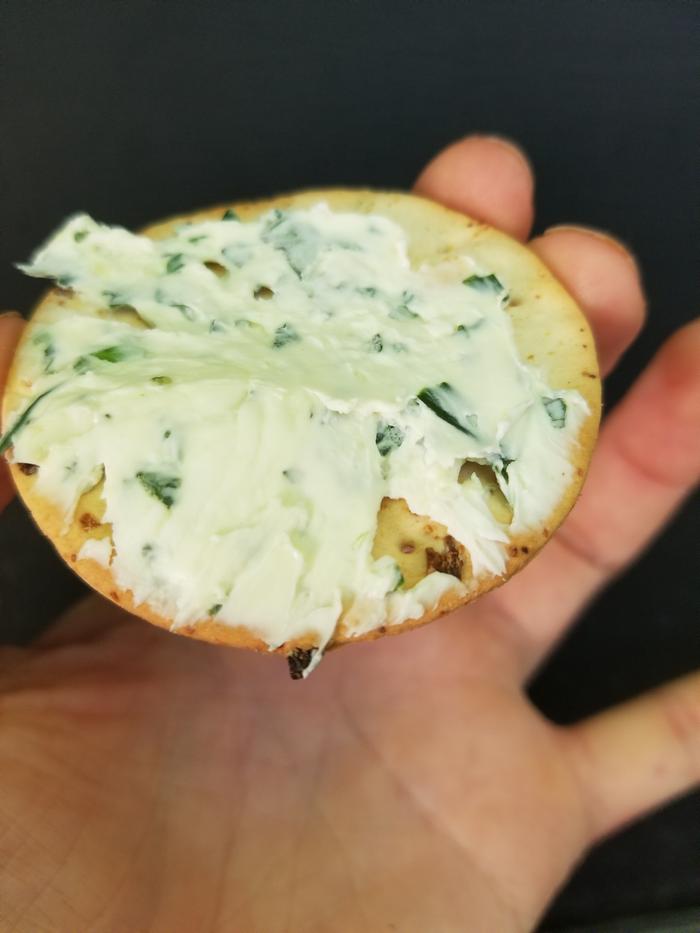 posted 4 years ago
Rhubarb black raspberry pie with a walnut crumble topping. Rhubarb was the plant I didn't know I needed.
20180705_081217.jpg 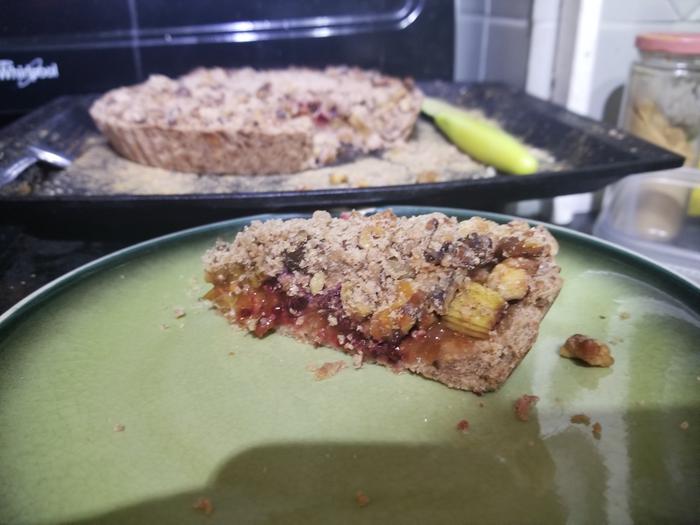 Posts: 5930
Location: Cache Valley, zone 4b, Irrigated, 9" rain in badlands.
2505
posted 4 years ago
My lunch today. The vegetables from gardens I tend.

And from the store:
pork,
coconut oil.

I totally forgot to add spices or salt. It was too tasty to notice they were missing. The pan still had some garlic/ginger oil left over from last night.

posted 4 years ago
A friend suggested I try breading and frying my elephant garlic flowers.  It was a hit. They beat chicken in leaving the platter, which is pretty hard to do in this family.
20180709_201117.jpg 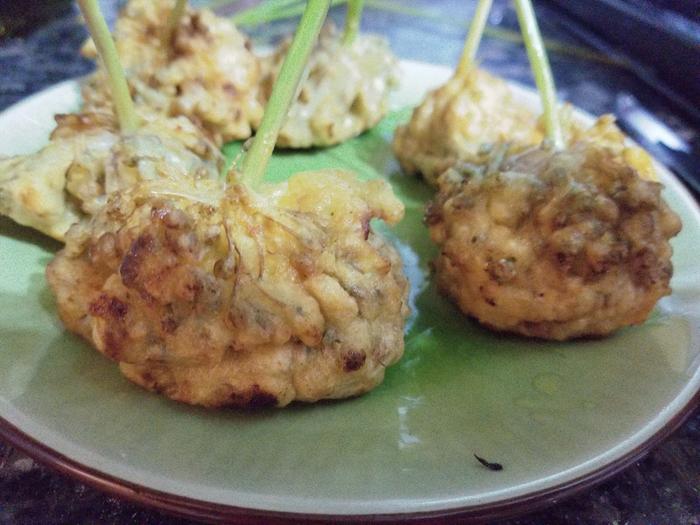 posted 4 years ago
Every once in a while I have a mostly garden meal. I wish it were more often.  Part of it is my thinking (learning to cook what's on hand), part of it is still getting this place up to production. When "they" say it takes 3-5 years,  "they" mean it!

The first item on the menu was soup. The chicken bones and mushrooms and some of the veggies weren't mine. But most of the veggies were.  You can stick all sorts of odd edible things in soups, like turnip greens, and they enhance it.

The second was beet green salad.  My crummy soils and lack of sun makes many of my beets just never bulb, so rather than eating the roots, I eat the tops. I put in some green onions and topped it with candied walnut crumble and a honey mustard dressing.  Yum!

Then there was the green beans.  This is the first year I've grown beans for the green bean instead of the dry beans and I'm pleased. I was so pleased I made it into it's own little dish. The only thing I didn't grow was the oil to grease the pan.

Last, not shown here, is rhubarb crumble. I'm still working on my recipe but so far they've all been eaten, even if they were mediocre. Catching these dishes on camera is like video taping a sasquatch.

posted 4 years ago
The tomato plate... everyone has one during tomato season, right? But I'm pretty sure I'm the only one in Ohio who also has fresh garden figs on it. Yes, there's also okra and basil. Salt and pepper to taste.
20180805_210052.jpg 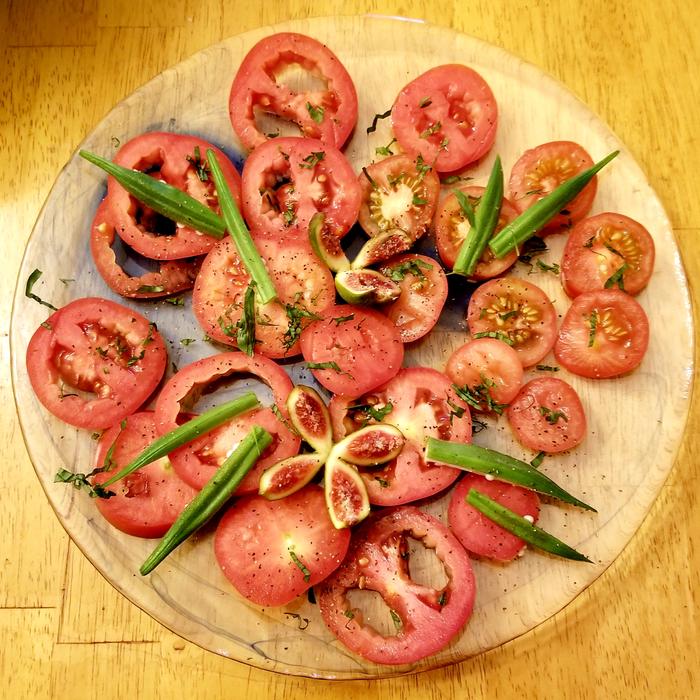 posted 4 years ago
I finally have something to post!

I had a tiny crop of yellow transparent apples on a tree when I visited my property last weekend.  Made applesauce in the IP last night and today I had three jars.  It was an experiment and I don't love the apples as well as some others but it's still much better than anything you can buy in the store.  Froze two pints and will eat the other soon - downside of recycled jars is when the lid style is abnormal and you throw out the lids.  Have to settle for saran wrap and a rubber band!

If I get lucky and time my next property visit when the Prima apples are ripe, I plan on canning a bunch.  And hoping to have ripe blackberries for the freezer (tail end probably) and some Italian plums to enjoy fresh.  <fingers crossed> 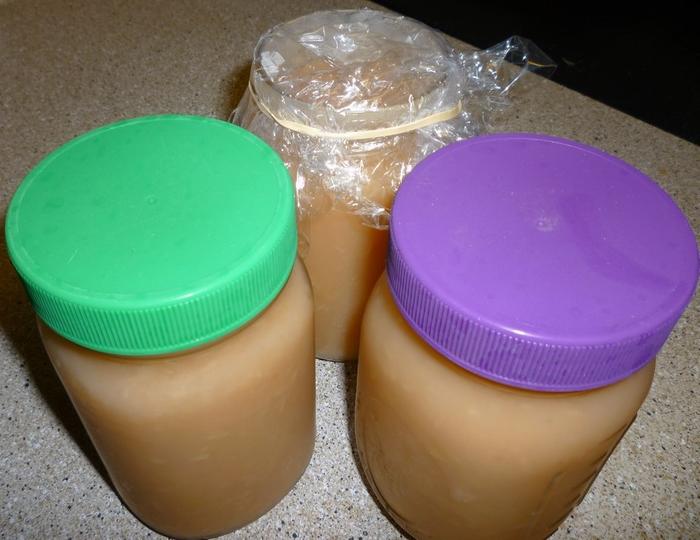 posted 4 years ago
Lots of canning this weekend.  I made applesauce from my own apples and jam and sauce from plums a coworker gave me.  (I have some plums in the fridge from my tree that will slowly ripen and I will eat fresh.)  I canned some blackberries to send to family and some peach jam from locally grown peaches.

I look forward to being there full time some day and having more greens to share.
P1030062.JPG 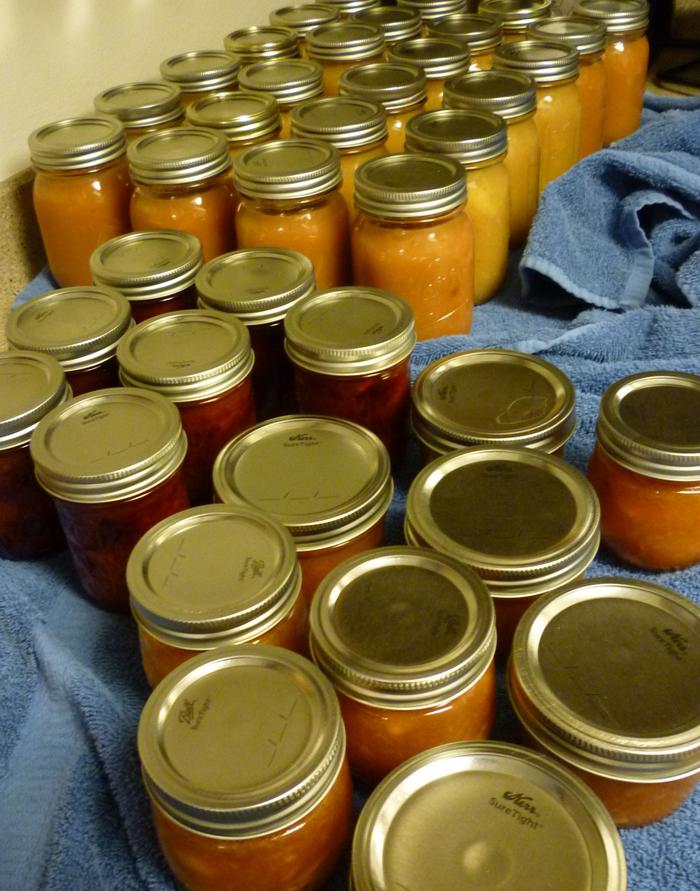 Karen Pedersen
Posts: 16
Location: Denmark
3
posted 4 years ago
@Amit Enventres Do you have a reciepe for the babaganoush?
Amit Enventres
gardener

posted 4 years ago
Yes Karen! The way I prepare it is by roasting the eggplant on a flame until tender.  Then I peel it and plop it in the blender.  In with it is lemon juice,  salt,  tahini paste, and olive oil.  I'd say about  1/4 cup lemon juice and 1/8 cup tahini. I blend until somewhat smooth and slightly chunky.

posted 4 years ago
This cabbage salad is topped with treats from the year and an apple cider vinegar + local honey dressing.  For a nutty crunch we have maple seeds,  for sweetness we have the remaining stragglers of beets raw and finely chopped,  to tie it together there's dried elderberry and for an herby touch there's dried basil.  The cabbage is from the farmers market. My cabbages still need ....uhm...."time."
20181101_180715.jpg

posted 4 years ago
My husband decided he likes dinners with hats. (Pumpkins with their lids).  This is stale bread turned into toasts topped with home-grown roasted garlic, olive oil and salt, the cabbage salad as a delish garnish,  and home-grown pumpkins stuffed with basement-ripened tomato sauce and sausage. I thickened the sauce with some store bought red lentils so it was nice and chunky.

My favorite part of beautiful dinners like this is bragging about the price: served 4, total cost: $5. 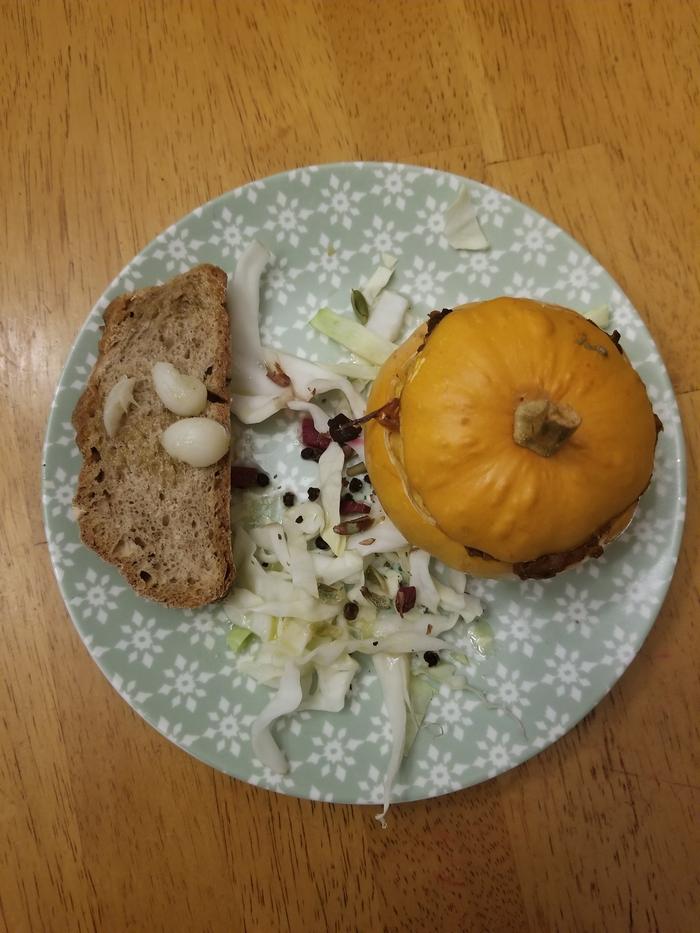 posted 4 years ago
Start with dessert? Why yes!

I grew what I thought was one type of pepo squash but it turns out it was promiscuous, probably with a zucchini. Next year it will be even more unusual because a small ornamental vigorously took over the back forest. Anyway, it still makes good pie and toasted seeds. It works out to one pumpkin per pie, which is convenient. The crust was supposed to be acorn, but I didn't leach it well enough in time, so I grabbed pecans for a pecan crumble (store bought,  though they do grow locally). To fill the plate I added some home-made apple sauce. (Apples from a local orchard ). Hopefully once the homestead matures it will all be MINE!! Muhahaha!

The greens are amaranth, chive, and thyme...then because I could, I threw in some echinacea petals and catmint flowers.  We finally chopped it for a topping to our hot dogs. It was super yummy!

posted 3 years ago
Poppy seeds and sesame seeds aren't the only types that can decorate bread. In fact, these lamb's quarter seeds are nearly indistinguishable from poppy seeds in appearance.
20190302_192907.jpg

posted 3 years ago
Because I deal with hard soil and short growing periods, so sometimes I get puney carrots. What do I do? I add them to broth or marinate and roast them whole.
20190302_192826.jpg

posted 3 years ago
I made a dish of stirfry butternut (garden grown), apple, pumkin pie spices, and pecan. It wasn't a hit. I chopped it fine, added flour, egg, baking soda, baking powder, sugar, more cinnamon and the like, a little oil, and wahlah! I couldn't pull out my camera faster than they were disappearing. I also didn't tell the 6 yo that she was eating the dish she refused the night before, with a little added ingredients,  until she was already  1/2 way through her first cookie.
20190306_115146.jpg

posted 3 years ago
Dandelion green quiche! Dandelion's bitterness totally disappeared in this recipe and it just tasted like a delicious spinach quiche. The basic ingredients to this quiche are: lots of cheese and butter, several eggs, garlic powder and salt, and a big bowl of dandelions. Mixed, (best to chop the greens) and cooked until the eggs solidified and the cheese got slightly crispy.
20190423_192706.jpg

posted 3 years ago
Chouriço omelete, favas and chard with sauce. 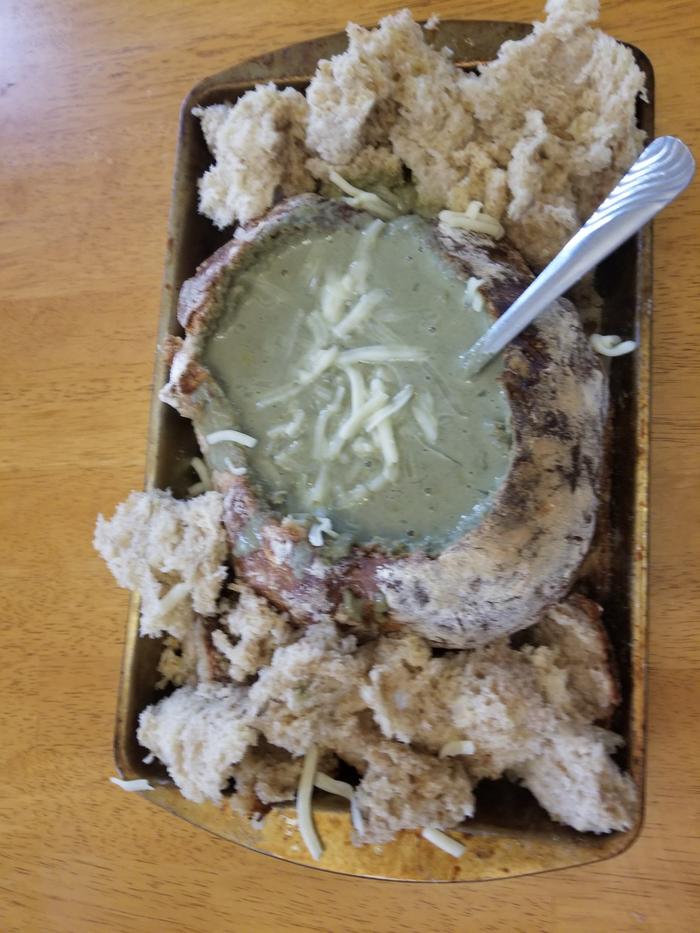 posted 3 years ago
The green stuff in the tabouli is from my garden. Mint, French sorrel, and chives.

The rain drop cakes are jello with a little vanilla extract  and an edible flower inside.  They are a fun dessert or Mother's Day treat.