posted 8 months ago
This is a badge bit (BB) that is part of the PEP curriculum.  Completing this BB is part of getting the wood badge in Gardening.

In this badge bit, you will build a 7 feet tall, 7 feet wide, and 24 feet long hugelkultur bed.

Here is is video of a smaller hugelkultur bed being made Sepp Holzer-style.

From the video transcript:
"In cooperation with the association PermaVitae, the town of Übelbach has created the 'edible community'. And in this context there were built raised beds next to the elementary school. I liked the idea, because it's very natural and because only biomass is used. There aren't used any fertilizers and the plants grow as they want. Since I was thinking of expanding my own vegetable garden, it seemed like a good opportunity, and Jonny Peham fortunately offered to help us.\ And finally we are building now! In the beginning we removed the turf - made a shallow pit, and there we assembled the biomass and the branches. We make kind of layers in putting earth between the branches, so it won't collapse no freshly cut wood, like willows, alders and such, because this would bud through. We now need this kind of wood nails. Someone could already prepare this... This one is almost too thin, but they can be that long, then cut it angular, like this. Could you try to wiggle a bit? We now put on the branches, which are well ramified, so the earth is stabilized, since it is quite steep. This will then be stabilized with branches and wood nails, so it won't erode when it rains. When we're finished we put in the seeds, followed by a layer of mulch. Here we take out salad seeds, and throw it in. Some onions, salad, garden radish, sunflowers, spring garlic and spring onions as well. This is kind of a winter coat, which also becomes a fertilizer, and it protects against the rain...But hopefully it won't be too windy now.."

Hugelkultur is basically gardening on buried wood.  It is laid out very well in this Richsoil Article.

To document your completion of the BB, provide the following:
- Two pics of the site before the work is started with the intended location marked out.
o probably marked with wood laid on the ground that will soon be buried!
- Three pics of three different stages of construction - showing the contents of the hugelkultur
- Pics of all the stuff about to be planted
- A paragraph or two of what wood was used and where it came from, what was planted, what mulches were applied and anything else interesting
- A picture at the start of the hugelkltur with a walking tape measure starting at zero
- A picture at the end of the hugelkltur with a walking tape measure ending at 24 feet or greater
- Two pics of the site after the work is complete from the same two locations as the beginning pictures.
o include some people or something in the pics so we can gauge that the size is probably correct


Clarifications:
- You may use an excavator or other heavy equipment if needed.
- if you dig 3 foot deep trenches on either side of the hugelkultur spot, you can use that soil, mixed with wood, to make a hugelkultur bed that is 4 feet above grade but 7 feet tall relative to the bottom of the trench. That is one way to satisfy this BB. 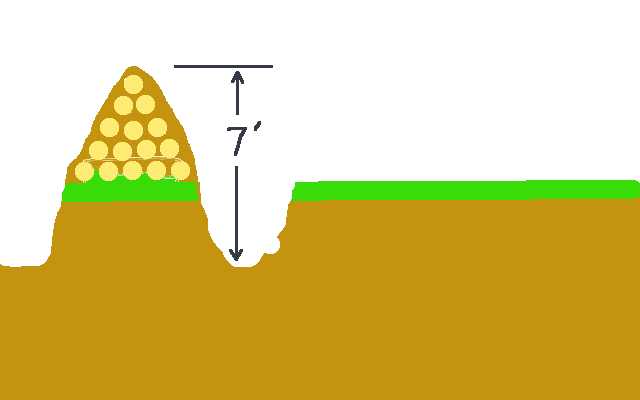