Nacho Collado
Posts: 43
Location: Granada City (that's in the south of Spain)
7
posted 7 years ago
i live in the outskirts of my city and in the fields there were some mullein plants, i used to spread the mullein seeds while walking with my dogs and now there are mullein plants everywhere. still have not any mullein plant in my piece of land, so i will seed some seeds next autumn.

see our piece of land in our blog http://lavegaentransicion.wordpress.com/

Steven Feil
Posts: 242
Location: South Central Idaho
2
posted 7 years ago
If you have access to that other land with the mullein, then maybe you should just take advantage of that.? Mullein is pretty well behaved, but maybe there is something else you could put there that you don't have access to?
Dan Boone
gardener

posted 7 years ago
I found one of these plants on the back corner of the property last fall, and wondered what it was. Then last week I spotted another one next to the mother-in-law's propane tank. By sheerest coincidence, a few nights later I was laying awake one night because of chest congestion from spring allergies, and passing the time looking at "weed" identification photos on the internet. Figured out it was mullein and that it had medicinal uses relevant to my current interests, LOL.

So I grabbed some leaves and made tea. Was surprised that it actually tasted good! My congestion got better, too; but then, it would have anyway, eventually. I'm now a mullein fan even if I have to grudgingly credit the possibility of a placebo effect or of the "post hoc, ergo propter hoc" fallacy.

By the time my congestion mostly went away, the plant I was stealing leaves from in the yard was looking pretty threadbare. So just today, I went to check on the plant I first found, at the back of the property. It was still there and doing fine, so I harvested a couple of more leaves in case I need some more tea in the next few days. Then I looked around and found three huge dried spindles from last year's flowering. Shook them into a ZipLoc and now I have a few tsp of very fine seed. Must decide where to plant them now.

paul wheaton wrote:I think this may very well be the best movie ever about mullein:


at around 7min he talks about olive oil with garlic and letting it sit for weeks or days...DO NOT EAT THIS. I have no idea how safe it is as a topical but garlic is a botulism host and the anaerobic conditions in the oil will make it very dangerous very quickly.
http://theolivepress.com/blog/be-aware-of-the-risks-of-botulism-with-homemade-garlic-infused-oil
Steven Feil
Posts: 242
Location: South Central Idaho
2
posted 7 years ago
I did not go back and review the video but I believe the infusion is for ear aches. There is actually NO reason to infuse the garlic for that purpose. The freshly pressed garlic juice can and should be used instead. Either that or onion juice and save the garlic for more useful purposes (like EATING!)
ellen rosner
Posts: 153
3
posted 7 years ago
Someone had had trouble growing mullein from seed. I was spread them over an area and got nada. What works for me is -
"winter sowing"
last year - in the winter I prepare thus: a plastic container (the bottom half of a water jug), holes in the bottom, a top made of plastic (holes),
fill 3/4 with dirt. Plant seeds. cover if required.
Place outside and leave 'em til they sprout.

I had a lot of success with this method.
also grew for first time the purple mullein which didn't bloom this year, guess it will next. Can't wait to see it.

if you want more on winter sowing (which can be used for anything - adjust the time you put outside )
http://www.wintersown.org/

amy colbert
Posts: 1
posted 7 years ago
I have three volunteer mullein at the foot of my driveway, and one is seven feet tall with multiple flower stalks. They are growing out of a margin of soil along cobblestones where they get full sun, and no additional water or compost/fertilizer. They seem to thrive on neglect, and i suspect cultivating them in rich soil would be a failure. I have had many passers-by ask me what this "beautiful, stately" plant is, and when I tell them its considered a weed, they are astounded. Mullein was an ornamental garden plant in Victorian england, so i feel justified in keeping it in such a visible place. It makes a very helpful ear drop for those who have recurrent swimmer's ear. Its deep taproot is helpful to soil. The long stalks can be dried, and then dipped into tallow or wax to make a candle or slow burning torch.

Also, there are mullein hybrids that are valued ornamental garden plants that have lovely pink/lavendar blossoms.
Miles Flansburg
pollinator
Posts: 4696
Location: Zones 2-4 Wyoming and 4-5 Colorado
475
3
I like...

posted 7 years ago
We cut off the seed head of a mullein in our yard in Colorado, to take up to Wyoming and get some growing there. I noticed today that it had put out dozens of new seed heads. I had never seen that before. I Just thought I would post a picture to let you all know that you can increase flower heads by cutting off the main flower.
001.JPG 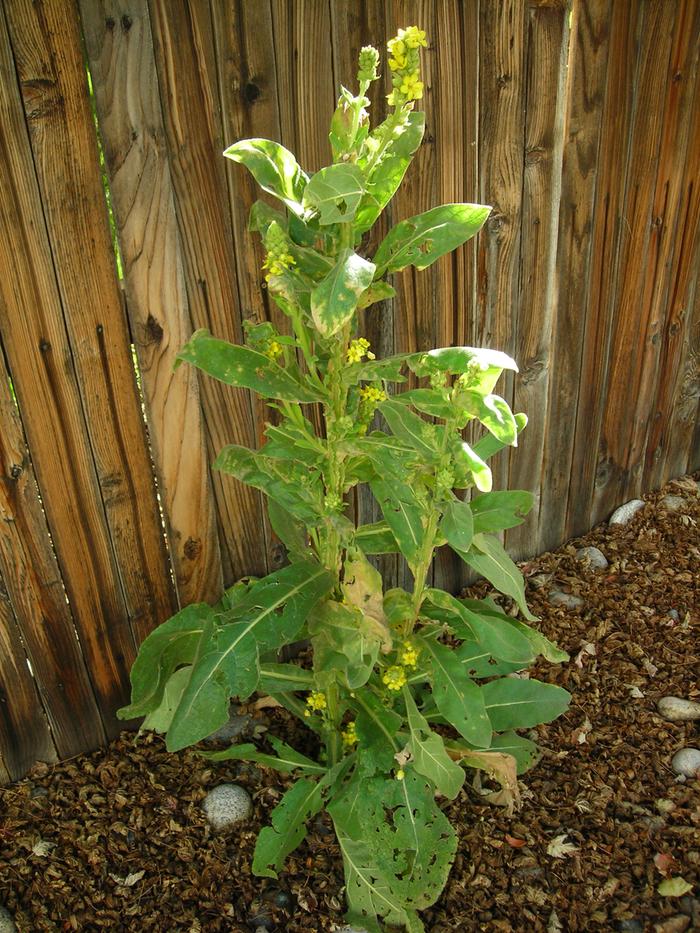 ellen rosner
Posts: 153
3
posted 7 years ago
Yikes! another use for mullein. I didn't write the source down, but it says for pain in the body: "steep the leaves in boiling water, and lay on affected area (when cooled down).
Use plastic wrap to keep them on, and keep the moisture in."

I don't like the idea of using plastic, but I can't think of what else. Any cloth would absorb the moisture. Maybe tin foil.
Jessica Gorton
Posts: 274
Location: Central Maine - Zone 4b/5a
26
posted 7 years ago
Ellen, I'd use wax paper in place of plastic wrap.

posted 6 years ago
Maddie was recently at Wheaton Labs and tooks a bunch of great pictures. You can see them all here. But here is a sweet one of Davin with some giant mullein!. 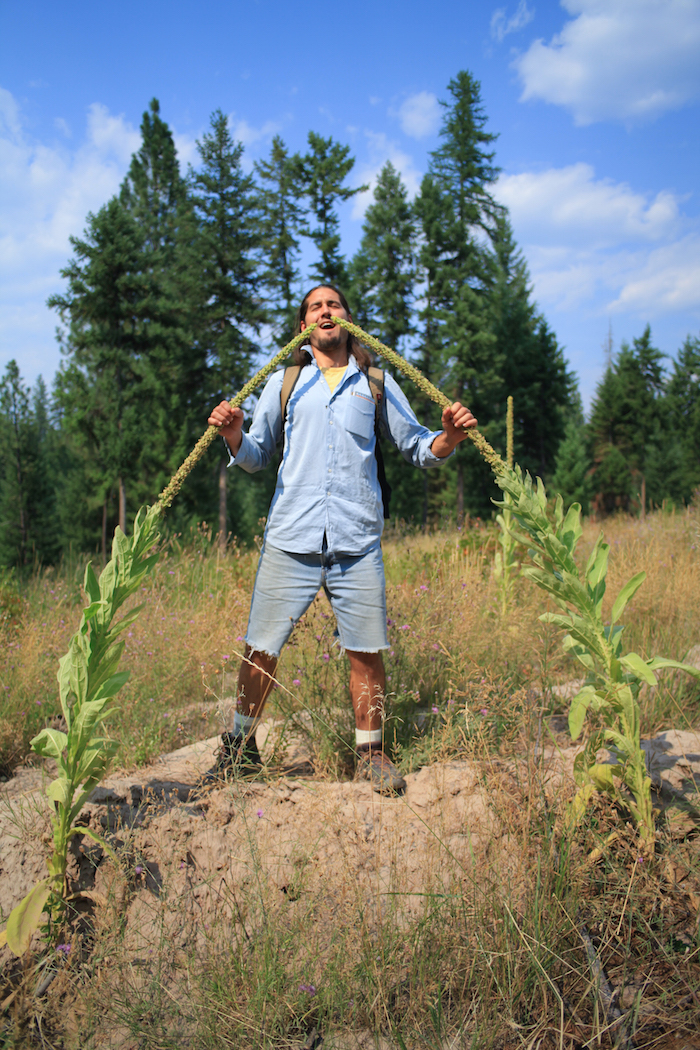 Just as I was about to transplant all my little mullein seedlings to form a 'garden' around our composting loo, I read this ....

"Mullein tea is made from the leaves of a 1st-year plant and is considered a good cough suppressant. A similar tea can be made from the root after cleaning, peeling, and dicing. Although the leaves feel soft and fuzzy they do not make good "wild" toilet paper as the small hairs can get stuck in your skin which is very uncomfortable."
http://www.foragingtexas.com/2006/12/mullien.html

I recall Paul Wheaton specifically advising that one goes "with the grain" when wiping with mullein leaves. That way the hairs dont get embedded in your *sensitive places". Sounds like solid advice to me.

shannon stoney
Posts: 5
posted 1 year ago
I would be cautious about using mullein leaves for toilet paper. The little hairs on the leaves can be irritating to sensitive membranes.
Jubilee Fly
Posts: 15
5
posted 1 year ago
I love mullein. I add the the dried leaf to my tea if I have a scratchy throat. I add it to my earache oil. I've used the stalks in my 1st little rocket stove.  It grows wildly all over here.
It is not native. The local invasive plant species organization said its not a good idea to plant.