How to move a shipping container?

Dominic Thompson
Posts: 1
1
posted 10 months ago
I'm looking to make a home out of a 20ft shipping container. It needs to be moved from the roadside, across about 150m of wetland to a little wooded area where it will stay. Fortunately, the ground is still frozen in this part of Canada, but there is snow about 2ft deep and dead reeds/grass to contend with. The terrain is on the whole flat, besides the hummocks from the reeds.

Does anyone have some ideas on the best way to do this? I know nothing about construction equipment, so any advice is appreciated. I would have thought this kind of thing would be easy with modern machines, but I don't know what type. Surprisingly, the people who sell the shipping containers don't seem to have any idea either!

Attached are some pictures so you know what I'm talking about.
InkedDesired-location_LI.jpg 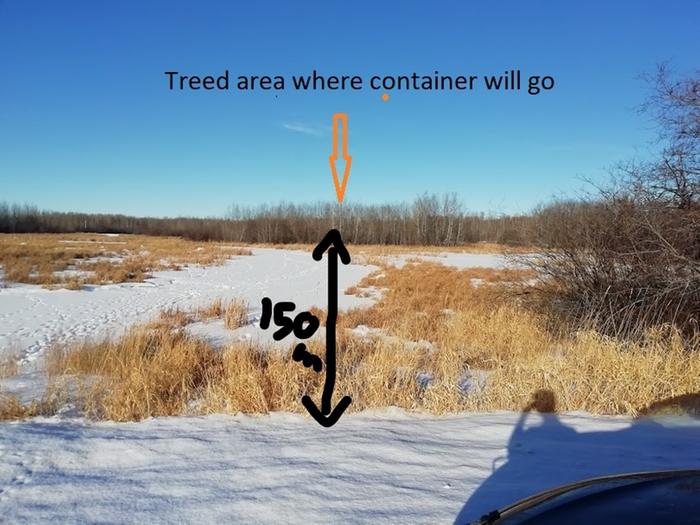 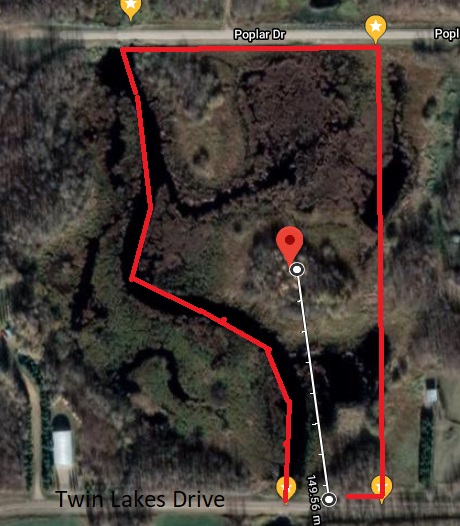 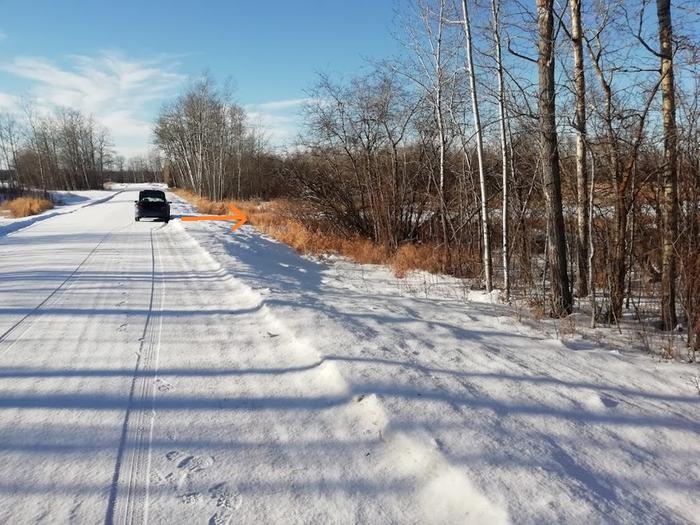 posted 10 months ago
Hi Dominic;  Welcome to Permies!
I think a medium size dozer would walk right in to where you want your conex.
I assume you would want a road of sorts anyway.
Hire a dozer with operator to pioneer you a road.
Have him on site when the container company shows up. You might need him to assist the delivery truck in or out or both.
Money well spent.

posted 10 months ago
How about a 160m rope tied to the trees and a come-along.

I don't really know how heavy a 20' container is but I'm guessing they aren't horribly heavy...

Walt Chase
pollinator
Posts: 258
Location: ALASKA
34
posted 10 months ago
D4 or comparable sized dozer, couple of chains and maybe some type skids under the front of the container so it doesn't act like a dozer blade and push up snow or dig in.  Alternatively a tractor with chains on the tires, roller poles or skids and pull it like With a dozer.  Most 20 ft containers weigh between +- 4 and 5000 pounds.  if you have 2 ft of snow right now it would be best to walk it down with the dozer or tractor first.
Scott Foster
pollinator
Posts: 888
Location: 6a
269
I like...

Here he's moving a container with a backhoe and chains.

posted 10 months ago
Some years ago we used a 20' container as a moving container. Moving when full is totally different from moving when empty!

When we sold it, a flat bed tow truck was able to winch it onto the bed and take it away.  It did require an experienced tow driver since its not an everyday affair.

I've inquired about acquiring such things in my area and the sellers have some wheels they can add to the tail of the unit so it doesn't drag.  But you've still frozen earth so its both low friction and it won't bog down.  Dragging shouldn't be a problem - so as suggested a dozer or a (serious) backhoe should be able to skid it along. A really beefy tractor would work too.  A large telehandler with chains would get it done as well.  I'd think it would work better if you could pick up the front.

So ... call the local rental yard and ask them what's available?  Or time to meet the neighbors?  Many neighbors love to feel useful with their big machines - just compliment them early and often on what a powerful machine they have and how good they are at maneuvering it!

Mike Haasl wrote:How about a 160m rope tied to the trees and a come-along.

I don't really know how heavy a 20' container is but I'm guessing they aren't horribly heavy...

The linked video of the backhoe, looks like he has a container dolly or flatbed under it. Big difference vs having it on the ground!


A 200 size excavator can drag a 45' high-cube around alright. I think my 150 would be working pretty hard at the same task.

Bryan Elliott
Posts: 84
Location: Oklahoma Panhandle
14
posted 10 months ago
The linked video of the backhoe, looks like he has a container dolly or flatbed under it. Big difference vs having it on the ground!

It was hauled in on the trailer.  He pulled it off and then pulled on the ground.
Doug Steffen
Posts: 20
Location: Alaska, South Central
4
I like...

posted 10 months ago
If the ground is frozen. Chain it up and go.
It took us about 1 hr. to drag a 20 footer, 2.5 miles last week end. We plowed the snow off the trail 2 days earlier and let the trial set up, and then hooked a chain to the front corners of the box and to the back of a dozer. We got stuck once going up a hill when the snow started piling up in front of the connex. so we unhooked the chain, moved the built up snow, and we off again. This was the 2nd one I moved into the property. We broght the first one in last winter.
Doug Steffen
Posts: 20
Location: Alaska, South Central
4
I like...

posted 10 months ago
This is in Alaska, last weekend
IMG_0833.jpg 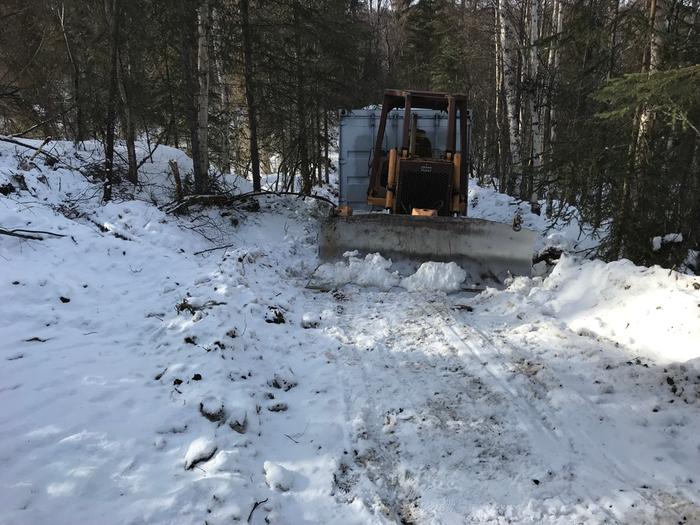 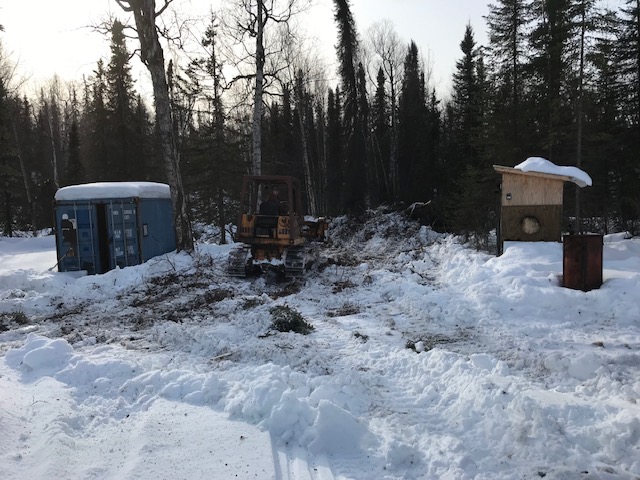 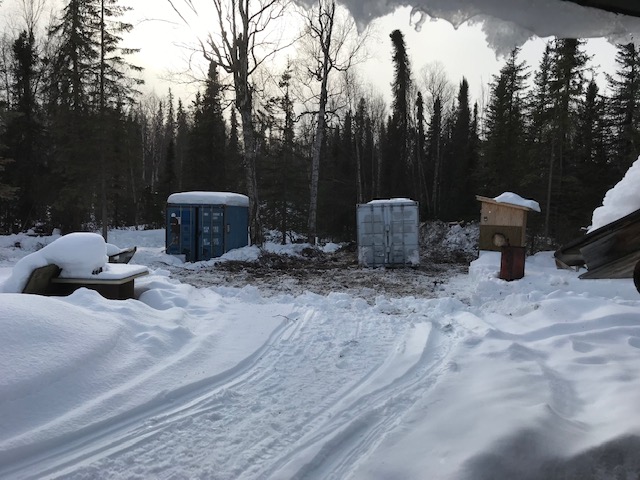 posted 10 months ago
Any large farms near by? We had our 40' container pulled by a farm tractor. It was late spring and ground was still a little soft but it went fairly well.

"may your experience be fruit for all those who follow"

posted 10 months ago
I have lifted them onto round poles and run the container across them.
A 20 footer may need 6- 150mm poles

sydney black
Posts: 3
posted 4 days ago
I suggest you get in touch with companies that may be involved in moving such shipping containers. There are many factors to be considered when hiring such containers such as the size of the container and the distance. It can be affected by the prices for the same. Simple transportation to a nearby location won't be that much of a big problem instead can be cheaper compared to long distance. I had a similar problem while I was shifting my house as I had an office that was set up in a shipping container customized. The difference is though the company from which I purchased the container had services of moving them where we wanted. Although it also has a similar factor to be considered such as the distance as the more the distance an extra amount has to be paid. I hope you take your time on considering the factors before taking any decision.
Steve Harvey
Posts: 201
Location: Ontario
11
posted 4 days ago
From my research, I have done on shipping container tiny homes, I have found that shipping containers aren't the best in our climate for a home. Due to the thermal conductivity of metal, you are going to have issues with condensation on the inside walls of the container when heating it. I would suggest only using the container as a workshop or garage and look into getting a larger yurt for a home. Yurts have been used for thousands of years in cold climates and are much easier to move and build in remote locations. If you had to move this container I would recommend buying a properly rated float trailer and just leave the container home on the trailer permanently so you can move the container around later if you find the location you choose may not be the ideal location for a home. Also, consider the location and direction of the container, you will want the long side of the container facing south in a sunny area so you can utilize some passive solar heating with windows facing south. Maybe even build a walipini facing south attached to the side of the container for free solar heating, and a grey water system. Steve Harvey
Posts: 201
Location: Ontario
11
posted 4 days ago
Here is an idea I had for a yurt and shipping container home in Ontario.

posted 4 days ago
Wetlands are relatively rare where I live, so I'd be leery of having heavy equipment in one, damaging the ecosystem.

I've moved a couple buildings with a come along.  One of them was a stuccoed shed we moved about 50 feet. We jacked it up and attached poly covered skids to the bottom. On the ground the shed was to slide over we had 2x12s, also covered in poly. We sprayed soapy water on the poly covered planks cause the shed was probably a bit heavy for the come along we had.  Not sure if it was needed though, really.

For a beat up camper we moved, we put it on round fence posts and dragged it over top of those, moving the posts to the front as they became available behind.

Yes, it takes a long time. It's cheap and low impact, though. If you go that route, don't go too cheap with the come along. You don't need an expensive one, but don't get the cheapest, either. You'll spend more time fighting with it than using it.

It doesn't look like you have many anchor points. A buried tire with a chain coming up from it works well.
denise ra
pollinator
Posts: 431
Location: OK High Plains Prairie, 23" rain avg
80
I like...

posted 4 days ago
D Nikolls, do you live in your 20-ft container?