Alone in the Wilderness - The Story of Dick Proenneke

Vester Stevens
Posts: 9
2
posted 8 years ago
I watched this on PBS several years ago and have seen it in pieces and parts on YouTube sense then. Glad it's back in complete form again. As soon as I saw the link I watched it again. It is truly amazing what a person can do if they really want to.

If it ain't broke don't fix it.

When in trouble, or in doubt~
Run about scream and shout.~RAH

mary yett
Posts: 83
Location: Manitoulin Island - in the middle of Lake Huron .Mindemoya,Ontario- Canadian zone 5
8
6
posted 8 years ago
What an inspiration. We can all learn so much from what he did.

I can't help but think the he would have loved building his own rocket mass heater with a heated bench or sleeping platform instead of the open fireplace if he had had the knowledge about it.His comfort level would have gone up. He wouldn't have needed the bags of cement and would have used WAY less wood. He expressed concern for harvesting so much wood without replacing it.

Sometimes I get caught up in the "they used to do it better" mind set, especially considering the non-sustainability of the way we do stuff now. It is refreshing, however to recognize occasionally that there are still positive, innovative improvements being developed, such as the rocket mass heater.
Jocelyn Campbell
steward

posted 8 years ago
Paul loaned out his first "Alone in the Wilderness" DVD and it didn't return.

When he looked on Amazon to replace it, he learned there was a 4 DVD set (<<affiliate link - support the empire!). Neat! 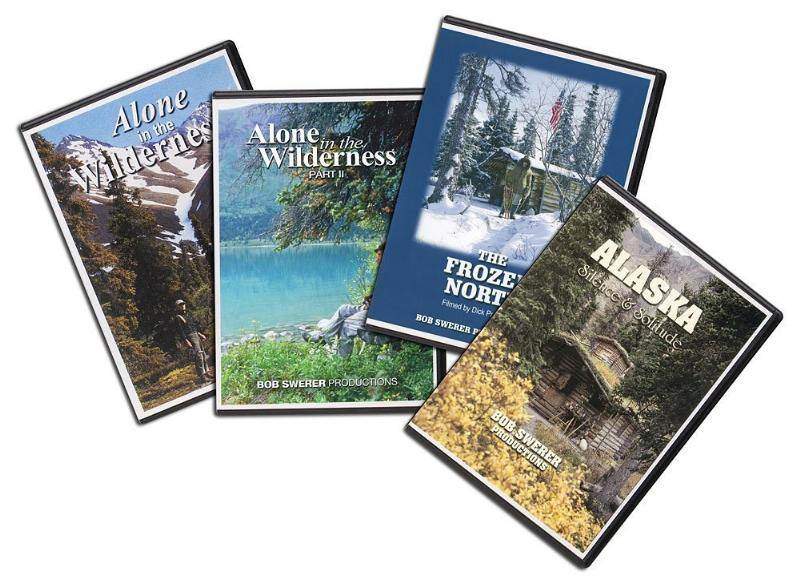 We've had two movie nights at wheaton labs so far with DVDs one and two and the gappers and other folks have really enjoyed them.>

Daniel Gair
Posts: 28
1
posted 8 years ago
This film has long been a favorite of mine. The other great, inspiring homesteading video is "The Good Life" Helen & Scott Nearing's story including video clips of the couple in their later years.
Ludger Merkens
Posts: 171
Location: Deutschland (germany)
4
posted 8 years ago
Hi Paul,
you wondered in you daylyish e-Mail, if the film was legit. You are probably save to assume - yes.
Since I can't access it from germany, as there are some local legal issues with the music contained in the video, (gema problems) we can assume, that youtube already checked the video.

This movie played a big part in my journey towards Permaculture and self reliance. I would say a light bulb going on moment.

It also made me, an IT guy by trade, feel wholly inadequate when it shows Proenneke's arms to be twice the size of mine while I am half the man's age.


A must see for anyone remotely interested in anything that permies.com represents (all the time).

posted 8 years ago
Ludger, if you do not know how to use web browser add-ons or proxies to bypass georestrictions, I can tell you about a few simple things to use in a purple moosage. Just be sure to check local laws so that you do not get in trouble.

posted 8 years ago
I think Tim is pushing "Full Proenneke" status. Hard to imagine Dick pulling it off with littluns in tow.

Dale Hodgins
Posts: 9002
Location: Victoria British Columbia-Canada
699
posted 8 years ago
Dick's story is regular fare on the local PBS station, when they have a fund raiser. You watch Dick, out there in the silence and you get really interested in that moss roof. Then suddenly a lady with a shrill voice comes on with the hard sell for pledges. If you donate enough, they send you the DVD set. Then she speaks more softly just before she's done and we get to see how he finished that roof. I couldn't help thinking that he'd be in deep shit if he tipped the canoe on one of his long foraging trips. I'm sure he had many contingency plans and that he was very careful to avoid enacting them. You don't survive that long out there by making big mistakes.

ben harpo
Posts: 76
Location: Illinois, zone 6b
4
posted 7 years ago
How did he do the roof? How did the Old Believers in Russia do their roofs?

ben harpo wrote:How did he do the roof? How did the Old Believers in Russia do their roofs?

He had a tar paper roof over small log rafters,and I believe he eventually covered it with moss to add insulation.
Ray Cecil
Posts: 125
Location: Taylorsville Kentucky
8
posted 5 years ago
I dont know if I could be alone that long. Maybe if I never knew the love of a good woman I wouldn't know what I was missing. I love my family and friends. I think we humans are social creatures. At least for me, I like alone time, but not a permanent alone time. Seems a bit selfish to me....why not spend time with good people?

The Enemy of progress is the hope of a perfect plan

Ray Cecil wrote:I dont know if I could be alone that long. Maybe if I never knew the love of a good woman I wouldn't know what I was missing. I love my family and friends. I think we humans are social creatures. At least for me, I like alone time, but not a permanent alone time. Seems a bit selfish to me....why not spend time with good people?

I would agree except that recently I realized I've never known the love of a good man. Now I'm torn. I have the little'uns and either they would have to come, or I'd have to wait until they grew. Then I'd have to decide if I wanted to go that far out and miss their adulthoods...I think I've missed my chance to test myself that far. Spending time with good people is priceless; but sometimes not knowing which are the good people makes the solitude a much safer bet.

http://shanartisan.deviantart.com/
One must be sane to think clearly, but one can think deeply and be quite insane. -- Nikola Tesla

posted 4 years ago
I'm getting "This video is unavailable". Is it just my internet signal that doesn't allow it to load, or...?

Karen Donnachaidh wrote:I'm getting "This video is unavailable". Is it just my internet signal that doesn't allow it to load, or...?

I'm not seeing it either.  It looks like it got taken down.

I know that youtube is VERY strict about copyright.  So I feel if something appears on youtube, it is legit.  And sometimes the folks that own the video will allow something to appear for a few days so that folks can get tasted up to go buy it.  Here it is at amazon:


Here is the full 4-DVD set plus the book: