Gopher Woes - Help me not use poison!

I've very excited to be starting a market garden this year. I want to use this time to prepare for the season the best I can. I'm using borrowed land that already has established beds, and irrigation. However, this new homestead/garden was established... on top of a gopher colony.

The owner is a permaculture based homesteader. Her biggest struggle to keep true to her belief system is managing gophers. She has warned me that if they are not mitigated they will take out my crops.

The area where the garden beds are is about 500 square feet. There is a pond, a play area, and a developing food forrest in the surrounding area. There is 8 foot fencing to keep out deer/elk.

I'm introducing chickens on side of this system? Will that discourage gophers from coming in form that direction?

Should I plant 'distraction" crops? What do gophers love?

Do I attract gopher predators/create raptor habitat? I'm worried about my chickens.

Do I get traps? At least it's better than poison?

Thanks for your input!

When you say "gopher" do you mean the little chipmunk-sized ground squirrels, or something larger?
Kc Simmons
pollinator
Posts: 303
Location: Central Texas
102
I like...

posted 1 day ago
Gophers gave me a hard time last summer/fall and, if there's a perfect solution (which there may be) I haven't found it yet. Garlic, onions, chives, etc have been recommended to me as deterrents, but the soft- sandy soil seems to be worth it to them to have to smell the alliums.
The cats out here will eat them if they can catch them, but they have such long & deep tunnels that the cats don't get many of them.
Rat snakes will also eat them, but my rat snakes around here tend to prefer the easy meals of poultry/pigeon eggs/chicks & rabbit kits, so will devastate my populations during breeding seasons and let the gophers, mice, and harder to catch, wild pests spread rapidly.
Raptors tend to eat the snakes, but have trouble getting the rodents due to the ground being covered enough to provide plenty of hiding spots.

Sorry I don't have any solid, proven advice and, I'm going to follow the post to see what others have to say.
I will say they didn't totally wipe out my gardens last year, but I also don't have a market garden & it was already getting near the end of the growing season so it wasn't as crucial for me as it sounds like it is for you.

Right now, I'd say the wild colubrids known for a largely rodent-based diet (around here that's Western/Texas rat snakes) would seem to b the fastest solution for the least amount of time/work, as long as they don't have access to prey that's more convenient to them.
Lorinne Anderson
Posts: 158
Location: Vancouver Island, BC, Canada
61
I like...

posted 1 day ago
I personally have no experience with gophers, but extrapolating from other rodents...would a trenched fence work? Buried mesh or used metal roofing/siding in a 2-3 foot trench around garden area, back filled with gravel (existing soil might be better used in garden?) or existing soil, extending another 3-6 feet above ground level?

It likely would need a few hours with a tiny excavator or a lot of shovel work to trench, but I do think this might be worth it for a permanent solution. In the interim, a predatory dog such as a Jack Russell terrier might be worth looking at.

posted 1 day ago
Here’s my experience with gophers.

A decade ago, when I first started to grow veggies on this land we are now, I read about them quite a bit, and thought: “oh, I’ll just plant more so they have some and I’ll get some”. There were some suggestions on the internet that hinted to that, and I liked the idea of living in harmony with nature.

The first year was bad, I only got very little of what I planted, the next year, I planted a lot more, and got even less. I was doing farmers market, CSA, and for our own consumption.

I tried traps, the kind that are small, all metal and you bury them in the tunnels and cover with dirt, they are so small, gophers ran away with them. I tried pushing CO2 down the tunnels, they say it’s heavier than air, it sinks down the tunnel and they suffocate. I considered dogs, ferrets, and other things that were not suitable for my situation.

I paid $1500 for a contraption that injects oxygen and propane down the tunnels and then ignites it, supposedly exploding and collapsing the tunnels, killing the gophers in the process. Have to admit, never actually had the guts to try it, after I heard from a neighboor that used one in the summer, and set the whole field on fire, having to call the firefighters to put it out.

It got so bad, I lost most of the crops I invested hundreds of dollars in seeds for and countless of hours of work. I gave up the garden alltogether for a couple years. They, the gophers, seemed to have won.

But I really wanted to grow vegetables, if not for market at least for us. So, I started again, with a small area in my big garden, and I figured it will be my experiment. Three years later, I am no longer afraid of them.

I am using traps, the kind that you place in tunnels, but you don’t have to bury the whole thing, there is a metal part that you can see, no need to unearth the whole thing to see if they are tripped.

I do need to stay on top of it tho. When the season starts, I set them and check them every morning, and move the traps if nothing happened in two days or so.

When I do get gophers in traps, I give them to Lily, one of my dogs, she likes to eat them, so that counts as a stacking function for me.

Here are some pictures, and I’d be happy to give more details, if you or anyone wants to give this method a try.

Ps: I’ve never considered poisons. They are what the word says. 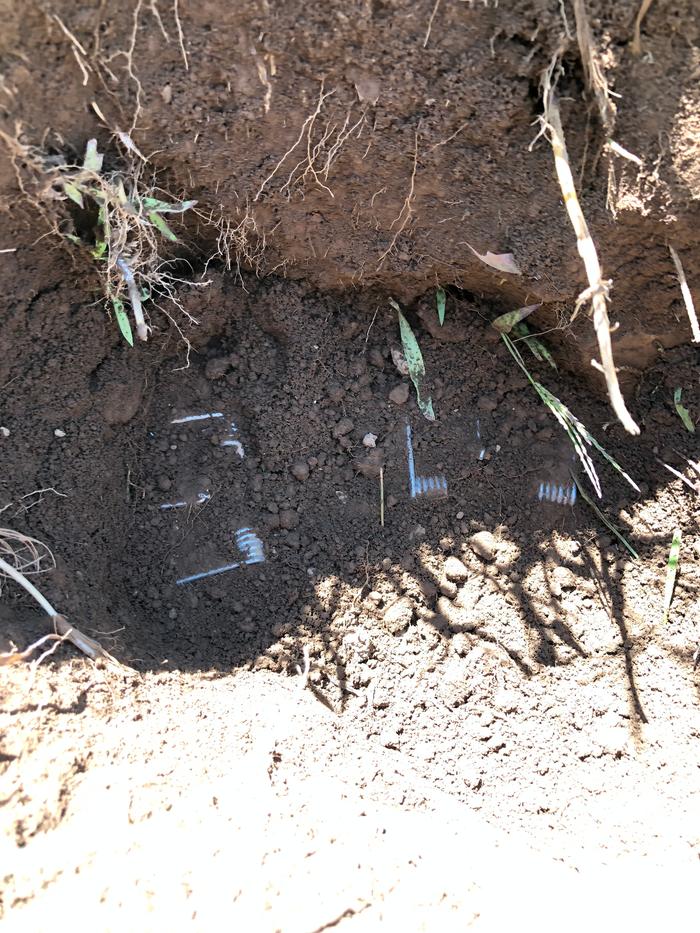 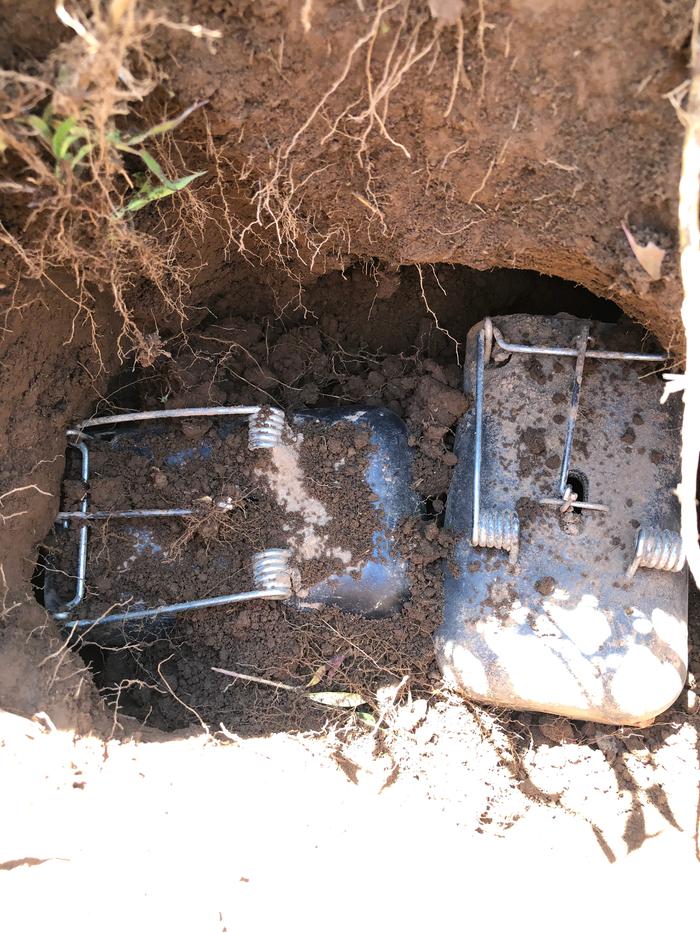 I used to struggle with moles.  They could wreck my lawn virtually overnight.  I was at the point where I was willing to do pretty much anything to get rid of them.

One day I walked into the garden center asked if they had anything for moles and they recommended a product (it came in both a spray-on oil or a granular pellet) that when spread on the ground was utterly repulsive to the moles but had no perceptible odor to humans.

At first I had to spread it pretty much all over my yard so as to make my yard unappetizing to the moles.  After they got out, I just occasionally spread the stuff all around the perimeter of the yard, alongside the driveway and around the house.  The moles just stopped being a problem and I am all but certain the product was OMRI listed.  If memory serves, it was called Molego, and is good for just about any burrowing critter.  It is not a poison or toxic Gick, it just smells bad to digging critters.

Permaculture. It’s a journey, not an event.

Roy Long
Posts: 71
Location: North Idaho
29
posted 1 day ago
A friend of mine invented a gopher trap about 30 years ago that used a .22 bullet, I cannot find that on the internet anymore, but I did find the "Molecat" "Bunker buster"...

I uses a .22 caliber blank round to kill the critter with a concussive blast.  These are pretty effective against a variety of tunneling critters.

Myself I just try to keep my barn cat population up around 20 or so, they all have babies in the spring and go out hunting all of the voles, moles and gophers in my hay fields to feed to the babies..  then they tend to get eaten by the hawks, owls, eagles and coyotes which keeps the cat population in check.  I have to bring in a cat or two now and then to help replenish the population numbers when they start to get down to 12 or so cats.  I feed them dog food and garbage materials from my slaughtering and meat processing to keep them alive and kicking.  There are few more effective predators than cats for keeping things like this under control.  Not something you can just do quickly though, these cats have been hunting and living semi wild existences for about 15 generations now on our farms.

If you are interested in the .22 caliber device here is a link to a short video showing how it works...

posted 1 day ago
Thanks everyone!

Yes, they are Richardson Ground Squirrels to be precise.

posted 1 day ago
Oh, my bad. My post was specifically for pocket gophers.

I hope you find a way to deal with them.

There are no pleasant solutions, I'm afraid.

On a larger scale, farmers may pump propane or anhydrous ammonia down the hole -- especially early in spring, before the young come out. This displaces the oxygen in the burrow. Not nice, but I don't see any long-term harm to the land.

Consider also that squirrel is a traditional bush food. Apparently there are some scent glands you need to remove to avoid tainting the meat. And of course, protect yourself from fleas. But from a permie systems perspective, they could be considered an edible part of the landscape ...

Edit: And apparently some people keep them as pets. Perhaps there's a lucrative side hustle disguised as a problem?
Douglas Alpenstock
Posts: 11
Location: Canadian Prairies - Zone 3b
2
posted 21 hours ago
On further research, it seems the propane and anhydrous ammonia experiments have not proven to be particularly effective, and they are of course hazardous. So scratch those.
John F Dean
Posts: 416
Location: Southern Illinois
53
I like...

posted 19 hours ago
My vote goes to a small herd of Rat Terriers.  We never had a gopher problem until one of my neighbors moved taking their Rat Terriers with them. My Border Collie  and Australian Shepherd  do a reasonable job now.