We found 20 acres raw land, how to control ticks while we plan?

posted 1 year ago
Sorry for not properly reading the OP before my first reply. When safe, legal and well considered, I agree with the fire idea. Another thing to do is clear all vegetation on paths and other places where you often walk.

While there are no accurately recorded tick diseases where I get most of my ticks, there are lots of nasty diseases they can cause. If you fear lime disease, look up mammalian meat allergy, seems like a fate worse than death. The majority of the ticks I get are from walking in dense vegetation (which is obvious) and from artificial grass that is barely an inch high.
J Brooks
Posts: 5
posted 1 year ago
If it can be done safely, burning periodically is a great tool to knock down tick populations and encourage healthy native-plant growth in wild areas.  Many biomes in the continental US are fire adapted, so native flowers and subterranean critters actually need occasional fires to be healthy.  How often to plan a burn?  Depends on the area, overlying fuel, vegetation type, local climate.... this Wikipedia article has a map showing historical burn frequency in different areas of the US:  https://en.wikipedia.org/wiki/Native_American_use_of_fire_in_ecosystems .  Also note from the same webpage that fire helps by "Decreasing tick and biting insect populations by destroying overwintering instars and eggs."

I knew of someone in the midwest who burned her pasture every year, but that was really hard on the land and just plain annoying to her neighbors.  For her location, burning every 3-6 years would have been better, or she could have done smaller annual burns and rotated through her acreage.  A managed nature reserve in Missouri does this-- they burn a small section each year, gradually rotating through the whole place.  That burn plan is ideal because it's flexible (some years won't be good burn years and can be skipped), it's consistent, not too draconian, not so smoky, and it's easier to keep fires under control.

There are businesses who will run managed burns- i.e. pull permits and have safety equipment and insurance-- but i don't know what they charge.

In my experience, ticks travel on deer, so if I'm following a deer trail in the woods I'll swerve to avoid brushing against deer-height (knee to waist high) vegetation.   And I avoid sitting in areas where deer sleep.   Maybe if you could create deer-free zones, that would reduce the ticks in spots?
John Paulding
Posts: 89
Location: Missouri Ozarks
14
I like...

John Paulding wrote:
The first summer we spent here, every evening, we looked like a family of monkeys pulling bugs off of each other, except that we didn't eat the bugs. We decided that's no way to live.

Good lord! Were you walking through tall grass and brush all day? If the grass is short ticks shouldn't be that bad.

No grass. This was undeveloped forest in the Ozarks with a logging road as access. We rented a "primitive campsite" for $495/yr, one acre of a 300+ acre property. Just a enough room for a camper trailer in the forest, miles from the grid, no physical addresses or 911 service there. It was some place cheap to live while we looked for property to buy which took two years. We have an address and 911 now but it takes them 40 minutes to get out here, another hour to a Hospital or 40 minutes to an air lift pad. Civilization comparatively speaking.

Chris Wang wrote: If you fear lime disease, look up mammalian meat allergy, seems like a fate worse than death.

I actually have the alpha-gal meat alllergy but in a pretty mild way. I had one bad reaction to ham from a home raised pig. Other white meat my ass. Probably a heritage breed as opposed to industrial pig. A ribeye will get me and I love ribeyes. I can eat about 2 oz of something like that or the cheap, fatty ground beef. I generally just get the hives if I eat too much. I had built up quite an immunity or the allergy just dissipates over time(they don't know which) but then a lonestar tick bite brought it back. I was up to 55-6oz of yumminess dammit. I originally got it in FL and we had a hell of a time trying to figure out why I was waking up at 2am with the hives. Finally narrowed it down to ribeye night. It's the only delayed food allergy there is as most reactions, like with peanuts, happen within minutes. Several years ago, two doctors from a university in Virginia, USA discovered it and at the same time, two doctors in Australia discovered it. I have no problem with lean meat and we plan on getting some meat goats which are very lean and not something we can buy at the store. Lean beef has no flavor imho. We eat lots of chicken, lean cuts of store bought pork and I'll have some soup or beans and rice sometimes while the rest of the family eats baby back ribs that I smoke.(snif snif, tear) I can eat a couple and I have an epipen here just in case. I'm lucky though. Evidently there's people who will go into anaphylactic shock if they eat a piece of fish or chicken that gets cooked on the same grill as a piece of mammalian meat was. Seed ticks don't seem to carry it and with the bigger dog/deer/lonestar ticks, at least you can feel them crawling on you.

Any work I have to do in the woods, I do it in Winter or early Spring when the little bastards aren't in season. When they show up in the Spring, I do my burn and stay out of the woods. I need to get some more chickens too.

When we moved to the Ozarks, there was a map showing all the known aplha-gal allergy cases and this area was just outside the affected zone but the zone has expanded. Sort of expected that though.

Lime disease is mostly in the N.E. part of the country and around the Great Lakes region so we don't have to worry about it too much here in the midwest USA. I see one dot in Missouri but the local news hypes it up like it's a thing here. 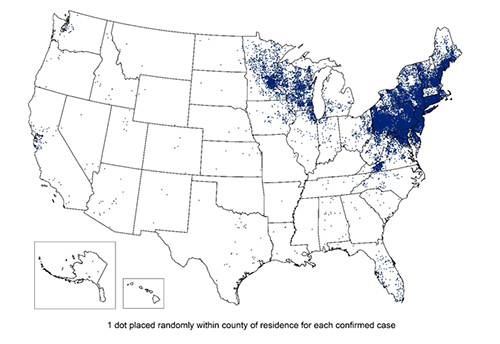 posted 1 year ago
I'm over in Western OK near the National Grasslands, prairie country. I've got under-grazed prairie covered in little bluestem grass. This bunch grass is about knee-high and years if not decades have gone by since much of it was grazed as the tenant understocks and uses continuous grazing. Some of the land is overgrazed - near water and shady areas. The national grassland does controlled burns but my neighbors don't seem to though one neighbor did have 160 acres burn this summer before the VFD got it put out. 4000 acres a bit north of me burned due to a careless neighbor and the manager of that property was glad of it and said that controlled burns don't get as hot as wildfires and so don't have the same effect. 250,000 acres east of me burned in wildfires last spring, I will scoot over there and see what it looks like now. The big problem there was that Eastern Red Cedar had covered much of the land. It comes up out of the gullies and spreads over the prairie. Cedar is another reason I will consider burning, otherwise, I have 200? cedar trees (6-8" trunk, up to 15' high) to cut down. I probably won't burn this spring as I want time to study the situation and want to choose the best time for the birds and critters, and of course, need to not be in a drought. I really like the idea of knocking back the chiggers as I am super allergic and won't go wading out in that tall grass in chigger season without this remediation - just being honest here. We are where we are, none of us perfectly eco-enlightened but working our way toward our ideals. As some say "Best is the enemy of good."

J Brooks
Posts: 5
posted 1 year ago
Re: fire.... I saw this yesterday, thought others might be interested:  https://www.youtube.com/watch?v=NerIx8tecHw

To avoid tree loss during burns (recurrent wildfires in this case), the ranch owner removed low tree branches that act as scaffolding for flames.   This might work in drier areas with low, bunching grasses-- probably not for prairies or forests, but they're wetter anyhow and less likely to have tree death from fire.
Rufus Laggren
pollinator
Posts: 1039
Location: Chicago/San Francisco
147
posted 1 year ago
Dan

I think to some extent I tend toward your view of fire. It's a truly major reboot for the area affected. I don't think there are any places on earth that experience fire over the same area w/in 5 years and probably 20 would be more like it. Well, wild areas, that is.

However. As William pointed out very completely, we'd be trying to negate 5000 years of living and killing each other (and developing methods to do each faster) if we tried to rule out active management of our environment. Looks like we're programmed that way and so best make lemonade. So that's kinda what I'm wondering. Has this tool been explored with our vaunted western science? Do we have any substantial records of how past people used it over long periods of time?

I believe there's been a certain amount of study of forest fires in the last 40 years. There seems to be a general consensus (unless you make money the other way, like building and selling new homes at the forest edge) that forests need to burn "regularly". But I don't recall details.

posted 2 months ago
I have had good success with Cedarcide, which is a cedar oil from Texas.  I bought it to deal with wool moths (turn a banker box into a cedar trunk, sort of!) and also brought it along almost a dozen years ago when we took the kids to Disney World in Florida.  Bedbugs in hotels were/are a thing.

When I visited family in Southern Illinois in August (deep deciduous forest, hot and humid - tick heaven) I sprayed my dog's feet and legs, and my feet and legs and of all the people that took a hike in the woods, we were the only ones who couldn't find any ticks afterwards.

Ticks don't drop down, they crawl up.  The most ticks I've ever had on me was after walking through waist high grass in the San Francisco Bay area, so obviously humidity isn't needed for ticks to be numerous.

Rufus Laggren wrote: Do we have any substantial records of how past people used it over long periods of time?


The book Sproutlands (Logan, 2019, https://www.amazon.com/Sprout-Lands-Tending-Endless-Trees-dp-0393609413/dp/0393609413 ) has a chapter, "Making Good Sticks", on the extensive use of fire by native Californians.  Through "fire coppicing", they burned patches every one to five years.  This created fresh green forage, created plenty of straight sucker shoots to harvest and use for baskets and fences and walls, cleared the land for easier movement, and killed oak moth larvae ensconced in felled acorns on the ground.  Presumably also burned ticks and other problems.

Before reading this book, I thought pollarding and coppicing maimed and killed trees.  I still don't like the look, but now I realize these techniques are essential skills, and our world and civilization were created by them.  Coppicing and pollarding were used extensively from neolithic times up until recently.  Actually, the neolithic age, the stone age, is a misnomer: it was the age of wood, but the wood rotted away, leaving the stone tools we found.  Want to have a huge supply of uniformly sized poles and sticks, just right for walls, fences, baskets, kiln fuel, etc.?  Then you want to learn coppicing and pollarding.  These techniques reliably generate mountains of clean, smooth, ready-to-use material.  Longer-term pollarding created building timbers and ship frames.