how to take rosemary cuttings that don't die?

posted 1 week ago
How do I grow rosemary from cuttings?  Is it possible?  Mine always die.

posted 1 week ago
the only place i’ve seen where it worked was a pretty tightly controlled greenhouse situation. semi-hardwood cuttings in late winter, stuck in rooting hormone (but hopefully a strong willow tea would work as well?), misted with water as frequently as every couple hours, depending on sky conditions. success rate was around 75%.

i’ve tried to approximate the conditions on my own since then a few times without success.
Dee Kempson
Posts: 34
5
posted 1 week ago
I have found with any of the woody herbs like rosemary, lavender , sage .... 2 things contribute to a successful cutting strike. One is to use a moon calender and pick the right time to strike a cutting... " During the Full Moon and Last Quarter phases the Moon wanes or decreases in light and sap flow in plants is more concentrated in the root area... Because Full Moon phase favours root growth, this is also an excellent phase for taking cuttings, or for aerial layering, because root growth must form to support new foliage growth. This is also the best phase for dividing plants for the same reason. .."   and two, when getting cuttings... pull  a small "branching" away and down, or away and back, from the main stem or branch you are taking a cutting from, so that you get a "heel and toe" at the end of the branching/cutting,  and sow "heel and toe" end down in your medium...alternatively put them in a jar / glass of water and wait till roots grow then plant... apparently all the hormones and whatever required for roots to form is in this little section.... It almost looks like a lady's slipper... I also prune / tip the top of the "cutting" to encourage branching right from the get go...  Smaller cuttings are easier to strike than large ones...

further beneficial info re the "right time" to take cuttings...

Fertile and Barren Days
These are a further refinement that has been added to moon planting principles through the ages. Traditional moon planting divides the zodiacal belt into 12 equal 30° segments, each named after the constellation closest to it. Although scientists have tended the disregard this part of moon planting, I think it is related to the subtle changes in the Earth’s electro-magnetic field because seeds and plants can only absorb the minerals they need for growth as water-soluble, electrically charged ions, and each 30° segment has been given a ‘positive’ or ‘negative’ rating, and these ratings vary from those used in astrology.

Fertile days, i.e. when the Moon is in the fertile (negative) signs of Cancer, Scorpio and Pisces, or the semi-fertile days of Taurus, Libra and Capricorn, are considered to be of extra help for sowing, grafting, taking cuttings, pruning to encourage growth and planting bare-rooted perennials.

Barren days, i.e. when the Moon is in the barren (positive) signs of Aries, Leo or Sagittarius, or the semi-barren signs Gemini, Virgo or Aquarius are considered to be of extra help for weeding or harvesting crops for storage. If digging is unavoidable outside Last Quarter phase, it is best to do it on barren days.

Dee Kempson
Posts: 34
5
posted 1 week ago
to add to that ...one doesn't need a hormone rooting powder with this method...and... dipping the "heel and toe" ends into honey for half an hour or more before putting into a medium does the same job as a rooting powder... or for any cuttings actually...
Jay Angler
gardener

posted 1 week ago
Have you considered aerial rooting for rosemary? A friend did that with her plant and managed two good plants out of 3 tries. She was *really* reliable about keeping the rooting medium damp.

Dee Kempson
Posts: 34
5
posted 1 week ago
I haven't tried that because the "heel and Toe" cuttings were successful whether planted into a medium, or by simply being put in a glass of water till roots grew... then potted up/ or transplanted... I have a really old "mother" bush of rosemary which expresses "aerial roots" at the lower part of the trunk ...but they are dry and stringy... can see how that would work as well tho...
Hugo Morvan
gardener

posted 1 week ago
If i read all the things the commenters are having to do to obtain rosemary cuttings that grow i wonder how i’ve been so lucky.
I just stick pencil width sized sticks in the soil in autumn and they will grow well mostly , when winters are soft and if spring has enough rain.
You’ve probably tried that already..
It’s not the first time people from US tell me they have difficulty growing rosemary from cuttings. Maybe some odd difficult to clone variety is dominant over there?

Hugo Morvan wrote:It’s not the first time people from US tell me they have difficulty growing rosemary from cuttings. Maybe some odd difficult to clone variety is dominant over there?

Maybe - but you've got me thinking. It may simply be climate - your France winters may be perfect for Rosemary cuttings and North America may have different wind/humidity/temperatures that simply aren't as plant-friendly.
But, what if it's something to do with the soil biology? Has anyone tried rooting - aerial or otherwise - using some of the soil from the base of a successful Rosemary plant? Even if Hugon doesn't do so, he may not *need* to do so, if the "we like Rosemary" soil microbes are endemic?

I have heard of something similar with a plant normally prolific in the southern areas of the US not surviving when grown from seed in Alaska. When someone brought an established plant in its own dirt, it did fine and dirt from near that tree added to the soil elsewhere, allowed the tree-from-seed plants to survive.  The problem with hearing such things, is that one never knows for sure if it is true or embellished.

posted 1 week ago
Since rosemary likes to propagate its self, is it possible to take a limb that propagated then clip it off and dig up the new plant?

I am not interested in any new plants so I have not tried doing this.

Every so often I try to cut those limbs, pull them up and throw them in with my mulch.

posted 1 week ago
True what Jay Angler says, the other way around, i’ve heard the same goes for Sequoia brought to Europe. They grew marginally until someone burried soil from usa Sequoia tree at its base. Turned out it was a specific mycorrizal fungi that teamed up with the roots of the Sequoia.
Same for blueberries that come from chemical growingstations. They grow great until the chemical fertilizer is out of the soil, but adding soil to their base from wild flourishing blueberries is said to restore the plant to a natural grow rythm.
Climate is mild here with the influence of the oceancurrents. Last year saw some heavy frost which for American standards is laughable and many cuttings died because of it. They’re Mediterranean in origin.

posted 1 week ago
I have four large Rosemary plants and my cutting rate is about 50/50.
I take a cut, remove the lower needles, soak in water that I change out everyday until it grows white roots. I plant them in soil and wait and see if it lives then plant outside or give away to friends.
Hugo Morvan
gardener 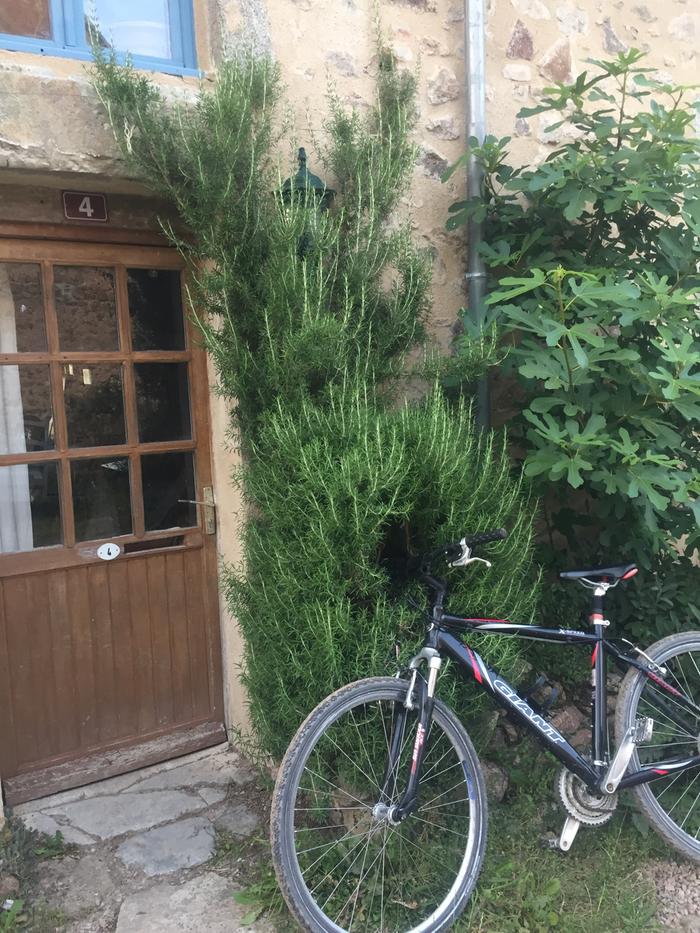 posted 1 week ago
My best propagation method is to take my overwintered plant (that I keep indoors, they don't survive OK winters at my spot) and lay down the lower branches when I transplant into the larger summer pot.  Bury all but the tips in soil and then just treat the pot normally.  By fall all those laid-down branches have rooted and can be snipped and transplanted into their own pots with a tennis-ball-sized root ball.

S Ydok
Posts: 42
3
posted 1 week ago
I didn't know rosemary was hard to propagate as when I actually do mine they have lived.

I've always taken a piece that is woody, yet has new green tips. Snip, then "skin" an inch or 2, dip that area in rooting hormone. Then stick in moist potting soil. 1 Spritz of water every day at the "ground" level. After a week I pull it up a hairsbreadth only once.

Most important part of this is that it can't get or be dry. And for whatever reasons, by the kitchen sink seems to be the best area for me or sometimes a shady window that gets a bit of morning sun.

Susan Boyce wrote:I have four large Rosemary plants and my cutting rate is about 50/50.
I take a cut, remove the lower needles, soak in water that I change out everyday until it grows white roots. I plant them in soil and wait and see if it lives then plant outside or give away to friends.

Exactly this worked for me last month. I've got 4 little rooted cuttings now in containers ready to give away. I used fresh growth, cuttings about 4 to 6 inches long (10-15 cm). Removed lower leaves, kept in water in bright shade indoors. Changed out the water every few days. About half them developed roots after a couple of weeks, and 4 of the 5 I then put in soil seem to have made it.