Can you wash off the chemicals on store bought potatoes so they would grow?

Samuel Palmer
Posts: 39
Location: Murrieta, CA, Zone 9b/10a
2
posted 10 months ago
Many articles discourage the use of non organic, store bought potatoes because of chemical treatments they use to prevent sprouting. I wonder if I could wash the potatoes under very warm water for a minute or two to get the chemicals off.
S Bengi
pollinator
Posts: 3113
Location: Massachusetts, Zone:6/7, AHS:4, Rainfall:48in even Soil:SandyLoam pH6 Flat
320
I like...

posted 10 months ago
Mines have grown with no washing.  It helps if they have lots of eyes and they are a bit old and turning green.

Wilson et al. (1981) showed that washing the tubers under running water reduced CIPC concentration from 45 to 40 mg L−1. By applying a more rigorous washing procedure, 88 % of CIPC was removed (level changed from 1.6 to 0.2 mg per kg of potatoes) from potatoes which were earlier treated with an emulsified solution of CIPC (0.1 %)

So probably the answer is no, as I think really vigorous washing would probably damage the eyes!

posted 9 months ago
I've never had store bought potatoes not grow.  Often times, they start growing in the cupboard before I can eat them.

But I usually buy potatoes grown in the same country, so they don't need treatment to go through customs.

I suspect organic potatoes wouldn't have fancy chemicals.  Probably better for you too.

posted 9 months ago
Although I've never planted any store bought, my potatoes always start sprouting after a while in the dark cupboard where they're kept. 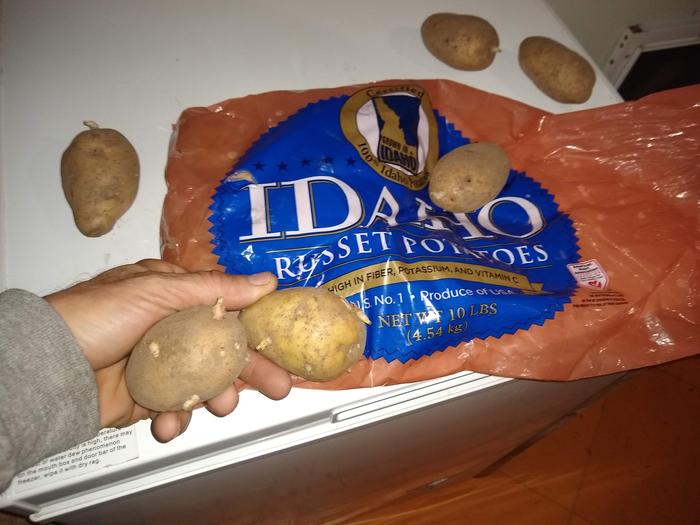 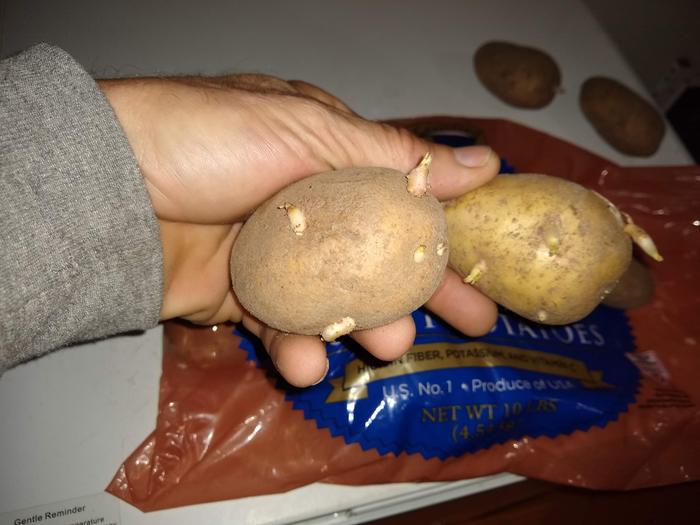 posted 9 months ago
I can't recall which book at the moment, but probably a Michael Pollan title, he devotes a full chapter to the commercial production of potatoes.  The litany of chemical treatments that go on those fields is appalling.  The farmers themselves won't eat the crop that they produce.

ETA:  It was The Botany of Desire.

posted 9 months ago
First if all, not all commercial potatoes are treated to prevent sprouting. But some indeed are. There is no way for you to tell the difference, since the treatment is not required to be revealed to the public. Organic labeled potatoes are not allowed by law to be treated, but keep in mind that cheating is now rampant in the industry.

Among treated potatoes, you will see considerable variation in sprouting. Potatoes that received a goodly treatment, sprouting will be significantly suppressed to the point that the eyes don't develop greening. The less the potato was exposed, the more sprouting will occur. Some will produce a mass of stunted knobby sprouting tissue but nothing above the soil surface. Some will produce green shoots above the soil level, but they stay small and stunted. Others will produce an almost normal looking plant, but instead of making normal tubers, it makes knobby masses. And those that received very low exposure to the chemical will sprout almost normally but not produce a large crop of spuds. Keep in mind that the commercial potatoes are treated in large bulk masses, so some tubers get exposed to the chemical more so than others simply because it's impossible to make treatment even with such large bulks.

As I see it, a more serious problem with using supermarket potatoes for planting is diseases, primarily blight. While the seed producing companies constantly survey their fields and remove any "off" plants that may be diseased, commercial production farms do not. Thus blight may exist in their fields and nothing is done about it. The potatoes are harvested, sold, sent to stores. They are safe to eat, but may carry blight to a gardener's land if used for planting. I personally have seen cases where this has happened, where disease-free gardens ended up contaminated with blight. So this is something to keep in mind.

posted 9 months ago
I wonder if it's a USA thing?

In Canada, we have quarantine zones.  If you are known to have blight, nematodes, or other stuff, you can grow potatoes, but you cannot export it out of the zone.  There's a great deal of protection so if someone tosses the old potatoes in their compost or urban compost collection (as is the law in many places), the nasty stuff won't make it into the food chain.

That's why it's so strict with possible criminal charges, to export potatoes off a quarantine zone.

Since exported potatoes are tested, this extra expense of applying chemicals doesn't make much economic sense.

posted 9 months ago
Since blight is wind born if it's in your area you will get it. this year we grew new certified potatoes in a space they have not been grown in at least 30 years. (nor had they been grown within half a mile in the last 5) we got blight at the same time as normal and just as hard. There is no way to avoid blight.

Posts: 5376
Location: Cache Valley, zone 4b, Irrigated, 9" rain in badlands.
2020
posted 9 months ago
Ethanol  can trigger dormant potatoes to sprout. Therefore, you might try soaking them in beer after washing with water.

posted 9 months ago
I grow store bought, organic potatoes all the time.  But, I wouldnt bother with the non-organic as it is too much of a risk, go to the trouble of the garden space to not have a yield, since many are sprayed.  More often though I start with seed potatoes and save my own from year to year.  I have some seed potatoes that were originally store bought organic, the russets, they are the variety Norkotah ( which I likely misspelled).  The reason I had planted some of those a few years ago is that my planting season is early than other areas and I had not planned ahead and ordered in the fall, and also since they were so far gone in storage, even I thought they should just be planted !  Those store bought Norkotah were organially grown and I bought them from Azure Standard ( they have a web site and truck delivery to alot of the continental USA ) they have a very good reputation on their sourcing, so I could trust that they actually were organic.  Some stuff labelled organic, yes, maybe some places "cheat.  Another source for you could be yoru local farmers market, so regular potatoes locally grown to you, likely these are not treated, so ask at the farmers market.

I just mail ordered a new variety to be planted here, soon, to add to the ones I saved from last year, and these I bought recently from Peaceful Valley Farm ( GrowOrganic.com) and since they are also in CA, they could send to my area now, when I need them.  It looks like you, the original poster, are also in California, so go to their website.  They are shipping within CA right now, if you cant figure it out, call them.  They also have fair pricing on seed potatoes, compared to many venders.

Devin Lavign
pollinator
Posts: 1047
Location: Pac Northwest, east of the Cascades
283
I like...

posted 9 months ago
Most store bought potatoes seem to sprout without a wash or treatment. Or you can go the route of organic ones. If the ones you have aren't spouting then please stop buying that brand immediately. It is dangerous and covered in toxic gick.

Even if seed potatoes seem expensive, compared to you leftovers, they are a one time investment. Unless you growing to seed to discover genetics that have been lost, you are buying a known type that will clone true again and again. Kind of like apples.

posted 9 months ago
You can force potatos to sprout by putting them in a box with a slice of apple. Redhawk told me about this and it allowed me to use my spring crop for a fall planting.

wayne fajkus wrote:You can force potatos to sprout by putting them in a box with a slice of apple. Redhawk told me about this and it allowed me to use my spring crop for a fall planting.


Could you clarify please? So you put them in a box with a slice of apple that will rot or am i not keeping it in there for long?
Samuel Palmer
Posts: 39
Location: Murrieta, CA, Zone 9b/10a
2
posted 9 months ago

Joseph Lofthouse wrote:Ethanol  can trigger dormant potatoes to sprout. Therefore, you might try soaking them in beer after washing with water.

What percentage? Does it need to something strong or can i just use a diluted wine mixture?
Joseph Lofthouse
steward

Joseph Lofthouse wrote:Ethanol  can trigger dormant potatoes to sprout. Therefore, you might try soaking them in beer after washing with water.

What percentage? Does it need to something strong or can i just use a diluted wine mixture?

William Whitson
Posts: 99
Location: Washington coast
30
posted 9 months ago
Put tubers in a plastic bag with a splash of 70% ethyl alcohol for 48 hours and then wait.  It breaks dormancy on some, but not others.  The sprout inhibitors usually aren't very effective anyway.  Patience will almost always result in sprouts.

That said, if you are planning to grow potatoes long term, don't grow grocery store potatoes.  There are many common potato pathogens but most of them will never trouble you if you don't introduce them to your garden.  Some are nearly impossible to get rid of once you do.
wayne fajkus
gardener

wayne fajkus wrote:You can force potatos to sprout by putting them in a box with a slice of apple. Redhawk told me about this and it allowed me to use my spring crop for a fall planting.


Could you clarify please? So you put them in a box with a slice of apple that will rot or am i not keeping it in there for long?

I think it does the same as the other recommendations. The apple rots, it produces ethylene gas. That's my understanding.  Someone had said a banana would work also.

When i did it, i had 2 boxes. The one with the apple sprouted, the one without it did not. It was pretty clear to me that it worked.

John Pendrey
Posts: 1
posted 4 months ago
My ware potatoes didn’t sprout by end of June 2020. I dug a few up and though firm no sprouts.