posted 5 years ago
I can think of one big hole in the downhill wall for sure. Above the window is a 1 inch wide vent, which Ernie suggested I install to prevent pressure changes during a storm from breaking the windows. It is also designed to be used with a storm window. The storm window would have a vent at the bottom, and air that is heated between the storm window and house window would be allowed to escape into the house via the vent at the top of the house window. Heat inside the house would not be able to escape as hot air would not flow down between the two windows, this requires a storm window to be in place in order to work. Either a storm window should be built and installed for winter, or the air vent can be stuffed with wool.

Now, my thoughts on the current experiment: I don't think 10 days is near enough time, when what is needed is a conduction of heat from the air into the mass. The air has very little mass, and therfore can hold very little heat, even if it is 85 degrees and uncomfortable. So, say the air inside the wofati is capable of holding 1 unit of heat. The mass underneath the umbrella can hold 1000 units of heat, and is currently holding only 100, i.e. it's very cold. So even if the air inside the wofati is unbearably hot, you are still only going to be able to transfer at most 1 unit of heat, per day, into a mass that can hold 1000. After 10 days of blasting the heat, you may have only rasued the heat stored in the mass from 100 units to 110, still very cold. What you need to transfer a lot of heat into the mass is a lot of time, i.e. a while summer season. 200 days of warm air, warmer than the mass temp that is, moving through the wofati would raise the heat in the mass from 100 to 300, getting warmer. By the next spring, the mass may have lost 100 units of heat, but will gain another 200 over the next summer, bringing the mass up to 400 units, now it's starting to feel more comfortable all year round. These numbers are totally arbitrary, but I use them to illustrate the point that the transfer of heat from the air into a solid mass is a very slow process. Right now you have an incredibly massive heat sink surrounding the house, and it is very cold. I think that you are loosing far more heat into that big chunk of cold, than you are through any small holes in the insulated walls. I would wait until next summer has had its chance to charge the mass with heat before putting more energy/time/money into altering the umbrella. The design could be perfectly fine as is, it just takes a couple years to charge the mass.

Biodegradable Bar Oil for my chainsaw. I'm gonna need a lot of this for milling lumber with my chainsaw mill.

Darn Tough Socks that come with an unconditional lifetime warrantee! I go through socks like goats through a fence, these are supposed to last a lifetime or they send you a new pair! Size 12/XL please

nancy sutton
pollinator
Posts: 919
Location: Federal Way, WA - Western Washington (Zone 8 - temperate maritime)
73
4
posted 5 years ago
Well, I know it's an impurity, but just for the sake of 'before' and 'after' comparison to judge the effect of leakage around door frames, etc., you might seal them with wide masking or duct tape...easy peasy... temporarily, mind you, just to assess the effect of the air flow!

And those windows had made me cold just looking at them... really, put something on them, asap. Over here in 'contaminated land' I'm recycling bubble wrap on double paned windows - really cuts down on the incoming cold. It 'magically' sticks perfectly well if window is just lightly dampened.. stays there til easily removed (and reused.) Come to think of it, if any could be scrounged 'in town', it could also be a 'test' of the effectiveness of window 'insulation'... again, easy peasy ... no need to wait, and easily removed whenever the insulation blanket curtains are available :)

(I know all forms of plastic, et al, are nasty, but burning fossil fuels is also nasty, even in earth movers... we can't let the 'perfect be the enemy of the good'... all of the time, anyway. Or maybe 'we' can?)

posted 5 years ago
The hole in the downhill wall: 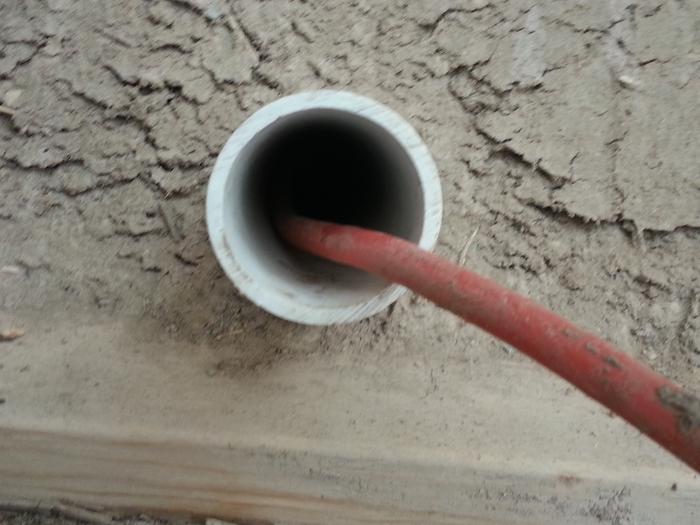 The gap at the door: 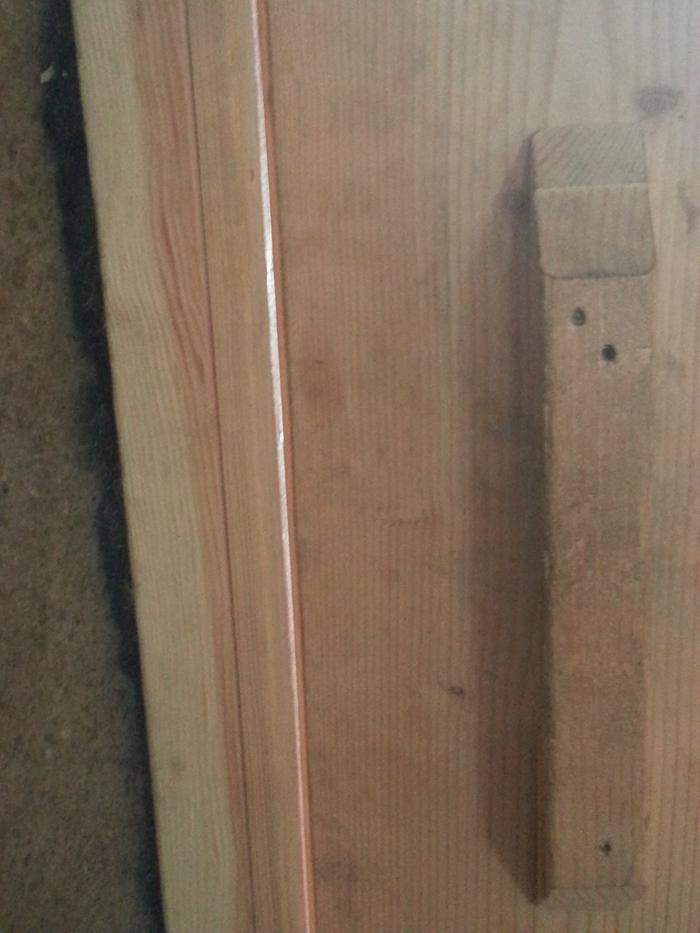 Cheap and fast bush kid solutions to these leaks:

1. Conduit fix: Wool. Stuff that conduit with wool. It can always be poked out later. Same with your rocket mass heater chimney when not in use. The wool could be stabilized (so that it doesn't fall down the chimney) by putting some in a plastic bag and stuffing that in the exhaust. then pack a bit of loose stuff around that to seal any gaps. Put a bucket over the chimney to protect the wool from moisture. Easy Peasy.

2.)Door seam fix: A strip of old wool carpet, non fuzzy side glued or screwed to a strap of wood. Screw the strap of wood with the carpet against the door to the door itself on the side of the door that it opens towards; have the strap of wood and carpet combo overlap the gap in the door seam so that it contacts the frame. The carpet seals against the door and frame, as a gasket, giving a much better seal and barrier than you have now (which is none). A strip of old wool blanket could also be used in place of the carpet. An old mountain bike tire's tube could be cut and used as a rubber gasket instead of the carpet or blanket.

A curtain rod with a blanket (a loop sewn in it to slide the rod through) to cover the door on the inside would be another quick and easy addition to further the insulating effect.

Also: Heating Strategy: I would personally put in a regular rocket mass heater or two and have the mass benches be directly against the walls you want to heat the most. You could put the second pass of the exhaust in the bench that is returning towards the riser and chimney closer to your wall than normal to facilitate more heat transfer directly to the wall. These could be temporary heaters (pebble style like in your office), that you take out later. Just get them built so that you can charge the walls with heat.

One thought I have about the WOFATI design that has been bugging my brain since I read this entire thread this evening (whew; what a marathon!): It seems that the way it is built, from what I can gather through all the photos of the present structural design and landscaping, the uphill side of this wofati is a potential frost catchment, particularly if someone was to build a similar structure on a big slope.

posted 5 years ago
pic from evan 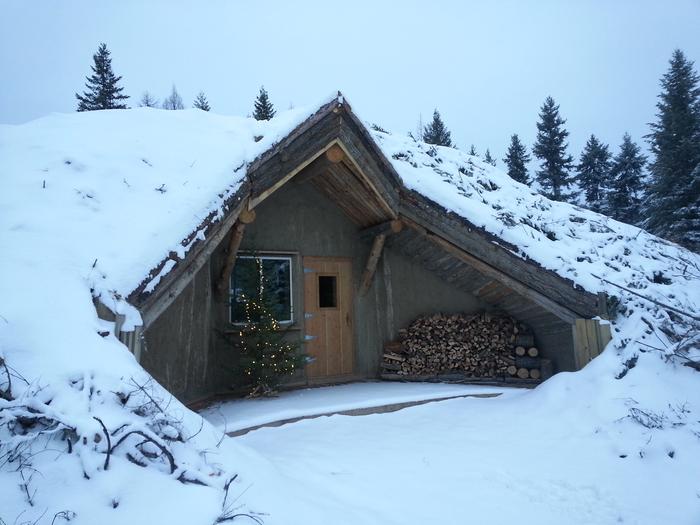 posted 5 years ago
That's beautiful. Way to go, one and all.
paul wheaton
steward

posted 5 years ago
another pic from evan: 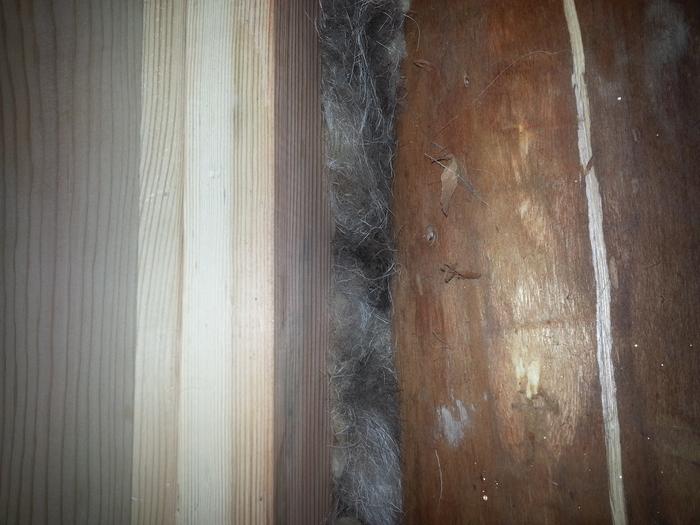 posted 5 years ago
Right on! Identifying and plugging air gaps in the shell is most important. Infrared cameras are getting cheap and can help find the less-than-obvious culprits.

It seems to me that warming the air to 80 or so once a day and then letting it cool down for the remainder of the day is more a test of R-value (assuming an air tight building) than thermal inertia. Perhaps a better, but more difficult test, of thermal inertia would be to keep it at a constant 80 degrees for 10 days or so, then put out the fire and see what happens.

A tight fitting damper in the stove flu will stop the chimney effect sucking the heat out of the building, and loss of heat via convection currents in the stove pipe. Insulated stove pipe from the damper upward, will prevent loss due to conduction through the pipe wall. I have heard of people installing dampers at roof height and using string or poles to control them.

I read that russian mass heaters with the exhaust gasses entering and exiting down and then through the bottom of the bells, create a natural thermal block to stop heat loss via chimney/pipe convection currents and eliminates the need for a damper. I'm not an expert on that, so I don't know if it really works or not.