The Bale-Press at Wheaton Labs

posted 6 years ago
When I visited Wheaton Labs, I took the opportunity to photograph the bale press. First, at Base Camp, and later in action at The Lab. 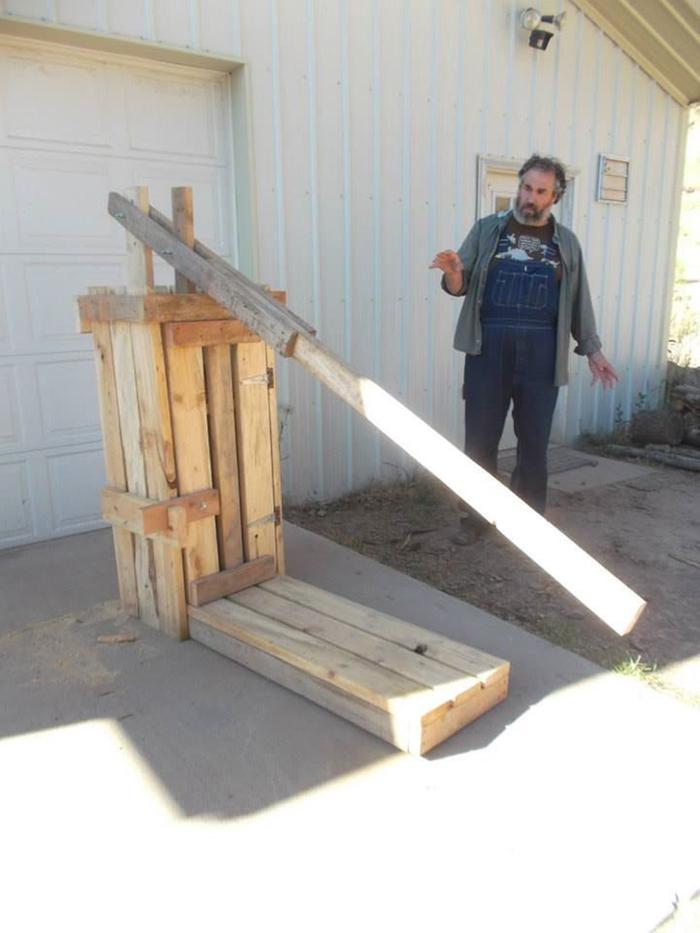 Paul opened up the door so I could see the inner workings of the beast. 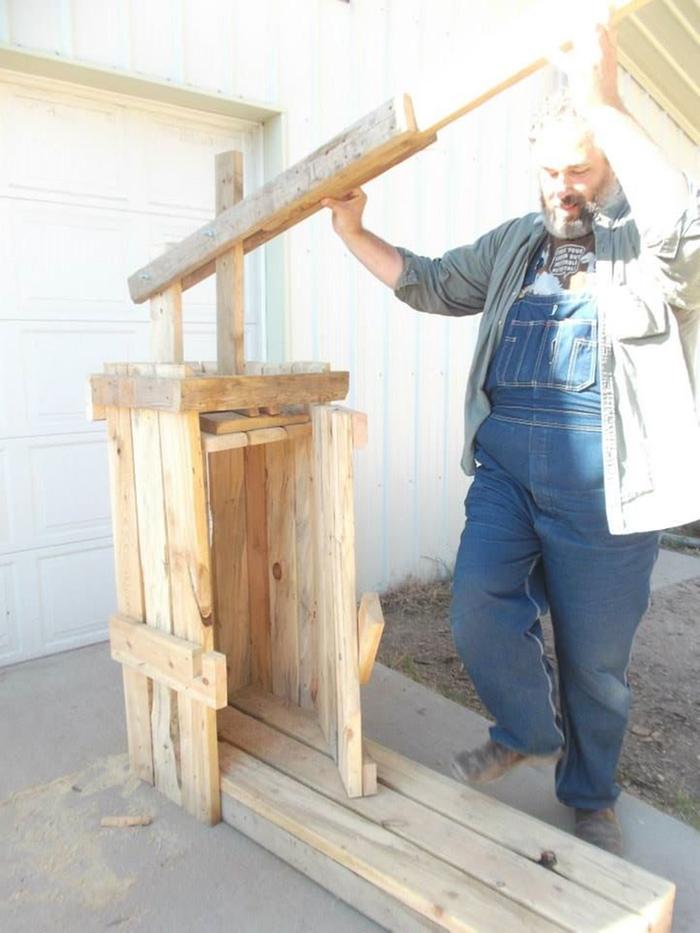 Here's a view of the business end of the press doing it's thang. 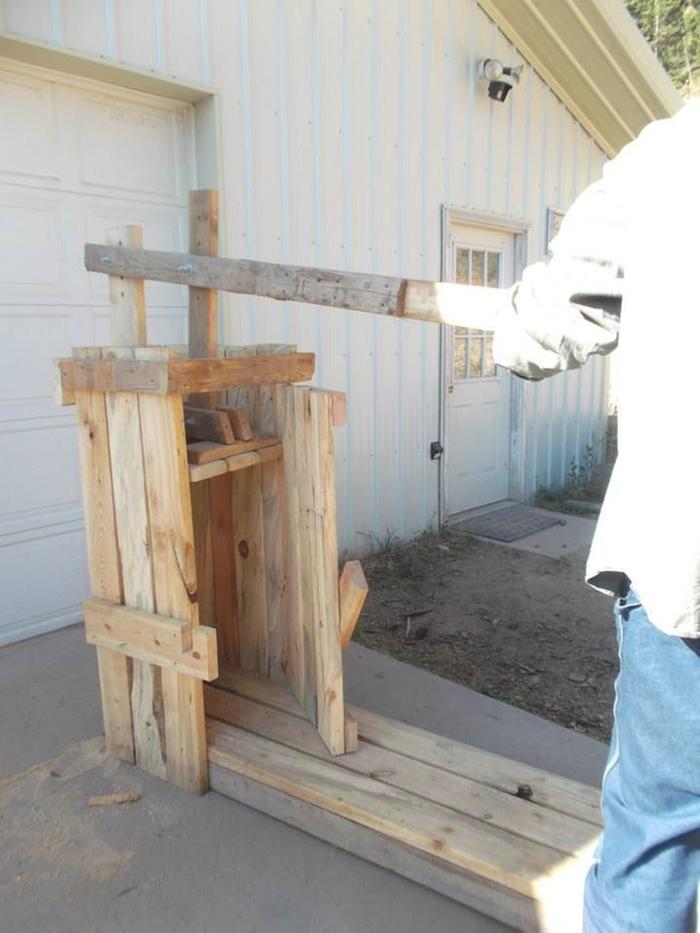 The slots in the press line up with where the strings on the bale go, so either you can put string onto loose hay to create a bale, or reach the strings on existing bales to tighten them. 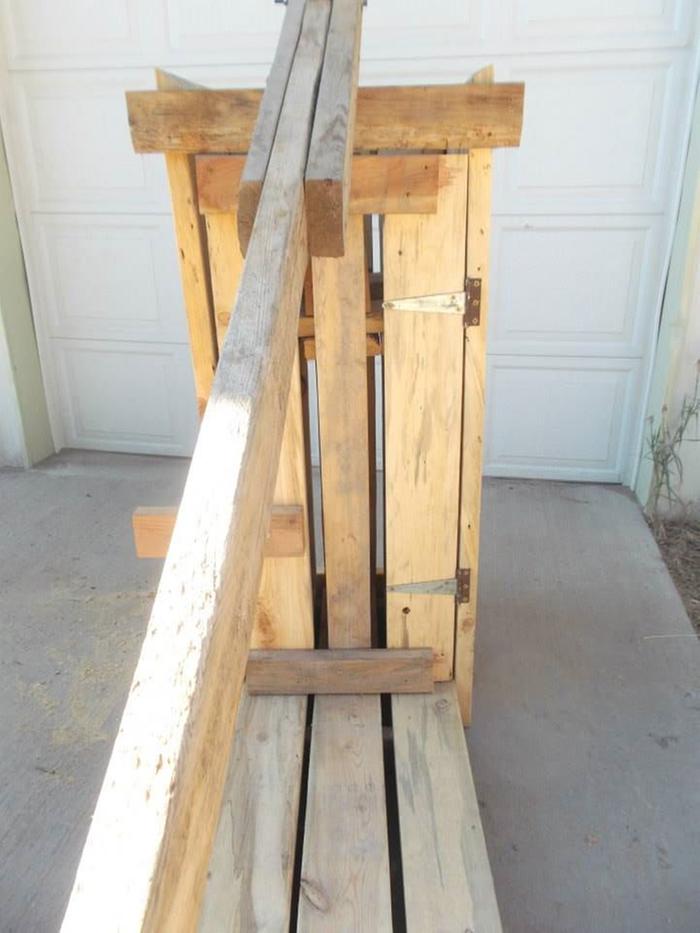 This bale is far too loose to build with, so it's a good candidate for testing the press. 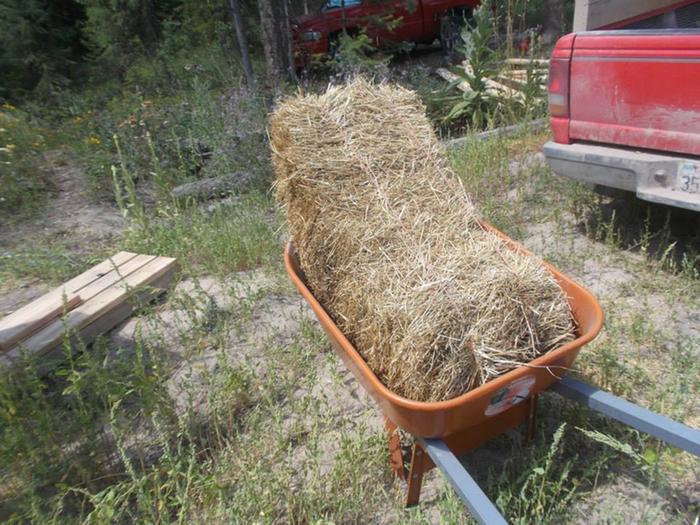 Jesse inserts the bale into the press... 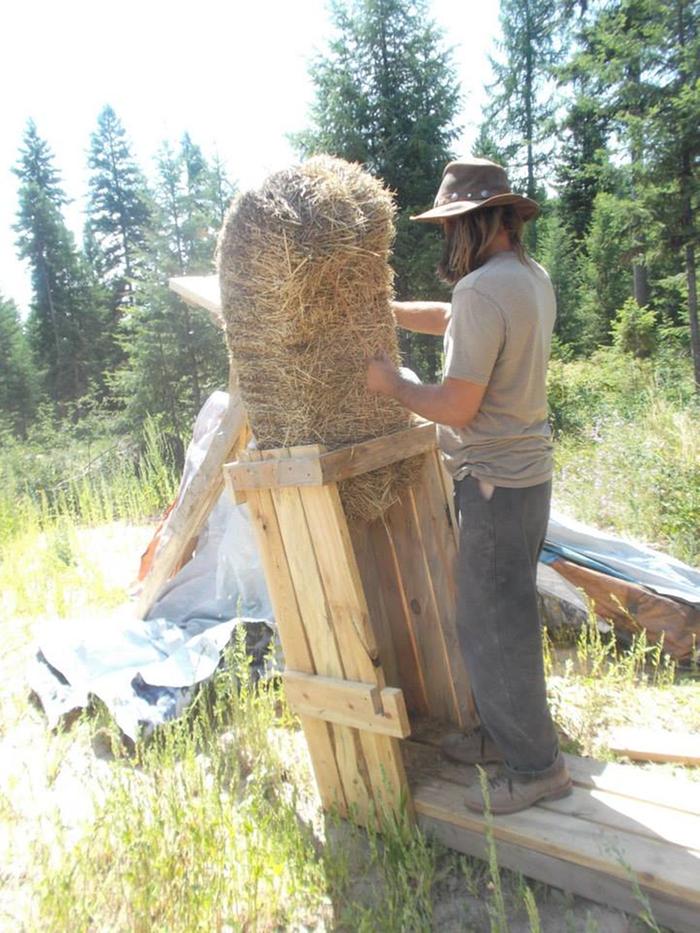 ...and pushes is down into place. 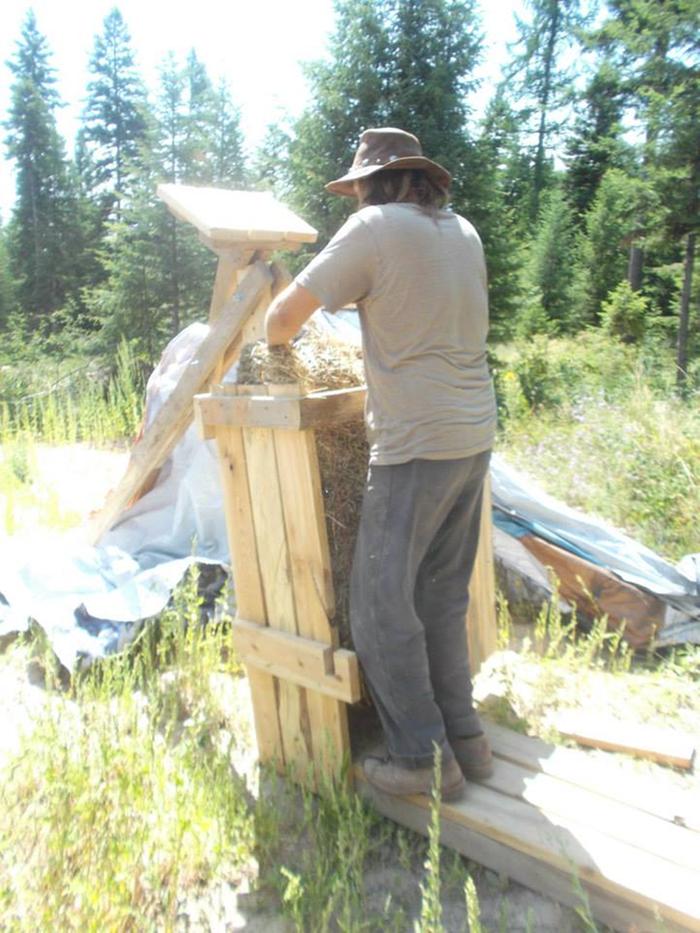 He pulls the loose strings through the slots ready for tightening. 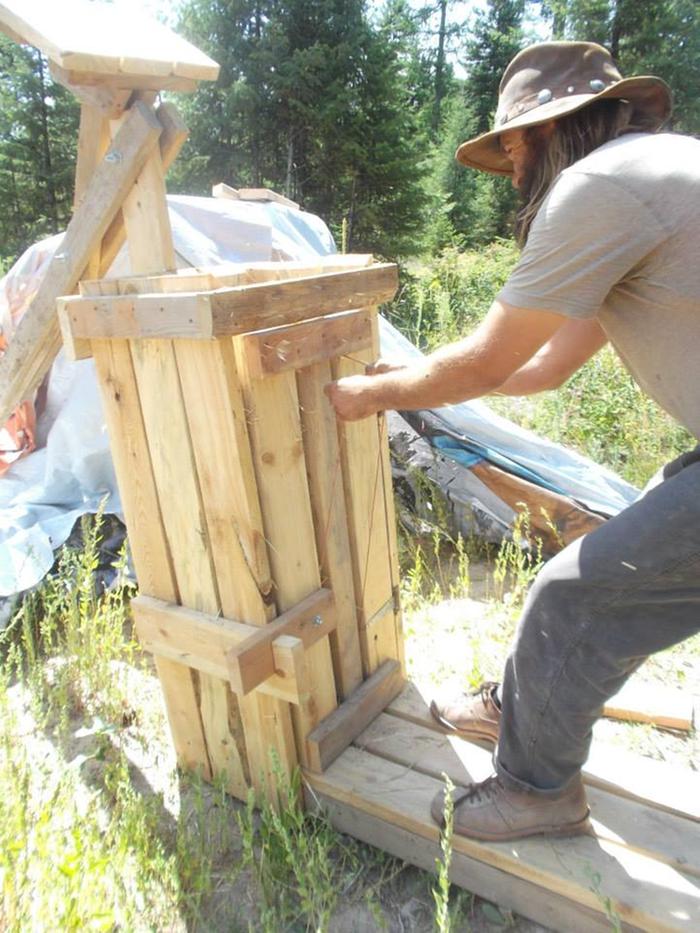 Then starts to tighten the bale by pulling down on the lever. 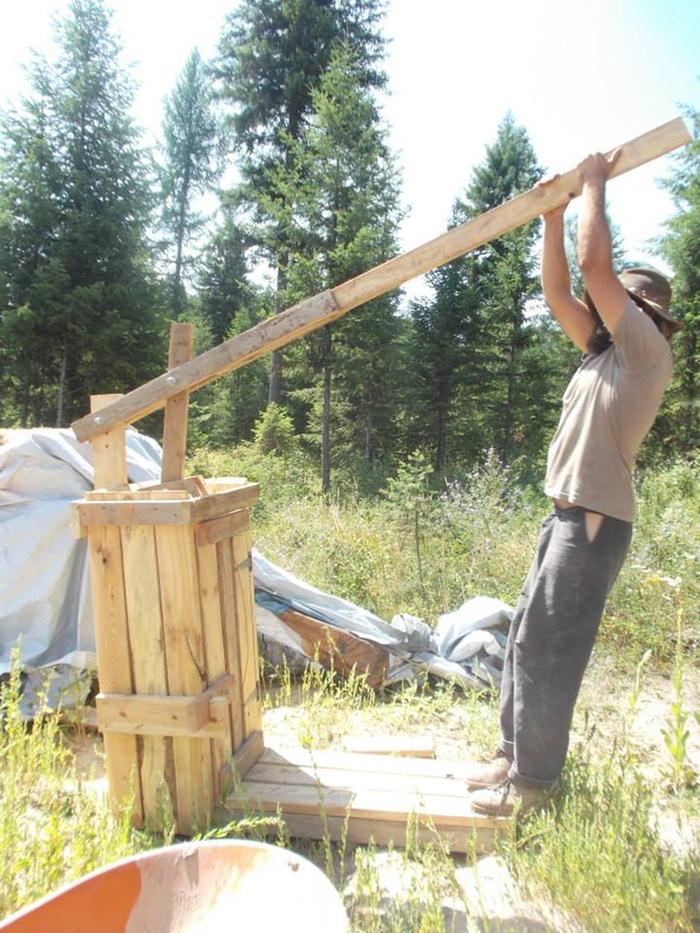 He manages to get the lever close to horizontal. 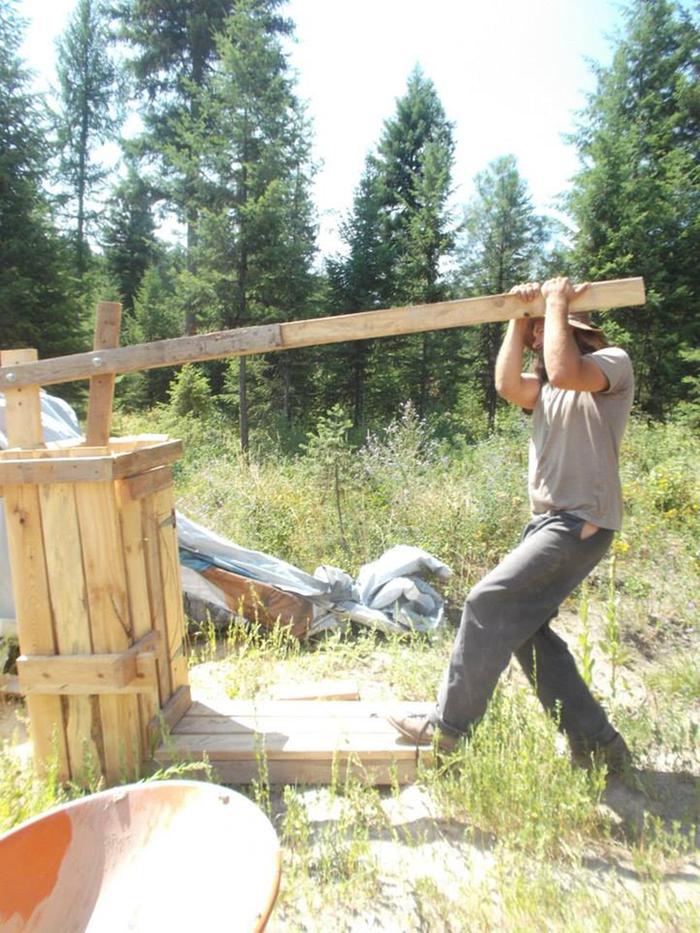 There's plenty of slack to be taken up on those strings now, but Jesse wants the bale tighter still. 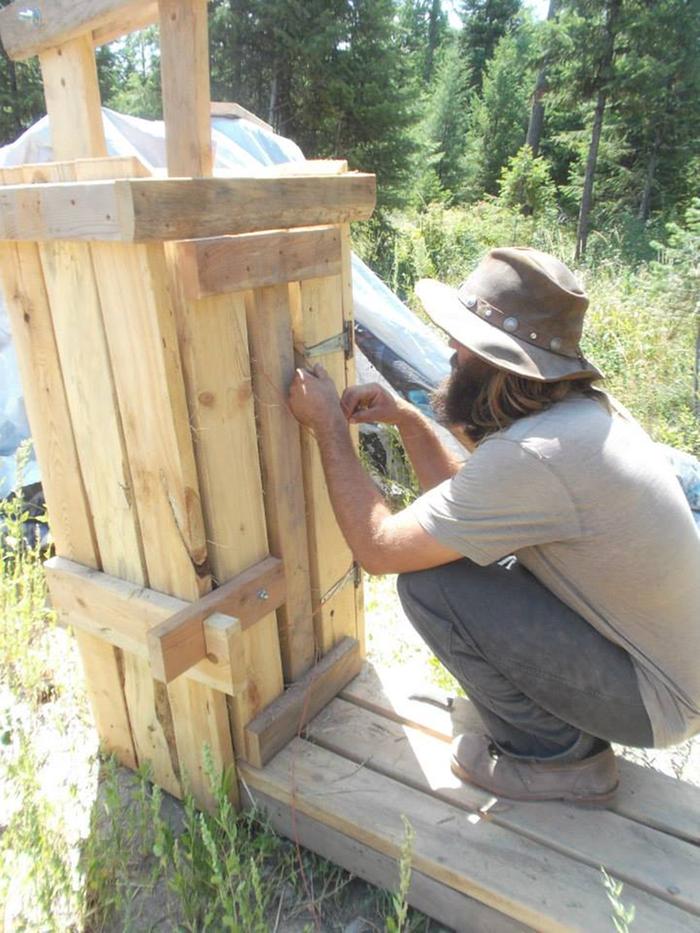 Fred comes to the rescue! Vegan lats for the win!!

The lever is below horizontal now. 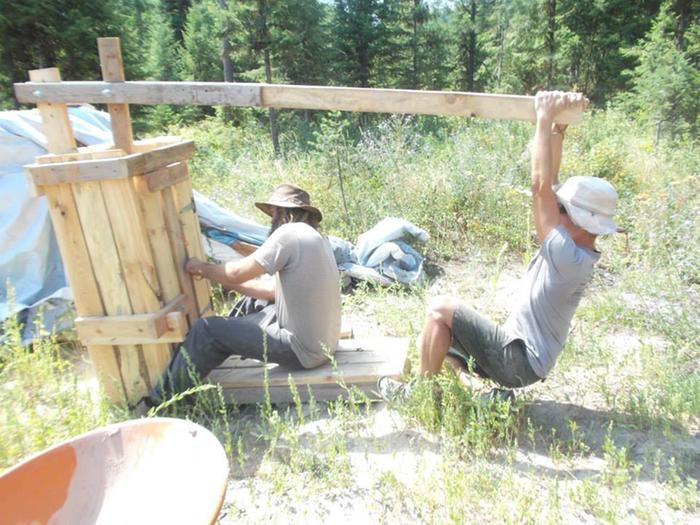 Jesse tests the bale by sitting on it. 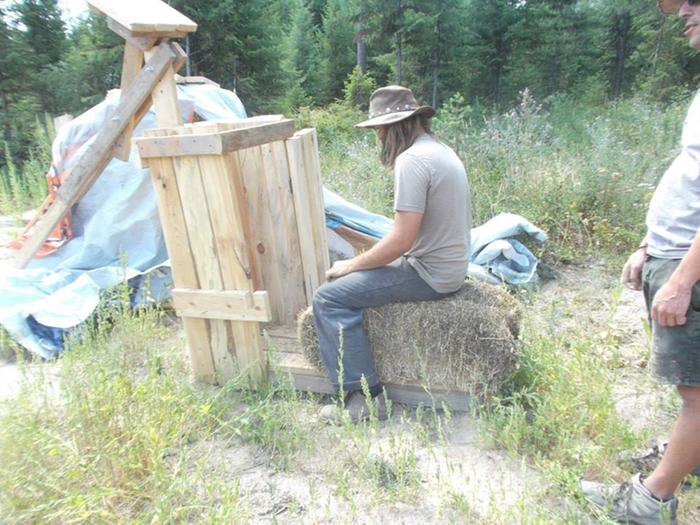 And then by standing on it. It's much more suitable for building now! 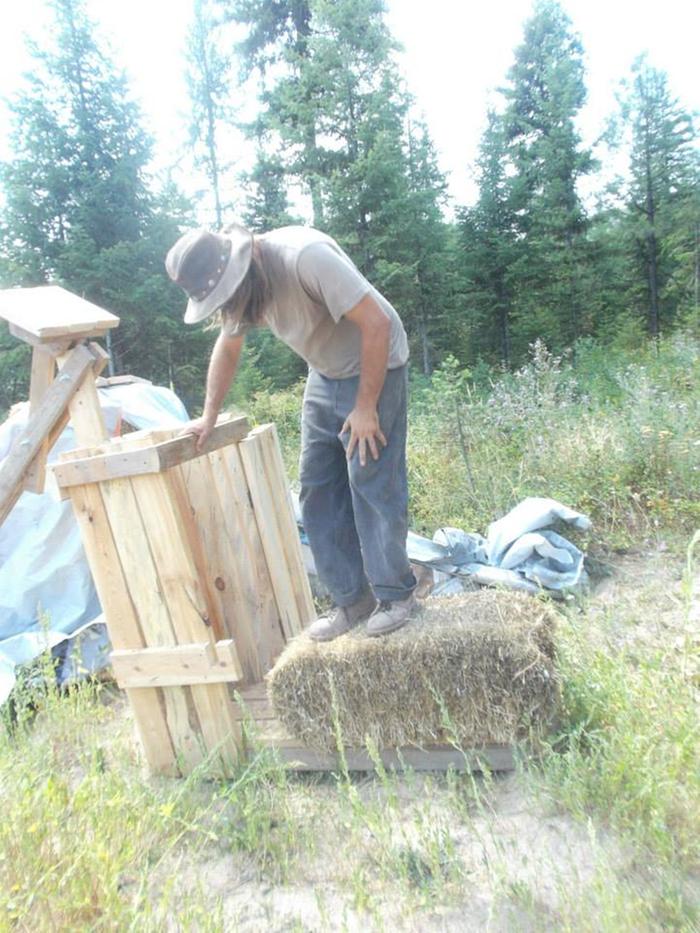 posted 6 years ago
Thanks for this series of action photos! Really useful tool - I hope somebody makes a straw bale structure to really get some use out of it.

Wyatt Barnes
Posts: 318
9
posted 6 years ago
That is a neat design for the job, is there a resident genius or is that a known design?

posted 6 years ago
i believe jesse built it. not sure where he got the design though. do you know burra?

Cassie Langstraat wrote:i believe jesse built it. not sure where he got the design though. do you know burra?

Um, no, not sure. Better ask Jesse!

Joe Braxton
Posts: 320
Location: NC (northern piedmont)
15
posted 6 years ago
These plans look like the ones, if not please correct me. 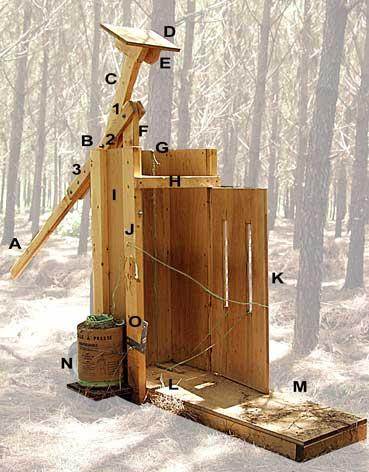 posted 6 years ago
I'm very interested in building a straw press.
Does the builder have any plan of this one?
Thanks.
Glenn Herbert
gardener

posted 6 years ago
Thanks, I had seen it, I thought about the Wheaton laboratories one...
Thomas Kinstle
Posts: 6
Location: Kalamazoo
posted 6 years ago
Farmers can adjust how tight the straw bales are on their baler. The main issue though is how tough the strings holding the bales together are; sometimes you pick up a bale held together with hemp twine and they explode.....so you may save some time looking for bales held with plastic twine or wire.
Sue Rine
pollinator
Posts: 344
Location: New Zealand
25
3
posted 6 years ago
Mostly the hemp twine is fine as long as the bottom layer of bales in a stack are laid on their sides so the string is not in contact with the ground.

posted 6 years ago
Why not make the lever assembly (parts A and B, in the illustration given above by Joe Braxton) out of steel tubing? One reason to use steel: these parts will receive a lot of stress over the lifetime use of the device. Part A could be made from round tubing, and part B could be made from rectangular-cross-section tubing. The round tubing would probably fit your hands better and be more comfortable, if the device is used hour after hour - a second reason for using metal tubing. The tubing pieces could be arranged to fit the dimensions needed and then be welded into permanent position along the length of the lever.

Tam Deal
Posts: 64
4
posted 6 years ago
Tubing is an option, but it is more expensive, and pretty messy unless it is galvanized or powder coated. The right wood can last 10 - 20 years out of doors without any finish whatever. And if one is using the press in cold weather, the wood is naturally warm to the touch. Steel is also relatively heavy if stiff, while Miracle Fiber W has pretty much the best stiffness to weight and stiffness over cycles of use, of any material other than carbon fiber composite.
Earl Mardle
Posts: 46
4
posted 5 years ago

Joe Braxton wrote:These plans look like the ones, if not please correct me.

The plans are no longer available at the link, I also tried a search on baler there but no results. Any more ideas?

Also, I assume this is not just for tightening slack bales and that you can make a bale from scratch with it, yes?
Nick Watkins
pollinator
Posts: 38
Location: Akron, Ohio
4
I like...

Earl Mardle wrote:The plans are no longer available at the link, I also tried a search on baler there but no results. Any more ideas?

Also, I assume this is not just for tightening slack bales and that you can make a bale from scratch with it, yes?

I found an archive of the pine forest management page above at the Wayback Machine. Here is a document capture showing the lumber dimensions (click for full/print size): 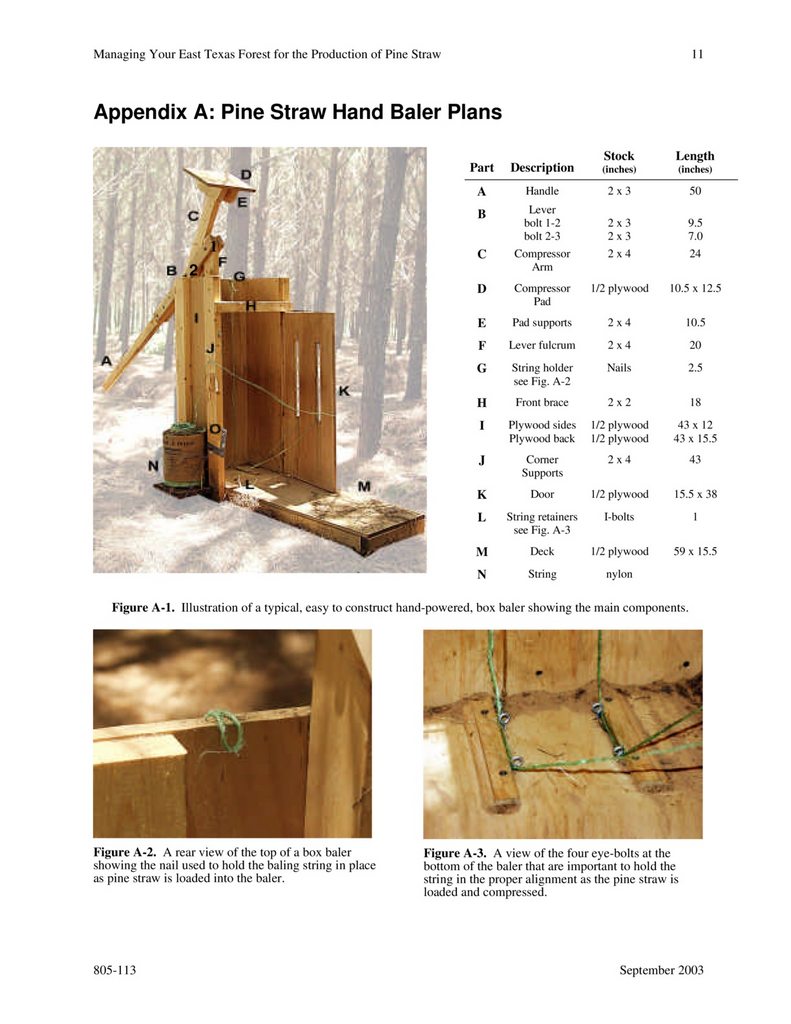 If you're interested in the full pine forest management content without the broken images, one of the archived pages (such as the April 6th archive) at the link above has a PDF version of the page.
Dan Boone
gardener

Nick Watkins wrote:If you're interested in the full pine forest management content without the broken images, one of the archived pages (such as the April 6th archive) at the link above has a PDF version of the page.

Ooh, so it does!  I'm going to link that directly for people, thanks Nick!

posted 5 years ago
I love this! I can envision some great uses for it - baling up various mulch or feed materials by hand, or compacting things like recyclables so they take up less space. Very cool machine!

posted 5 years ago
Holy Crap!!    I guess a person could put all kinds of debris in that thing and build walls with it!  That's awesome!  I might not make the walls load bearing until I tested it for compression compared with machine bales... but even if it isn't of load bearing potential (and I'm not saying it isn't) this could be revolutionary for some folks as infill between posts in a post and beam structure.

posted 1 year ago
My old baler fell apart after I got my hay up for the winter. I was looking for a more sturdy design.  I really liked the first one shown in this thread.  Mine had been made with plywood.  I also like how the plunger mechanism is adjustable. Because I work by myself, I will add a device to keep the lever down while I tie it off.

posted 1 year ago
Has this been tried with a pile of leaves to make a "leaf bale"?

Or a thin layer of straw outside with a gooey leaf center?

Posts: 2334
Location: Cascades of Oregon
395
posted 5 months ago
I have one that uses a cam and it's a one-man operation. It is also horizontal load rather than vertical. That one looks like you could get a very tight bale. Just looking at the tying off procedure I'd be tying the bale off and that lever would break, I'd tie off on the other side.

James Buck
Posts: 2
posted 5 months ago
Has anyone tried this baler using loose straw? I also wonder if it could be used with rice straw as that is what we have the most of in Japan.