posted 1 month ago
I'm doing some changes on my chicken coop. I have been thinking about what to use for water.  I have had chickens for 15 or more years, and I'm still not satisfied with the water situation.  I have tried several options.  I started out with the container you fill and hang. It works, but it's heavy and a lot of work.  The chicken nipples seemed to be a great option, clean, and I can leave it hang and fill it with the hose.  I have seen the chickens use it, but I didn't have to fill it very often, and if it rained, or the hose made a puddle all the chickens would drink like they were dieing of thirst. So I don't think they like it.  I got a bowl that has auto fill which is what I have used for a couple of years.  There is now a sign on that hose not to turn off. The plastic top has been removed because it was knocked down in a way to block the hens from the water.  I hate this option!  As you can imagine the water is always discussing.  I dump it every day and use a brush to clean it.  Once in a while I take it apart and clean it.  We have very hard water, so this is no east job, and is gross an hour after I'm done.  picked up a couple of cup things that go into a bucket like the nipples.  I have also considered building a frame around the bowel so they can only stick there head in.  I live in California, so in the summer going without water even for a short time can be a death sentence.  If you have a water system you like, I would love to hear about it. Thanks.

posted 1 month ago
Here'w what I did last year.   Zero problems and I have ridiculously hard water.  Haven't had to clean the nipples (yet) probably in a couple of months, though.  If I do it over, I'd like to try these cup nipples instead of the one's I'm currently using.  It seems more user/chicken friendly for them.
I run two buckets, both of them connected to the drip now in case one breaks, or stops working for some reason.  Same as you, probably only hours without water before things go south with their health if they don't have access to water.

posted 1 month ago
We have a flock of 10. We use an ordinary dishpan. I think a heavy oil-change pan would work too. Not too light that a chicken could step on it and overturn it. Or put a brick or stone in it to weigh it down.

We keep our water in a shaded area when it's warm and sunny, it helps to keep algae in check. In the winter we keep it in a sunny patch to help it not freeze.

I clean it about once a week or so, more often if it's dirty. To fill it, I bring in a five-gallon bucket of collected rainwater and just pour it in.

Stacy Witscher
pollinator
Posts: 954
Location: Southern Oregon
267
posted 1 month ago
I use the hanging bucket with nipples and love it. Anything on the ground they just knock over. It did take them a while to get the hang of it, but now it's great. I fill it about once a week. We have hard water but it's never been a problem. The nipples are replaceable if need be.

posted 1 month ago
Flock of 20 here. I use the hanging (or rather standing on top of cement blocks) bucket with nipples. They definitely drink their fill on hot days. As you saw with yours, they will still rush over to drink as soon as I turn on a hose or drip irrigation. I think they just like the water to be very fresh, as they also rush the bucket when I’ve just refilled it.

I’m planning on replacing the bucket with an irrigation line that has nipples directly in it, so that the water is always fresh and never needs to be refilled. We’ll see how it goes.

posted 1 month ago
I use the nipples due to freezing problems most of the winter.  But if I didn't have to worry about that, and house water was near by, I'd be very tempted to make something like this.  Use a sprinker drip irrigation system to dribble water in very slowly so that it ba-dum-slooshes only every 30-60 minutes.  Then if they crap in the trough/bowl, the rush of new water will rinse it away.

posted 1 month ago
Because I already had a few of the more "traditional" waterers before I started on my latest version of a poultry flock, I have simply stuck to the old standby - a metal double-walled 5 gallon waterer on some concrete blocks that brings it to the height of the chickens' backs. I rinse it off and refill when I can easily move it by lifting up (that means it's down to about a gallon or so). .

Because we live in an area where there is a lot of heat and a lot of humidity, I had gotten into the habit of having extra buckets around for the dog (it was more important when we had more than the one, but the buckets still work and she enjoys the different "flavors" of the water), and the chickens enjoyed the extra cooling and drinking spaces.

When we added the geese, we also added some of those tough rubber feed bowls. The geese have another two much larger horse/cattle feeders that are dumped, rinsed and refilled daily. The chickens enjoy those drinking areas, too.

Basically, my flock has one 5 gallon double walled waterer, two 5 gallon buckets in different locations, 2 smallish "tough rubber" dishes, one larger "tough rubber" dish, large enough for an African goose to splash in, and a slightly larger yet, hard plastic dish that is currently the site for amorous geese.

Between the 24 chickens and 5 geese, they somehow make do.

I would like to use an auto-refilled version, but putting a dedicated water line to the yards in which it would be useful is too much of a bother and expense, right now. So, I use a hose. It gives me time to interact with all of the birds and see how flock dynamics are changing.
I have seen people use the nipples and have good results, but the geese need a different system to stay healthy.
I like the idea behind modifying a shishi odishi to serve for a water feature and a chicken waterer.  I would need to consider how much goose-ish interference I was willing to tolerate, though.

posted 1 month ago
I tried the cup type chicken waterers.  The chickens love them, but they don't work.  In order to refill the cup you have to push on the little rod thing in the cup.  Seems easy enough, and I thought when they drink the water they would bump it enough to activate the fill valve. No I watched for a while, it never happened.  I filled them up last night, and were empty this morning.  I got them at Tractor supply, I hope they will take them back.  My chickens are ether to dumb to use them, or it's a bad design.  Bummer.
I put the bucket with the chicken nipples up and emptied the gross water bowl.  They will have to use it, or be very thirsty.  I will keep an eye on them.
I ordered a different cup that auto fills. When they drink the water the cup gets light, tilts up which opens the valve and fills the water.   It got pretty good reviews, so we will see.  The cost was 2 for 10, or 4 for 17.  I got 4. They are returnable if I don't like them. I hope they work.
IMG_20210227_160726537.jpg 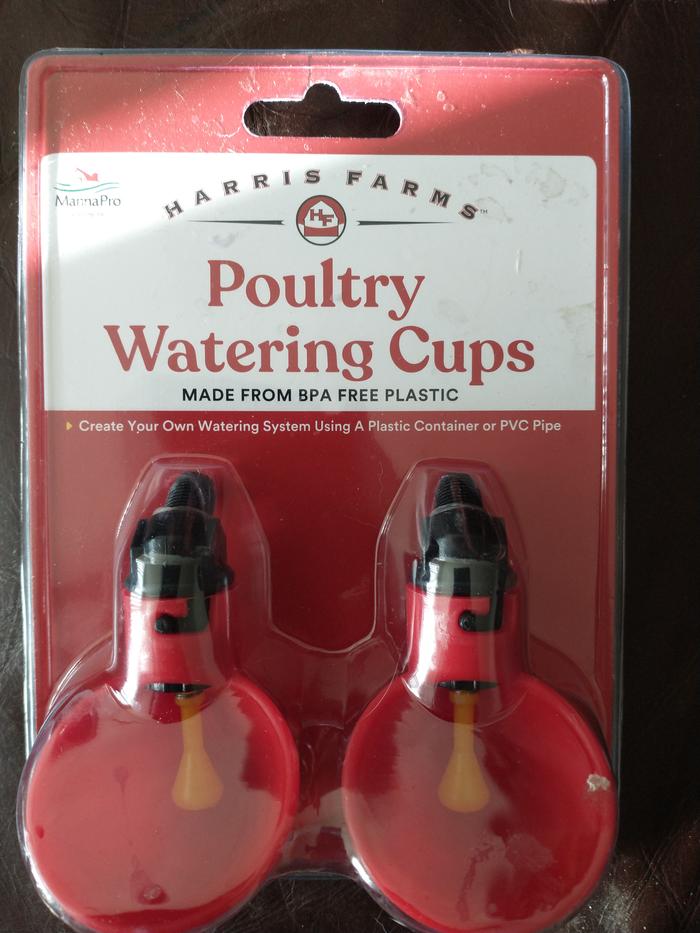 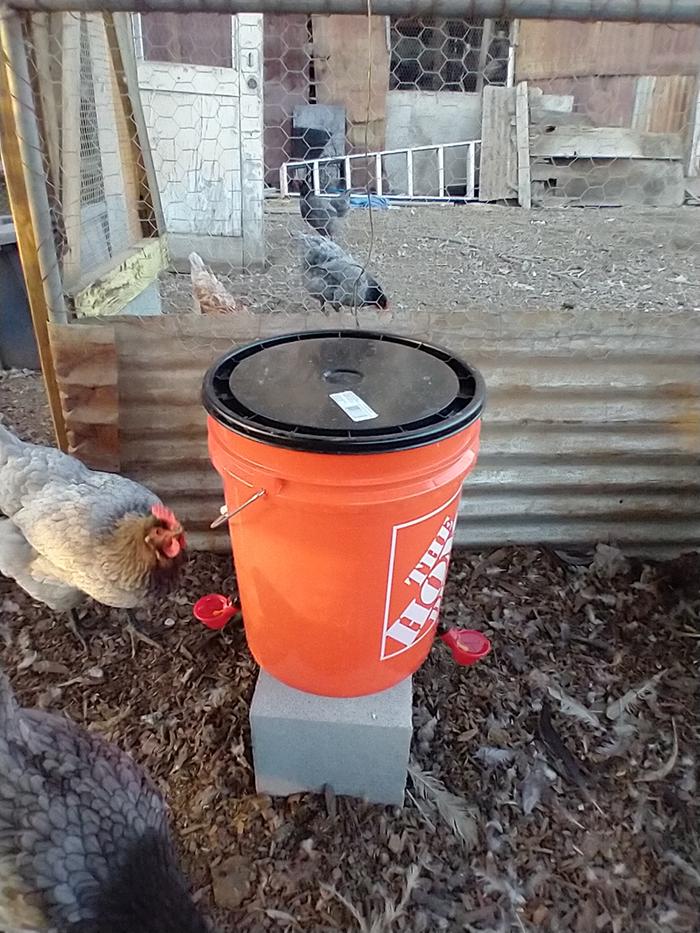 posted 1 month ago
If they're new to them it takes a bit for them to learn.  Just call them over and tap the thing to make water come out.  Peck/tap at it and they'll eventually figure it out.

posted 1 month ago
Ok I think this is the one.  Time will tell.  I ordered this cup style from Amazon. The company is Rent A Coop.  2 for 9.95  4 for 16.95 or 6 for 24.95.  For the most part they got good reviews, and in a few cases that had problems they said the company was super to work with.  I ordered 4. The company sent me 1 extra on them, nice.  I'm going to keep it just in case one needs to be replaced.  I got them 1 day after I ordered them.  Very easy to install. I put 4 cups in one bucket. Instead of hanging it I put it on a cement block. The chickens used them right away.  Best of all they refill themselves.  Every time I go out the cups have water.  I will keep the chicken nipple bucket up for backup.  My plan is to only put a couple gallons of water in each bucket, so the water stays fresh.  The cups get a little bit of dirt in them, but still way cleaner than the bowl.  Thank you everyone for all your help.
IMG_20210304_171605859_HDR.jpg 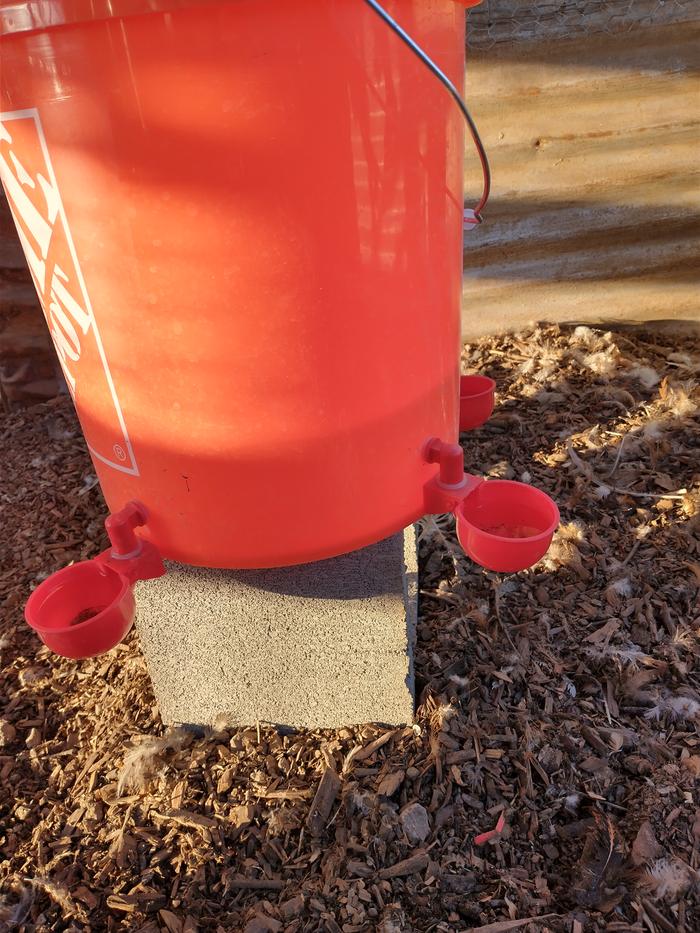 posted 1 week ago
Quick update.  I love these cup waters from Rent a Coop. They fill themselves without any effort from the chickens.  They do get a little crud in them, but easily spray out.  I left the bucket with the chicken nipples in it as back up, but the chickens seem to like the cup ones.  I'm totally happy with this one and would buy again.