what is a willow feeder

posted 7 months ago
It may be too late since you asked for feedback quickly but I always had a LOT of blood collected in my cup. I read the instructions where it says "a little blood is fine" and I think okay where do I put a lot of blood? Will I contaminate everything with a lot? I don't know. And I imagine some poor shy woman NOT wanting to ask Paul. So that's my question / suggestion that I didn't see from anyone yet.

posted 7 months ago
Are we talking about five gallons?  Two gallons?

But I do see your point ...   somebody could be thinking that what is in the diva cup is more than "a little" ...

I wonder if the concern would be mitigated by seeing how big the can is.  And the idea of adding a cup of sawdust.

posted 7 months ago
Why not just say blood is fine?

After all, it is just blood. Mostly water and quite biodegradable.  ;-)


Do we want any words about the sawdust, or is this good?
shark-week-wheaton-labs.png 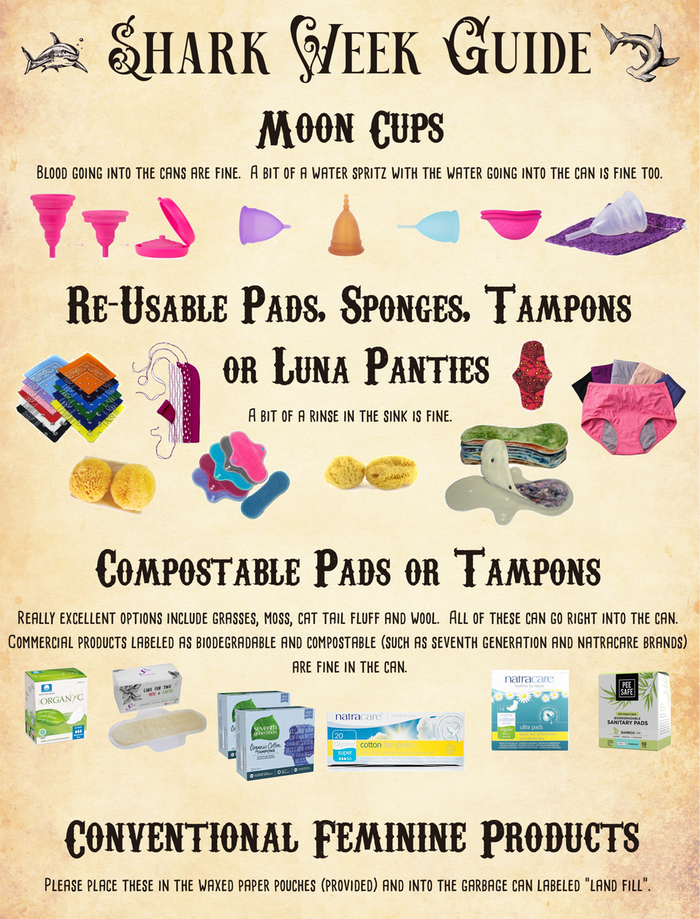 
Do we want any words about the sawdust, or is this good?

Devoured by giant spiders without benefit of legal counsel isn't called "justice" where I come from!
-Amazon Women On The Moon

posted 7 months ago
Not about the signage, but relating to the video script.

I am all for the concept, but the bit that sticks out for me is the pharmaceuticals being raised as a problem in the video script, then peeing on the ground being okay. Many if not most pharmaceuticals are excreted via urine. Will those be broken down by soil bacteria, or still make their way into groundwater?

Obviously they have more of a chance to be broken down by the soil compared to just being dumped directly in the river, so it's still the best option, IMO. But just wondering if this point needs to be raised in the video.

Oh, and "clean used sanitary towels" - ewwwww! There is no such thing! Once used, even the most determined scrubbing won't get the things really clean!

Robin Katz
pollinator
Posts: 231
Location: Idaho
124
2
posted 7 months ago
I'm with Jane on this one. Asking a woman to use "clean used sanitary towels" is like asking a man to use "clean and used jock straps" or "clean and used condoms." If the immediate reaction was "eww" then there's the answer, even without the whole issue of potential transmission of blood-borne pathogens. It's highly unlikely that the previous user of the sanitary towels autoclaved them to make sure they were clear of pathogens.
Nicole Alderman
master steward

Do we want any words about the sawdust, or is this good?

posted 6 months ago
Paul had a few little changes he wanted made to the Willow Feeder sheet, and a boarder put on it. Here's the new, revised Willow Feeder page!
willow-feeder-boarder-copy.jpg

paul wheaton wrote:I'm not sure what came over me, but I just started to write this script for a future youtube video.  Something to give a quick and simple outline of what is a willow feeder.


Of course, there are a thousand more details to add in.  The idea was to try and have something kinda short - just enough to give a person a general idea of what a willow feeder is.

Spelling? Grammar?  Ways to make the message simpler and shorter?

When you say "quick and simple" and "kinda short" to me that means making multiple, smaller, pointed videos rather than a long all encompassing one.  I recommend going for the "ethos" and "pathos" angle before the "logos" one.  Looking through chaeau de poo, willow bank, and willowonka threads, I saw no pictures of that finished product.  I need that gut feeling of "yeah, this is safe".  That's not a logical persuasion, but rather a gut one, based on quickly earned trust.

I really need to see someone taking a big, bare-handed whiff of 2 year old, semi-composted petrified poo in order to personally become convinced to watch or learn more.

1. So a first video could be purely intriguing, rather than informative.  1st video purpose is solely to visually convince people that "It works!" enough to earn their trust so they want to learn more.
Scene: an Outhouse


2. The second video could explain problems/benefits of the current, mainstream sewage systems used in Western cultures.

4. Fourth video explains the benefits of your "Willow Feeder" system, convincing people that this new alternative is actually better.

5. Operation sequence explained in enough detail that someone who believes it is better feels confident that they could operate it.

6. Construction and maintenance explained so that they are now confident they could build it, too.

The proof is in the pudding poo.