During my last kickstarter I offered it as a stretch goal.   So I am putting it here for those folks.   And, I figure, if somebody is willing to part with 25 bucks then they can look at an unfinished book too. 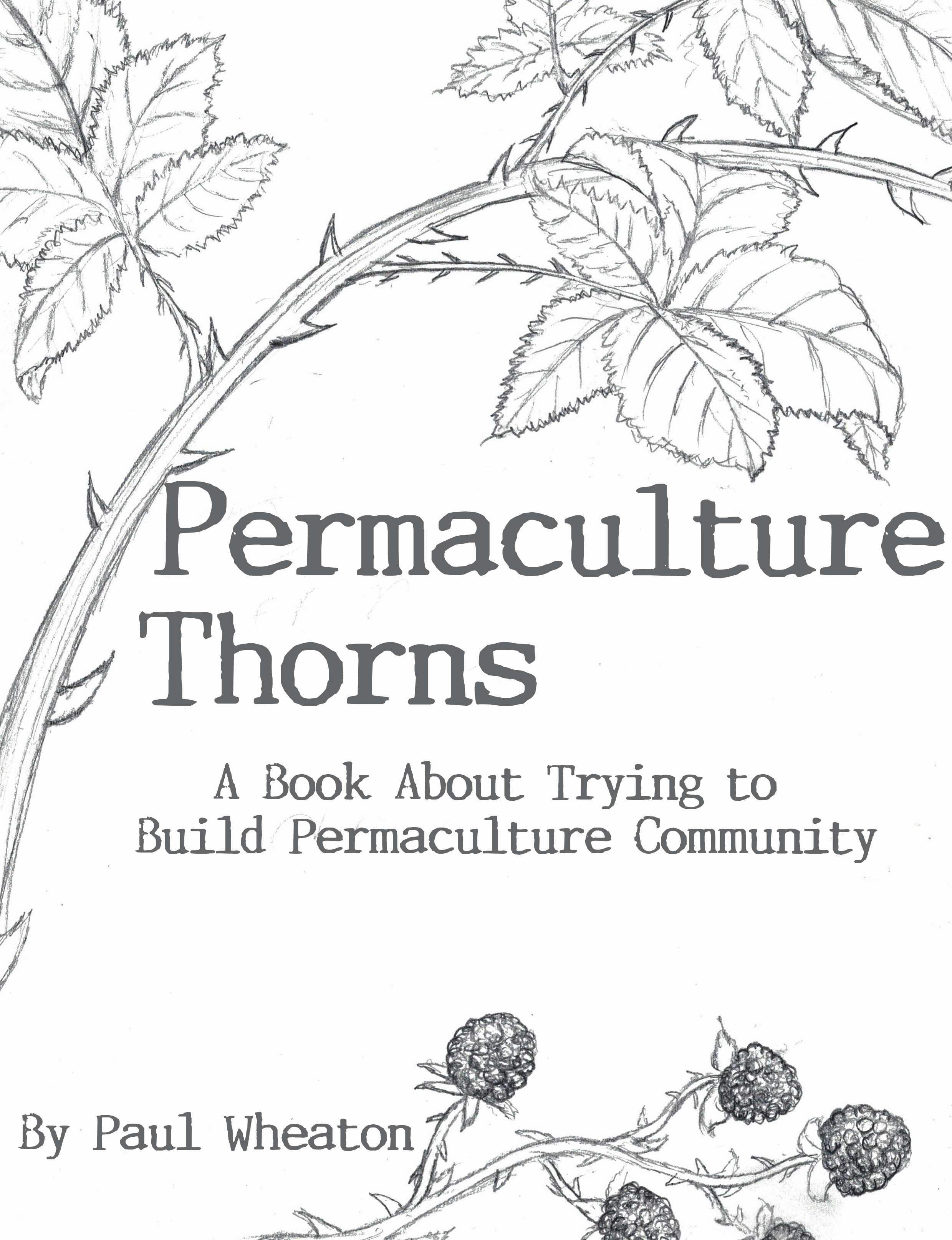 posted 6 months ago
OK, I'm hoping I'm posting in the right place...and if not feel free to move this to where that is.

I definitely enjoyed this, and have enjoyed the podcasts about this topic previously.

Why do people want community? for the emotional spoons.  We do get that from being in groups.  There's the whole "historically people lived in small tribes" thing, and lots of research showing mental and even physical health benefits from people living in community vs. living "alone."   (Theres' really no such thing as alone, actually, when you live alone you live with Big Oil.  But there are valid transitional tools).

To get the spoons then--and to get them in person rather than just over the phone or in a social media comment--we could look for some structures for communicating.  Non-Violent Communication, sharing circles, etc.  These have drawbacks--NVC has been covered abundantly elsewhere and obviously isn't a panacea, but it's got some basic common sense to it; sharing circles can help people release charge or get some spoons, but in my experience they don't attract a lot of people, and the people who need them most stay away.

I think a better tool, one that gives me far more spoons per minute than almost anything else, is drL--a body-inclusive, non-verbal-language-inclusive format for amplifying consciousness.   It was developed by people who were passionate about Non-Violent Communication but flabbergasted at how NVC teachers still seemed to have the same problems in their lives that they claimed NVC could address.

I have been looking for permies to try this out with for a while...haven't had takers yet, but it's the highest yield on return of pretty much anything I've devoted my time to.   Please purple moosage me!

The main ingredient this has, and that Ganas has some of as I understand it (Ganas is a long-surviving community that shares income, in New YOrk City), is feedback.  Not human's thinking feedback, in the case of the drL, but body and behavioral feedback from the other members of the cluster.

(Sounds familiar, no? "accept feedback," from your landscape.  Bill Mollison studied human behavior, and said somewhere that permaculture was derived from this study primarily!)

I hear that you don't want to hold hands and sing in a circle, Paul, and that's fine, but I also hear you need to replenish your spoons.  What would a system designed to do that with a group of trusted people look like?  I think drL is the best thing out there, but maybe there's more innovations to be made.  What's your design?

Other things that also are spoon-related: decision-making processes, "community glue" practices (Diana Leafe Christian's term for feel-good bonding projects like gardening together, doing a work day, having a party or sharing a meal), and so on.  Decision-making processes are a slippery slope, and it's charged with the function of getting a clear decision at the end of the meeting, not simply generating spoons.  But of course if it can generate spoons along the way, all the better--or at least not deplete them as much as business or committee meetings are famous for doing.

Sociocracy is the favored format nowadays, by Christian and others--I've found it a bit confusing and haven't experienced much of it directly, but I would love to see more posts about it from people who have lived in communities using it.  I have a sense it's got similar costs to what consensus has, and I haven't yet seen open source, free documentations of how to do it which is a problem.  It's fine to make money on one's work, but the law has to be freely accessible to all as a basic principle of fairness.

There are lesser known tools from the corporate world or medical fields.

--Edward de Bono's Six Thinking Hats helps individuals or groups get out of "I am right, you are wrong," and into constructive thinking;
--Breaking the Rules by Kurt and Patricia Wright talks about asking "right questions" that build emotional energy--in oneself or in others.

Even if you go the dictator-hybrid route, there's still plenty of things that can be discussed and opened up for discussion or input, and I think a book on community ideally ought to include an assessment of sociocracy.  If it could include some of these outside-the-permaculture-box tools too that would be even better.

My main wish for the Thorns book is that it address the long-term, visionary aspect of community as well as the here-and-now nitty gritty.  The book is really strong on learning from experience--and accurately assessing what's working and what isn't in that, which is really important.  But I want to see a new design that's not just an assemblage of the old ones (consensus plus dictatorship), but goes beyond transitional.  Or find the Sepp Holzer of community building and talk to that person.

Diana Leafe Christian is awesome.  But I don't see her as an innovator of new systems of collaboration.

I think the inventors of drL are, as a collective, the best there is today.  Vic Baranco, who invented the Mark Group, was the Sepp Holzer of community, but also 10 times as controversial.  And he's dead, so talking to him is complicated.

There's a difference between being a really great charismatic leader and being really great at designing systems that can be replicated.

And then there's intergenerational systems--they may appear to be failing a lot of the time for a lot of the people, but have some pearl within that shines over the long haul.

What if the people in the system grow more noble over time, and have more surplus spoons over time, and stay in the community for longer periods, and succession by the next generation is smooth and easy?

This thought is more of a question than a thought at this point.

Looking forward to seeing this evolve.

posted 6 months ago
Your description of Symboo village (and the people in it) sounds mighty enticing. Utopian, even. It sounds very similar to the dream in my head of "a town with no cars that can feed itself."

Now I just wish I could go visit Symboo village more than just in my imagination. Live there.

(And maybe when I grow up I can be cool enough to be part of village B or C. (And maybe we'll get to see what Step 3 and Step 4 look like.))

posted 2 months ago
Wow! I haven't read a whole book straight through in probably three years. Couldn't put it down, or couldn't look away is maybe more accurate since it's a pdf.

An insightful look at what's needed to select, form and maintain community by going with (human) nature. Some great examples of how a leader can preserve the harmony of the community. Some great ideas for designing the community to work with the nature of its members and their needs.

If "the click" podcasts resonated with you and community is in your future, you will probably love this book.

posted 1 month ago
Wow, a free & unpublished book by Paul! I'll do my best to read it and then write my review of it

posted 1 month ago
Thank you, Paul.

I hope your generosity returns to you a hundred-fold:)

“Knowledge is knowing a tomato is a fruit: Wisdom is not putting it in a fruit salad. “ Brian Gerald O’Driscoll

posted 1 month ago
Just wanted to put my plug for having more coverage of "paired programming" at the Lab.  For the book, and also for the podcast.

It seems the devil's in the details, and a lot of organizations think they're doing paired programming but are really just setting up their chairs a little differently.  Only when you stick to your guns and really trust the process does it bear the most significant fruit.

Thanks for doing the experiments!

📦Buy this as a gift!
Boost this thread!
permies Affiliates Program
Click here to learn how to be an affiliate for "permaculture thorns eBook - DRAFT", and start earning 50% of the sales it makes!
Similar Threads
More...