posted 2 months ago
Okay well I thought this one might be worth some BB points.

Long story short: My sister recently purchased 5 acres. The previous owner offered to leave the chickens and ducks for her. She asked me if that was a good idea and I stupidly said "yay poultry!" without checking out the birds or set up. Turns out, the previous owner only had the land for 3 years... AND NEVER CLEANED THE CHICKEN RUN and maybe thought about cleaning the coop and nesting boxes. While I did not get a chance to snap photos of the 2 hours a spent clean petrified poop out of the nesting boxes (and maggots... gag!) I did get my Mom to snap photos of me rehabilitating the chicken run (She was working on cleaning out the duck coop).


The Start: Notice the mound under the perches. Needed a pick axe to get through the top layer. 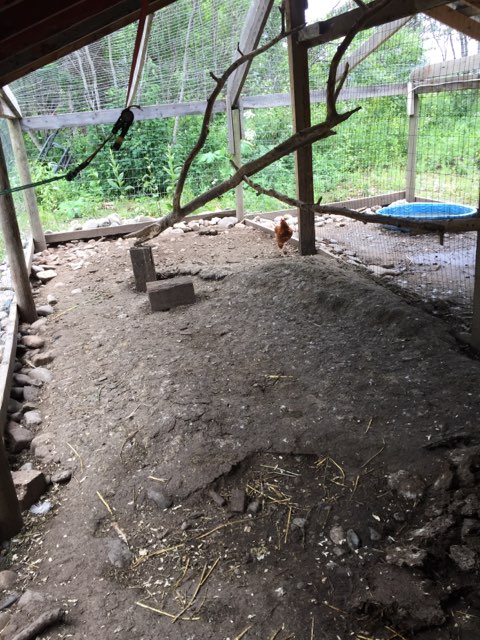 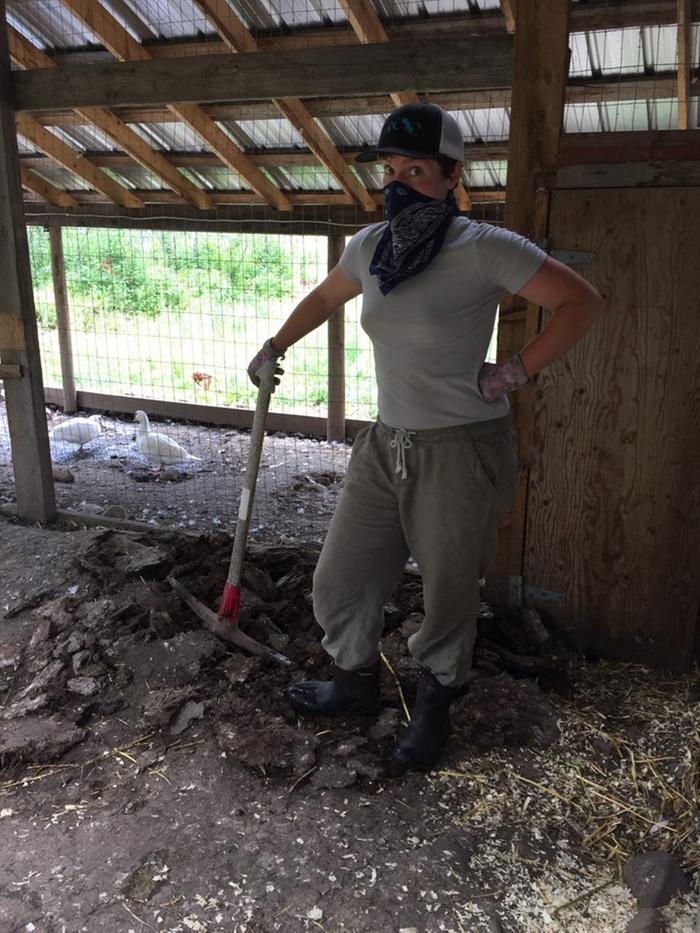 Chopping up all the poopies! 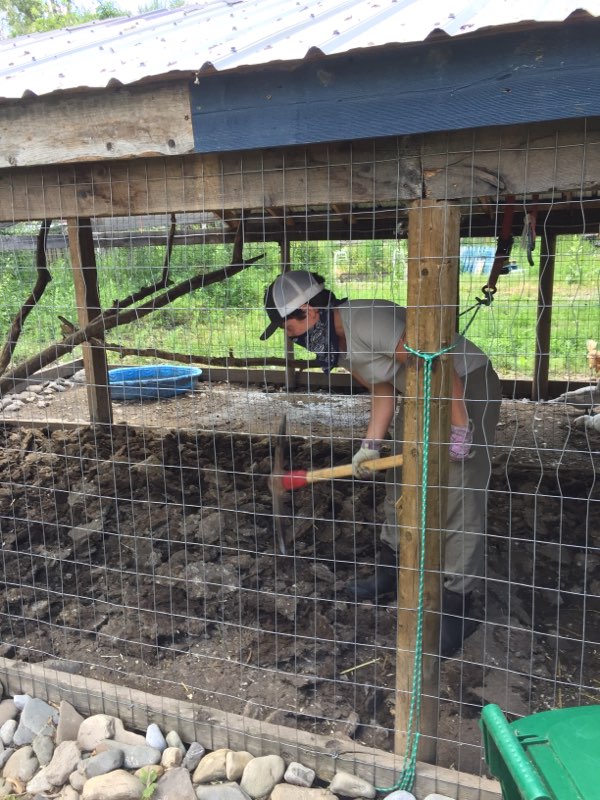 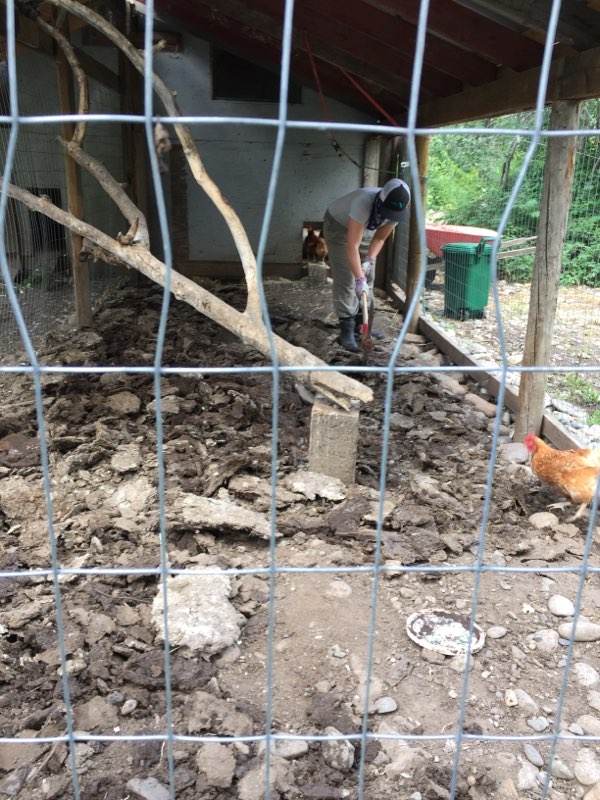 Made a pallet compost bin to hold all the poopies for later. 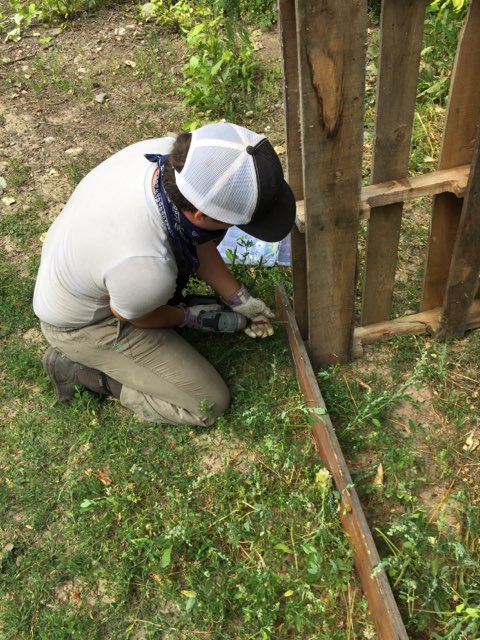 Shovelling out the poopies. Many, many, many wheel barrel loads later: 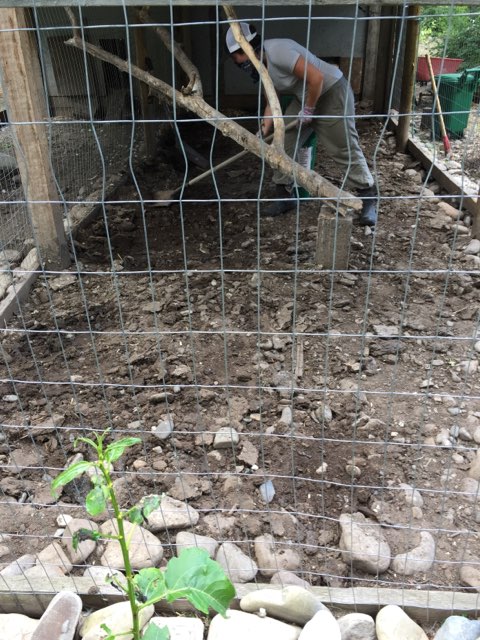 Had to make a second compost bin to fit all the poopies. Covered the first pile with some straw. 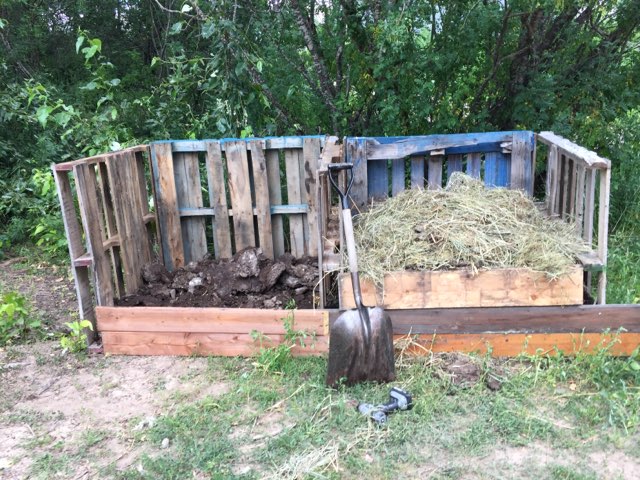 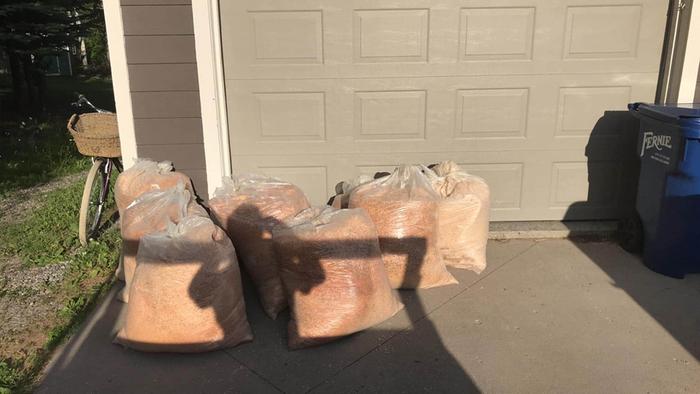 8 of those 9 bags places in the chicken run as a carbon source for a future deep bed mulch system. My Mom's photo skills are... awesome! 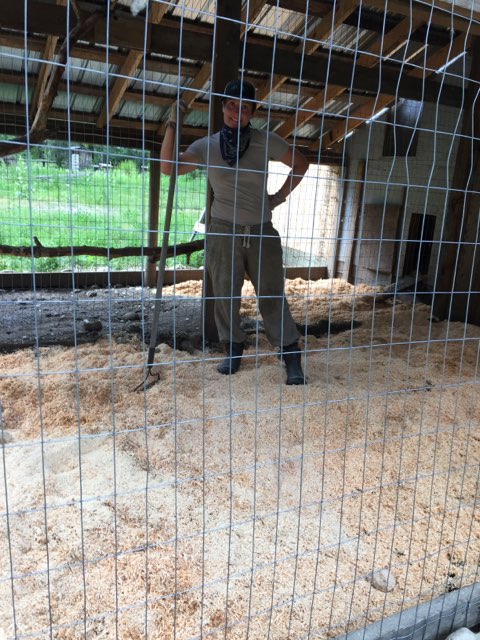 So chickens now roam free and have a much "cleaner" run. You might ask why my Mom and I are cleaning out the chicken and duck area and not my sister? She's pregnant so we wanted to make it a safe place for her to feed the poultry and collect eggs (there was a lot of mouse poop on the duck side)

Either way, I thought shovelling chicken poop might be worth an oddball point :)

I certify this for 5 oddball points

posted 2 months ago
Does this mean I qualify for the Oddball sand badge? The thread is very comprehensive for oddball so I'm not sure if you post elsewhere to claim your badge.

Yes it does, congratulations! I just granted it but it takes a little while to update to the fancier badge.

posted 2 months ago
Next Oddball Submission

We wanted to overhaul our strawberry growing. It’s not been working well for various reasons (slugs, squirrels that steal I ripe fruit, overcrowded bed). And my two boys are super keen on fruit, so I wanted to try something a bit more fun for them.

The plastic barrels were previously used for storing ingredients for shampoo made by a local business. Benign, but the had a VERY thorough clean up before using.

The each barrel was marked with 9 equally spaced vertical lines. Then 5” horizontal cuts were made every 6” down those lines, using a hand held circular saw. They are offset from each other on each vertical. The “back” set of cuts were not made, as they will be pretty snug against the wall so I decided not to plant in them.

Once cut, the area round Each slit is warmed with a hot air gun for around 60 second, and then a wine bottle is force in to stretch it op and make a planting hole. Once the plastic cools it is incredibly strong. Pro tip - you will need about a dozen wine bottles, so the first ones can be cooling in situ while you do the next. It takes about 10 minutes for the plastic to cook enough that I felt comfortable taking the bottles back out.

Once finished they were cleaned again, then filled and planted with divisions from our strawberry patch. Fill was mostly well rotted woodchips.

Time taken: the first was slow. Lots of thinking and measuring time. The second was faster, but still runs into the time taken to cut and then bend all 45 pockets. I think With practice I could get it down to two hours per barrel - using a jig to aid marking and cutting would help save time and improve accuracy.

I made a mistake filling the first one. I filled it with soil then tried to plant the divisions through from the outside. It didn’t work well. Much better to part fill the barrel up to the level of the pockets, the. Add the plants. You can carefully positions the roots and plant so they are back in the body of the barrel, and well spread. Then just add more fill material.

Lots of discussion. Lots of points for using stuff from the waste stream. And then points off for piano factor (plastic). Ending up at 0.5 points.

Michael Cox wrote:I have had two requests from friends to make them one already!

posted 1 month ago
I would like to submit:  Leveling, tiling, grouting, trim and plumbing chase construction in my basement bathroom.

Leveling:  The floor was 1/2" out of level (high at the back wall).  So the toilet and sink were sitting on grout pads that looked like crap.  Since I needed to tile it, the pads had to come out (along with the sink and toilet but that's another BB).  I leveled the floor with a mortar product recommended by the hardware store.  It wasn't fun and it ended up terribly bumpy and had a low spot on one side.  But it was level enough.  I couldn't think of a lower embodied energy solution that would allow for tile to be installed over it.  Total consumption was a 25 lb bag of LEED certified zero VOC mortar.

Tiling:  I laid out and cut to size the tiles for the floor.  To match the future pattern in the rest of the room, I had to start at the door and do as much as I could reach one day.  Then kneel on the freshly set tile to do the back half.  Cutting around the toilet flange and other details had the usual comedy.

Grouting:  It's been 10 years since I did grout and it shows.  I mixed it up too sloppy but it turned out ok in the end.

Trim:  I reused the trim from the room.  But I changed the shape of the back of the room and the taller floor changed the size of the door trim.  So 10 trips to the chop saw and it all fit again and got reinstalled

Plumbing chase:  Behind the toilet and sink the drain and supply pipes were just surface mounted and ugly (according to the missus).  So I found some old tongue and groove boards and cobbled them around the piping to make a chase.  It had to be made very tight to the piping so the valves would still be accessible.
Before.jpg
That-s-how-unlevel-the-floor-started-out.jpg
Dam-across-the-doorway-for-leveling.jpg
Leveled-and-starting-to-lay-out-tile.jpg
First-half-of-the-room-set-and-drying.jpg
Tile-done-and-grout-underway.jpg
Starting-to-look-like-a-floor.jpg
Starting-to-figure-out-the-plumbing-chase.jpg
Lots-of-cut-and-adjustments-later....jpg
Closing-in-the-corner.jpg
Chase-done-and-baseboard-door-trim-installed-(toilet-install-is-another-BB-I-ll-be-submitting-later).jpg

I hereby certify this for 2.5 oddball points!

I save a lot of seeds, and acquire more by swapping, gifting, wild gathering, and buying. I want to know which of them are still usable (some are up to 10 years old but are well stored and may still be good). I don't do a full scale germ test of everything every year, but I am currently doing so because things had got out of hand :)

I use various flat plastic containers from kitchen stock or recycling, rather than ziploc bags as often recommended, because they are much easier to repeatedly open and close and see which seeds have germinated and which not.

Time and expertise: this is a pretty straightforward process and most people would not be doing hundreds of lots like I'm doing.

For one batch of say 40 varieties, once you have a system set up,  it takes about an hour to set up the test equipment, label, moisten, count out seeds etc. Then 3 or 4 times during the 2 weeks or so I'm running that batch, I will check everything and record germ rates at that point, maybe 10 minutes each time. At the end of the test I go through everything, record germ rates on the seed packets, re-store good seeds and reject the no good ones (actually they become cover crop seeds), about half an hour. So, 2 hours to do a batch of tests.

I hereby certify this for 2 oddball points, and now you are the proud owner of the air oddball badge!

posted 1 month ago
I submit trimming a door to fit a new, higher floor.  I had the door removed to install tile but when I tried to reinstall it, it was hitting the floor.  So I cut off about 7/8" to allow for a rug on the finished floor.
New-tile-is-about-1-higher-than-the-door-was-used-to.jpg
Getting-ready-to-cut.jpg
Cut-off.jpg
Installed-and-it-clears-the-rug-.jpg

I certify this 1/2 oddball points!

posted 1 month ago
So this seems like an oddball bb, but it has certain overlap with roundwood building, homesteading, and community. Let me know if there’s another place this ought to go.

Our early 1900’s root cellar has been a dilapidated animal habitat since the 60’s. I organized a work day with my coworkers to come out and help clean it up. We scared out the vermin, removed old brooder boxes, equipment, and mason jars for sorting, cleaned out debris.

Then I built a new roof from Easteren Red Cedar logs for the stairwell to keep rain out.

For the time being, I’ve secured the roof with corrugated plastic sheathing. Still to do is:
1) permanent back hatch roofing
2) entry door
3) intermediate partition wall and door
4) shelving 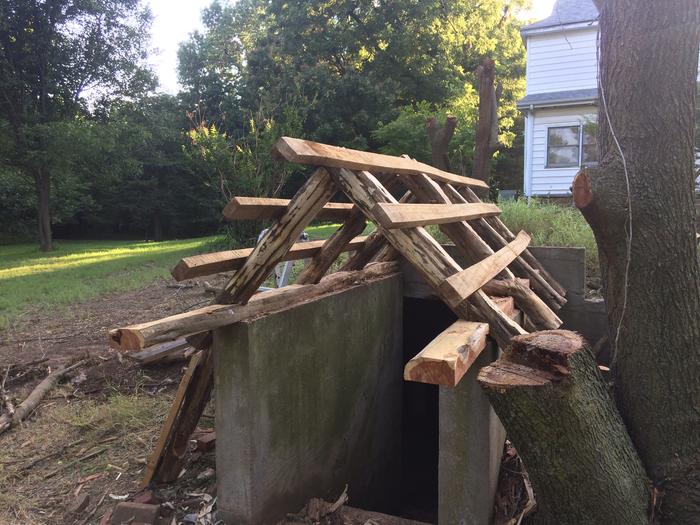 Much debate among certifiers. Points for roundwood work, points for "get er done", negative points for plastic roof. Final score is 7.5 oddball points.

posted 1 month ago
I'd say it's up to you Beau.  I'd say either here in the Oddball badge is fine, or in the Homesteading Oddball thread.

Oddball is scored for the time it would take a pro to do it with a bit of luck.

Homesteading Oddball is scored for the time it would take a talented newbie to do it.  IE more points

posted 1 month ago
Personally, I would have thought you'd have something like this in "Tool Care", as the reason I had to make it was that Hubby kept loosing part of the set! So the goal was to make a pocketed, roll-up, wrench holder. It had to be artificial fabric to decrease the risk of mold. (Leather would have been awesome, but it wouldn't cope with Hubby in our climate!)
wrench-holder-pattern-and-cutting.JPG
Fitting-the-pockets-to-the-size-of-wrench.JPG
Finished-wrench-holder-rolled-up.JPG

I certify this for 1/2 oddball point. Leather, canvas or some oiled fabric may have generated a higher score but the customer gets what the customer wants!