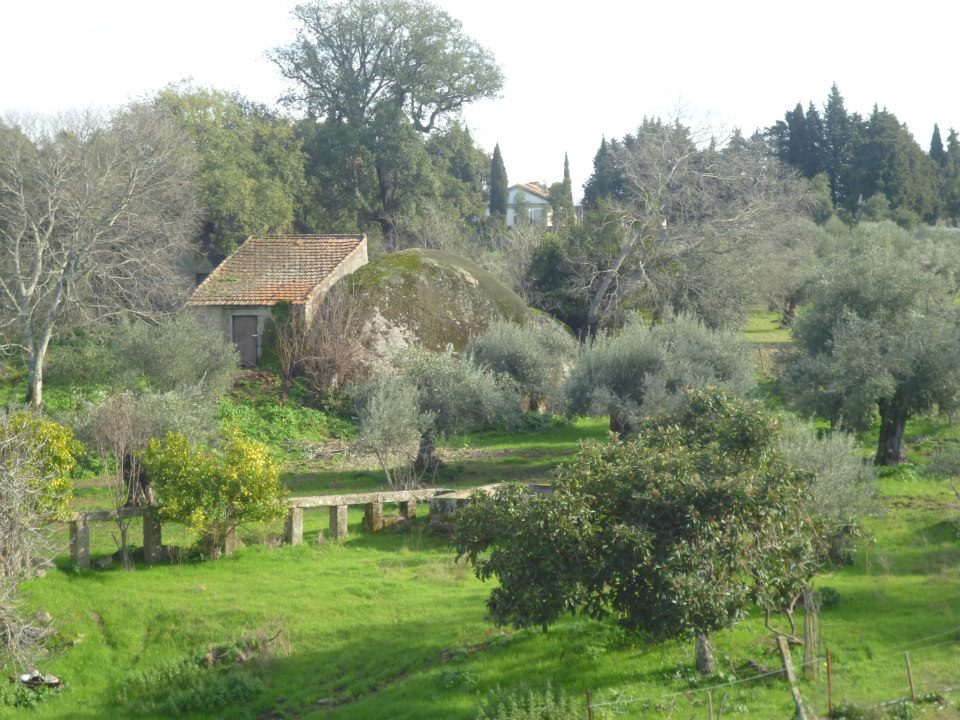 Yep. That is one hell of a rock! I assume it is an erratic? We get them in Galicia but only in really inconvenient places...

posted 1 year ago
Burra Maluca where's that lovely tiny house with the big rock? Is it possible to live in it (maybe to stay there during a holiday)?

posted 1 year ago
Loved all the pictures and ideas.

I am looking for more uses for river rock. Unfortunately, this kind is the only one we have around here.

A few weeks ago we had rain that didn’t stop for two days straight, so the creeks flooded more than I’ve seen it in 10 years. The kind that changes the creek bed. So it deposited a bunch of rock in one spot, and I would love to put some of it to good use.

In my mind though, the problem with using rock in our climate - Pacific North West- is that if you leave anything on the ground, it will be covered by grass in one season. I lost t-posts that way☺️.

posted 1 year ago
Do you have a pic of the bedroom rock? I wanna see!!!

Liv Smith wrote:Loved all the pictures and ideas.

I am looking for more uses for river rock. Unfortunately, this kind is the only one we have around here.
In my mind though, the problem with using rock in our climate - Pacific North West- is that if you leave anything on the ground, it will be covered by grass in one season. I lost t-posts that way☺️.


Besides the dirt wall covering pictured earlier I have a path where I laid out the larger round stones first and tamped them down into the mud after the grade was bulldozed. then I tamped smaller stones in the spaces in between. Occasional grass comes up and last week a crocus that got buried in the process bloomed. but overall the path has been stable and dry to walk on for repeated winters. There is still a heap of rocks beside the wall that need to be tamped in to extend the path and it has remained grass free but some tall growing plants have come through like columbine.

posted 1 month ago
I use rocks in the strawberry patch to prevent the plants from getting washed away in rain storms. It works really well and they get more benefit from the slowed down water and have earlier growth im assuming from the thermal battery of the rocks.
Ken Newman
Posts: 17
Location: Montrose, United States
13
I like...

posted 1 month ago
Well there was this "BIG" one when we were putting in the pond that just called out to be a diving rock....or an excellent casting point when fishing...and the heron seems to really like it when he's not skulking in the shallows....now and then ( if the water gets high enough ) even the turtles find their way onto it for some sun. All in all it's turned out to be a very useful rock.
g4-72-copy.jpg
Scott Stiller
pollinator
Posts: 486
Location: North Carolina zone 7
66
posted 1 month ago
A very small herb spiral I made.
54BB29B2-C959-4B38-81FD-BE1FC9E11225.jpeg 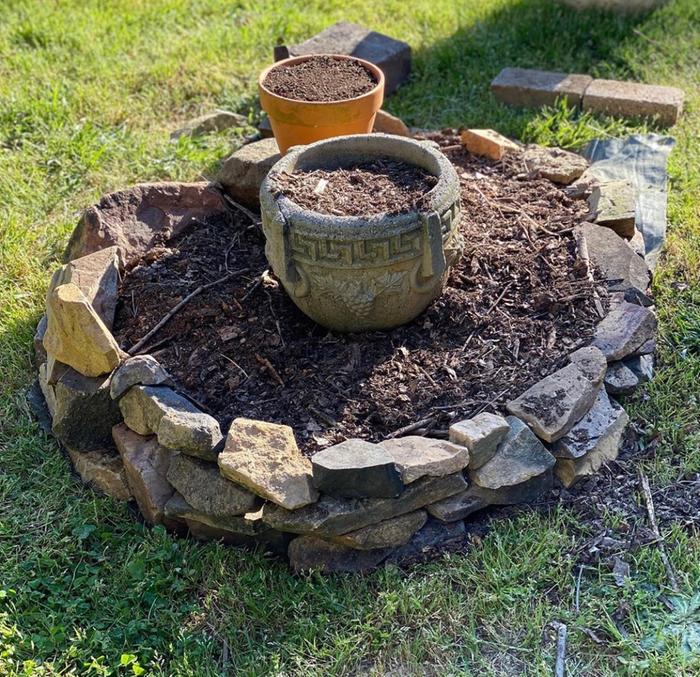 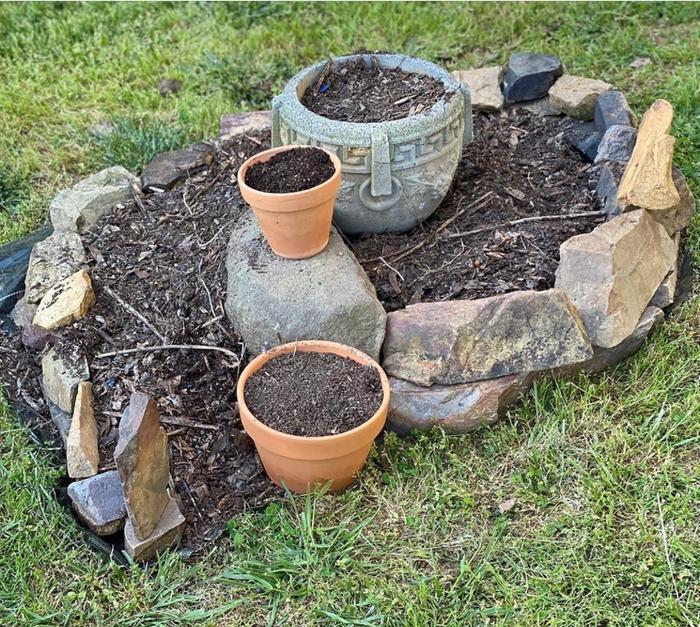 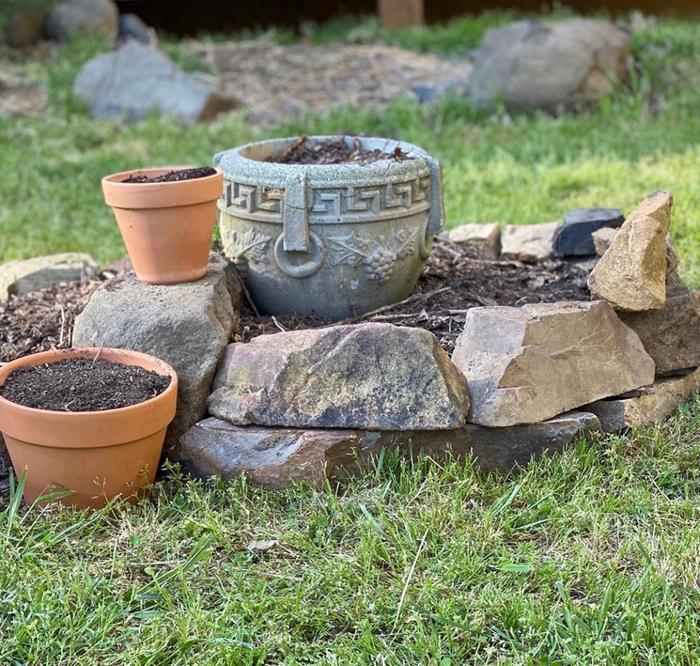 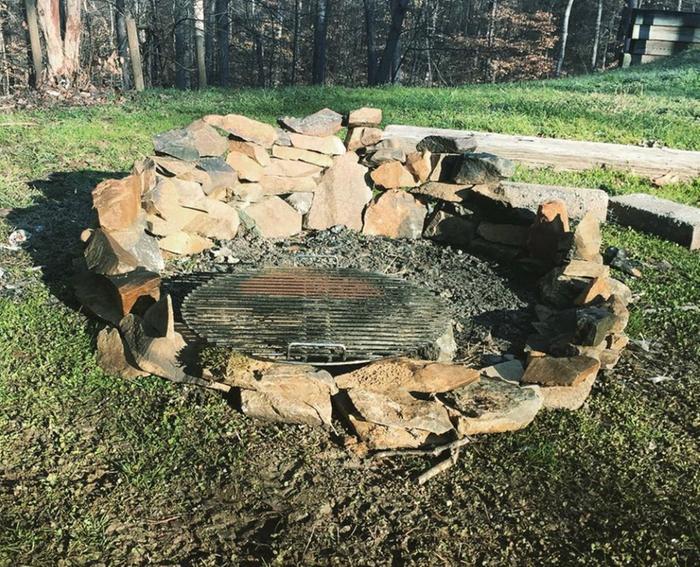 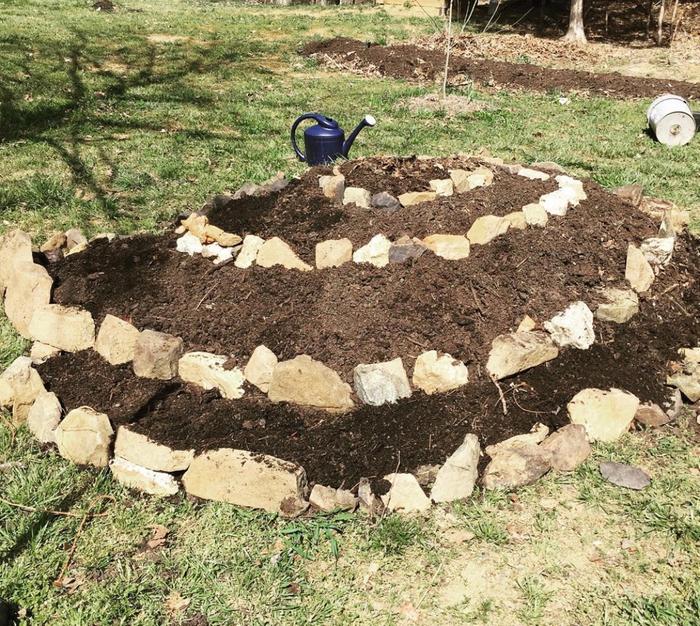 posted 1 month ago
We've been digging a new sunken bed in our garden area alongside the pre-existing greywater bed (where the tires are; the white PVC pipes are part of the greywater filtration system), mesquite nurse tree (surrounded by Lyceum pallidum transplants that you can't see in the shadow of our relocated shade structure), and herb bed (surrounding a buried irrigation olla). To keep the edges of the herb bed and part of the greywater bed from crumbling into the new bed while we work to fill it with mulch, I shored them up with rocks from our archery meadow. I like it so much that I may have to figure out a way to keep the rocks showing once the new bed is mulched! Turns out I kinda like stacking rocks.

The rest of you have such lush herb spirals and... what? Green grass?! Here in the desert we're immensely proud of and grateful for whatever is still green -- especially the edible weeds we encourage -- as we enter the hot, dry, windy late spring and early summer. A few well-placed rocks can definitely mean the difference between no surviving green and bits of surviving green here and there. That is, as long as we keep the rodents and ants at bay somehow! Everyone loves shelter.
IMG_0699.JPG

"Creativity is allowing yourself to make mistakes; art is knowing which ones to keep." - cartoonist Scott Adams, "The Dilbert Principle" (1996)

Michael Love
Posts: 14
Location: Olney, Maryland
posted 1 month ago
Tracy's a rock star. I am coming to this party 3 some years after posted but it came in my email feed. I use stone for many things around my garden and yard. I use stones dug up from the soil as draining in potting containers. I also have a fieldstone path from my patio to my composting area. Recently put down river stone over an area where I used to have shrubs just as a place holder next to the garage I may get some livestock water tanks and do some container gardening in these. Also have some nice 2' X 2' red filed stone pavers that I am thinking about where I may need a new path or mud free work area. I have photos that I attached as files but I need to figure out a new photo app for image sharing.

posted 1 month ago
We live on gravel. Every shovelful brings up fist sized, and larger, round rocks. I am told that when the glacier dams near Missoula broke, as they did frequently, huge walls of water would roll rocks up  over and between our mountains. Anyway, like I said, they are round and look like river rock. And as someone pointed out above, we get a fresh crop every spring.

Initially, as we were building, we piled them up between pine trees next to the driveway. Later we put them in cylindar shaped wire cages, ran two by fours between them for fencing along the upper edge of the roof garden. (My girlfriend was sure that I would fall off the edge.) Lots of people here build these fences. And then we built a rock cylinder to mount the mailbox. I used several to line a rain ditch from the garage gutter down to where I had planted a maple tree.

Each generation has its own rendezvous with the land... by choice or by default we will carve out a land legacy for our heirs. (Stewart Udall)

S. Bard
pollinator
Posts: 189
Location: Italian Alps, Zone 8
81
posted 1 month ago
I love rocks! We have lots of them here and building walls and houses with them is part of the traditional landscape, although it has been slightly forgotten over the last decades.
Our garden is filled with rocks and we have stone wall terraces that are in need of reconstruction, so we’d love to learn how to build with them. The original part of our watermill is still a stone construction, made from the rocks they pulled from the rock cliff the house is built against.
I had already made a simple flower bed out of a pile of large boulders, but that consisted mostly out of removing rocks and replacing it with soil.
However we were very fortunate to participate in a communal course where the locals of our village could participate in restoring a storm damaged dry stack wall in exchange for learning the techniques while doing it (and drinking wine and eating sandwiches underneath the chestnut trees! Ah what a lovely day it was!). It was such a great learning experience, and I’m eager to apply our newly learned skills to our damaged dry stacked stone walls lining our terraces.
19D71422-62E7-4E87-9726-3CE058586053.jpeg
52AE13F5-3A22-486B-A0C8-3A1916158C6D.jpeg
4A7E4983-919E-495A-9106-A34A8BC3D3A8.jpeg 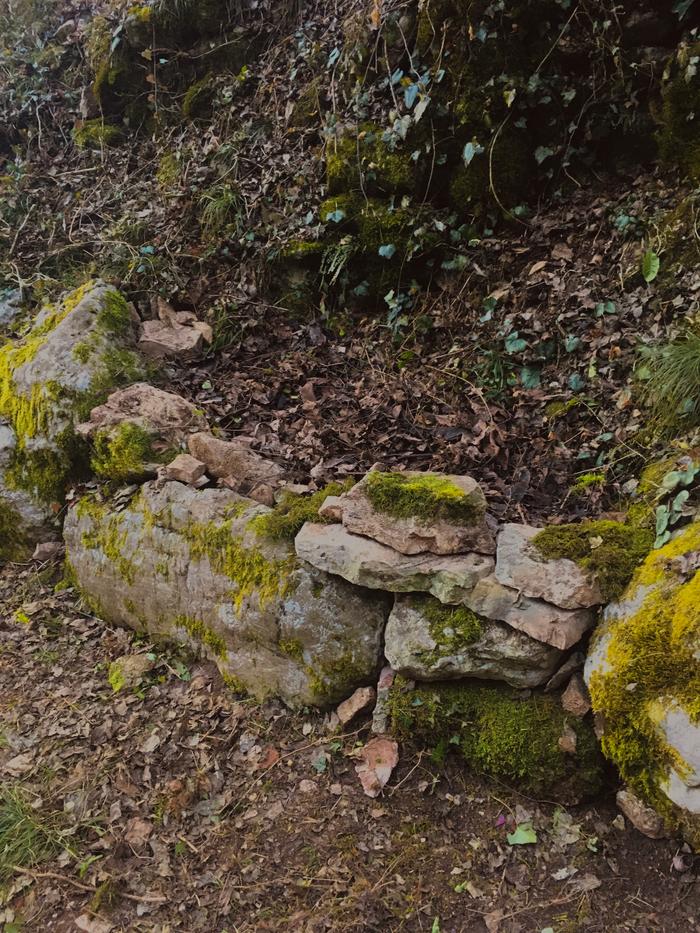 posted 1 month ago
We're still settling in to our new farm, which nestles on the foothills of the Gardunhas in Portugal. I thought I should share this photo of the terrace walls with you all.

The rock here is volcanic, I think consolidated volcanic ash known as tuff. It's relatively soft and can be worked fairly easily with hand tools. The hillside behind the house is terraced, and it seems that some terraces are cut out whilst others are constructed using the blocks of stone cut that were cut out of higher terraces.  The very top terrace here is ours. It's difficult to make out the scale, but they are full sized olive trees which you can stand underneath. The lower terraces belong to a neighbour, and we also own the terraces further down the slope, not in this photo, around the house.