Frugal or just being smug...have you scored a real deal recently?

posted 2 years ago
One last comment on that fabric: made a curtain for a VERY drafty north window in my bedroom at the rental, it blocks it perfectly! Houston, we have a winner!! :D  The insulated drapes for our house will be made of this. I washed it in hot water, and it toned the pink down a hair, it's a bit tanner than it was. 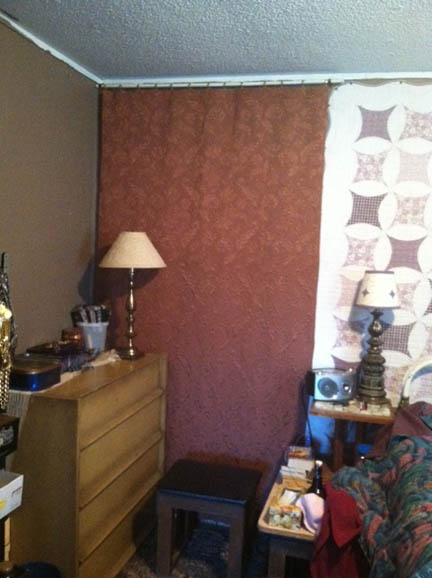 D Nikolls
pollinator
Posts: 1682
Location: Victoria BC
253
posted 2 years ago
I bought a construction staircase months ago off craigslist. Turned out the guy was just down the road. We talked a bit, I admired the very classy reno he had done to an old A-frame, and he thought my new farm sounded pretty cool.

No contact since, until a week ago he texted me to offer me some shed roof trusses. Free. Don't have to offer me free materials twice!

posted 2 years ago
I thought of this one as we just got hammered with a storm.

We got 20 inches of snow, blowing 35 mph with temps at 0 degrees (f) and no, that is NOT windchill. Fearful we would be without power, I had the tractor hooked up to a generator I was given by some friends; a 20 KW PTO generator for a tractor. I changed the gear oil and painted it, but it works fine.

As for the storm, we faired well. No need for the generator as of yet anyway. Just a lot of snow.

posted 2 years ago
Well, I wouldn't call this lately, but when I was stationed in O`ahu, I visited neighbor island Lana`i, and on the beach, I found a plastic bin, 18" x 24" x 6", worn by the sea and with what appears to be Japanese writing on it. I don't know what it would have cost to buy a comparable bin, but free is definitely a good bargain. And this was before that Fukushima disaster, so no worries there.

The beach is my thrift store. I find all sorts of useful items on beaches.

posted 1 year ago
In town, there's a spot people can drop off yard waste for free. I go there to scavenge for mulch :)

People are always throwing out plants too, so sometimes I luck out. This weekend I got 7 big yuccas, couple armfuls of hens and chicks, and a few dozen strawberry plants. I also got a few mystery plants - some kind of flowering perennial maybe. The tops had pretty much died but  the roots are fat so I'm hoping it'll recover.

My husband wanted to bring home some potted cedars that were there, but I reminded him of how much water he'd need to haul until they got established and he changed his mind.

Last fall I got two big clumps of the most beautiful hostas I've ever seen. One of the clumps came with some daylilies.

It's my favourite place to shop.
Mike Haasl
steward

posted 1 year ago
I was volunteering at the food pantry in town and picked up a bunch of seedlings that were donated from a local nursery for customers and volunteers.  I went home with about 60 cabbage and 80 broccoli starts.  Plus peppermint, tarragon, kohlrabi and a few other oddities.  Now all the holes in the garden are filled with new things

posted 1 year ago
An update on the limoncello project from eight months ago when I got a great deal on citrons:


Dan Boone wrote:Seven "Buddha Hand" citron fruits in the clearance produce bin at my local supermart for $.59 each -- these are usually  six or seven dollars each.   (They are grown in Asia and on a very few acres in California from what I understand.)

They are a very aromatic citrus that has no juice or pulp -- they are all about the pith and skin.  I chopped up two of them (filled a quart mason jar) and covered with vodka as the beginning part of the recipe for making a traditional bottle of limoncello.

I just discovered this mason jar where I shoved it in my backup fridge, the messy one that has old fruit I need to tear apart for seeds and moldy bags of things that are being cold-stratified.  I strained off the vodka and it had taken on a wonderful flavor, perfume-y but not in a bad way, with a nice clear golden color.  I put it in a nice booze bottle with a cup of sugar and a bit of filtered water.  Once the sugar is completely dissolved (I could have used simple syrup but I'm lazy and this works) I'll top up the bottle with vodka and start drinking it.  It won't last long, it's too good!

posted 1 year ago
Not exactly permie based, but we stopped at a tile warehouse to ask if we could buy his stacks of pallets. He said we could have them as he was retired and not really trading any more. Hmmmm. What is he going to do with all those tap and shower samples. Sell them at cost. Done! Shame he isn't still in business because we LOVE those floor tiles..... he can get them for 10 euros a square metre (about 10 sq ft) .....instead of the 28 euros at the store in town. Done! A saving of nearly 2000 euros. No taxes to pay because he is retired.  Would we like to come back if we need more...Eeerrrrrrr....still got upstairs to tile!

posted 5 months ago
I learned of a household/garage sale kinda late on a Sunday morning, and drove about 15 minutes from my place to the address. The place was a homestead where the patriarch had passed away, and one of his sons was selling an enormous range of large & small things from the house and outbuildings before the property itself would sell — object being to comfortably relocate his mother.

As well as a cultivator of small fields, the dad had obviously been a mechanic & handyman. There was an unbelievable amount of tools, equipment & parts in his main garage, virtually all coated with an oily patina including rust & dust. I’d been looking for more than a year for some sort of anvil, and I spotted this modest-size one in great condition. Top surface including the horn is a bit shy of 12”  & the weight is around 20 lbs. I decided my shrewd offer would be $15 (which would’ve been a steal, as regional anvil pricing tends to be several dollars per pound). But the son selling stuff said “how does $5 sound?” !!  I was a lucky latecomer to that sale.

After bringing it home, I used a rust buster spray, then a wire brush on an angle grinder to clean it up. I made a mounting plate from plate steel, clamped the anvil & plate to the top of a piece of I-beam. I've set that atop a stand I made from scrap wood.

(I'm happy to revive this thread that reflects an integral institution of rural living.) 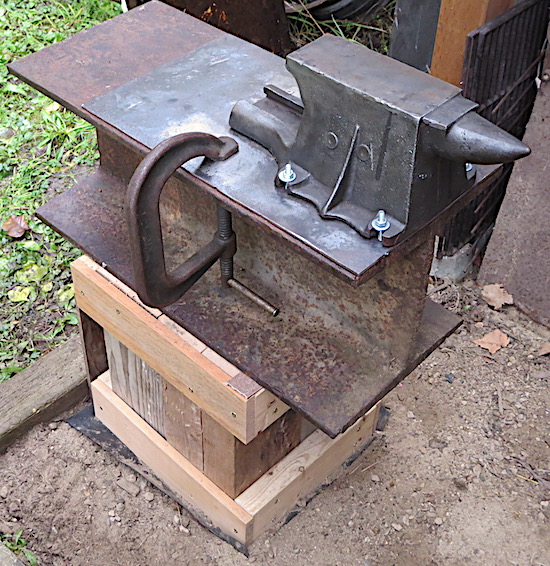