It is a privilege to live, work and play in the traditional territory of the Salish People.
Better wood heat! -- 177 Hours of PDC and ATC! -- Free Heat Movie! Share the Movie
All about Permies, including Tutorials -- Raven Trust

dawn west
Posts: 53
Location: PNW zone 8b
62
posted 2 years ago
Approved submission
Joining in with the 22 Days of PEP! I made Lentil soup/stew/daal. This is the only way my husband will eat lentils and it took me almost 38 years to find.  The recipe changes every time I make it but the basics remain the same:
1 head of garlic (homegrown); 2 onions; some extra ground beef; chicken feet broth(homemade); beef broth(homemade); frozen whole tomatoes(home grown); 2 cups of lentils; water to cover; curry powder and hot pepper flakes. I did not use the canned chilies.  Cook for 45 min.  I made naan bread to go with the lentils. This is my first attempt at a BB in Food.

posted 2 years ago
Approved submission
Perry's at it again! Purple platypus getting all the PEP BBs! 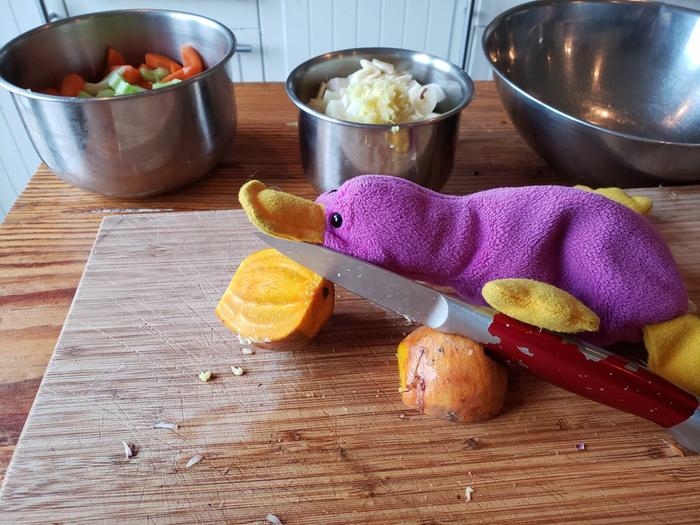 Plenty of produce for Perry! 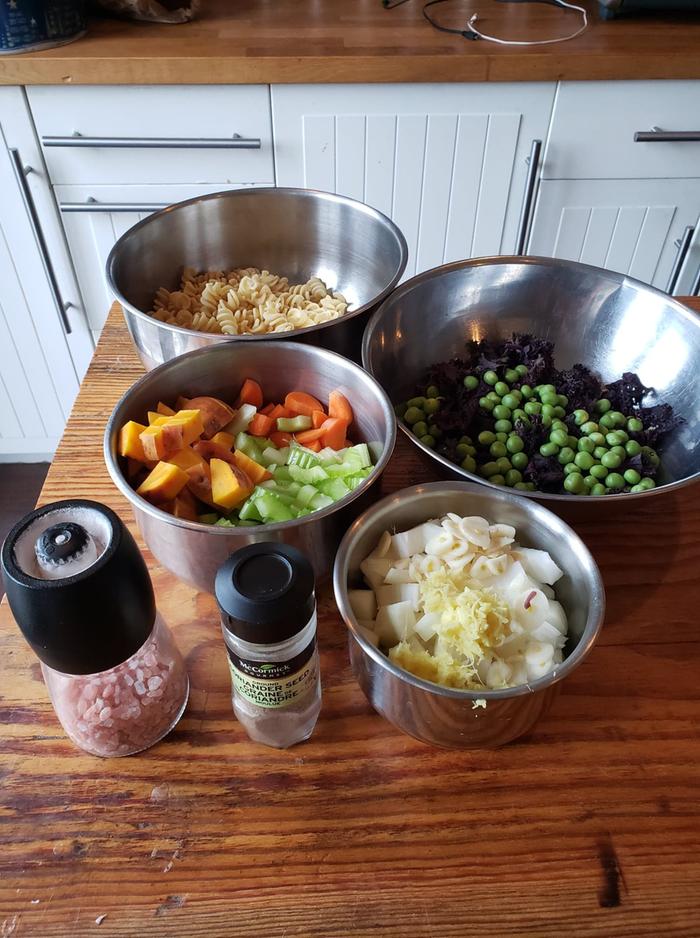 Chicken broth, from roast chicken carcass. Raised the bird myself! :) 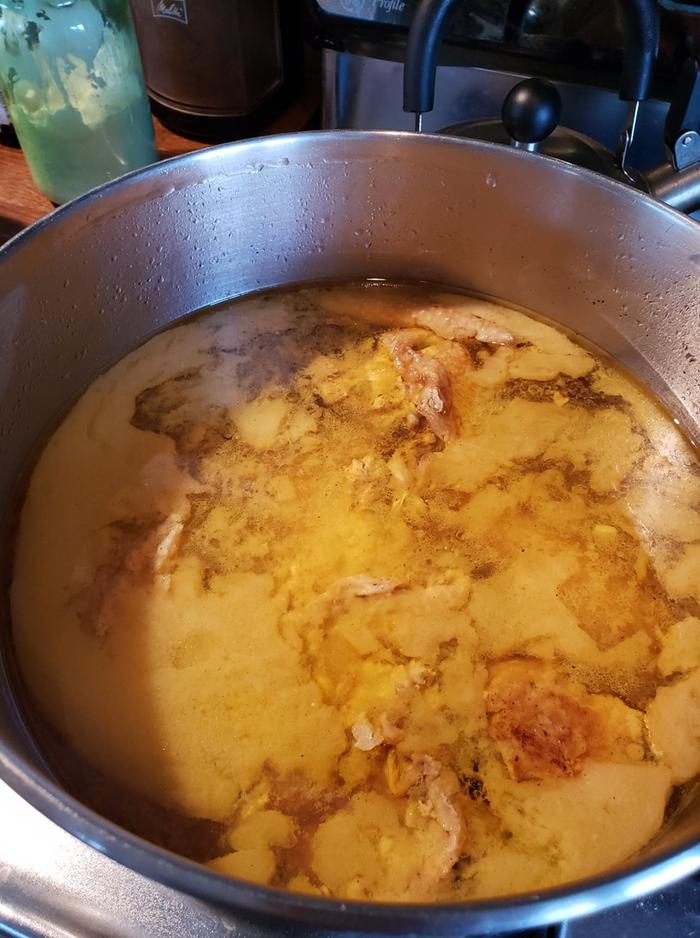 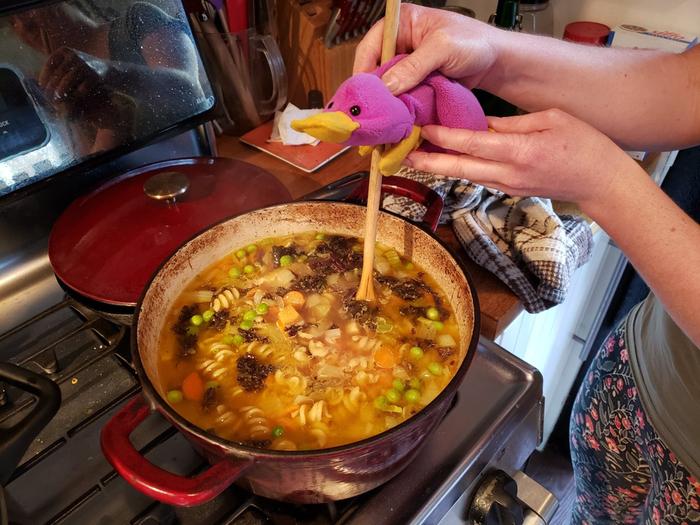 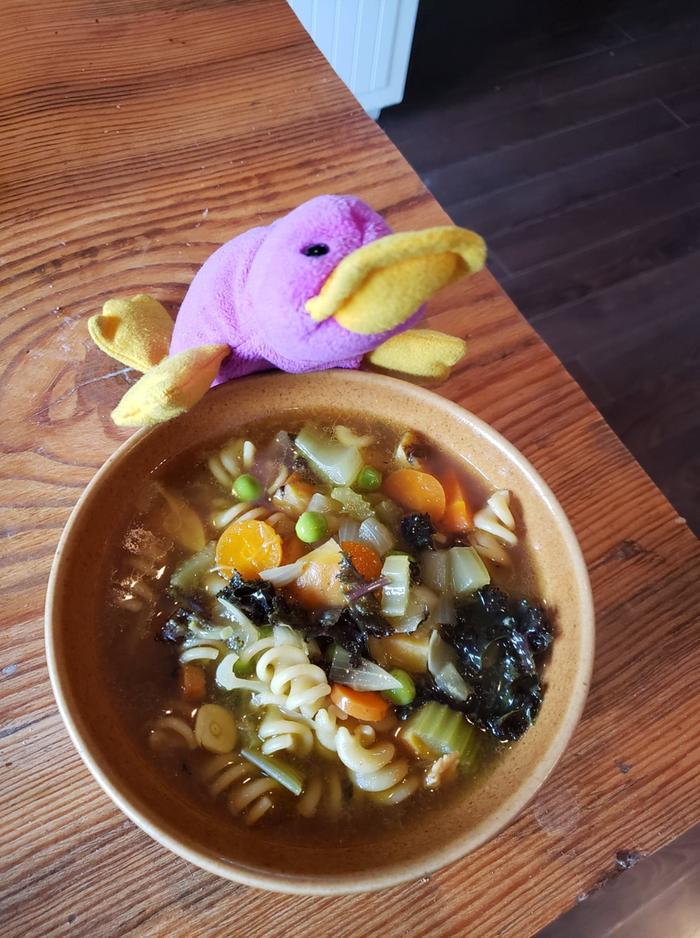 Like my shiny badges? Want your own? Check out Skills to Inherit Property!

posted 2 years ago
Approved submission
Chicken soup. I do mine a little differently every time, today, it's:

(All finely chopped unless noted otherwise. Measurements are either rough or very rough.)

Bacon and butter into the pot first, until bacon crispy. Chicken (salted and peppered) in next, until the breasts are mostly cooked. Out come the chicken breasts, in go the vegetables. Chicken breasts get chopped up, then back in.

Now I started adding some boiling water, little pours at a time, until it's soupy enough. Next quinoa and some thyme and turmeric. Et voila!

Toss it all in the crock pot on high for 5 Hours. At the end, pull out the bay leaf and pork skins. Use an immersion blender until it’s to the texture you want. Check seasonings; I usually add a bit of Tabasco at this point. Eat.

posted 2 years ago
Approved submission
Tonight I made beans and kale with sausage.  You'll be unsurprised to hear that the three main ingredients are beans, kale, and sausage. :)  There's also homemeade chicken stock, herbs from the garden (sage, oregano, parsley, and rosemary) onion, garlic, tomatoes from the garden, bacon fat, salt, pepper, and chipotle salsa.

The sausage and alums are browned in bacon fat, pan deglazed with stock, then the remaining non-green ingredients are added.   Simmer on low for 30 minutes then add the green things.  Simmer on low for thirty more minutes, then serve. 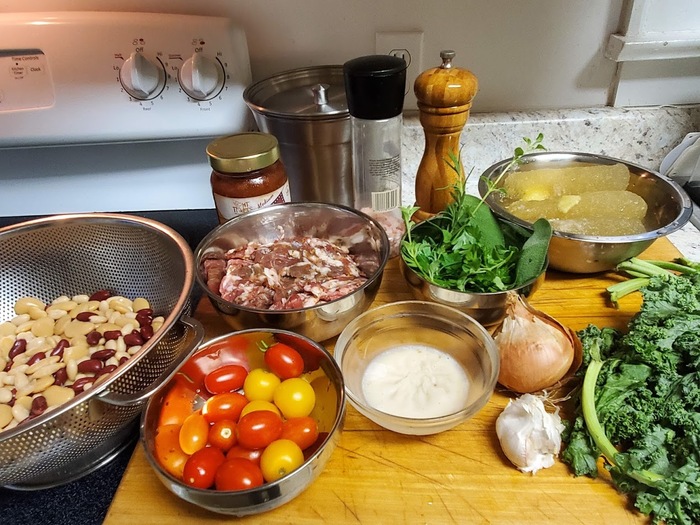 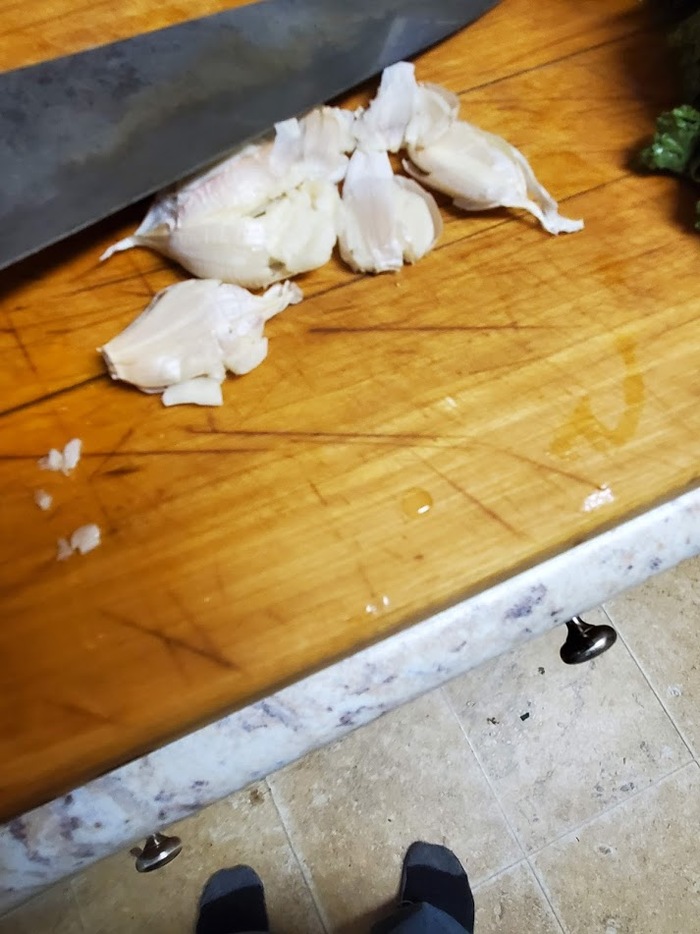 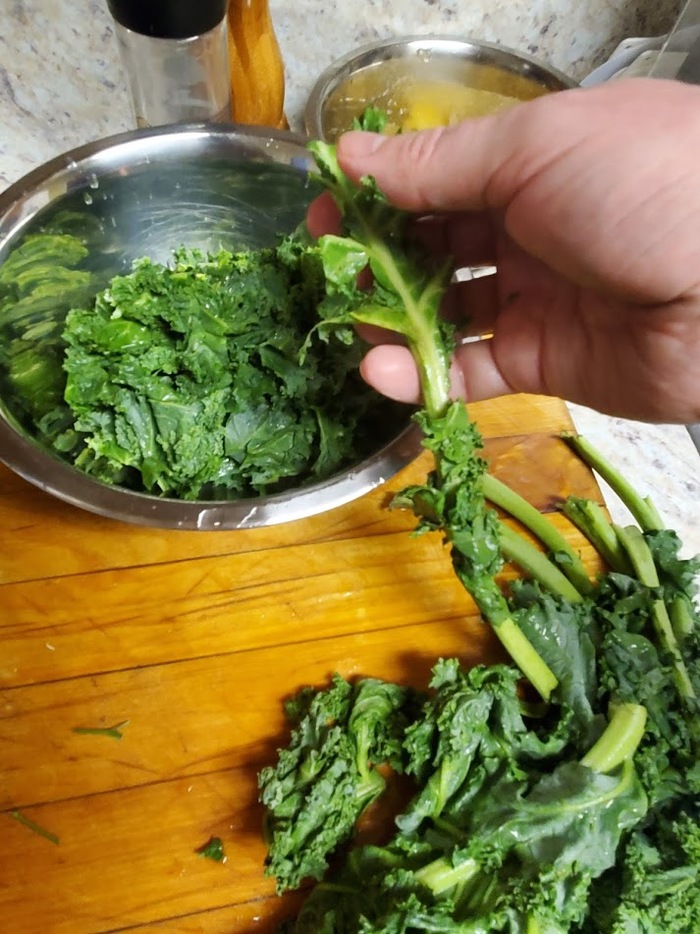 Ingredients in the pot: 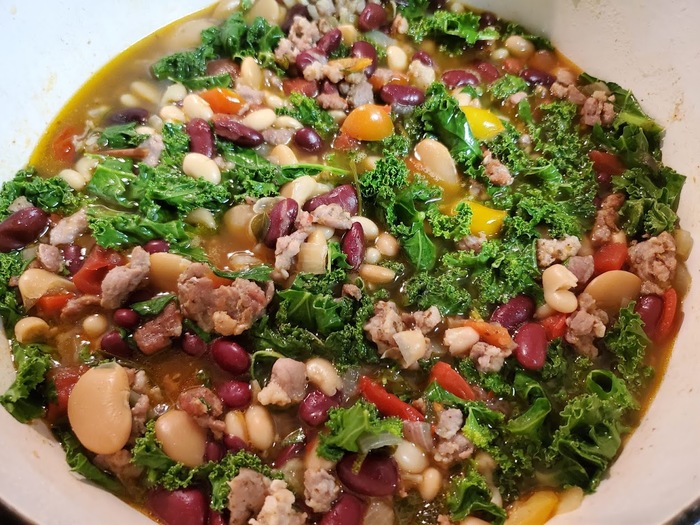 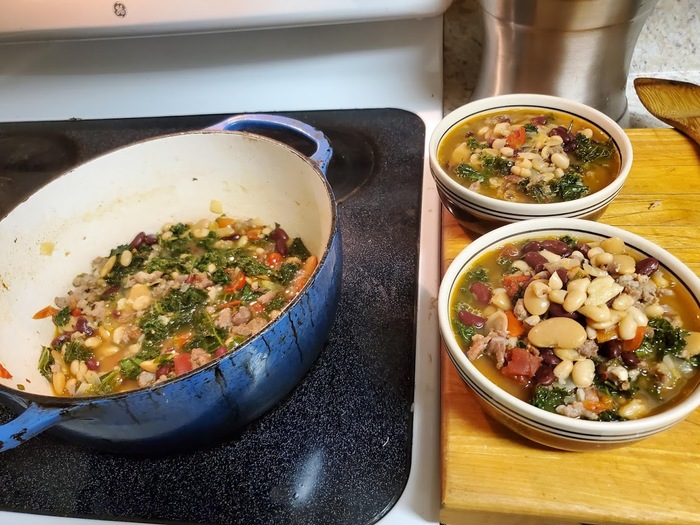 posted 2 years ago
Approved submission
Made soup 'from scratch'.
First I made a bone broth. A friend knows a hunter, who hunts wild geese (that's allowed here in the Netherlands, for certified hunters, because there are too many wild geese). My friend had the freezer overloaded with parts of geese, so gave me some. Those I used to make the broth. 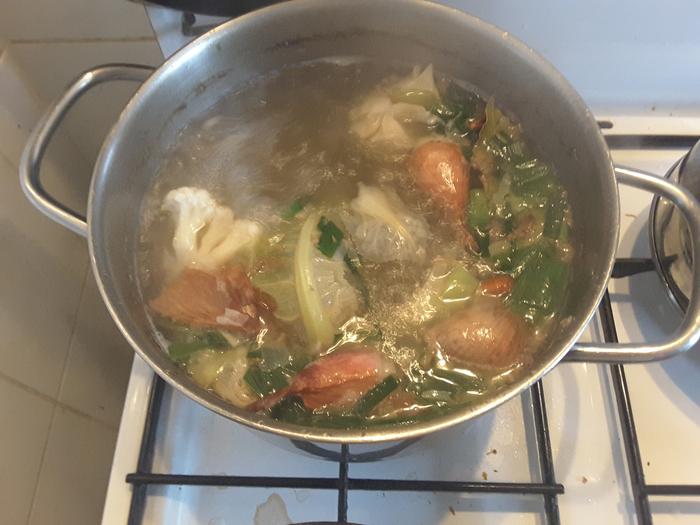 Bones simmering in water with some salt, vinegar, herbs and spices. 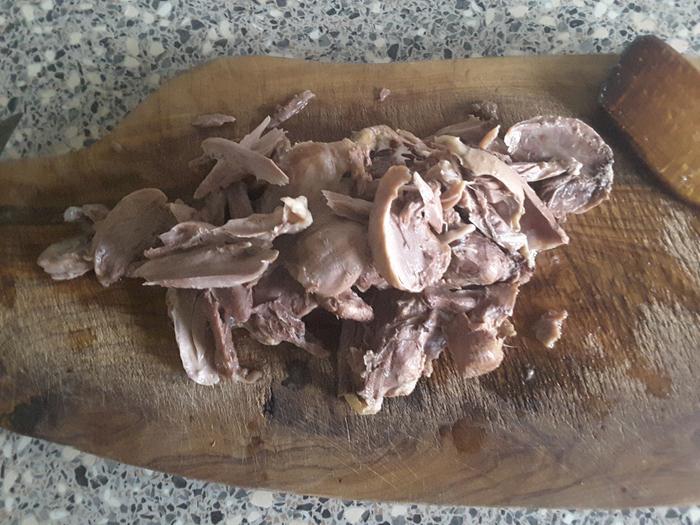 The flesh from the bones after cooking for some hours. I will use this in another dish, not in the soup. 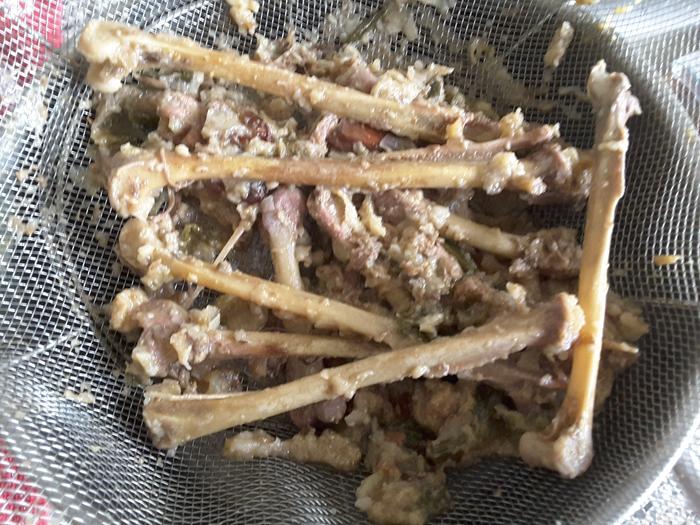 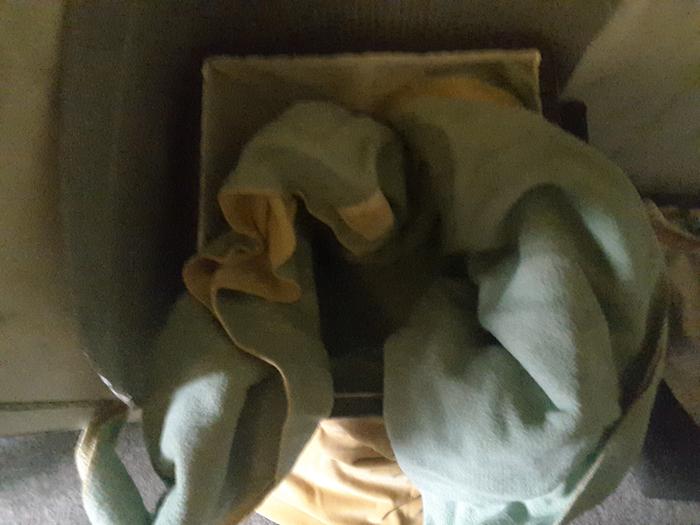 My 'hay box', there's no hay but a large old woolen blanket in it. 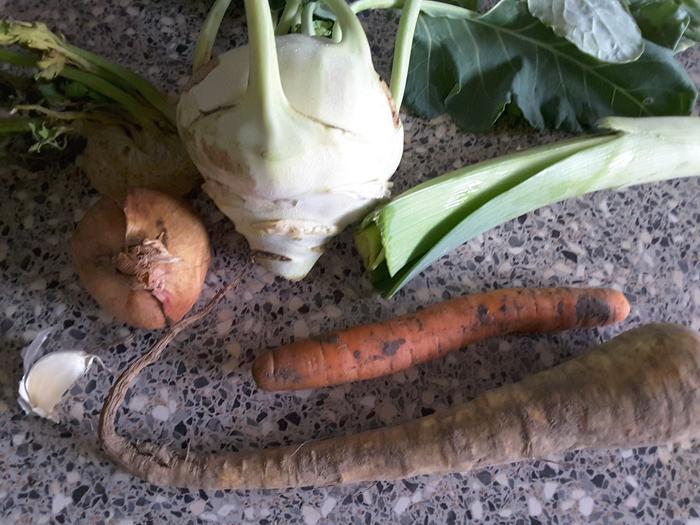 The vegetables that will go in the soup.
You can use any vegetable you like. 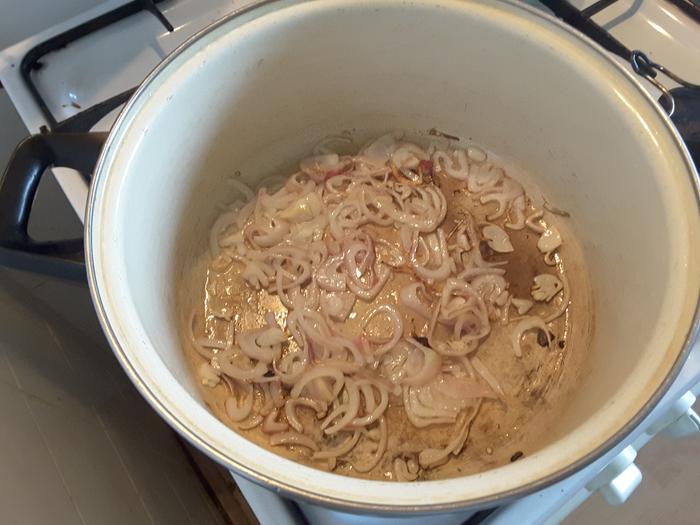 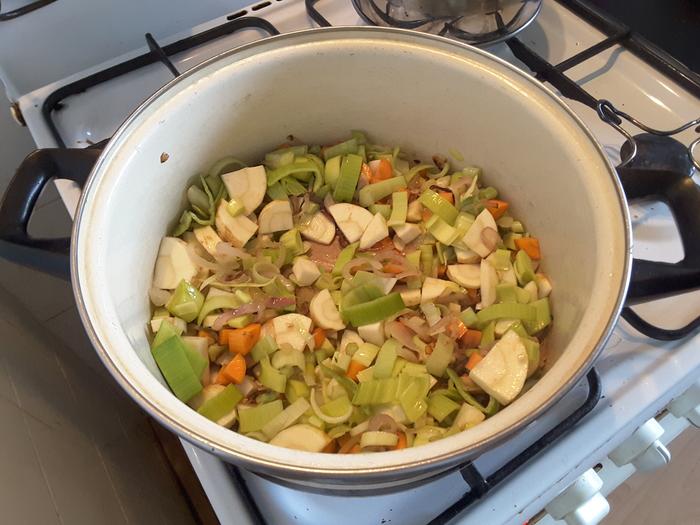 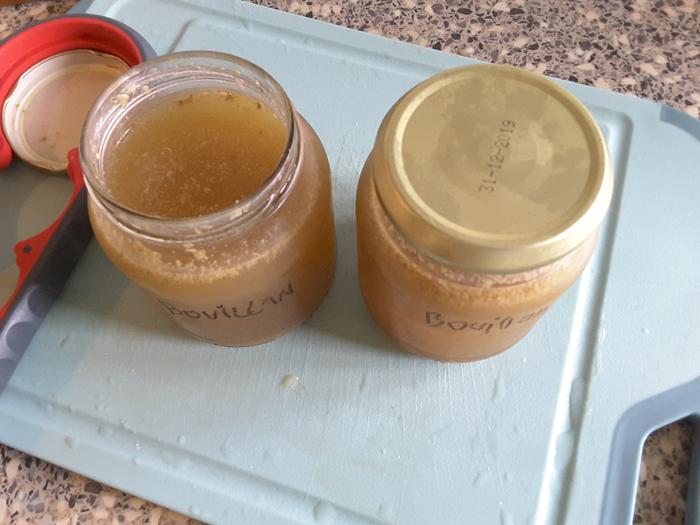 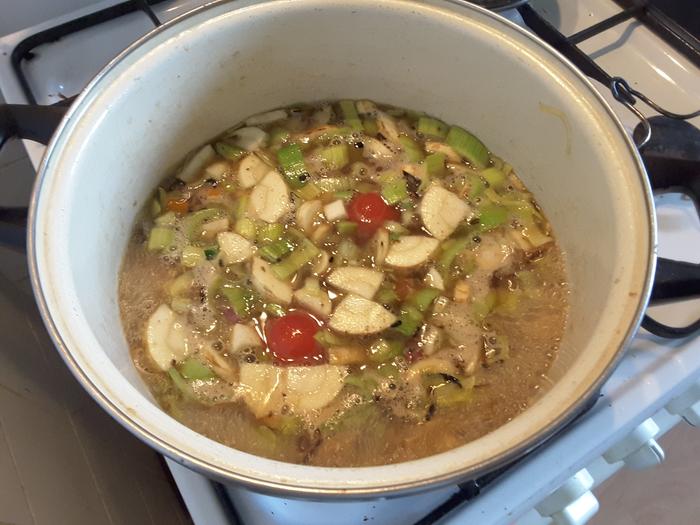 Brought to a boil. Then boiled it on the stove for about half an hour and then put it in the 'hay box'. 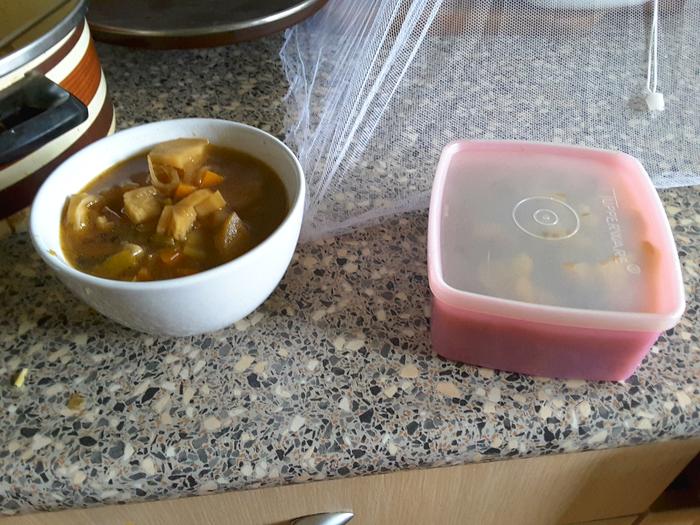 Two portions of soup. One for now, the other goes in the freezer for another day. (There was a little more left in the pot too).

posted 2 years ago
Approved submission
here is my stew
beef
potatoes
carrots
onion
celery
salt pepper garlic and beef stock
this time i also added some caned tomatoes for a change  i usually also use turnips but they are out of season at the moment
great with some fresh baked bread butter
IMG_20200915_172117.jpg 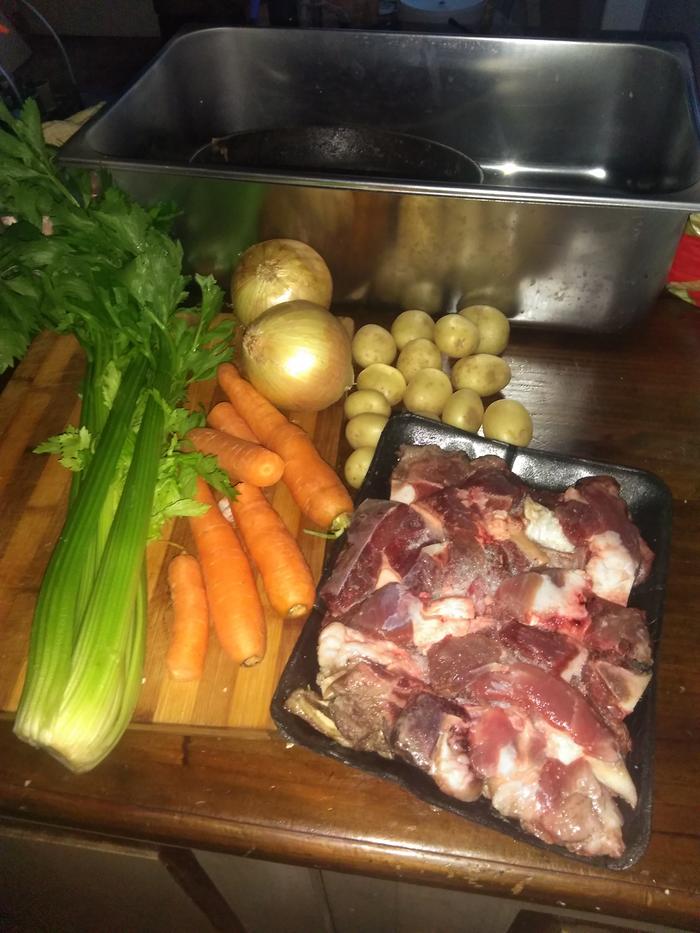 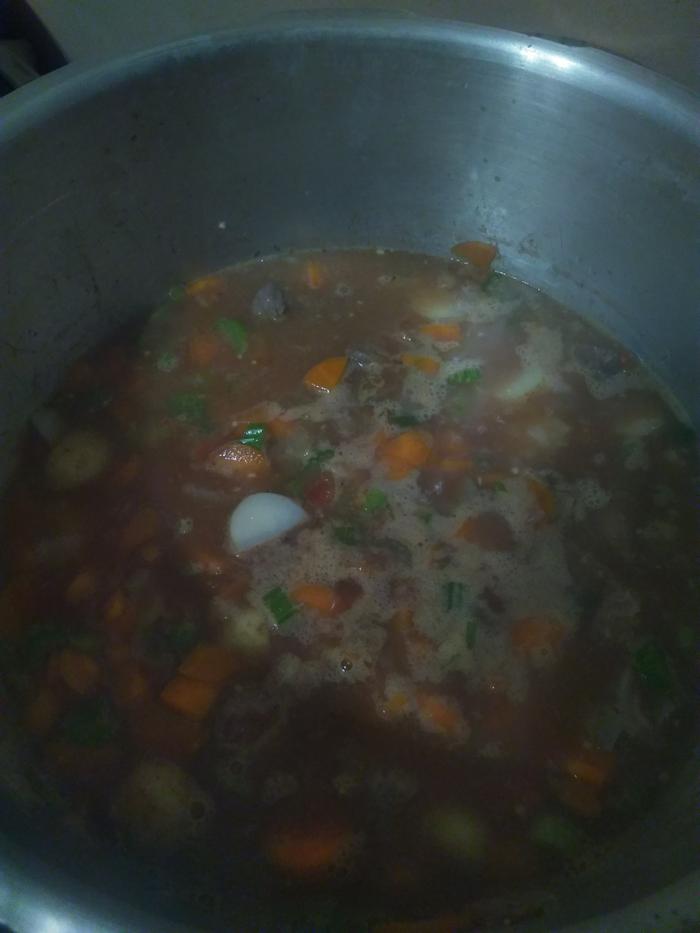 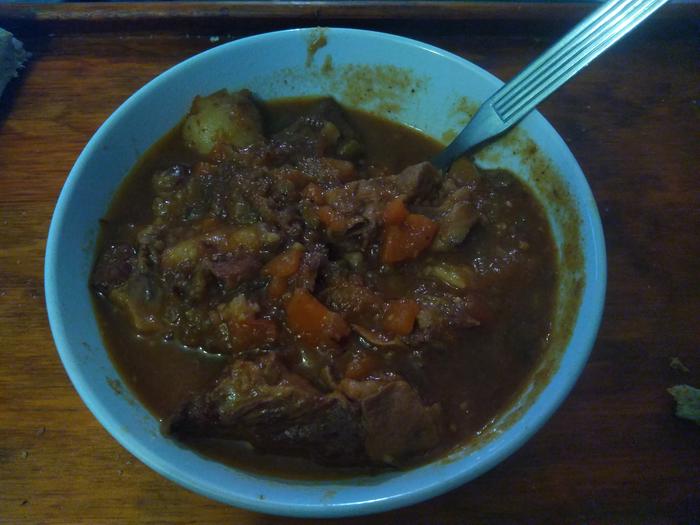