BB dimensional lumber woodworking - sand badge
posted 2 years ago
This is a badge bit (BB) that is part of the PEP curriculum.  Completing this BB is part of getting the sand badge in Dimensional Lumber Woodworking.

Sometimes things need to be put in their place.  Let's make a place for them.  Let's call it a box or crate. 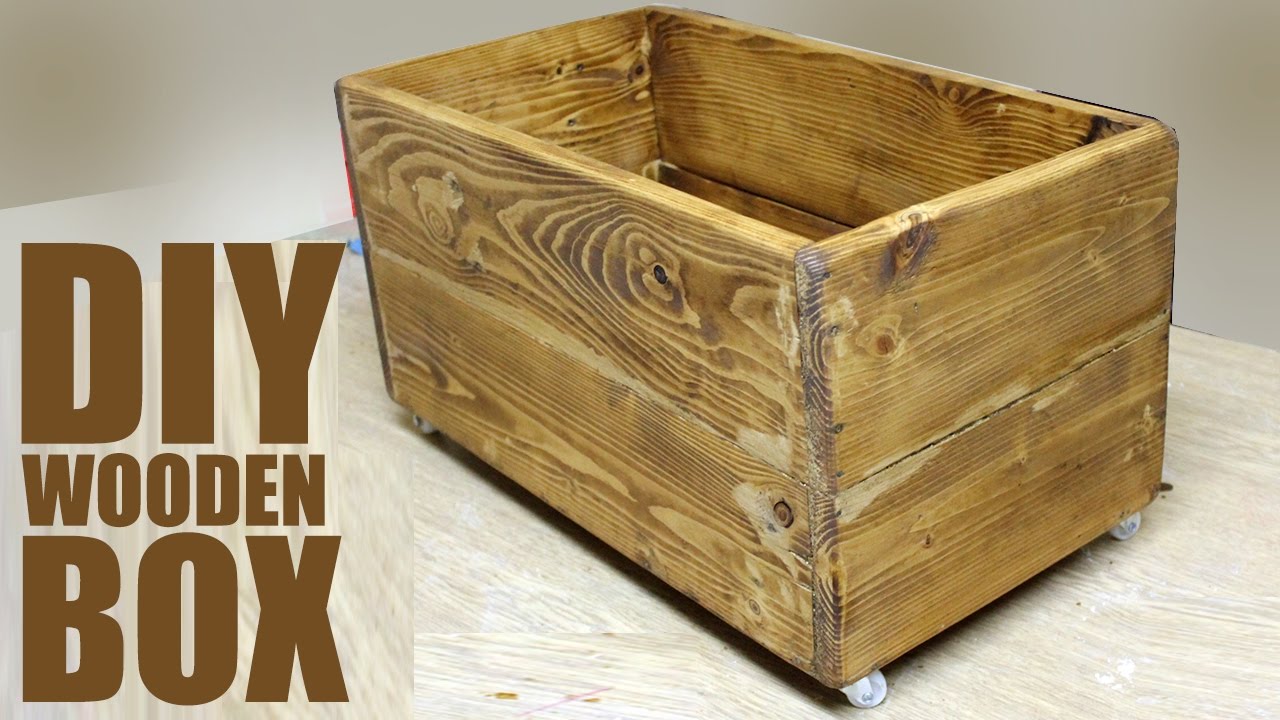 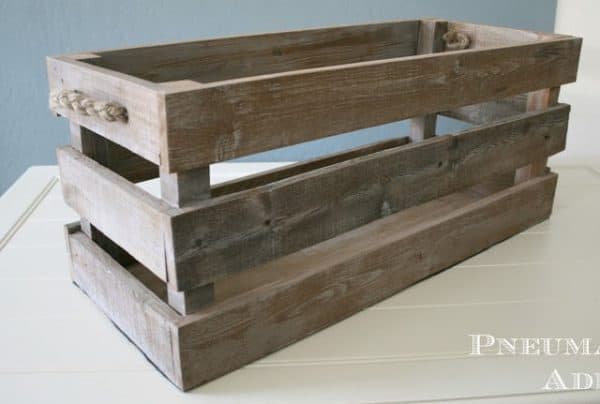 To complete this BB, the minimum requirements are:
- at least one cubic foot
- made from untreated wood free of glues
- no paint, stains or oils

Provide pics or video (less than two minutes long):
- the wood you're starting with
- the construction partially underway
- the finished crate/box
- description of why you made the crate/box the size you did and what it's for 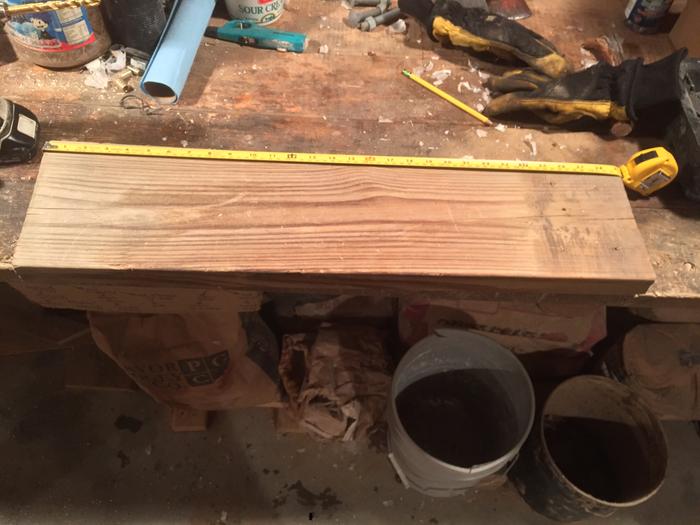 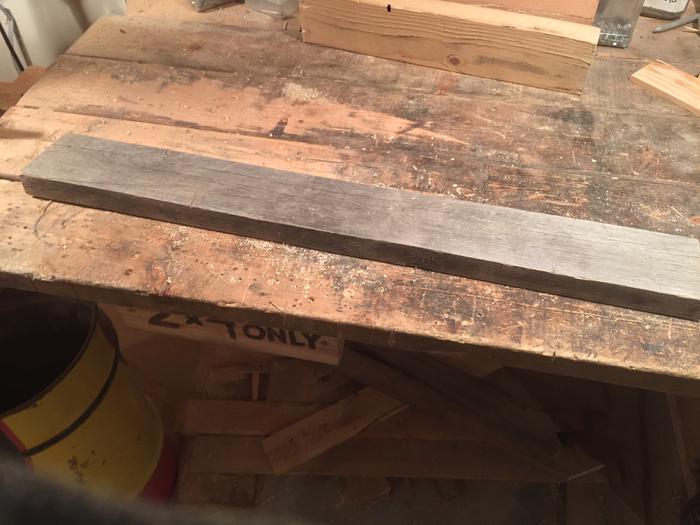 This is a progress picture. 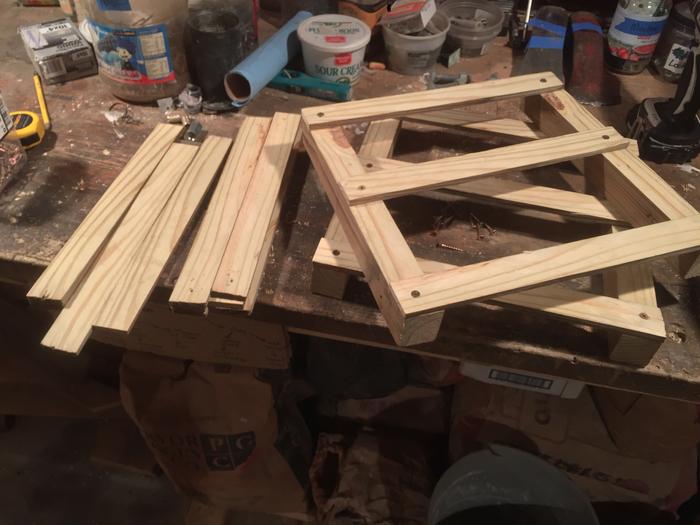 This is my completed crate. 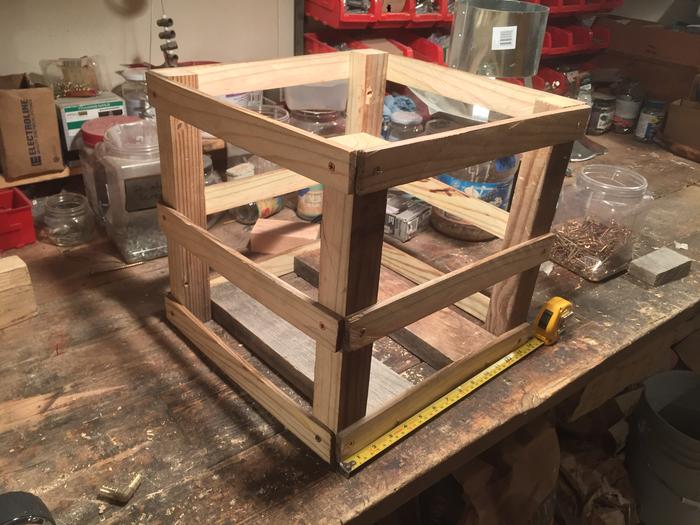 This is my completed crate fulfilling its intended function. I made this crate 14 inches cubed, because I wanted to use it for storing a bunch of wooden mallets. There were wooden mallets in the Shop lying around, which kind of bugged me, so, I made a crate to store them in. I did not need the crate to be huge, just large enough for the mallets that were cluttering the work space.
' 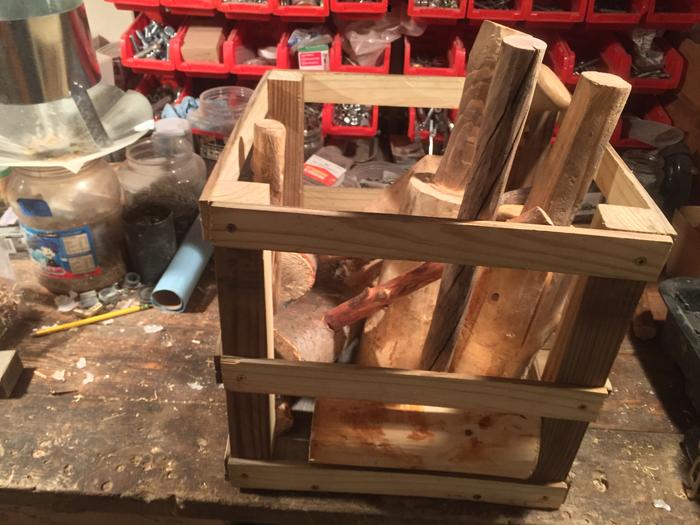 posted 1 year ago
Approved BB submission
These tiny clothes are not so tiny anymore, and they're out of control!

Time for a box.

I have a ton of these modular ikea shelves, and the cube inside dimension is nominally 13"w x 13"h x 15"d. My hope is to make more than a few of these, and improve the design each time.

Since this is storing clothes, I'm using cedar, some cedar 1x2 for the frame, and some 1x6 tonge & groove for the sides.

posted 1 year ago
Approved BB submission
I needed a nesting box, so I made one.

I certify this BB Complete! Enjoy your new Air Badge in Dimensional Woodworking!

posted 1 year ago
Approved BB submission
I made a crate.  There is a very specific purpose for it.  I am testing a concept I've designed for an affordable, double-paned earthbag window.  To do this properly I need to situate one side of the window exposed to the outdoors and one side exposed to the indoors as if it were in a real earthbag home.  The only way I can do that is to replace one of the existing windows in my home with this test ADEW.  But the size of the earthbag window and the size of the existing window are not the same.  So I made this crate.  It is the right size to fit into my existing window frame once I remove the window.  Then I can create a mini-earthbag wall inside it, thereby creating what I hope is a realistic test of the window.

The wood is all scrap 2x4 and 4x4 from outside.  There is some fabulous pink ribbon in the picture but I assure you no glue, paint or glitter was used in the construction of this crate.  Just wood and nails. 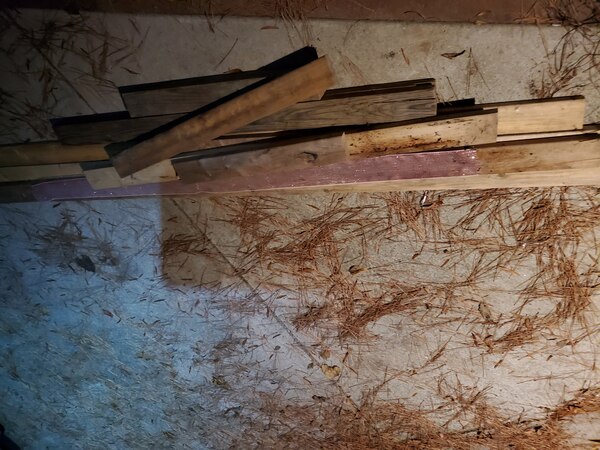 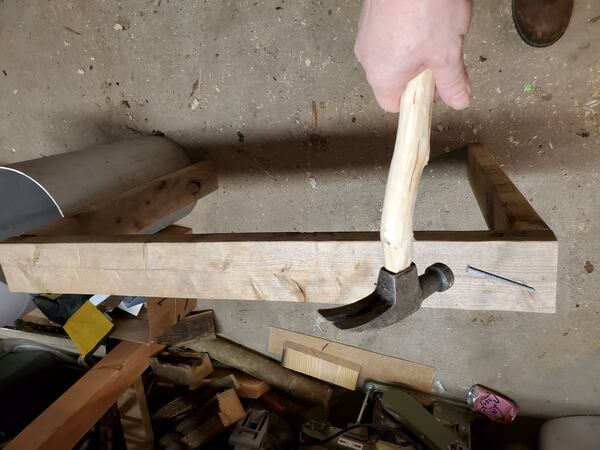 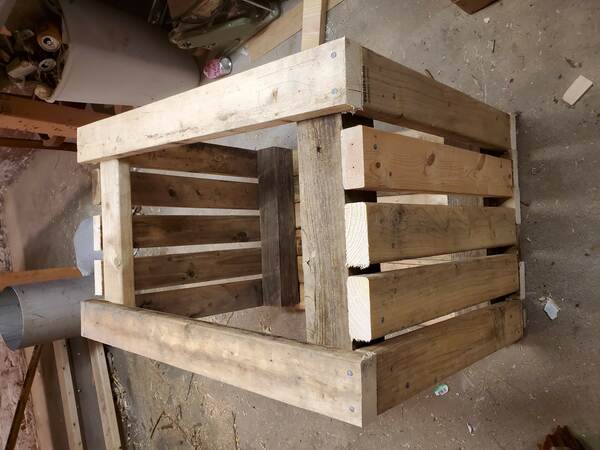 This last image shows the steel pipe I am embedding in the earthbags, which will be cradled in the center of this crate.  Boot for scale. 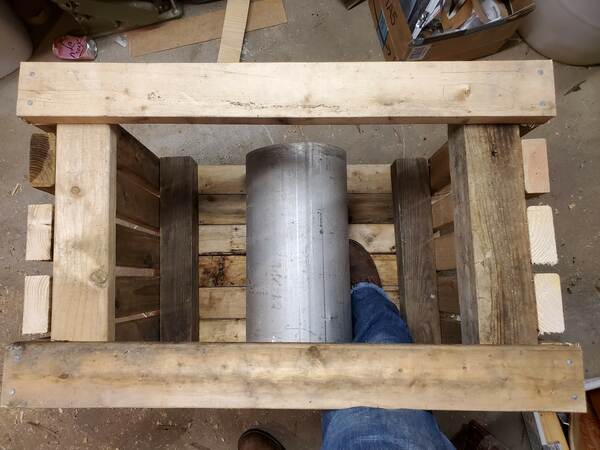 posted 9 months ago
Approved BB submission
Did I admit I'm lousy at following instructions? I'll move this to Oddball if building a box to hold punky wood, dead chickens, biochar, finished compost and plant roots (the plant stems and leaves will stick out the top) doesn't count, but it *is* built out of recycled dimensional lumber, mostly recycled nails, and home made corner brackets.

Step One isn't really shown, but it involved disassembling a bunch of pallets to get flats for infilling other pallets and 2x4's for filling edges. It was a lot of work, and I only chose "HT" for Heat treated pallets.
Step Two was to start infilling gaps in skids:

The gap on the left side was just as big as the one still showing on the right.
I had scored four 6 ft long by ~30 inch tall skids. Two for this crate, and I will make a second matching one. 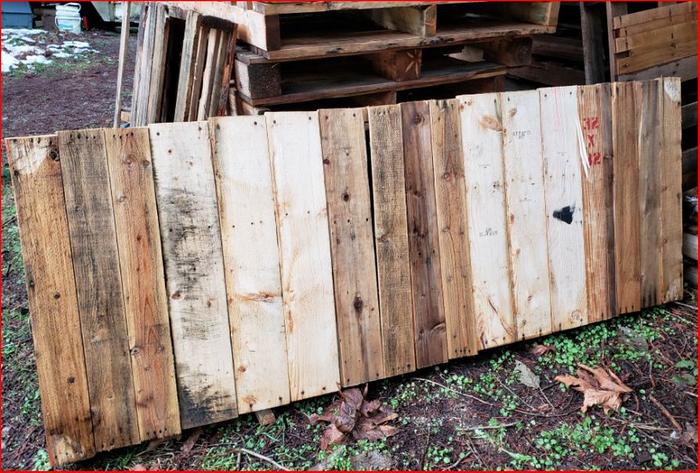 This shows the first side finished. 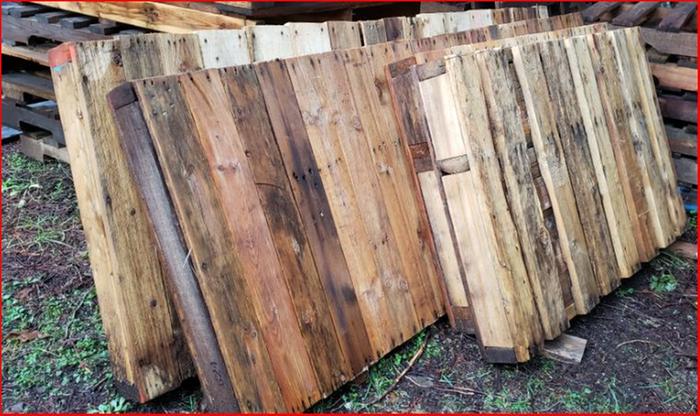 This shows the two 6 ft sides and the two 4 ft sides for the width. The four foot sides had to be shortened to 30 inches from the more typical 40 inch pallet size. After cutting them off to size with a skill saw, I fit a salvaged 2x4 into the gap between the existing flats and then filled in any gaps. The ends tended to have a bunch of narrow gaps, so I was going around to my stash of parts looking for a flat that was just the right width. You can also see the 2x4's that I had to fit into the gap between the front and the back of the skid at the "sides". This serves both to keep the dirt from falling out, and to allow me to fasten the edges of the panels together with my brackets. 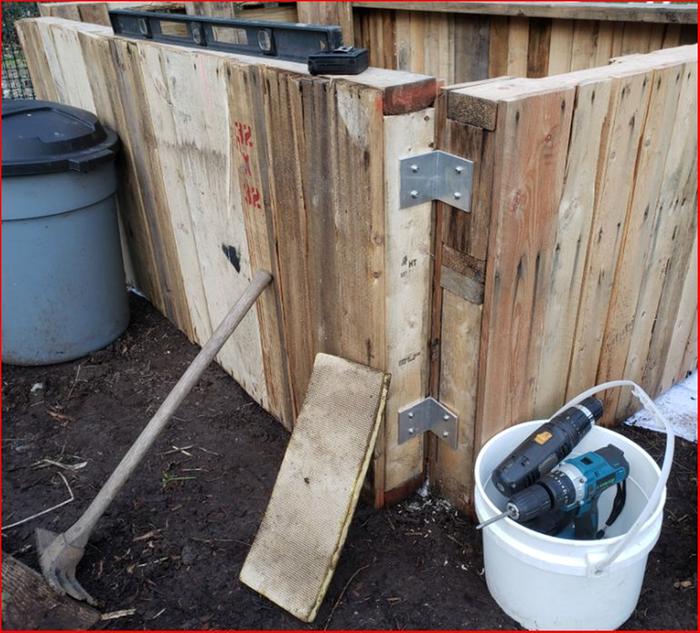 This shows the aluminum brackets and the tools I used to level and screw around with. The small mattock was strategically place to hold that panel against the end wall while I got the bracket installed. My friend Pythagoras helped me get the box reasonably square and the level helped both vertically and horizontally, however it is *not* fine furniture, so "good enough" was the goal. 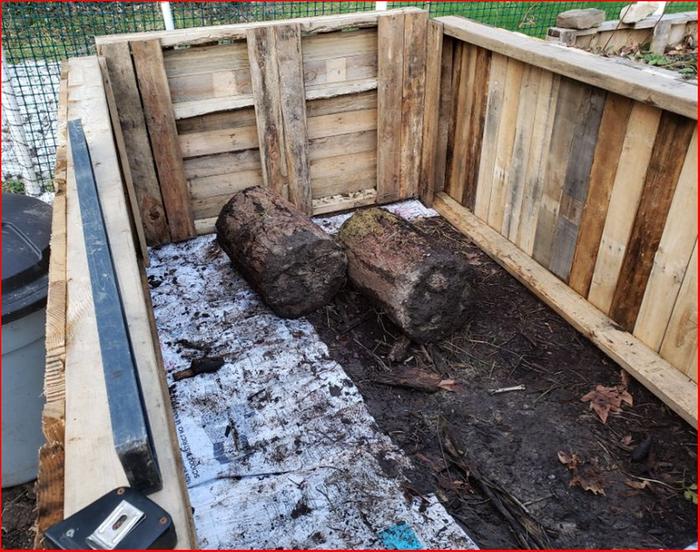 Here is an inside view with two chunks of wood already inside. It will take a *lot* of everything mentioned to fill it, but I'd like to to have some time to settle and then get topped up before spring planting!
The long term goal is that I want to be able to plant some annual veggies, or short-lived perennials despite getting older and be able to pick them easily. This bed is solid! I can lean on it, and sit on the edge and the amount of kneeling I can do is decreasing gradually. Things like tomatoes, bush beans, carrots etc. I want lots of wood in the bottom to hold water for our dry summers.

posted 5 months ago
BB submission flagged incomplete
I decided I needed a generic box of holding for the shop. Basically a place to temporarily hold things, or carry things around. 14" x 14" x 14" felt right, so that is what I decided to go with. I had some old bed rails (i ended up using 4 total) that I used for the sides, and an offcut that I used for the corners and bottom. The bed rails had some old existing paint on the edges, but no paint was used during construction, and nails were the only thing used to hold it together. All in all, not the prettiest thing, but it's functional.
Wood.jpg
Cut.jpg
Sides.jpg
Finished.jpg

"All we have to decide is what to do with the time that is given to us."

Someone flagged this submission as not complete.
BBV price: 1
Note: Sorry, the "no paint" rule applies to old paint on upcycled wood as well.

posted 5 months ago
Approved BB submission
So for my Box of Holding Mark II I've sourced all shiny new wood. I made this one 12x12x14 as my other one ended up being just a bit too big to tuck away nice. Once again only nails were used to hold it all together.
Wood.jpg
Cut.jpg
Assembly.jpg
Done.jpg

"All we have to decide is what to do with the time that is given to us."

Someone approved this submission.
Note: Lovely! I hope it does all the holding you want it to.

posted 2 months ago
Approved BB submission
The purpose of my crate is to serve as a compost-sifter for our community compost bins.  I use it to return chunky, carbon-rich and unfinished material from the finishing bin to the deposit bin, and remove gick.  I was super happy today walking to the garden, as I saw a neighbor using it!  Success!  I took that as a sign to go ahead and submit this post here on the forum.